In the Playground of a Master Alchemist

In the Playground of a Master Alchemist

Playful and provocative, whimsical and ironic - these are some adjectives that might come to mind when viewing a work by András Böröcz. Throughout his career, Böröcz's remarkably flexible imagination has fuelled the creation of sculptures, films, performance art and collaborative art books. Born in Hungary, Böröcz graduated from the Hungarian Academy of Fine Arts in Budapest in 1981, where he majored in painting. After a year of postgraduate work at the academy, Böröcz set off to discover the extent of his creative potential. Over the years, he has expanded his range and now, the stage upon which this artist performs is, indeed, vast.

A late fall exhibit of Böröcz's work at the Adam Baumgold Gallery in New York is small, but confirms the artist's reputation as a wizard of artistic alchemy. The labels 'art,' 'craft', 'sculpture' and 'drawing' seem beside the point of Böröcz's work because it defies comparison and defines itself. Gallery Director Adam Baumgold said of his first impression of Böröcz's pencil sculpture boxes, 'I first encountered his work from another exhibition he was in that compared his work with Saul Steinberg. I was intrigued when I saw these tall carved pencil figures that were unlike any work that I had seen before'.

The show includes 11 sculpture boxes, each holding a miniature world crafted from pencils (wood, graphite and rubber erasers) and 24 drawings from Böröcz's 'Home Sweet Home (The Outhouse Drawings)' series. For those unfamiliar with the artist, the show will introduce certain themes and symbols that have been important to Böröcz since he began working with pencils more than 16 years ago. Such personal icons as dominoes, chimneys, barrels, outhouses and games figure prominently in these boxes and drawings, which were created in 2006. New to his visual vocabulary is the cactus with graphite thorns (sharpened pencil points) and variously sized characters with torsos fashioned from dominoes. The manner in which the artist plays with proportion and scale is indicative of his overall approach to art: improvisation, juxtaposition and unexpected imagery. The box sculptures are settings for miniature dramas. Although the tableaux are static, they can be read as acts in the human story.

Clearly, there is an element of performance pervading Böröcz's work, which includes film. Drawing on an Eastern European tradition with roots in Jewish folk culture and revived earlier in the 20th century by avant-garde artists, and influenced by contemporary developments in performance art, Böröcz and a friend from art school, László Révész, began a collaboration that lasted more than a decade after they graduated. 'I made performance art for 12 years, first in Budapest, then internationally,' Böröcz explained. 'I worked with a partner, László Révész, and we created multimedia performance art, writing the stories, making the props and scenery, acting, etc. This included fake documentary, animation and films. So my background is well grounded in performance. These boxes for me are scenarios - with created characters, some the same as my earlier performances.' But Böröcz's work is much more than an exercise in creative play. His highly personal imagery forms a gateway to universal questions of purpose, identity, inter- and intrapersonal relations, as well as the life and role of the artist in community.

At first drawn in by the intricacy of the craftsmanship required for such fine detail on such a small scale, viewers will find within each sculpture box a fully realised world. With a single and singular medium - the pencil serving as both tool and material - Böröcz realises multiple scenarios. The floors of rooms appear to be made of cork and consist of small sections of round pencils. The walls are longer lengths of pencils stacked together. (Take note of the type on the pencils, which reveals their international origins.) Large and small figures play their roles on these stages. In 'Cactus plays Dominoes', for example, a large potted cactus made of wood and graphite points 'sits' on a chair. The cactus figure plays a game with a much smaller figure, whose torso is a domino. While the large figure seems to dominate, the small one considers the game from a perch on the game table. Two other small figures are on the floor underneath the table, surrounded by fallen dominoes.

The life of the artist and the nature of relationships are explored in 'Model with Cactus'. The eraser-capped pencil man/artist sits sketching a model, whose back is toward him. She sits before a mirror with a cactus on her lap. On the walls are tiny pencil drawings, apparently other works by this artist.1 The tiny drawings are filled with the imagery that echoes throughout Böröcz's work; individually and as a body, the work leaves the impression that the world Böröcz has created is one he knows well and lives within.

In the drawings that make up 'Home Sweet Home (The Outhouse Drawings)', Böröcz has fashioned another realm with its own inner workings and logic. The anthropomorphic outhouses in these drawings engage in mostly mundane human activities that make up everyday life. The down-to-earth subject matter is strangely endearing in its absurdity. For instance, one drawing shows an outhouse couple sitting in rocking chairs in front of a television. The woman is knitting, while the man reads a newspaper. Is this really 'Home Sweet Home', a scene from a long-married couple's later years of comfort and stability? Perhaps, but on the television screen a murder has been committed and it might easily be an equally familiar tale of domestic violence.

Similarly jarring are scenes of a young outhouse family with small child and a baby in a carriage, three outhouses enjoying themselves on a swing and see-saw and a class of outhouses at a graduation ceremony when juxtaposed with drawings of outhouses going to war as tanks and an outhouse marooned on a small deserted island adrift on the sea.

The current show is Böröcz's seventh at Adam Baumgold. The gallery first exhibited Böröcz's work in 1996. During the past decade, the gallery has remained committed to exhibiting the artist's work, including some of the books in which Böröcz collaborated with his wife, Robbin Ami Silverberg. The couple live in Greenpoint, Brooklyn. In 1987, Böröcz moved to a loft on Dobbin Street in Greenpoint, where Silverberg lived and worked making paper and handmade books. The two did not meet until two years later, when Böröcz attempted to deliver some magazines addressed to Silverberg but left at her door. At the time, Böröcz was new to the country and spoke little English. Still, according to Silverberg, when she saw some of his sculptures she felt they shared a certain understanding. In a charming announcement for their wedding, she was quoted as saying, 'He's a pencil man, and I'm a paper woman'.2 The couple chose to have a traditional Jewish wedding, with a twist, of course; the twin themes of pencil and paper were evident in the witty details, which included a paper chuppa with their hand prints and a paper runner with intersecting lines made of crushed eggshells, pencil graphite and tea leaves, created as a reminded of the couple's coming together in marriage.

Silverberg's Dobbin Mills is the site of her paper-making operation, while Dobbin Books publishes collaborative efforts between artists in different media. Baumgold has shown Lipton: The Gallows Book, a strangely humorous look at the similarities between Joseph Stalin and Sir Thomas Lipton, founder of the Lipton tea business; and Bread Head Fables, which commemorates the life and subsequent martyrdom of Father Jerzy Popieluszko (1947-84), a Roman Catholic priest who lived in Poland. The priest was kidnapped in 1984 by the Polish police and later murdered. A monument to his memory was erected in Greenpoint's Popieluszko Square in 1990 but was vandalised by local Polish communists, who broke off its head. This act - and the ever-present pigeons feeding off bread in the square - spurred Böröcz to carve heads from bread. The sculptures were photographed in the square for the book, which was produced in an edition of three, with one proof. The work consists of a box containing a four-part backdrop and a series of 22 framed photographs of the sculptures and their setting. Looking at the book is a participatory experience; viewers are required to assemble a diorama that tells the story.

Participation is central to all of Böröcz's work. Viewers are invited, in the act of looking, to participate in the stories he tells. Encountering this artist's work is like entering a playground, where the imagination can roam freely. Set aside an afternoon - and then go straight to the Adam Baumgold Gallery to roam in the playground of a master.

Footnotes
1. The tiny drawings are done with a magnifying lens, which the artist also uses to detail the faces of the carved figures.
2. 'Vows; Robbin Silverberg, András Böröcz'. New York Times, 10 September 1995. 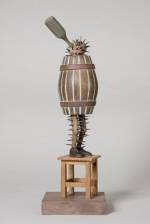 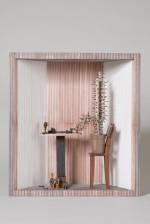 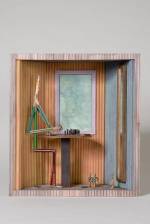 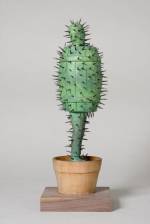