by Andrew Lambirth.Thames and Hudson, London; 2002.

The new book on Ken Kiff joins Thames and Hudson’s list of finely produced, readable monographs. Lambirth’s monograph began as a collaborative exercise between author and subject in that Kiff’s spoken and written words were to form a significant part of the text. Lambirth is an experienced interviewer of artists (for the National Sound Archive, British Library) and Kiff was serious, articulate and informed. His meticulous approach to writing, communications and teaching corresponded to his professional and dedicated approach to art-making.

Kiff was involved in the selection of paintings and was keen to be involved with the design of the book. He would have been pleased with the result, although the cover does not do justice to the strength of his work either in terms of content or formal rigour. Kiff became unwell in the course of this book’s preparation and died a year later in January 2000 of cancer, aged only 65. His absence is felt in all aspects of the book but it is nonetheless a fitting tribute to his life’s work, and reproduces many works for the first time. The Marlborough ‘Retrospectives’ of painting and graphic work were also a fitting tribute and both catalogues were finely produced. Lambirth notes that unlike much art produced these days at speed, Kiff’s work was a product of slowness.

This new publication is the first illustrated monograph and thus enables one to appreciate the great variety of work and the range of emotions. ‘Man Cutting Image’, 1964, in pastel and then the same title in tempera on board, 1965–71, show Kiff’s ability to sustain concentration for a theme or image over many years. The works are at once mysterious, moving and wonderful. They are also sad. The childlike character of so many works helps to illuminate ordinary experiences into a magical celebration. ‘’That painting has to do with processes of healing and integration, that may entail a recovery of the child in oneself – such convictions came to Kiff very much at first hand, even if reinforced by his later Jungian analysis’.1

Kiff was reserved and serious and his work often created the same effect as Paul Klee. Ken Kiff stated, ‘The work of art is above all a process of creation; it is never experienced as a mere product’. And Klee in a similar vein, ‘Nothing can be rushed. It must grow, it should grow of itself, and if the time ever comes for that work – then so much the better’.2 Central to Kiff’s art, is a series of 200 works (25 are reproduced in Lambirth’s book) – acrylic on paper – entitled ‘The Sequence’. Timothy Hyman states,

Kiff’s amorphous characters have an accidental quality and yet they have a soundness of being, a sureness in relation to the picture space. This is achieved by Kiff’s rigorous draughtsmanship and organisation of the picture plane. Among the most impressive works are the etchings and drypoints of the 1990s: ‘Walking Past Rocks and Flowers’, 1995, (five states), ‘Clown’, 1996–99, and ‘Ladder’, 1994. Some of Kiff’s titles are very amusing: ‘Fishing one Sunday, he caught Old Nick’,4 shows a fabulous, bemused mythological beast on the end of a fishing line. ‘The Selection Committee’s Fear of the Irrational’5 of the 1980s is a brilliant parody of those who could not perhaps accommodate Kiff’s imagery in the artworld. Of printmaking Kiff stated,

From 1991 until October 1993 Kiff was Artist in Residence at the National Gallery, London. There, he enjoyed access to the collections. Neil McGregor, who organised the outstanding, ‘Encounters’, exhibition in 2000 (see review on this website) referred to Kiff’s studies after Patenier and Pisanello as constituting ‘a revisiting of a painted world which I thought I knew and which I now see to be even richer than I had guessed’.6 Kiff’s response to the Old Masters, the dialogue between modern and classical was, as one might expect, highly personal. He began some 50 new works during his residency (plus monoprints and notebook drawings make 100). Lambirth states, ‘Kiff’s attitude of mind, essentially modernist, brought a breath of fresh air into the historic galleries’.

Kiff was particularly interested in Monet’s ‘Waterlilies’ and van Gogh’s ‘Sunflowers’, but he also looked at works by Rubens, Duccio, Pisanello, Bellini and others. The charcoal and pastel works ‘After Patenier’, 1992–93, are exceptional and dramatic works. Kiff himself felt with hindsight that he had ‘tried too hard’ at the National Gallery and that he had paid too high a price in terms of nervous strain and was extremely critical of them. Many remained unfinished, and yet works such as ‘From Crivelli’ (unfinished), 1992–93 and ‘Religious Presence’ (after Duccio, ‘The Transfiguration’) 1992–93, possess a most dramatic and passionate response both to the external world of art and the inner turmoil of the artist’s own perceptions.

Kiff's enduring optimism was expressed when he stated, 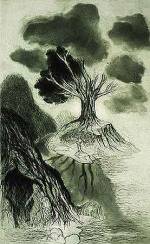