This fascinating book is as much about the history of Stalinist Russia as it is about Boris Iofan, the architect whose grand buildings defined the era, yet whose work was so closely tied to the dictator’s whims 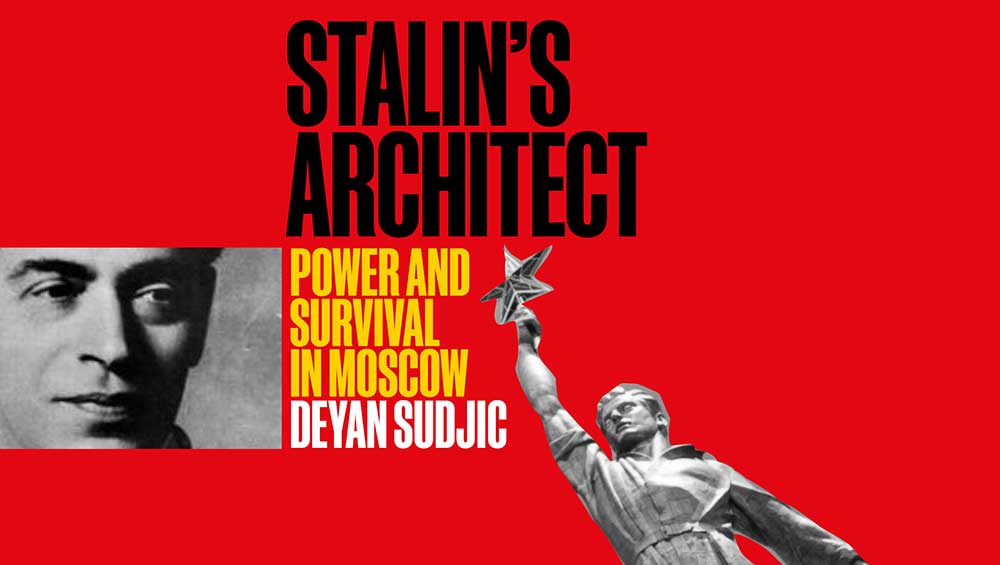 When it came to Soviet architecture, Ukrainian born architect Boris Iofan (1891-1976) was Joseph Stalin’s right-hand man. As the most prominent of Stalin’s architects, “the patronage of a murderous dictator came at serious personal risk” to Iofan, as we learn in this new book about him. He was talented and strategic, and his politically charged buildings came to define Stalinist architecture. Perhaps his most significant achievement was the House on the Embankment, a city within a city for the Soviet elite just across the Moskva River from the Kremlin. Yet there was much more to Iofan – the Barvikha sanatorium, Baumanskaya metro station and many other buildings testify to that. 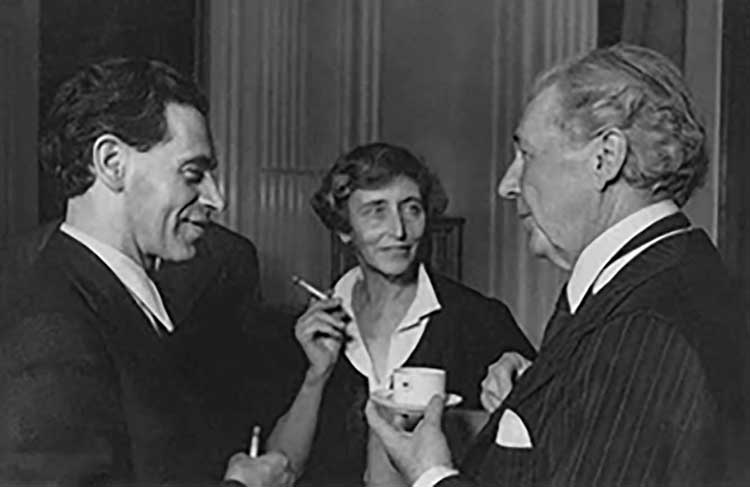 Frank Lloyd Wright with Olga and Boris Iofan at a dinner during the first congress of the Soviet Academy of Architecture in June 1937. Their relationship continued during the war when Iofan joined the Jewish Anti-Fascist Committee, and appealed to Wright for help for its fundraising campaign. © Courtesy Ekaterina Makarova.

In Stalin’s Architect: Power and Survival in Moscow, Deyan Sudjic conveys Iofan’s story in captivating fashion. The 100 photographs and drawings that accompany Sudjic’s text evoke something of the nature of the Stalinist era and the oppressive atmosphere in which Iofan lived and worked. Reading this cultural biography, you learn as much about Jewish life in Odessa in the late 19th and early 20th century, and the later strictures of Stalinist Russia, as you do about Iofan’s architectural prowess, so the book certainly has a broader interest too. Sudjic paints a chaotic picture of Odessa in the years around 1900, noting how war and communism ruined its once distinctive culture. 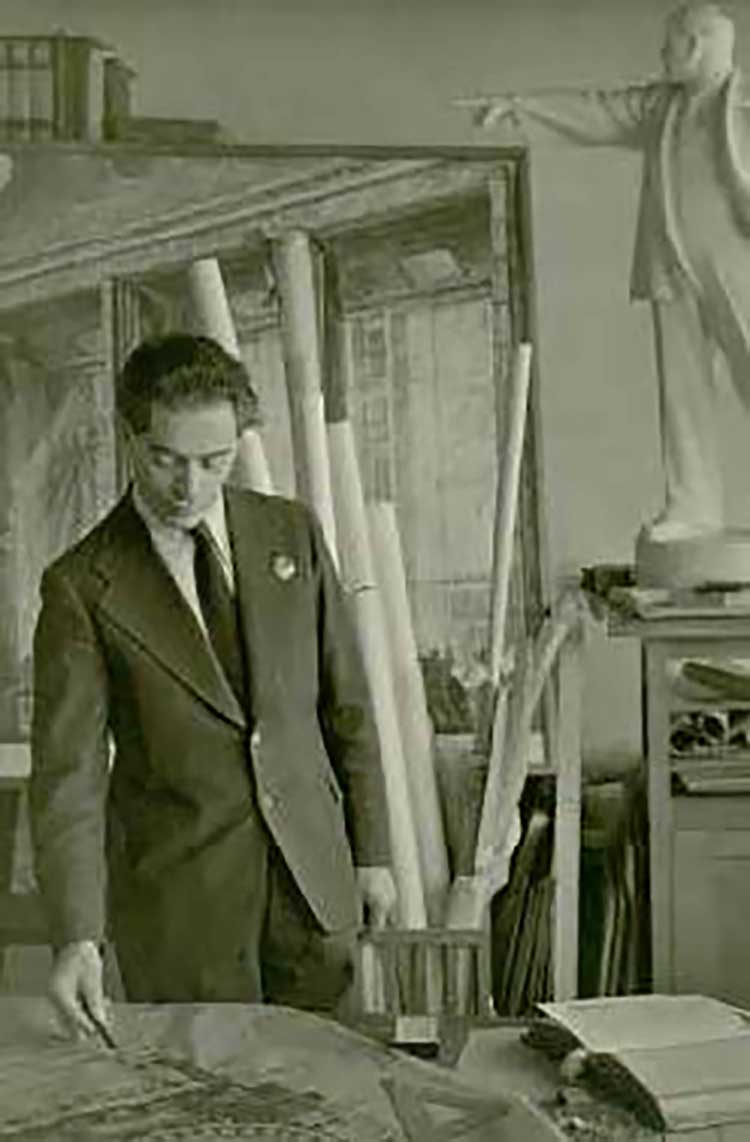 Boris Iofan in his studio in Moscow, with a study for a representation of Lenin, planned for the top of the Palace of the Soviets. © Shchusev Museum of Architecture, Moscow.

Iofan left for Rome in 1914 and relished the opportunity to immerse himself at first hand in the classicist background to his architectural education in Odessa. He studied at the Istituto Superiore di Belle Arti, remaining in Italy after he graduated in 1916, initially working in a neoclassical style. His first independent architectural commission was the Ambrogi tomb in Rome’s Verano cemetery. The details of his circle of friends at this time, both Italian and Russian, is fascinating and helps to illuminate his role in the complex relations between Italy and the Soviet Union in the early 1920s. 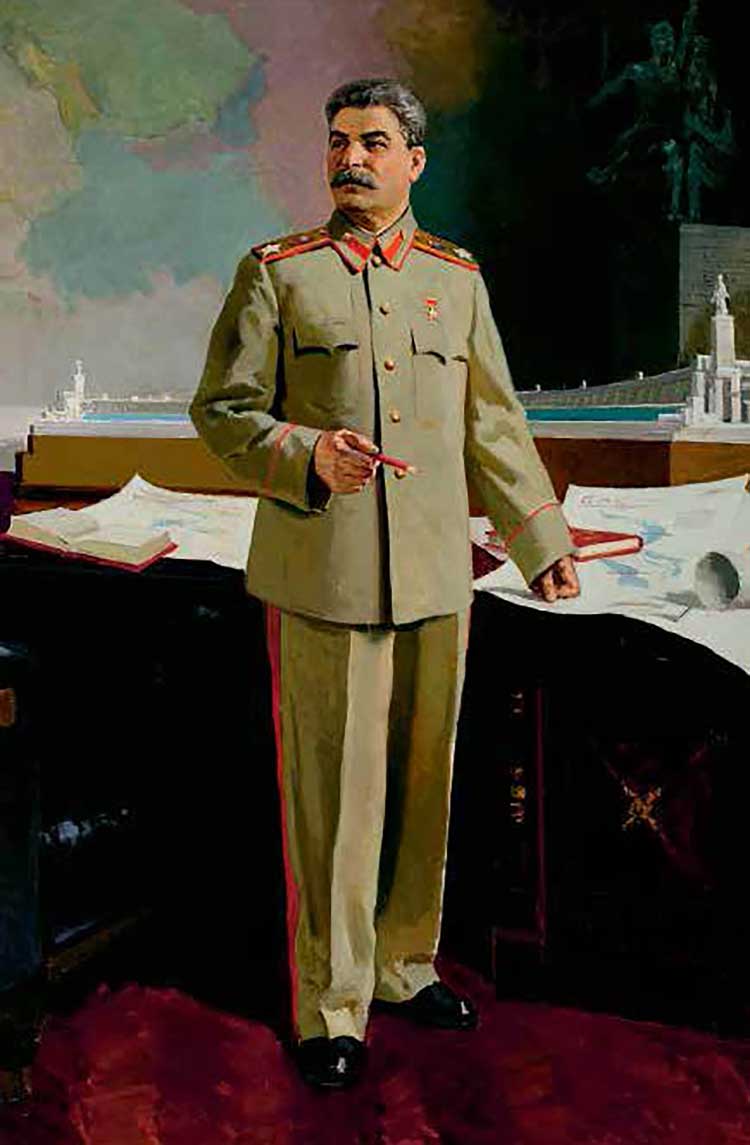 Stalin, with a model of the Moscow–Volga canal, portrayed as the great architect of socialism by Aleksandr Bubnov in 1940. © Album/Alamy Stock Photo.

When Iofan returned to Russia in the mid-1920s he became a member of the Communist party and played a significant part in the building of a socialist future. With the pressing need for housing, he soon had seven major architectural projects completed or ongoing within five years of establishing his practice in Moscow. Iofan’s projects from this period all took a different approach, as if he were exploring what Soviet state architecture could be – traditional or constructivist, modernist or neoclassical. By this time, he had already realised one of his most imposing works, the House on the Embankment, a would-be utopian complex of more than 500 apartments, complete with exercise facilities, a library, a clinic, a restaurant and shooting range, built over several years and finished in 1931. 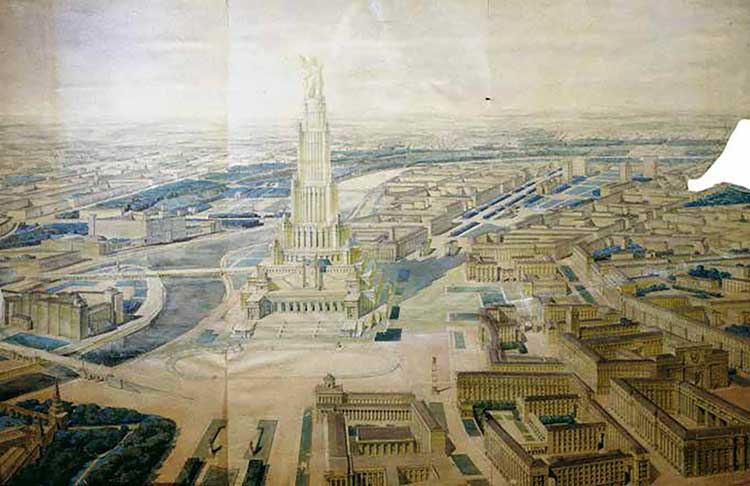 The 1939 version of the design for the Palace of the Soviets. Iofan’s House on the Embankment is shown just across the river, with one of the Kremlin’s spires. © Fine Art Images/Heritage Images/Getty Images.

Iofan designed the Soviet pavilion for the 1937 Paris Exposition, echoing the Odessa steps he knew as a child. This was a hugely popular event visited by more than 30 million people over the course of six months. The Paris design was reprised for the New York World’s Fair in 1939, but on a larger site, both of these projects helping to bring him to wider attention. 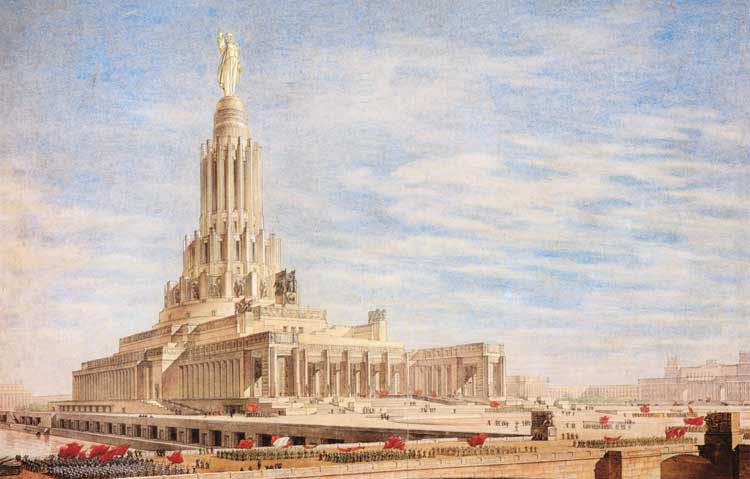 One of Iofan’s many designs for the unbuilt Palace of the Soviets. © Album / Alamy Stock Photo.

Plans for the monumental Palace of the Soviets were fraught with difficulty for Iofan. The building that was intended as the symbolic heart of the Soviet Union was hampered by Stalin’s demand for the inclusion of an enormous representation of Lenin, as well as his decisions on its size and location, which required the difficult demolition of a cathedral. A series of architectural competitions were mounted (1931-33) for a design for the palace. When Iofan was appointed chief architect, Stalin insisted on major changes to his design and appointed other architects to work alongside him, further impeding his plans. While initial foundations and the steel structure were begun, the project was eventually abandoned. The Palace of the Soviets became Iofan’s most famous failure. 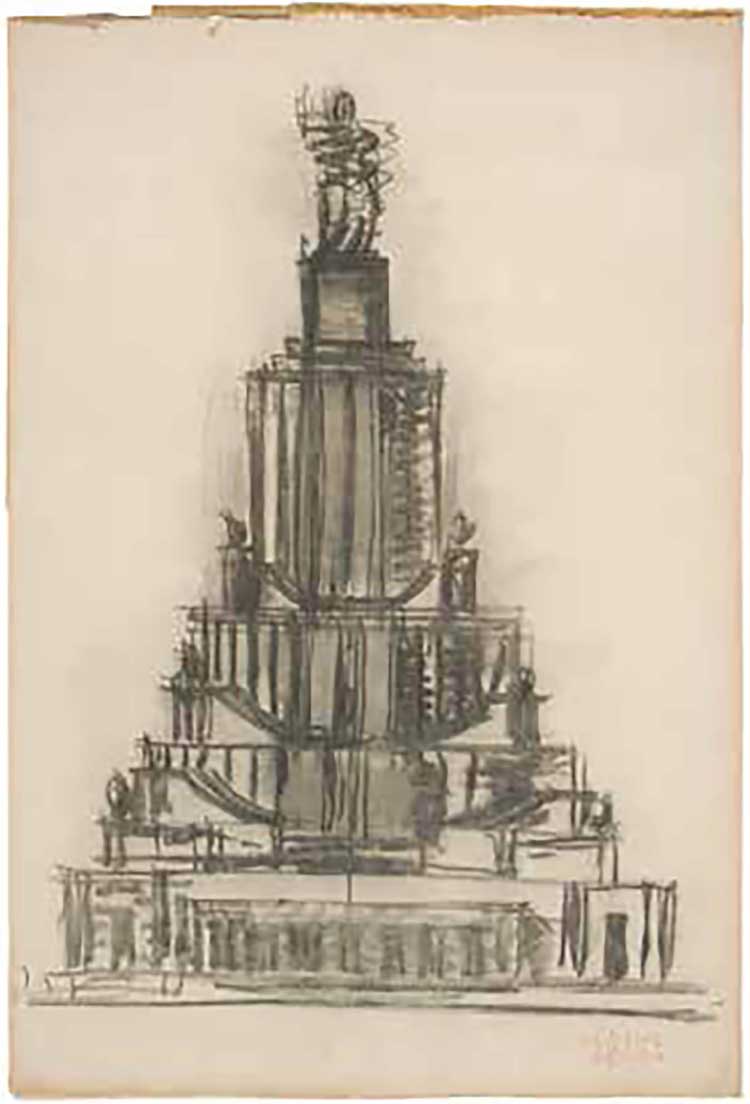 Page from Iofan’s sketchbook, with a revised version of the tower for the Palace of the Soviets, reducing its height in attempts to lower costs and simplify the building process. © Alex Lachman Gallery. Photo: Simon Pask.

When the Soviet Union came under German fire in 1941, and Moscow was under threat, Iofan was given the job of protecting the city with camouflage. Using paint, plywood and netting, Iofan made the city unrecognisable from the air. When cities were destroyed, Iofan was later involved in their rebuilding and advanced a strategy for cultural renewal. In illustrations from 1944, his plans for Novorossiysk, for instance, show Italian and Venetian influences. As the war ended, Iofan’s status seemed secure and his future assured. Four years on, his professional reputation was fading, not least because of the failing Palace of the Soviets project, and by the spring of 1948 he was losing favour with the party too. He had worked closely with Stalin for 25 years, but when Nikita Khrushchev came to power, he was unimpressed with Iofan. It wasn’t until Khrushchev was removed from power in 1964 that Iofan earned his last two major commissions. 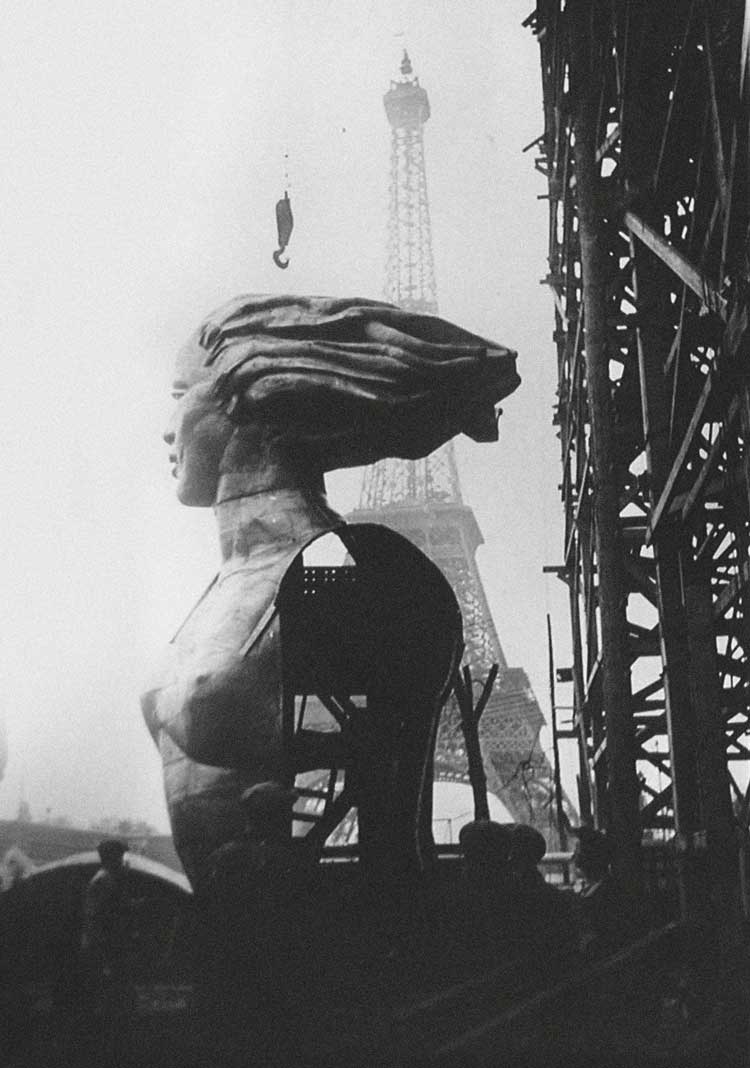 Iofan’s Soviet Pavilion under construction for the Paris Expo of 1937, with Vera Mukhina’s huge sculpture as its highpoint. © Heritage Images/Fine Art Images/Getty Images.

Iofan’s story is a tale of the rise and fall of an architectural career. Ultimately, that career was firmly shaped by the political power of Stalin. Sudjic’s account of Iofan’s life is set within the political, economic and cultural context of Soviet Russia, and is all the richer for that context. In fact, it could not be properly understood without it. Iofan’s training in Odessa, St Petersburg and Italy is given its rightful importance in establishing an architectural aesthetic that embraced traditional and constructivist, modernist and neoclassical. At the same time, he had to accommodate Stalin’s demands that often compromised his designs. We might think that Iofan simply took advantage of his working relationship with Stalin to advance his own career. Sudjic’s book shows it was not quite that straightforward.

• Stalin’s Architect: Power and Survival in Moscow by Deyan Sudjic is published by Thames & Hudson, price £30. 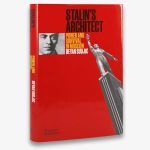 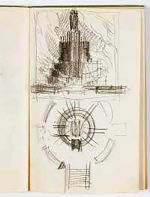 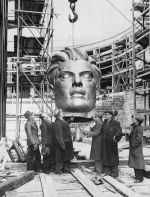