Ken Kiff: The Hill of Dreams

Ken Kiff: The Hill of Dreams

In the Hill of Dreams, which includes encaustic paintings, monotypes, lithographs, etchings, woodcut and monoprint, Ken Kiff is revealed as an artist’s artist, creating images to draw the viewer in, as if to partake in his adventure

Opening just days before the publication of Painting Now,1 a survey of present-day painting, this exhibition, at Marlborough Fine Art, of the work of Ken Kiff (1935-2001) is most timely. An adequate survey of contemporary painting requires an appraisal of complex and wide-ranging milieu that informs the production of art of the past 40 years. The preoccupation with postmodern theory somewhat compromised the appraisal of independent artists such as Kiff, or those working in an expressionistic mode in the 21st century, such as John Bellany. Of particular importance at the height of conceptual art’s ascendancy was the return of figuration in the 1980s in Germany – Georg Baselitz, Sigmar Polke, Jörg Immendorff, AR Penck and Anselm Kiefer – and in Italy – Sandro Chia, Enzo Cucchi, Francesco Clemente and Mimmo Paladino. In the seminal exhibition of British painting of the 1980s: The New British Painting2 (1988), selected to tour the US, the works that took centre stage were the large landscapes of Christopher Le Brun and Thérèse Oulton, the narrative works of the Glaswegian artists Peter Howson, Steven Campbell, Adrian Wiszniewski and Ken Currie, and the personal mythologies of Eileen Cooper, Paula Rego and Andrzej Jackowski. Included, too, were works by Frank Auerbach, Lucian Freud and John Walker. Characterised by large and overtly dramatic themes, this exhibition nonetheless acknowledged the importance of Kiff, with a watercolour painting: Large Face above Water (1987) measuring just 11 x 8 inches.

Also in 1988, Kiff’s exhibition at Fischer Fine Art in King Street, St James’s was my first experience of his work at firsthand; it was the exquisite colour he employed, the understated poetic human encounters with nature, and the wisdom expressed through dream-like images that resonate to this day. He struck me as a brave artist and a serious, well-informed man who, at times, produced hundreds of works on a single theme. Often reluctant to exhibit works because he was uncertain whether or not they were complete, the result is an abundance of superb work that remains available 14 years after his death, for Marlborough Fine Art to exhibit.

Kiff’s untimely death at the age of 65 robbed the art world of many years of productive work, and it is interesting to consider how he might have weathered the fickleness of art taste and market forces had he lived longer. What is certain, however, is that his works, which possessed a universality and remarkable skill, would have continued to evoke deep emotional and spiritual responses. There has always been a thread within the art world, running like a backstory to assuage the grand gesture and the predilection for commercially oriented large works. Artists who have worked on a small-scale, from William Blake to Rego, have always made their presence felt. Often making work to illustrate texts, or on a more intimate scale for private collections, there is a strong tradition of such artists. Paul Klee is one of the most influential artists and teachers of the 20th century, as the Tate Modern exhibition Paul Klee: Making Visible (16 October 2013 – 9 March 2014) revealed. The experienceofvisiting the show wasmore akin to reading a book or a musical score, and the large gallery spaces were potentially problematic. The jewel-like works were hung on vast walls with low light, prompting the viewer to focus quite differently on each of them. The same can be said for the experience of Kiff’s works: his vibrant colour, the contrasts he established through exquisite drawn line and painted areas of the surface; his ability to capture ephemeral moments of the realisation of a glance, the remembrance of things past. As Klee stated in 1920: “Art does not reproduce the visible; rather, it makes visible.” Like Klee, Kiff shared the rare ability to evoke memories and emotions with an economy of means, and for ordinary experiences to resonate with importance. His experience of Jungian psychotherapy gave him the confidence to draw on images from his subconscious.

Kiff had a great passion for the materials of art and he loved to develop the potential of a range of media: pastel, charcoal, acrylic on board and oil on canvas. He often sanded back painted areas in order to start again, and in the process established further variation to the surface quality. In The Hill of Dreams exhibition there are encaustic paintings, monotypes, lithographs, etchings and certain combinations such as woodcut and monoprint. In this, he is an artist’s artist, for he revels in process, creating images that draw the viewer in, as if to partake in the artist’s adventure.

Kiff’s hills are imaginary and metaphoric. He also uses the hill as a formal device to separate the earthly and the heavenly; the waking moment from the dream. Hills and rivers denote stability and flux and the necessity of opposites: of contemplation and wandering; of candour and knowledge. His stories are never certain; indeed, they are quite open-ended. In Excited Man (undated), a naughty figure with a huge erection dominates the picture plane in an essentially light-hearted image of sexuality. Kiff’s diminutive figure is solitary, like a manikin. At times, he is a caricature, representing the artist himself, making his journey through life where a childlike innocence triumphs. He is Everyman whose travails and ordeals provide a commonality expertly juxtaposed in formal terms with insight and wisdom. The inclusion of a boat in numerous works, such as Coloured Lines: Torrent and Boat (1999) can be seen to represent the voyage of life itself. In literature and art, a ship at sea is often a metaphor for the soul.

The artist’s sensibility had an affinity for all living creatures: thus he sought to achieve a harmonious relationship with people, animals and, indeed, any form of life. In his own words, he explained: “I like them to be calm, to come together on the way, friendly rather than grotesque … there is not a lot of aggression.”3 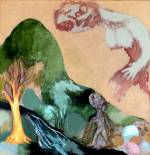 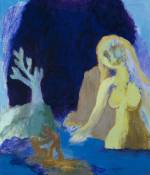 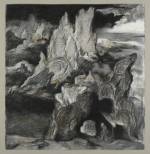 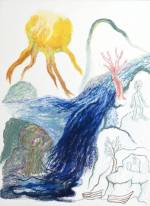