In Focus: Stanley Spencer – A Panorama of Life

In Focus: Stanley Spencer – A Panorama of Life

This bite-size exhibition offers a concise but surprisingly thorough overview of the artist’s life in, and love for, Cookham; his complex personal relationships; and his dedication to depicting everyday domestic life through a religious lens 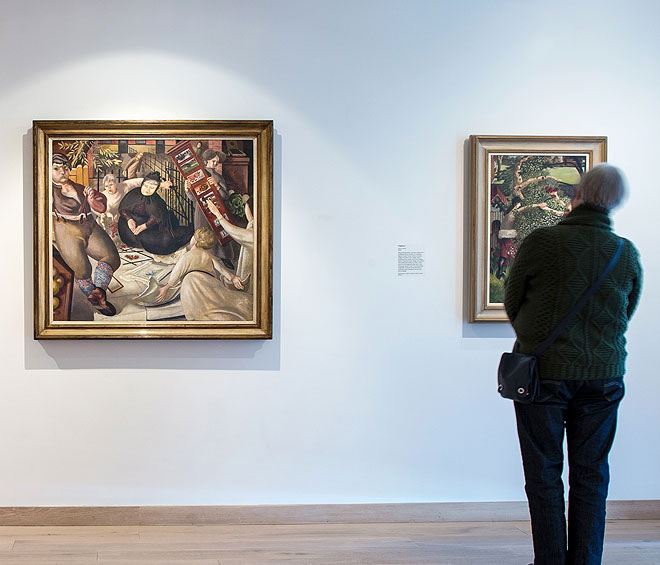 “The small man with twinkling eyes and shaggy grey hair (often wearing his pyjamas under his suit if it was cold) became a familiar sight wandering the lanes of Cookham pushing the old pram in which he carried his canvas and easel.”1

Today, more than half a century after his death, the Berkshire village of Cookham remains synonymous with its best-known former inhabitant, Stanley Spencer (1891-1959), an artist so dedicated to home that he earned the village’s name as his nickname while studying at the Slade (1908-12). Born the eighth of nine surviving children (two further siblings died in infancy) into a close-knit family, Spencer was educated early on at a school set up by his father in their back garden, focusing on reading, music and nature, as well as Bible stories. Spencer attended the local Wesleyan Methodist chapel with his family, and remained enthralled by the Bible throughout his life: much of his painting unites the religious with the secular, the miraculous with the everyday. In 1947, he wrote to his first wife Hilda: “I want to show the relations of the religious life in the secular life, how that all is one religious life.” Another time he said: “I approach heaven through what I find on Earth.”

Spencer’s works are often described as “visionary”, for their placing of religious events in a contemporary Cookham setting, but this is a common artistic trope dating back to early Italian painters, known as the Italian primitives, such as Giotto, Fra Angelico and Botticelli, whose paintings Spencer saw at the National Gallery when he was a student. By the time he had finished his studies, Spencer was one of a number of artists to have become known as the neo-primitives because of their enthusiasm for this style. With a career spanning the first half of the 20th century, Spencer is respected as one of the greatest British artists, and, to mark the 125th anniversary of his birth, a number of international celebrations of his life and work have been taking place throughout 2016. This small, one-room “In Focus” exhibition at the Jerwood Gallery, Hastings, forms part of these events and brings together paintings, drawings and archival material from the Stanley Spencer Gallery in Cookham, with works by Spencer and an artist friend and collaborator, Daphne Charlton (1909-91), from the Jerwood’s own collection. Called A Panorama of Life, it offers a concise but surprisingly thorough overview of Spencer’s life in, and love for, Cookham; his complex personal relationships and marriages; and his dedication to depicting everyday domestic life through a spiritual lens.

Paintings on display include Neighbours (1936), depicting his childhood home, Fernlea, with his sister Annie reaching across the hedge to her cousin, who is standing in the next-door garden with some flowers, and Sarah Tubb and the Heavenly Visitors (1933), which epitomises his conflation of the religious and secular, by showing a scene Spencer recalled from 1910, when the villager Mrs Tubb (modelled here by her granddaughter Sarah) feared that the appearance of Halley’s Comet meant that the end of the world was nigh, and knelt in Cookham high street to pray. Spencer depicts her here being comforted by angels, showing her “emblems of what she is like” and “all those things which she loved”, including postcards of Cookham church.

Other figures from Spencer’s life in Cookham regularly appear in his work, including his and Hilda’s housekeeper, Elsie Munday, who is shown in the pencil sketch Taking in Washing, Elsie(1943-44), collecting stockings from the washing line, with the artist kneeling in the background with his sketchbook. Here, the religious element is embodied by a mysterious Holy Spirit figure holding a basket of pegs.

In 1927, Spencer was commissioned to produce 25 pen-and-ink drawings on domestic and pastoral themes for the Chatto and Windus Almanack. This was the only book he ever illustrated, and two copies, annotated by Spencer himself, are in the Tate Gallery archives. Because of its rare value, Chatto and Windus reissued the almanac in 1983 and two illustrations, for the months of March and April, are on display here. March shows the annual ritual of spring cleaning at Fernlea, the shapes of the oval chair backs mirrored in the shapes of the cleaners’ heads, the vases and the fireplace. The legs of the upturned chairs then become like the stems of the daffodils in the vase. The composition is almost abstracted, with a cubist simplification of the elements to their basic shapes. For April, Spencer’s brother Sydney is drawn standing on a chair cutting a hedge. Sydney had planned to take Holy Orders but was killed in France in 1918 as the last casualty in his battalion before the end of the first world war.

When the second world war broke out in 1939, Spencer was commissioned by the War Artists’ Advisory Committee to paint scenes of the civilian war effort of shipbuilding at Lithgow’s shipyard in Port Glasgow. Looking back, Spencer remembered this period of his life positively. He was captivated by the activities at the port, writing after his first visit: “I hardly know how to tear myself away.” Continuing to express his love for the communal, the works focus on the cooperative spirit of the workers, showing them engaged in everyday tasks such as plumbing, welding, painting and riveting. Unsurprisingly, Spencer saw a form of praise in the ritualistic nature of the shipbuilding work and drew comparisons between the factory floor and a church. The Shipbuilding on the Clyde series went on to comprise eight panel paintings, which cemented Spencer’s reputation. A number of gridded studies are included here, pencil and coloured chalk on paper. Although clearly figurative, as in the almanac illustrations, the shapes of the men, pipes and machines meld and echo one another, almost becoming a pattern.

Another of Spencer’s war paintings, one of his collaborations with Charlton, is Dig for Victory (1940). Pencil and watercolour on paper, it was made as a poster for the village hall while Spencer was staying with Charlton and her husband George in the Gloucestershire village of Leonard Stanley. The background, nevertheless, depicts Cookham, with dragonfly planes circling overhead. The expressive eyes of the girl shown kneeling with a sack of potatoes and a pitchfork radiate fear and anguish.

In 1925, Spencer had married his first wife, Hilda Carline, sister of his friend and fellow artist Richard Carline. Hilda was also an artist, and, for some time, they lived by Hampstead Heath, before moving to Burghclere in Hampshire in 1927, where he made his paintings for the Sandham Memorial Chapel, and then back to Cookham in 1932. Here, Spencer met Patricia Preece, a young and aspiring artist who became his model and muse, and, ultimately led to his divorce from Hilda. Four days after the divorce, he wed Patricia. From the outset, however, their marriage was a failure, never consummated, and Patricia continued to live with her friend (and lover) Dorothy Hepworth, even going on the honeymoon with her while leaving Spencer behind in Cookham.

Hilda remained the love of Spencer’s life and he continued to write letters to her even after her death. This convoluted entanglement led Spencer to make a series of works called Beatitudes of Love, exploring the relationship between husbands and wives. The Beatitudes of Love: Contemplation (1938) is included here, distorted and almost grotesque, with exaggerated, caricaturesque expressions, similar in manner to the satirical paintings of Spencer’s German contemporary George Grosz. For this series, the artist’s concern was firmly on the characters and their relationships to one another, and details of location have been obliterated, rendering the figures everyman and everywoman, representing the lusts and whims of society at large. “I am on the side of the angels and of dirt,” Spencer said, and with his dual concern for spirituality and humanity, this statement is more than borne out across his work as a whole.

Although bite-size, this exhibition, with its focus on Cookham, offers an illustrative overview of both Spencer’s life and work, highlighting just how much his life informed his work – and vice versa. The title, A Panorama of Life, is, therefore, really quite fitting.

Reference
1. From the Stanley Spencer biography at stanleyspencer.org.uk