The UK may be struggling with its identity in a globalised world, but the artists of the past century knew exactly who we were, as seen in this joyous and playfully curated sweep through 20th-century British art 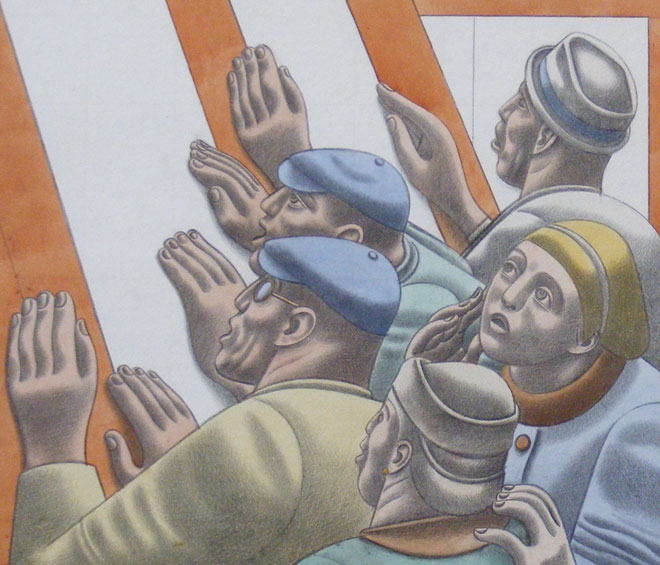 Think of Britain and what comes to mind? Tea, cricket, pubs, flat caps? Or is it coastlines and canals, industrial cities and windswept moors? This exhibition moves seamlessly between all these things and beyond, showcasing a century of artists who celebrated the everyday by seeing humour and beauty in the humdrum. Most of the big names are here: Barbara Hepworth, John Piper, David Hockney, Paul and John Nash, Maggi Hambling, LS Lowry, Bridget Riley, Allen Jones. But there is a conspicuous lack of artists whose careers started later than the 1980s. Perhaps this is because younger artists are not well represented in the Jerwood and Ingram Collections, which have been the source for this exhibition. Still, it is a joyously and playfully curated sweep through 20th-century British art.

We are greeted with an array of melancholy landscapes from the haunted Welsh Farm of Carel Weight (1908-97) to Tristram Hillier’s (1905-83) The Crucifixion (1954). Both touch on the spiritual in different but equally earthy ways. The latter presents the ultimate scene of Christian divinity and suffering as though it were an everyday occurrence. The grassy hillocks at the foot of the cross are strewn with carpenters’ tools and modest clothing. The crowd are moving off, back to town, leaving the Virgin Mary and Mary Magdalene to mourn Christ’s passing. A member of the departing company carries an umbrella, others wear flat caps and woollen trousers. It is a sombre and touching scene, imbued with a quiet sense of loss, all melodrama stripped away.

Stanley Spencer (1891-1959) was the real king of the quotidian and is given a mini exhibition within the larger show. Spencer, perhaps above all others, gazes unflinchingly at ugliness and revels in it. Beatitudes of Love: Contemplation (1937) presents us with middle-aged women in fishnet tights who look like cross-dressing coal miners. But Spencer was not ridiculing these people. When critics accused the figures of being ugly, his response was: “That these figures may not be everyone’s cup of tea is not important … whatever they look like, they are all in all of each others’ lives.” Decades before Lucian Freud, Spencer was tackling the human body with an unflinching eye.

But to characterise 20th-century British art as inward looking would be unfair. The 1960s saw artists turning their attentions state side and embracing the glamour and energy of pop art. UK artists such as Hockney and Gerald Laing moved to California and New York respectively, and soon colour and cool became part of the UK art scene. My Bonnie Lies Over the Ocean (1961) is an etching by a young Hockney in which he explores being a gay British artist in America. The title may refer to a love left in the UK, or Hockney himself, divided by an Atlantic Ocean of rapidly drawn lines. A naively drawn figure, labelled “Dh” perches on top of a skyscraper, triumphantly holding aloft the Stars and Stripes. This work marks the beginning of what would become a lifetime love affair with America.

Century: 100 Modern British Artists delights in the eccentric, the everyday, the surreal and the divine. It is an exhibition with a very British flavour organised and explained to us with chatty enthusiasm by curator James Russell. There are so many dramas lurking within these artworks, stories of self-destructive characters, chance discoveries, bohemian lives, working-class masters. I happily whiled away a morning in the company of these works. And I can recommend taking a moment to look out of the windows that frame the fishing boats behind the gallery, because outside this wonderful building, life, as captured by these artists, is happening now. 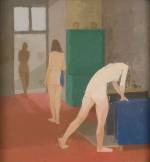 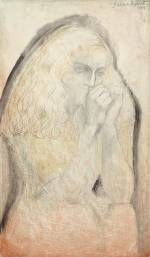 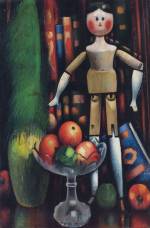 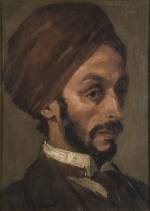