Approaching the vast exhibition at the Centre Pompidou this spring, with waiting times of more than an hour, and rooms packed with people looking closely and intently at the many photographs, films and paintings on show, it is clear that Cartier-Bresson is a much loved figure in the capital of his country.

Highly respected by the people as well as the critics, there is an interestingly serious, even studious, atmosphere to the rooms, one that is as sombrely respectful as it is excited. Capturing more than 500 of Cartier-Bresson’s “decisive moments”, the exhibition is almost overwhelmingly substantial and worthwhile. After only one room, I am certain I will revisit many times over the next few months of the exhibition.

A sense of nostalgia exists not only in relation to the images of times now past, but also in connection to the ideals with which photography, and especially photojournalism, were tied up. Each phase of Cartier-Bresson’s life and career (which forms the structure of the exhibition) notes a significant part of his vision. The first phase (1926-35) is concerned with Surrealism, and is presumably as good a place as any to start a photographic voyage. As Susan Sontag wrote in On Photography: “Surrealism lies at the heart of the photographic enterprise: in the very creation of a duplicate world, of a reality in the second degree, narrower but more dramatic than the one perceived by natural vision.”1

By starting with Surrealism, however, Cartier-Bresson provided a foundation of ideas and images that make his later photography seem somehow more “real” for being implicitly compared with these early photographs of entangled bodies and limbs, grotesque forms and confusing effects. Although there are some interesting consistencies, and some later images retain the complex patterns and ideas of the earlier, there is nevertheless a clear shift between what looks like a dream, and what looks like “reality” (a clever trick of presentation, at the very least). This was in line with the fate of Surrealism itself, which hardly survived the war.

The second phase, 1936-46, was the beginning of Cartier-Bresson’s political era, when he worked for the Communist press and travelled widely. From 1947-70, he created the cooperative Magnum Photos. From this brief history, but more importantly from the exhibition, and the many rooms of very different styles and phases, it is clear that, as the exhibition notes state: “There was not just one, but several Cartier-Bressons.” What emerges most dramatically, however, is the sense of history recorded (perhaps because the exhibition is, after all, a retrospective and the photographs are presented chronologically). Not one history, but several.

The clearest, perhaps, is the history of France (and its relation to other countries): a careful, studied, and seemingly impassioned one. It is, of course subjective – a history of what Cartier-Bresson saw, as much as what happened, but that is important in itself. As WJT Mitchell explains: “Every history is really two histories, the story of what happened and the story of the perception of what happened, its representation in verbal and visual narratives, punctuated by iconic moments.”2

Cartier-Bresson’s history is interesting also because it is a dominant narrative, or perception, of French history and people, partly because of a political and public will for that to be so. “A photograph … cannot make a dent in public opinion unless there is an appropriate context of feeling and attitude,” said Susan Sontag.3 Photographs of Vietnam had an effect in America, but only because there was already an antiwar sentiment. Journalists felt supported in their efforts. But there was little similar feeling around the Korean war, so there weren’t the same kinds of photos published.

To study the Cartier-Bresson legacy, and the enthusiasm of the people seeing the exhibition, is to pick up on that public mood, and the revived identification with the images and history that he depicted many decades ago. At the exhibition, there are crowds around Libération de Paris, France (1944), for example, which shows a chaos of flags, barricades being taken down, and shaky, out-of-focus snapshots of Paris, damaged and still littered with rubble and confused soldiers.

There is laughter around the photos of the Coronation of King George VI in London (1937), showing ordinary Londoners in curious states of both interest and alienation: a child screaming on his father’s shoulders; a man, drunk or asleep, passed out on a bed of newspapers, below scaffolding on which rows of people look out for the king. The camera, at all times, is pointed towards the people rather than the new king. (Perhaps this is a very French or socialist perspective of England – which, according to the laughter, is no past sentiment.)

There are startling shots of wartime France, including Nazi rallies. Then there are the wartime films, with their bizarrely forced cheerfulness and a full audience: they are strangely moving and sad, especially with titles such as The Amazing New Film from Spain: Return to Life – with a note explaining that the film is an “aid to Spanish democracy”. The political context seems oddly familiar.

In the photographs taken during a year in Africa (shortly after his military service ended), Cartier-Bresson shows children playing in the street, fishermen, rowers, and everyday life along the Ivory Coast – with the contradiction of “everyday” and “sublime” that characterises the best of his shots.

These “decisive moments” affect a real intensity in the exhibition – hundreds of brilliant, piercing shots, fascinating in so many ways. The experimental, Surrealist forms, the exploratory series of Africa, the tragic-comic scenes of British society … Time slips away with each new photo. All that has gone – ideals, people, politics, and even a mood of innovation and revolution that existed when the photos were taken. Now, many decades later, they seem like sudden flashbacks to another time – strangely familiar (partly because some of the images are familiar, and others refer to familiar events) as well as strange.

“All photographs are memento mori. To take a photograph is to participate in another person’s (or thing’s) mortality, vulnerability, mutability. Precisely by slicing out this moment and freezing it, all photographs testify to time’s relentless melt.”4

Perhaps this is the gentler side of voyeurism. To walk through hundreds of photographs by Cartier-Bresson is to walk through his life, and that of France. As a visitor, somewhere between tourist, student and immigrant, it is to stumble into a world that is within view, but will always be someone else’s, which is perhaps the essence of all photography. It feels particularly so with these photographs. There is such a sense of life and grounding in them, of discovery and enlightenment that it is difficult not to think, at times, that you have lived in these moments too. And that is what makes Cartier-Bresson such a brilliant and accomplished photographer: he has opened up a world of people, ideas and life that are so clear and direct that empathy with them is tangible and unforgettable.

Sometimes, people still consider photography as a secondary art. Even Cartier-Bresson said that the camera, rather than him, did everything. Perhaps he was exposing the art of photography by saying something so absurd, since his vision and attention to other people is present and discernable, even to the most cynical critic. It would be difficult to see this exhibition, and retain that cynicism, however, when witnessing so many frames of evidence of that spark that drives people to announce “this is art!” – that magic, or empathy, or brilliance in a “decisive moment” to use the photographer’s language. To see so many people intently admiring and engaging with rooms and rooms of black-and-white photography is outstanding in itself. Though there is a nostalgia that comes from seeing old ideals and times now gone, the exhibition is fresh evidence, nevertheless, that the effects and power of Cartier-Bresson’s vision is alive and well. 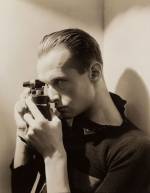 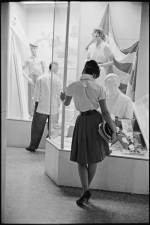 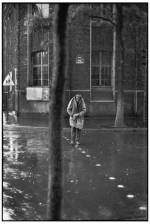 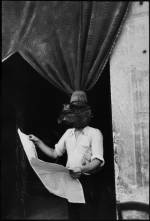 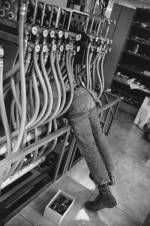 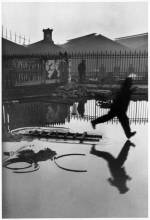 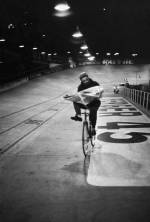