Could one human’s lifetime of artistic knowledge be encoded? That is what Cohen set out to discover when he began work on what would become the AARON computer program

The current petite but perfectly formed exhibition at the Gazelli Art House proves that Harold Cohen (1928-2016) was first and foremost a supreme colourist. Great bursts of bright, clear, life-enhancing colour from two large paintings greet the visitor in the main space of the gallery, although, as Cohen wrote in 2009: “Colour was not itself my primary goal, rather it served as the domain in which my primary goal has been pursued.”1 This is because the works on view here – the primary goal – were made by AARON, an autonomous artmaking programme devised by the artist. In the late 1960s, Cohen took on the problem of building a computer program that was a model of artmaking and, in so doing, became one of the greatest pioneers of the relationship of art to software architecture.

Throughout time, artists have been early adopters of new technologies – adapting and altering them to suit particular creative and aesthetic purposes. Before the onset of user-friendly systems, proprietary software and personal computers, artists learned to write code and, out of necessity, often constructed their own hardware. It was a difficult task to employ scientific programming languages that were not designed with any artistic use in mind. Not surprisingly, this became a rare, specialised branch of art. However, this radical concept raised fundamental questions about the process of art and creative behaviour. Using the computer to develop custom programs through the writing of algorithms (rather than using it just as a tool or elaborate paint palette) allowed Cohen, and the handful of other early pioneers in this field, to change and, indeed, extend the strategy of artmaking. In this conception, the computer becomes a simulator of the creative brain and even allows for the possibility of autonomous art creation. This exhibition then, is really an exploration of the nature of artistic process itself.

After an education at the Slade School of Art, the British-born Cohen experienced early success with his (more conventionally painted) art. In 1965, he had a one-man show at the Whitechapel Art Gallery and, a year later, with his brother, Bernard, Cohen represented Britain at the 1966 Venice Biennale. Of those paintings, Cohen wrote in 2007, they, “were made by spattering paint on to the canvas to create a kind of ‘terrain’, then applying rules that determined how a line would move through that terrain”.2

In 1968, he accepted a visiting professorship at the University of California and, “in the early days of a revolution that would change the shape of society”,3 met his first computer. Would it be possible to find a means to emulate human intellectual processes using computing? Concerned that he wouldn’t be able to go on inventing for ever, the idea that a set of rules could be used to do the inventing appealed to him. He further wondered whether it might be possible to externalise everything he knew about art-making so that a machine could do it – he would formulate algorithms by which paintings could be constructed to virtually “paint themselves”. It is this that Cohen spent the remainder of his career puzzling out and, to a great extent, achieved with his program, AARON (the artist’s name in Hebrew).

I first met Cohen in 2003 in his studio in Southern California and was enthralled by his concept of writing a program to do some of the things humans do when they make representations and thus possibly to learn more about the nature of representation. Could one human’s lifetime of artistic knowledge be encoded? Cohen spent two years at Stanford University’s Artificial Intelligence laboratory, and, following experiments, AARON began in about 1973.

Cohen had a long career as an artist and produced much work so this show is, necessarily given the square-footage confines of a central London gallery, better described as a mini-retrospective. With only one work from the 70s, but several from each subsequent decade, there is still much to admire here.

As Cohen refined AARON over the years, its abilities progressed and there were several stages of development in terms of subject matter – loosely-defined figures, still lives, interiors, plant life and jungle abstracts. However, the abstract works have always been my favourites, and there are several gems to discover here including First Sighting, 2012. The artist sent me a jpeg of this piece shortly after it was painted and it was wonderful to see the real thing finally, beautifully hung here above the stairs. Although abstract, the shapes sometimes suggest biological forms and there is a sense that they grow organically across the canvas. In 2011, Cohen told me he thought of them as “existing in some imagined under-water realm, and that determines how I develop them. I want, above all, to generate a sense of place.”4 Ultimately, however, they remain enigmatic. 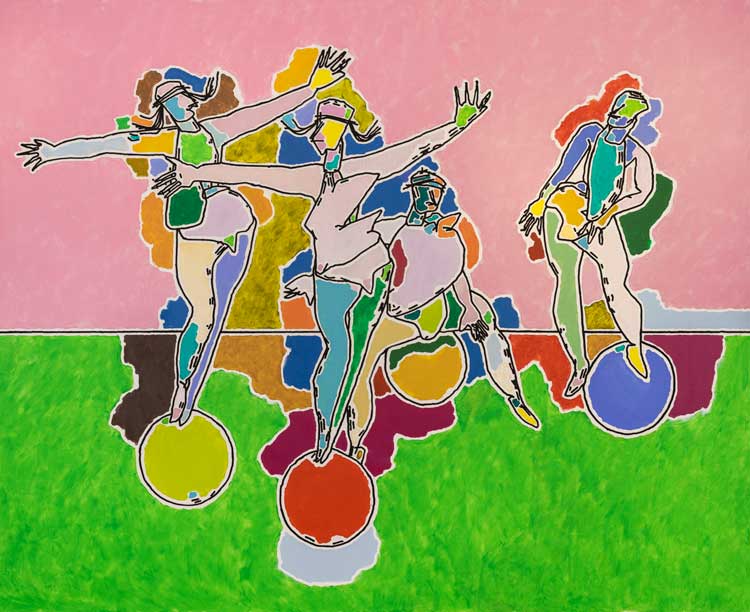 AARON did produce more figurative work, too, and I was pleasantly surprised by several paintings on view here from the Athlete Series of the mid-80s. Untitled, Athlete Series (1986) has a strong sense of movement, combined with a fun cheerfulness and, on the opening evening, many selfies were taken in front of its figures with their outstretched arms as they playfully balance on balls. Everywhere you look, you are surrounded by that glorious colour.

Also on view are examples of the hardware constructed by Cohen to output the work – parts of various drawings machines, including a prototype, Turtle, an arm, and a flat-bed plotter, all dating from 1980. The Turtle, said Cohen, “rolled around on large sheets of paper, leaving a trail of ink behind it”.1 By the time I met him in his studio, the advancing technology had become a large ink-jet printer, specially configured by the artist in conjunction with Epsom. These drawing machines created an underpainting on to which Cohen would very often paint by hand using watercolour, acrylic or oil (as in the works on exhibition here).

The Artificial Intelligence (AI) community embraced him. Around the world, fellow artists working with computation admired him. Sadly, Cohen felt, correctly in some cases, that the traditional artworld had turned its back on him; although he did have several notable successes, for example with his 1983 show at the Tate (four drawings from this, made with a Turtle, are on view here). His work is found in the Victoria & Albert Museum, the Tate, the Stedelijk Museum, Los Angeles County Museum, the National Gallery of Western Australia, and many others, although a good number are from the pre-AARON days (which itself is telling about the artworld’s historic priorities). Now, perhaps thanks to the popular focus on AI, the rise of non-fungible tokens (NFTs), and increasing interest among younger artists in generative art, many are looking at the history of what might be called “art and technology”, and finding, of course, that Cohen is a big part of that history. For too long, in too many quarters of art history, this has been overlooked, and so it is good to see commercial galleries such as Gazelli (which has a 12-year history) continuing to uncover the crucial art and stories from the early days of computer use by artists. As Gazelli now represents the Harold Cohen Estate, we wait eagerly for further explorations of this most fascinating artist.

Also on view at Gazelli, downstairs, when I visited were the five shortlisted artists for the new Lumen Prize NFT Award, sponsored by Right Click Save. The winner, Aaron Penne x Boreta, currently has a solo exhibition in this space. The winning work Rituals – Venice (visuals by Aaron Penne, music created by Justin Boreta) is an infinite audio-visual artwork, continuously generating synthesised music and visuals for up to 9 million years. Coincidentally, Penne (b1988) was a graduate student in electrical engineering at the University of California at San Diego during Cohen’s time as emeritus professor. Penne was inspired by a Cohen exhibition there in 2011, and has himself been making art with code since 2018. He said: “Although generative artwork has been around since the middle of the 20th century, it still feels new … its outputs are potentially limitless. Instead of being a distant object, it can be interactive, projected, immersive, on your phone, on your TV, in your video games … By embracing these sorts of possibilities creativity will flourish in exciting new ways.”

Penne has been described as a pioneer of NFT generative art, therefore this exhibition at Gazelli gives a unique opportunity to see examples of both the beginnings of computer art and its newest developments in one place. Will NFT/crypto really become the “natural positive evolution for the medium”, as Penne believes. Only time will tell. This is certainly no longer a rare branch of art, but if the work on view here is any indication, it seems in safe hands.

• Rituals – Venice, winner of the Lumen Prize: the NFT Award, is on Gazelli’s online platform Gazell.IO, London, until 19 November 2022.