If you can move beyond the small size of the venue and the incongruity of hermetically sealed display vitrines, this show provides a chance to view Perry’s raw, angry and provocative early works

Grayson Perry. Artefact for people who have no identity, 1994. Private collection. © Grayson Perry, courtesy the artist and Victoria Miro.

His pots are not always pretty, nor his plates polite, but what else were you expecting from Britain’s best-loved transvestite potter? Since winning the Turner Prize in 2003, Grayson Perry – and his alter-ego, Claire – have enjoyed a prominent place in the public consciousness. His ceramics are well known for combining cutting social commentary with effusive decoration in a style he has described as a “car crash of influences”. His earliest works, however, have remained largely unknown. These raw, angry and often shocking pieces are integral to the evolution of his practice. It is therefore remarkable that this exhibition at Bath’s Holburne Museum is the first to survey Perry’s initial forays into the art world, focusing on the stirring and provocative work he produced between 1982 and 1994. 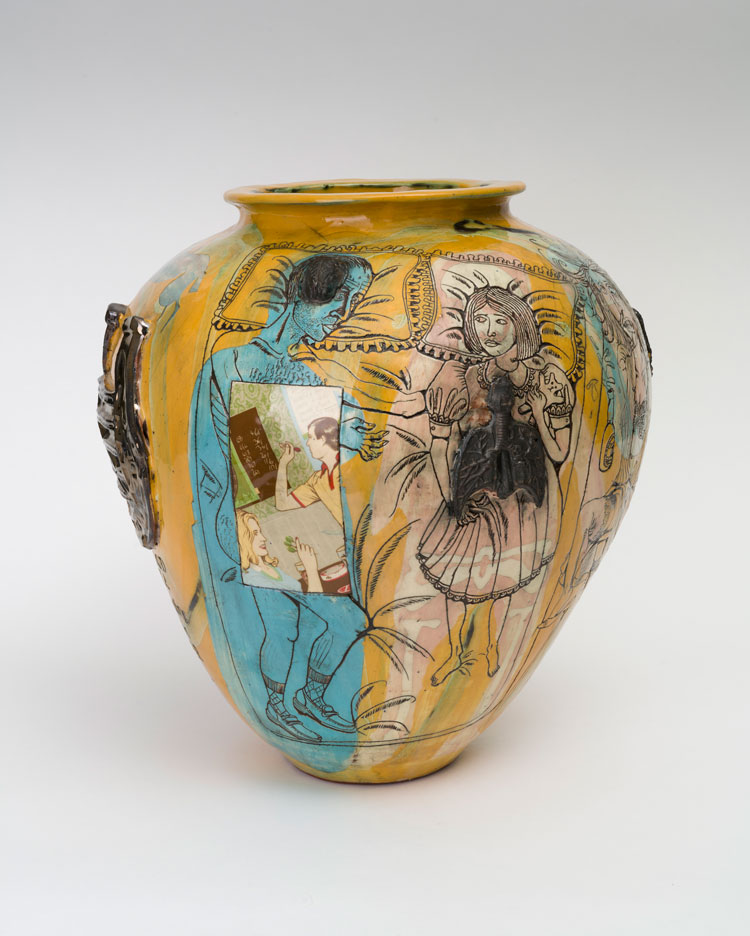 It didn’t help, of course, that the whereabouts of many of these works was, until recently, unknown; the 70 objects on display in Bath were crowdsourced from across the UK following a successful national appeal. Many date from the days when Perry was a struggling unknown, others were produced as he reached the cusp of acceptance by an art world that largely dismissed ceramics as lowly craft objects. Importantly, all of them were made before Perry embarked on a course of psychotherapy that would change his life and art for ever. This was a fractious and priapic period in which he used ceramics to explore the darker recesses of his personality and sexuality. As one inscription reads: “I am angry, like the wind, at everything and nothing.” 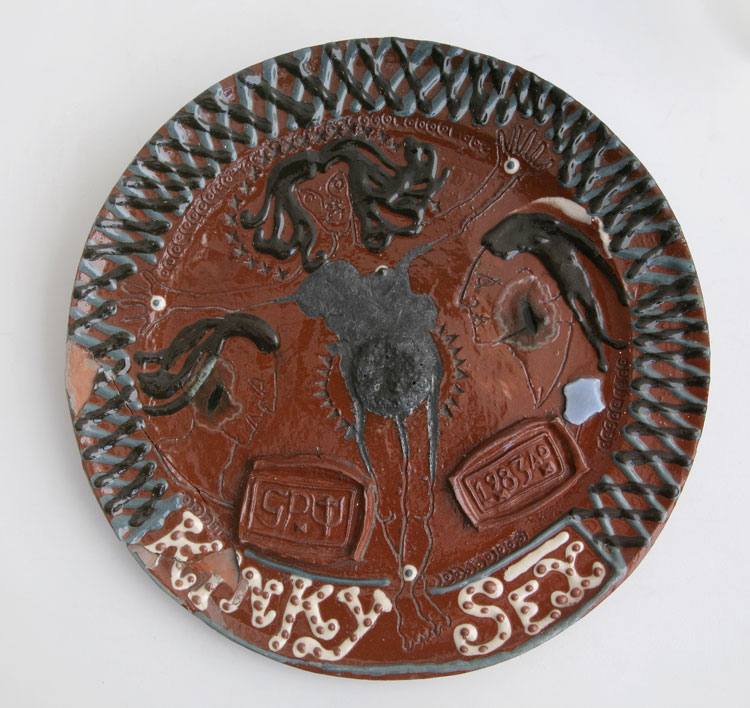 The earliest works in the show were made soon after Perry completed his fine art degree at Portsmouth Polytechnic. It was while squatting in Camden, north London, that he began attending pottery evening classes and where he produced his first plate, Kinky Sex (1983). Its form and style reference the slipware portrait dishes of Thomas Toft, though the sadomasochistic subtext of its ritualised imagery – which features a crucified figure wounded by a melted coin – would probably have the 17th-century potter turning in his grave. Other plates from this period feature Nazi swastikas and references to sexual practices, elements deliberately designed to shock and offend. As Perry notes: “I made crude vessels covered in crude drawings of crude acts. Sadomasochism, bondage, ritual humiliation, cross-dressing and infantilism formed my core subject matter.” But the real shocker here is the absurdly small, dimly lit side room in which these inflammatory works are displayed. 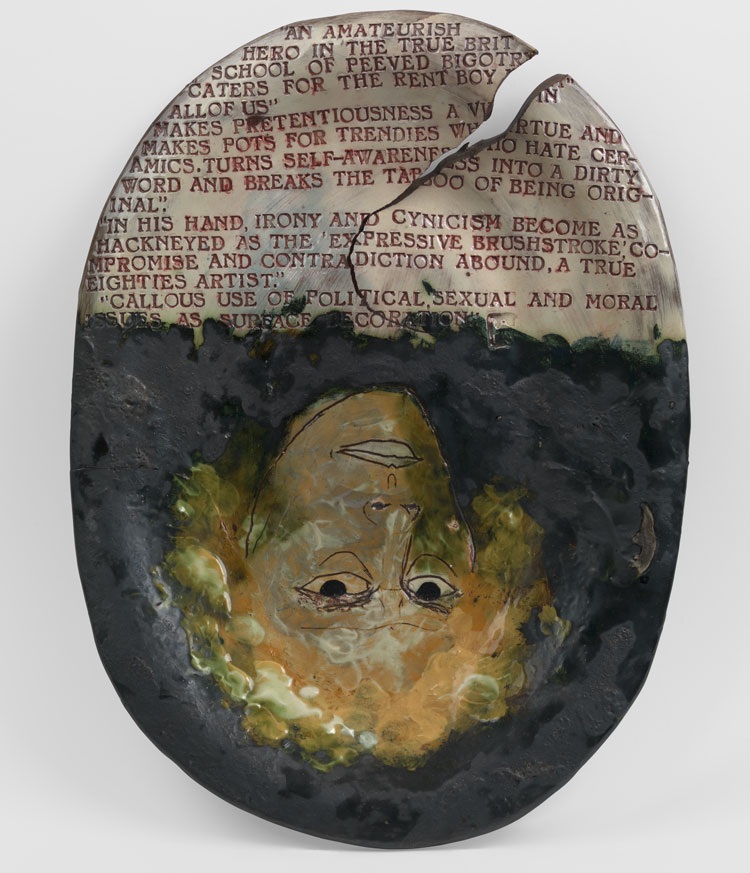 If the first room has you jostling with other visitors and straining to catch a glimpse of Perry’s films and sketchbooks, then a little more breathing space is afforded in the second. Included here is Self Portrait Cracked and Warped (1985), a less-offensive ceramic plate decorated with a Georg Baselitz-inspired portrait and a self-deprecating text. A huge crack running from the outer edge to its centre appears contrived, but is, in fact, the result of poor handling and technical ineptitude. Though the fault makes this piece, it highlights Perry’s irreverent approach to ceramic processes and his rejection of traditional studio pottery techniques of the kind exemplified by Bernard Leach.

Another notable plate is Map of Essex (1990), one of his first map pieces. The drawings covering its green glazed surface refer to significant locations from his youth, such as a bikers’ tea hut in Epping Forest, an Esso filling station, the Bicknacre home where he grew up and St Peter-on-the-Wall, in Bradwell-on-Sea, one of Britain’s oldest churches and an inspiration for A House For Essex (2015), the eccentric green-and-white tile-clad guesthouse that he designed with the architect Charles Holland. As an early piece of Perry myth-making, the plate highlights the significant impact that the English county had on the formation of his identity. 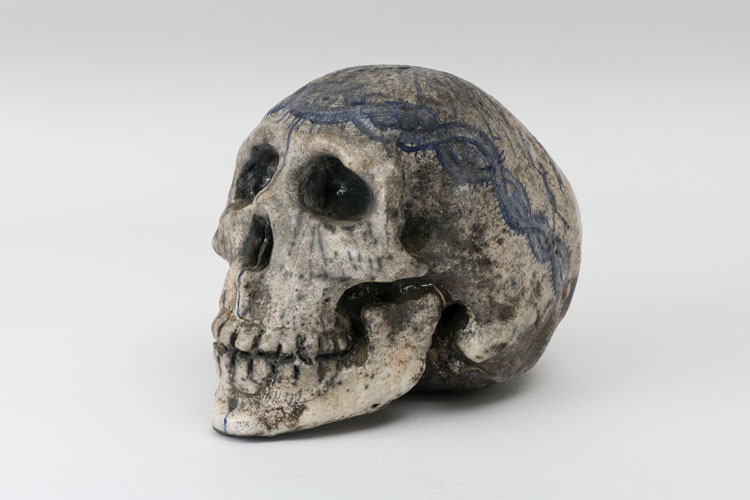 While Essex plays a large role in these early works, so, too, does fantasy, sexual perversion, motorcycling, money and death. The latter is addressed in curious little pieces such as Skull (1989) and Grotesque Devil Head (1988), but most notably in a striking series of blue funerary urns created with the matt jasperware that Josiah Wedgwood made famous in the 1770s. Among these unglazed urns is Paul Conran – Art Lover (1985), which is covered with reminders of death – a skeleton, an hourglass, a coffin. Another is I Am the Myth Maker (1989), whose exhortation to “pay the myth maker” speaks to Perry’s obsession with earning money. Yet, as the artist notes, he ironically stopped producing these money-spinners because of boredom and the desire for something new. 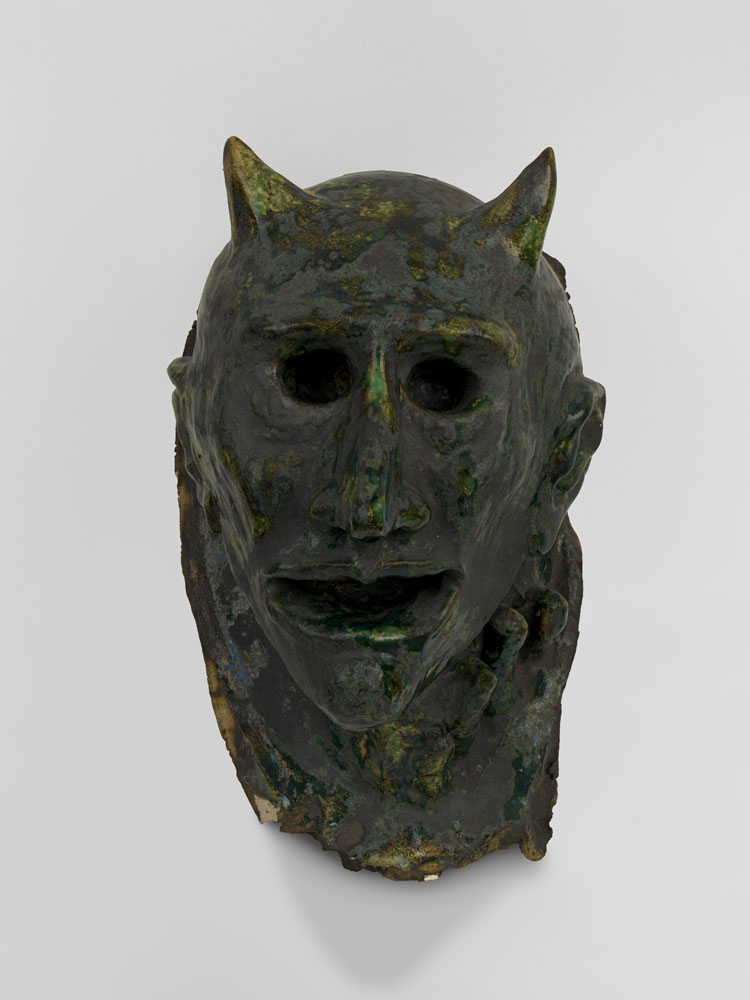 The vessels for which Perry is best known are created not by throwing clay on a wheel, but by a process known as coiling, whereby the pot’s form develops slowly using rolls of clay. His earliest pots, such as Patterns of Violent Behaviour (1985), display fairly crude, simple forms and are decorated with a deliberately naive drawing style. This example features various acts of violence across history: Charles I is shown slaughtering a deer, a terrorist murders a woman, and a bespectacled figure holding a meat cleaver appears to have castrated himself. The decorative vocabulary of this and other works borrow heavily from English country potteries: images are scratched into the pot’s surface, along with stamped inscriptions and slip trailing (where pottery is coated with a semi-liquid clay to form a raised surface).

By the late 80s, Perry’s pots were becoming slicker and more refined. The introduction of transfers and cut-out images combined with hand-drawn decoration and incised marks represented a significant development, exemplified by works such as Cocktail Party (1989). Its string of haggard women drinking, smoking and exchanging pleasantries mocks the art-world parties to which Perry was being increasingly invited. The figures’ clothing, featuring transfers of schlocky fabric designs, includes a 70s-style paisley pattern that is repeated on Meaningless Symbols (1993), alongside images of Princess Diana and other vintage illustrations. 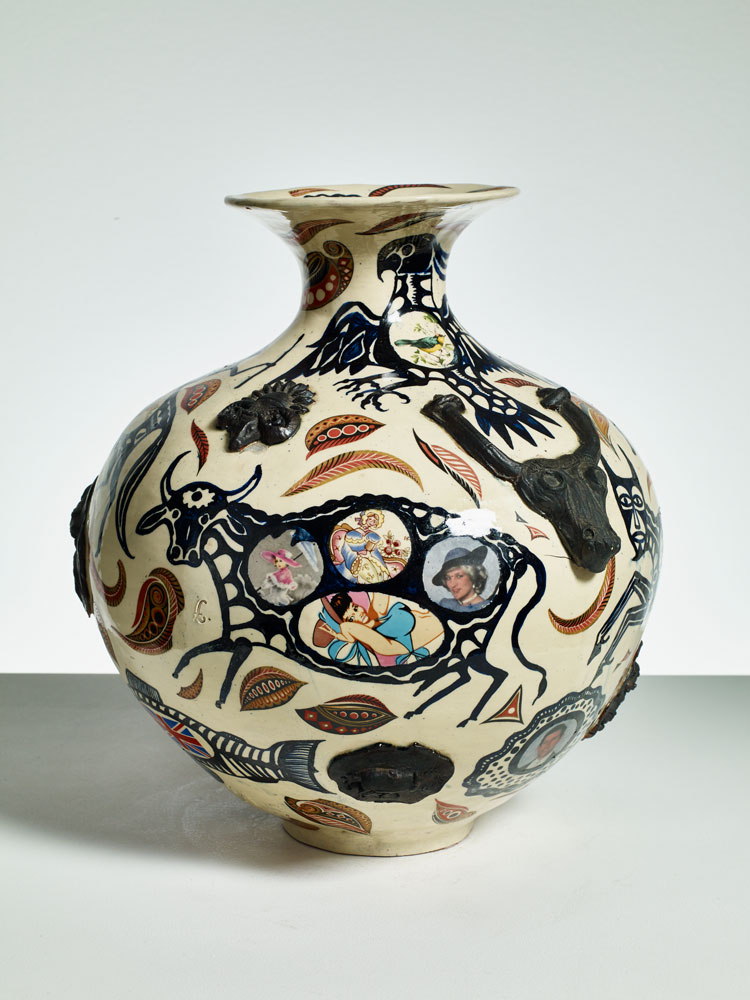 After Perry joined the prestigious Anthony d’Offay Gallery in 1994, the addition of gold lustre glazes introduced a certain glamour to his pots, giving them a sophisticated appearance quite unlike the cruder experiments seen earlier on. Yet, despite their technical advances, these later examples lack the edginess and, indeed, the character of Perry’s earliest experiments. A photograph in the first room shows Perry’s first plates sitting on the mantlepiece of his Camden squat, where they appear right at home. In Bath, they are hermetically sealed in vitrines and display cases, separating them from the domestic context for which they were designed and, to an extent, weakening their subversive strength. Regardless of its shortcomings, this exhibition provides an important, and at times unsettling, insight into Perry’s artistic development, and the seamy milieu in which it flourished. 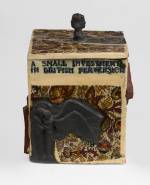 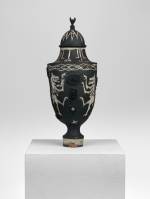 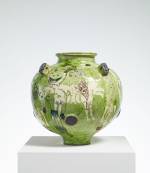