From the luxurious carpet depicting a homeless man to the Osprey handbag bearing the words ‘private school for my kids’, Perry is not afraid to lampoon the very people who buy his work 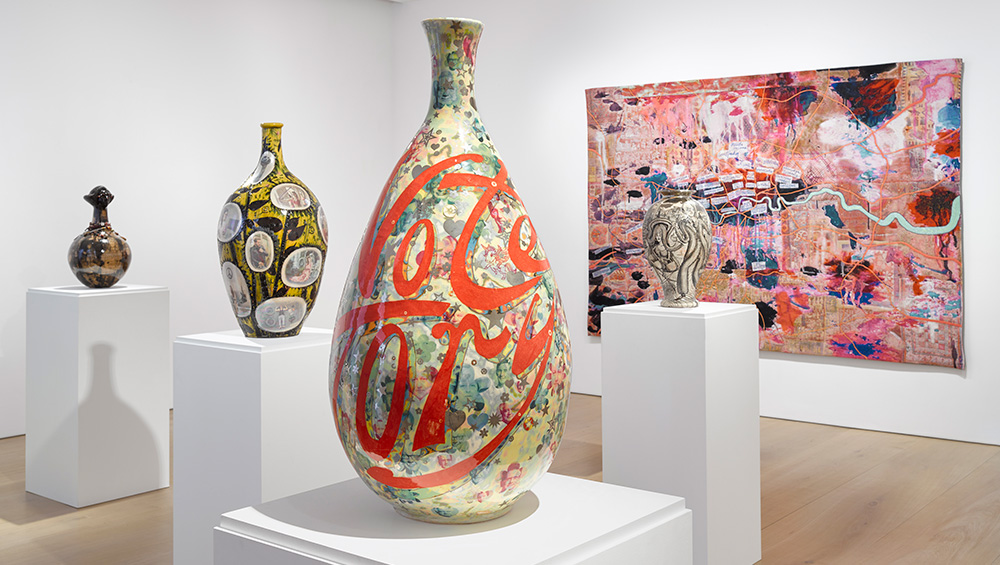 Grayson Perry has dressed down for the opening of his first commercial show in seven years: on this particularly wet, autumnal day, he is wearing rain-dipped blue chinos and a T-shirt. This is a complete contrast to the spectacular frocks, fuchsia or lemon-yellow wigs and carnival makeup he favours when appearing as his alter-ego Claire, in whose guise he accepted the Turner Prize in 2003 – the first self-proclaimed “potter” to do so. In the intervening years, Perry has become an unlikely, pot-throwing, cross-dressing national treasure. He has given the BBC Reith lectures, fronted TV documentaries about taste – investigating, with irreverence and glee, every aspect of how class-conscious Brits declare their aspirations to belong to a specific tribe by how they dress, live and shop – as well as more poignant reflections on masculinity. He has staged major exhibitions at pretty much all the UK’s leading institutions, including the British Museum, the National Portrait Gallery and the Serpentine, and had blockbuster shows internationally. He even curated last year’s Royal Academy summer show.

Now either Perry or his gallery - or both - feel it's time to re-engage with his wealthy collector base. And does he pussyfoot around his usual topics (the UK’s ever-widening social and economic divide, or our quest for meaning and identity) or targets (the rich, the privileged and the narcissistic)? Not a bit of it. 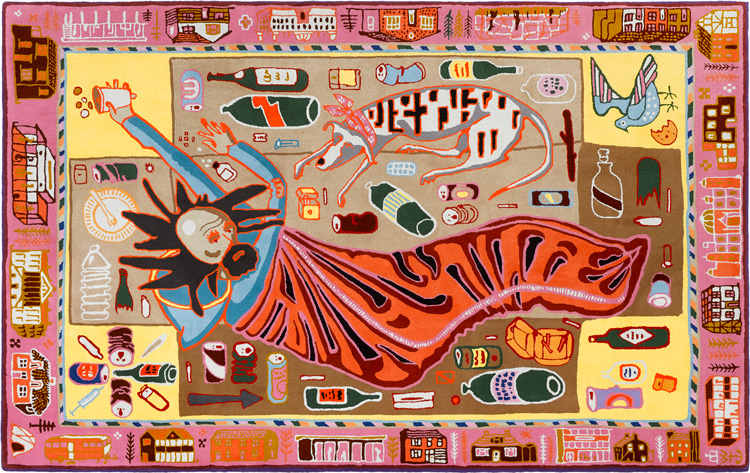 His favourite work in Grayson Perry: Super Rich Interior Decoration is a sumptuously coloured carpet that occupies the floor of the smallest gallery. It depicts a homeless man, sprawled halfway out of his sleeping bag, his cup of coins spilling on to the pavement, while the detritus of his life is spread out around him: a skeletally thin dog, used bottles and cans and fast-food containers and wrappers. In the manner of the classic Afghan rug on which it was apparently based, this scene is bordered by a variety of homes, from opulent villas to cosy cottages; all the better to emphasise the homeless man’s depleted state. It is called Don’t Look Down (2019). Only Perry could get away with something as close to the bone as this: creating a luxurious, bespoke, arty carpet for the super rich that flaunts the plight of those at the opposite end of the social spectrum. “I’m fascinated by who would put this in their house,” he says. “It’s kind of a dare.”

The title of the show came from a throwaway comment made by a supercilious architect about his curation of the RA show last year, in which Perry picked out specific colours as a way to group works. “When he saw my lemon-yellow room, he said: ‘Ooh, yeah, I see what you’ve done: interior decoration.” I’ll always roll with the punches when it comes to snarky people. So I said: ‘Yeah, that’s what we all do us artists: super-rich interior decoration.” Which immediately struck him as “good inspiration for a commercial show”.

Having decided to squarely and satirically target the rich, Perry “spent a morning going through Google looking at lots of rich people’s houses, what they looked like, and I noticed that quite often in the main room they always had a big abstract painting, like a statement thing”. This resulted in a large wall tapestry in the main gallery, titled – unsurprisingly - Large Expensive Abstract Painting (2019). But it isn’t abstract at all: it’s a liverish, lively, anthropological tribute to London – “the spiritual home of the super rich”, Perry quips - shot through with the silvery blue, snaking contours of the Thames. As you would expect, with Perry, there are multiple layers of witty and perceptive associations, visual and verbal. The background is a collaged pattern of different types of carpets – of the kind you would expect to find in the relevant neighbourhoods according to their aspirations or tastes. Bubble captions erupt across this ethnographic map, each articulating pithy London-ish tropes that chime with the postcode, such as “gig economy”, “interns”, “ethically sourced”, or “high net worth individuals”.

Here the target isn’t just the super rich. From hipster co-working techies in Shoreditch to do-gooding vegans in Deptford, no one gets off scot-free. He tells the assembled journalists: “Us liberal elite like to point and say: ‘Look at those super-rich people.’ There’s a much more powerful dynamic going on in society: the top 20% of well-educated, metropolitan, media-savvy, stylish people (in which group he assures us we are included) … have got the best of the country. We like to point and sneer, but,” he says, his voice dropping to a whisper: “We’re part of the problem.”

So this show is about money and power, but also desire, a theme explored, with varying degrees of rancour, on several large new pots. Pots are his bestselling items, he reveals to us later. “That’s what I’m best known for. Pots sell really well. Art collectors want a typical piece. If I made endless shows of typical pieces, they’d sell out really easily.” Obligingly, he has created at least a dozen pots, grouped in the main gallery, which anatomise desire, from social media tropes to the futility of shopping for happiness. The former is exemplified by My Perfect Life (2019), plastered, scrapbook style, with images from Instagram: “All these people want to express their individuality, but they all end up looking the same,” says Perry. The theme of desire gets several airings, including Shopping for Meaning (2019), a vase depicting Perry in wig, headscarf and an assortment of outfits posing for photographs outside London’s most expensive designer stores; he looks pretty thrilled with his lot in all of them. Another, Searching for Authenticity (2019), is emblazoned with the items of clothing that once symbolised a rejection of the status quo (leather jackets, beards, CND banners) but that are now worn to signal aspirational lifestyle choices, however transitory; rebel for a day. 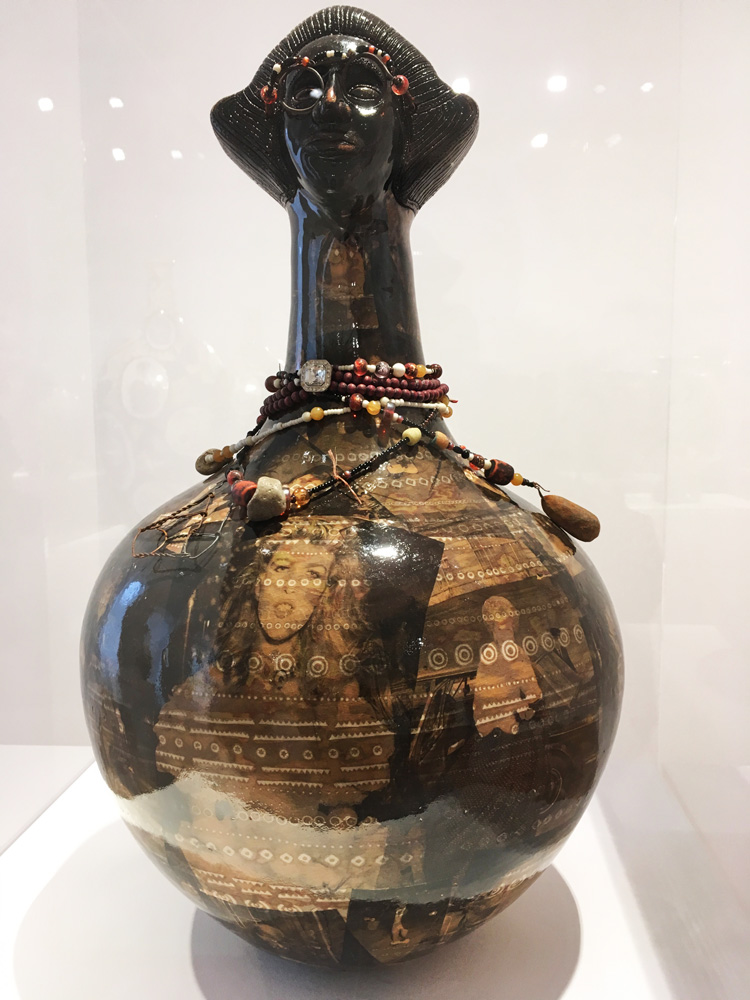 Are these images or topics given extra weight by being slapped on an expensive, arty pot? Not really. The form and material are fairly irrelevant. But there is one piece, Traditional Society (2019) that has a little extra oomph: inspired, he says, by “one of those old, aristocratic, social-society-in-London people; posh people from the olden days who often had colonial roots”. Hence the overtly, voluptuously African form, wide of girth and skinny of neck, managing to convey a rich mixture of authentic tribal sculpture and buxom, self-important matron, her wing-tipped spectacles perched on her nose, bohemian beads wrapped around her neck. It is plastered with old press photos of “society ladies” from the 1970s and 80s, taken by society snapper Richard Young.

A more contemporary snapper – of society in all its richness and diversity – is also included in the show: Martin Parr, a friend of Perry’s. “He’s always said you can use my photographs in your work if you like. And I’ve been waiting for the right opportunity to come along.” The ones he has chosen here show rich people at play, which he has plastered over a classic ceramic vase turned into a lamp. (It is something he had previously avoided making, he says, because: “It’s one of the sacrileges of the ceramics world: interior decorators making pots into lamps.”) He has called it Money on Holiday (2019). 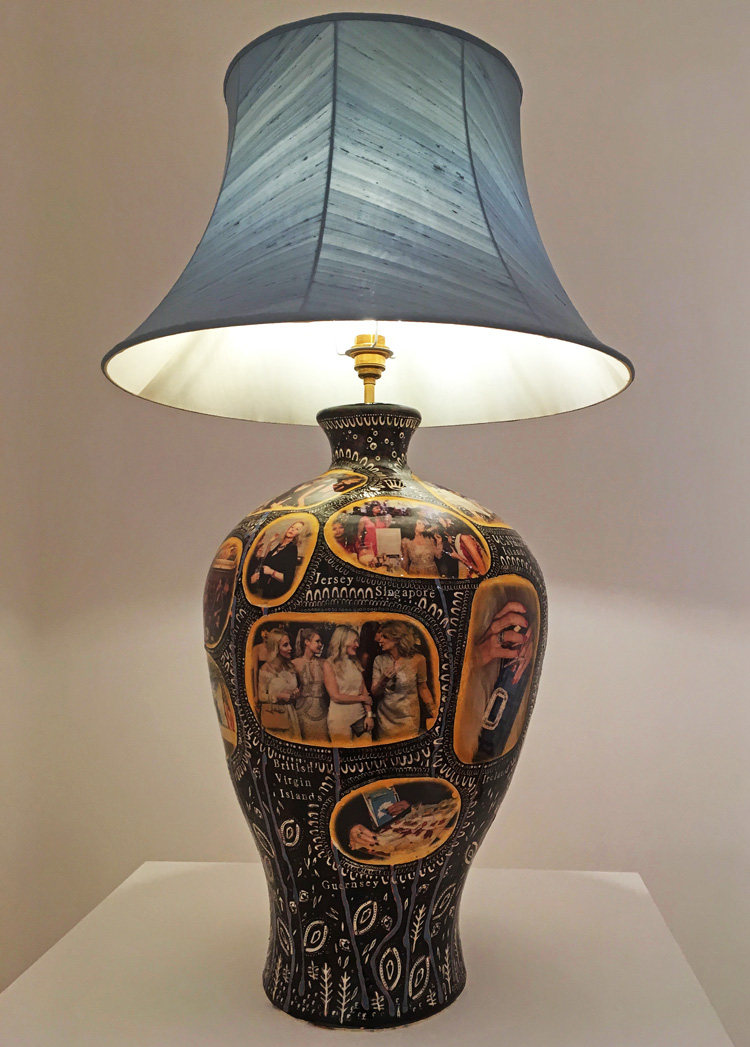 Social sacrilege is meat and drink to Perry. He has even gone against the stereotype of the lefty activist artist to create a Vote Tory vase, emblazoned with the gurning faces of assorted current Conservative party members, peppered with pretty flowers and great, Ralph Steadman-ish sprawling red letters, which drip – presumably - with the blood of the crushed underclasses. 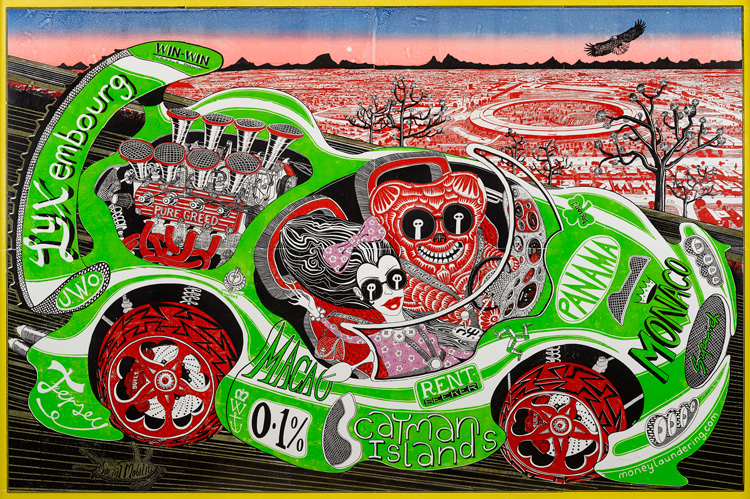 Perry admits: “There is a kind of tension in this show, in that I’m taking the piss out of the people who buy my art, but also benefiting greatly from their largesse.” He draws our attention to one of the most vicious works, a piece called Sponsored by You (2019), saying: “Here’s Alan Measles (Perry’s childhood teddy bear) and Claire (his alter ego) driving through Silicon Valley.” Fuelled by “pure greed” (the words written across the engine), the bodywork of this sporty little, acid-green number is emblazoned with global tax havens, displayed as sponsors (Macau, Jersey, Luxembourg, Panama). You can just make out a drab little puddle of “social mobility” being dispersed under its fat back wheel. In the red and blasted wasteland they are driving through, one significant piece of architecture is discernible – Norman Foster’s circular Apple HQ, which Perry dubs: “the world’s biggest tax avoider”.

At his best, Perry is a pot-throwing, rug-weaving Hogarth, spearing our delusions and vanities with a uniquely powerful mix of bile and humour. The humour is vital, he says. “There is this idea that profound things are always depressing. Profound things can be hilarious.” He muses over the fact that “people are scared of humour. One of the main currencies in the art world is seriousness. Which is why you end up with the ridiculous language they use in magazines; it’s like an arms race of seriousness. If I can make my statement more obscure and impenetrable than the last person, I’m more serious than the next person. It’s bollocks. Just be clear.” 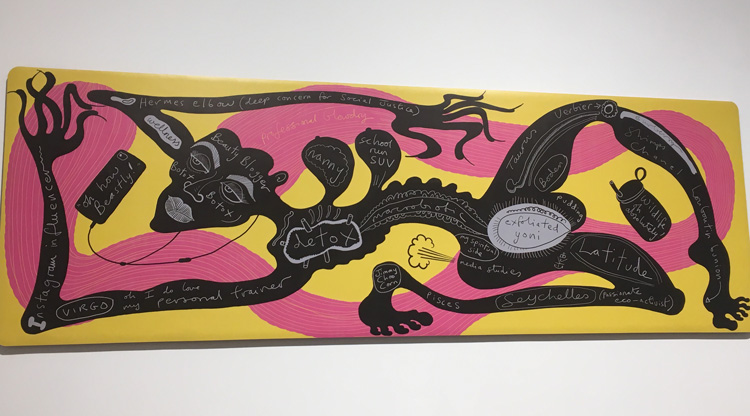 It would be hard to get any clearer than the yoga mat that adorns the back wall of the gallery. Here sprawls a “beauty blogger” (her job title tattooed on her forehead), with impeccably groomed eyebrows and cheeks plumped with Botox. Her lithe body writhes across the pink and yellow mat, its “wellness” credentials picked out in Perry’s signature scrawl, right down to the “exfoliated yoni”. Perry is poking fun at the “virtue signalling” of the affluent elite. “It’s hilarious … we’re now in a post-materialist, consumerist world, where what we buy now is status around our virtues. I’ve been at a couple of events recently where people get their reusable water bottle out and bang it on the table and they’ve got their tote bag with their yoga mat sticking out of it … It’s that Gwyneth Paltrow world.” 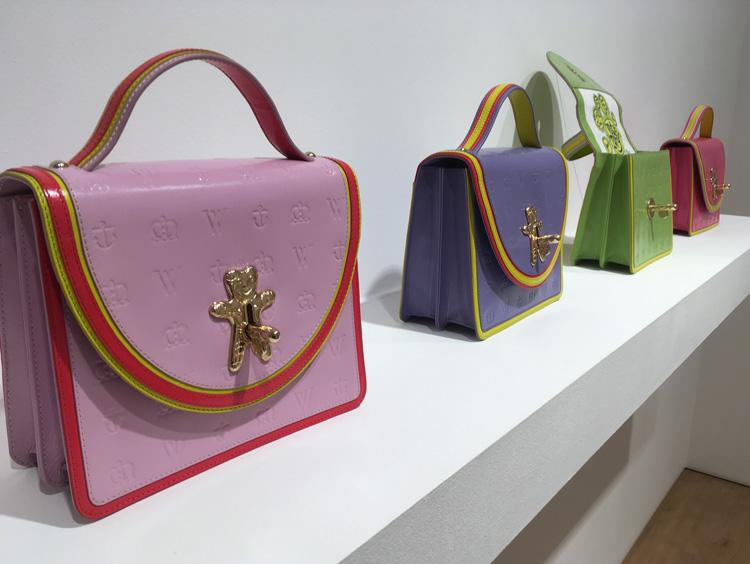 The real joke is that this is a real, limited-edition yoga mat, which can be purchased from the gallery (for £95) just as the limited-edition Osprey handbags can be. Here we see four of the 10 colourways that Perry has conjured with this elite British brand (only £1,800 a pop). “I just wanted to make something that was jolly and fun,” he says. There are multiple layers of mischief with these bags, of course: inside the flap, Perry has scrawled the cliched aspirations of affluence, “things such as ‘private school for my kids’, and ‘house prices up, hurrah,’ all the kinds of things you might talk about when you’re at one of those restaurants where they give you a stool to put your handbag on. I think they’re really desirable. And they’ve got my logo on,” he says – a W next to an anchor icon (put the two together, and what have you got?). The handbag flap is secured by a gold-plated Alan Measles teddy, clearly in a state of high arousal. “You have to twist his nob to open the bag,” says Perry, then adds at full volume: “There’s a metaphor in there somewhere!!” That’s Perry in a nutshell – trampling with great bravado over our social faultlines, and in so doing, exposing the myriad connections between horror and humour, vulgarity and sophistication. 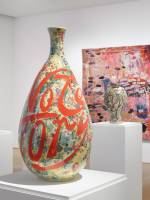 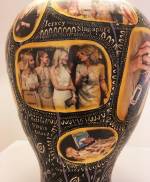 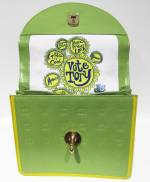 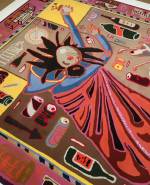