From 1928–1929 Gino Severini painted his epic canvas L’Équilibriste. Beneath a blood-red sky, acrobats and jesters perform their tricks with an eerie sobriety that befits the classical austerity of their surroundings. Poorly proportioned and largely inert, the small crowd of figures mimics the ruined colonnades and the slow desecration of the Roman forum, which provides its backdrop. This is a scene of loss and of longing: for a time when civilisation’s progress was something to be celebrated rather than feared. Painted between the two world wars, L’Équilibriste’s geographical and historical uncertainty speak of a Europe in limbo – reeling from the effects of one war while anticipating the next.

L’Équilibriste was painted at the culminating point of a change in style and subject matter that many avant-garde artists embraced during the 1920s, a change which has come to be known as the retour à l’ordre (return to order). Regarded as a patriotic response to wartime tragedy, the retour à l’ordre was the calm, sombre counterpart to the futurists’ earlier celebration of mechanical speed and might. Severini, who was a founding member of the Italian futurist movement in the 1910s and was well versed in the language of cubism, had until this point been devoted to pushing the limits of abstraction in art while reflecting the speed of modern life in his canvasses. Yet by the 1920s, with the horrors of war fresh in the mind, his earlier experiments with the dynamic possibilities of shape, line and colour were all but abandoned, and Severini applied himself to a careful consideration of neoclassical order and harmony in composition and tone.

The subtitle to the Musée de l’Orangerie’s current retrospective of Severini’s work, Gino Severini (1883–1966): futuriste et neoclassique highlights the eclectic nature of Severini’s stylistic vocabulary. It simultaneously emphasises the irony that underlies the move from futurism to neoclassicism: that the same mechanical force which once formed a powerful source of creative inspiration for artists became recognised for its true nature – as an instrument of national destruction. Yet while such a subtitle seems to promise a show about visual and historical contrasts, Gino Severini is, like any other retrospective, a story of stylistic progression. The loosely chronological structure of the exhibition allows Severini’s divisionism, his futurism, cubism and neoclassicism, to flow seamlessly on from one another in a way that indicates his centrality to the European avant-garde, meanwhile lamenting the historiographical oversight that has prevented his work being shown in a solo retrospective for over 40 years.1 Among the stylistic twists and turns that the exhibition’s hanging affords, however, there emerges one unifying theme: the sense that Severini approached each of these styles with a meticulous eye and an ordered mind, one which he was certainly aware of when he described his aesthetic as one “of compass and number”.

Such an aesthetic may be attributable to the lasting effects of his formal art training in Rome and an exposure to the divisionist technique at an early age. In 1900 Severini and his contemporary Umberto Boccioni met the painter Giacomo Balla, who taught them the techniques and theories behind divisionism, and it was his admiration for Georges Seurat’s highly refined use of this technique that brought Severini to Paris in 1906. His canvases during this decade thus fuse the harmonious composition of the traditional landscape painting with the dissolving surfaces and complex manipulation of colour that had emerged in art following impressionism. The vibrant colour contrasts that underlie the golden serenity of Severini’s Paysage à Civray (Vienne) (1908), displayed on the wall facing the entrance to the exhibition, engage the viewer immediately in the dialogue between classicism and abstraction that the exhibition seeks to promote.

In Printemps à Montmartre (1908), this duality fades into a preoccupation with surface and colour that foresees Severini’s experiments with futurism and cubism. This experimentation began around 1911 and can be seen in the tumultuous Le Boulevard (1911), in which overlapping visual planes rise to the surface, presenting a scene at once solid and dispersed, defined yet indecipherable. As a founding member of the Italian futurist movement, yet based physically among the Parisian avant-garde at this time, Severini’s abstraction took on a hybrid quality that saw him fusing the cubist deconstruction of form with the futurist propensity for the speed and dynamism of everyday life. Reconciling two such compatible creative approaches was far from difficult, and Severini often took the theme of the dancer as a vehicle for these two styles, as is embodied in this exhibition by Severini’s famous Danseuse bleue (1912). Severini allowed these styles, as well as his divisionism, to emerge, fuse and fade whenever he found them appropriate: as such, the radiant beauty of Expansion de la lumière (centrifuge et centripète) of 1913–14 is closely followed by (and, in this exhibition, visually juxtaposed with) Train blindé en action (1915), with its shifting, angular figures that are barely distinguishable from their blazing guns.

The death of Boccioni in 1916 brought Severini closer to the cubist and purist painters, as well as Henri Matisse and Jean Cocteau. His greater exposure to the bold colour and structured surfaces of synthetic cubism and the purist work of Fernand Léger and Amédée Ozenfant initiated a shift in Severini’s practice away from the expression of movement in favour of an emphasis on plasticity. In Femme lisant (Jeanne lisant dans l’atelier; La Lecture n.1) of 1916, figure, table, book and floor tip precariously towards the picture plane, pattern-like in their overlapping and meticulously constructed assemblage. By the time of Nature morte (1919), the objects are invested with a far less abstract solidity that presages Severini’s return to classicism in the early 1920s.

It may be the case that the relative neglect of Severini’s work in the broader history of modernist painting – as evinced by the length of time between this retrospective and his last – is a result of the domination of this history by French avant-garde painting. Certainly, in the narrative of French modernism that this exhibition so audibly reiterates, it is the French-inspired aspects of Severini’s work that are emphasised, perhaps to the detriment of the unique qualities of his oeuvre. While the exhibition catalogue hastens to define Severini as both an Italian and a French artist,2 a duality with which Severini concurred,3 there is a sense that Severini’s passion for order and solid composition formed a stronger basis for his art than did the relentless pursuit of the desecration of form that shaped the legacy of futurism and cubism. As such, some of Severini’s most intriguing works are marginalised in this show, despite the insights that they might offer into what sets the particular modernism of Severini apart from that of his contemporaries.

Severini’s mosaic-style paintings, which round off this relatively small exhibition, are a case in point. While the return to neoclassicism was a move that many of Severini’s contemporaries had entertained, Severini took this further during the late 1920s and the 1930s. In 1928 he painted the interior of Sir George Sitwell’s castle in Florence, stating that he would endeavour in his art “to paint simply, almost like a fresco painting”. His work began to reflect the influence not only of Italian quattrocento frescos but also Byzantine mosaic: during the 1930s he travelled to Ravenna to study church mosaics, a trip that would have a lasting influence on the remainder of his artistic career.4 In the few mosaic-inspired canvasses of the 1930s, which this exhibition includes, such as Contrastes de matières vivantes (1931), Severini returns to the divisionist technique, using dabs of colour in much the same way that mosaicists apply their tiles. The result is a sparkling, highly mobile surface with tangible depth; a surface which, while inspired by the divisionist deconstruction of colour and form, nonetheless presents a unified whole.

These paintings are unique in the history of modernist art; indeed, in their inherent kitschness – the flying cupid and glittering lobster of Contrastes, for example – they are vaguely repellent. Yet it is not simply a change in subject matter or technique that lends them this uniqueness and allows them to sit aside from modernism’s progress: it is the sense they give that Severini was devoted to reconstructing the surface of the painting following decades of deconstruction. Having reduced painting to its basics in his earlier work, the classicism of the 1920s, combined with influence of his Italian roots, allowed Severini to come full circle by the 1930s, back to what he had always excelled at: the production of a harmonious, ordered canvas. This love of order, the aspiration towards solution rather than dissolution, permeates all of his work, and as such should be celebrated rather than sidelined.

Though displayed in correct chronological order at the end of the show, Severini’s mosaic pieces are also set aside conceptually from modernism’s clearly-defined development: even from the divisionism that so closely inspired them. It would seem that Severini’s most Italian qualities are also his least modernist: that he is only French when his work adheres to historiographical perceptions of what modernist painting can be. The dual heritage that this exhibition so celebrates – and which makes Severini’s practice much richer than that of many of his contemporaries – is also a convenient means of imposing conflicting histories upon Severini’s body of work.

3. ‘The cities to which I feel most strongly bound are Cortona and Paris: I was born physically in the first, intellectually and spiritually in the second’. Gino Severini, 1946, quoted in Fonta, ‘Géométries’, p13.

4. During the 1940s (the period immediately following that covered by this exhibition), Severini made several mosaics, including commissions for the church of Saint-Pierre in Freiburg, Germany and for the church of St Mark in his native Cortona, Italy. 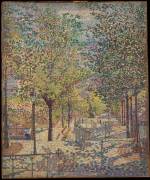 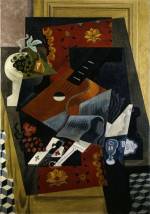