Alberto Giacometti’s scrawny figures pulse with kinetic energy. This new retrospective at Tate Modern shows his versatility, celebrating his passion for materials other than the bronzes for which he is famed, giving a greater breadth and depth to the understanding of his work and inspirations 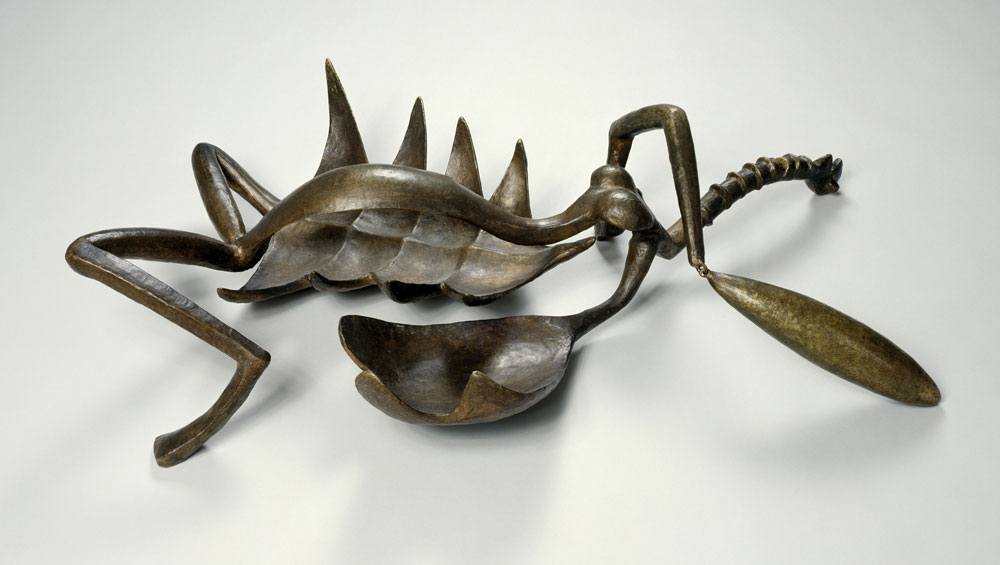 Here is a test: ask anyone you know in their late 30s or older when they first saw a Giacometti. There is an uncanny consistency with almost everyone I have questioned: that moment is recalled with great clarity. I know I was 14, on a family holiday in France. We were visiting the Picasso Museum in Antibes, and one of Giacometti’s bronzes was in the courtyard: a tall, whippet-thin statue of concentrated energy whose visceral impact I recall to this day.

I had never heard of Alberto Giacometti (1901-66) at the time. His figures, though, seemed utterly of a piece with the other artists I was slowly becoming aware of, as I emerged from a pre-pubescent fondness for the immersive sensuality of the impressionists to appreciate art of a more political and provocative nature: the postwar generation whose work was haunted by themes of death and absence, of the inherent chaos in the universe – among them, Yves Klein, Jackson Pollock, and the colourful irreverence of pop art.
Strangely, those born more recently don’t appear to know anything about him. Hopefully, this Tate Modern show will remedy that.

The Tate’s Giacometti retrospective, curated in collaboration with the Fondation Alberto et Annette Giacometti in Paris, and with full access to its extensive archive, wants to show us not just the bronzes for which he became famous, but to celebrate his passion for other materials and textures, including plaster, clay, pen and paint.

Right from the first room, this diversity is beautifully demonstrated with a series of tall white plinths bearing only heads. Presented at the visitor’s eye-level, they range from white through terracotta to black and bronze, from his earliest naturalistic teenage sculptures to works from the 1950s and 60s with their characteristic gristly texture. Often featuring the same people – his favourite models being his brother Diego and his wife Annette – they also include a bust of his friend Simone de Beauvoir. It is a nice, inclusive gesture with which to start the show, rooting Giacometti securely in the explosive creativity, experimentation and traumatic narratives of his time, and in his first and dominant passion for the human form.

The second room jumps straight in at the point where the young Giacometti digresses from a naturalistic style towards the abstract experiments that attracted the attentions (briefly) of André Breton and the surrealists, who soon wanted to include him as one of their number. The Tate’s architectural scenography really excels here, too, with a series of Brâncuși-esque sculptures - again of beautifully variegated tone and material - marching along a wide, low shelf that is painted in the same eau-de-nil colouring as the walls. Set back in this way, the sculptures seem to float in space. To the right, his abstract, movable constructions are arranged behind glass, on widely spaced plinths in such a way as to encourage movement too, choreographing the visitor flows, but giving a sense of space to each exhibit. Although this period was short-lived, his Hour of the Traces (1932), is wonderful: an impossibly precarious arrangement of plaster and wood on a base of rusted steel.

We then encounter his versatility during the 30s, when the lack of funds for his art encouraged him to collaborate with jewellers and interior designers, and the resulting pieces are displayed alongside his notebooks, journals and sketches. Giacometti’s drawings evoke his characteristic spare, yet supremely expressive, lines, and the obvious influences from Egyptian art. At the time when Giacometti made these works, Paris was seething with intellectual and creative enquiry, fuelled by passions for jazz, nightclubs, philosophy, literature and the art of Africa and Egypt in particular, which led to a burgeoning of “Nile style” in textiles, fashion and interiors. But Giacometti’s interest in Egyptian art stems back to his youth, when he accompanied his father – Giovanni Giacometti, a celebrated post-impressionist painter – to his own Venice Biennale event, in 1920, and encountered the Egyptian relics in Florence’s museums.

There is a narrative arc that seems to reveal much about the evolution of his method and inspirations in the ensuing rooms, as the second world war forces Giacometti away from his beloved studio in Paris back to his home country, Switzerland, and far more confined living and working conditions. This seemed to trigger an exploration of how vivid even the smallest sculpture could be, if worked with enough thought and intensity. There are some tiny figures and busts here, no more than a couple of centimetres tall. You get the sense that at this point in his life Giacometti had time but no space. However, after he returned to Paris, his work expanded along with his spatial boundaries, and he brought that tightly knotted intensity into his larger sculptural figures, working towards the style that became his signature.

Which brings us to the stars of the Tate show: Women of Venice, a group of plaster sculptures that have been out of public view since they were last shown at Giacometti’s 1956 Tate Retrospective. This set of six plaster figures was made for that year’s Venice Biennale, when Giacometti represented France, going on to win the Golden Lion for sculpture. Far better than any bronze, these paint-daubed plaster figures show the artist’s hand, working directly with the material, scraping and shaping the figures - their tiny heads, drooping bosoms, curving bellies and outsized feet. This intense and visible engagement of the artist in the figures and the process gives these life-sized effigies of enduring femininity a huge presence; a life-force, almost. Beautifully distended and distorted, slightly fetishistic, anchored to their pedestals, they still appear no less human than the fleshier forms of the live Tate Modern visitors clustering around them.

Above all, the show reveals Giacometti’s restless and constant creative urge. He drew all the time, even while reading; the Fondation has provided the Tate with some of the books he defaced, including erudite tomes on Egyptian art (copies of statues were drawn directly on to adjacent pages).

In a fascinating late interview between the artist and critic David Sylvester, Sylvester tried to pin Giacometti down as to the strange alchemy by which his sculptures seem to take up more space, even when reduced to the scrawniest outline. Sylvester mused that, if a sculpture is narrower, it “is therefore more dense, it has more contained energy; then, if this energy, this contained violence, is increased, one gets the impression that the sculpture dominates more space”. Giacometti’s poetic reply is included on the Tate show’s walls: “In having a quarter of an inch of something, you have a better chance of holding on to a certain feeling of the universe than if you had pretended to be doing the whole sky.”