The exhibition of the Italian artist Fausto Melotti (1901-86) at Waddington Custot Galleries in London is not a full-scale retrospective by any means, but it goes a long way to establishing a representative cross-section of his work.

Ceramic sculptures made at the end of the second world war offer a puppet-like quality, inhabiting a stage made from roughly hewn materials. Done at a time when metals and more conventional materials were unavailable, the works possess the strength of pre-classical civilisations; they possess mystery and a primal power, which, more recently, Melotti’s compatriot, Mimmo Paladino, has found so intriguing and chosen to explore in Italian art history. Also on display are Melotti’s lyrical and intricate brass sculptures, such as Carro delle illusioni (Wagon of illusions) 1984, which are often combined with fragments of fabric, paper and cardboard.

Almost 30 works are presented in the London exhibition, spanning 40 years of artistic production. What is perhaps most striking when viewing the show is the fact that, given the high calibre of Melotti’s work, he is not as well known as, say Alberto Giacometti, who was born in the same year. The historical neglect of his oeuvre is difficult to fathom. Sculpture in the early years of the 20th century underwent colossal change. Before the first world war, Auguste Rodin had dominated and was revered by painters and sculptors alike. In 1904, the Romanian sculptor Constantin Brancusi travelled across Europe – allegedly on foot  – to meet Rodin in Paris. He was so impressed by Rodin that he stayed in his studio for only a few weeks, finding the influence of his mentor overbearing. “No other tree can grow in the shadow of a great oak,” he claimed. Until the early 1910s, Brancusi’s sculpture remained in the same vein as Rodin’s, but realising that he could only develop independently if he abandoned modelling, he turned to the age-old technique of carving stone or wood.

The sculpture of Pablo Picasso is arguably more important than most accounts of the great artist’s work indicate. He made audacious sculptures during the 1920s, such as the maquette Figure 1928, a proposal for a monument to Guillaume Apollinaire, constructed from iron wire and thin metal rods with sheet metal. Figure was one of Picasso’s important vibrant and animated cage-like compositions in which he was able to imply great volume. Much later, in 1962, Figure was enlarged using painted steel, but it is the 1928 version that reveals Picasso’s visionary style, and his ability to break from the powerful tradition of the modelling of solid forms in space. In doing so, he led the way for the next generation, which included Alexander Calder, Giacometti and Melotti.

Giacometti eventually achieved international recognition for his characteristic tall, thin sculptures of the 40s. He had studied at the École des Beaux-Arts in Geneva in 1919-20 and in Italy in 1920-21, and moved to Paris in 1922 during a period of intense restlessness in which he experimented with polychrome sculpture, cages, erotic kinetic objects, near-abstraction and other styles. He participated in the Surrealist movement from 1930 to 1935, but in 1934-35 returned to working from the model (alienating his Surrealist friends and fellow artists), but each sculpture became smaller and smaller, and finally he almost always destroyed them. His recognisable style dates from 1947 when he started to make figures that were thin and elongated. The nature of his work, and his close friendship with the philosopher Jean-Paul Sartre, led Giacometti to become the artist most closely identified with the Existentialist movement. Part of his art-historical importance springs from his choice of figuration at a time when most artists found that, after the horror of war, they could not represent the human form. Abstract art dominated.

Calder was just three years older than Giacometti and Melotti. He had first made sculptures in cut sheet-brass in 1909, while at school. He later developed the use of bent-wire figures to create Cirque Calder (1926-31). A visit to the Paris studio of Piet Mondrian in 1930, however, precipitated Calder’s wire and sheet metal hanging sculptures, which Marcel Duchamp aptly described as “mobiles”.

Evidently the airborne forms of Calder influenced the practice of Melotti, who also absorbed the emotional immediacy of Giacometti’s surrealist sculptures of the 30s made from metal, wood, glass and string. The developmental links between Picasso, Calder and Giacometti establish a significantly requisite context for the work of Melotti. Without the context in place, and viewing his works for the first time, it is clear that Melotti was able to plumb the depths of existential meaning through delicately constructed sculptures of remarkable certainty and understatement. His tableau-like spatial constructions allude to music, from the flight of birds to the experience of melancholy.

In the fine catalogue to accompany the Waddington Custot exhibition, Martin Filler describes Melotti’s work as a “theatre of life”. The work of both Melotti and Giacometti, he asserts: “spanned millennia with enigmatic figural pieces that skipped over the Greco-Roman tradition and tapped into the mysterious energy of pre-Classical Mediterranean prototypes, in which the human form is reduced to its most elemental components in accordance with Modernism’s search for the essential and irreducible”.

Melotti was born in the northern Italian city of Rovereto. At the beginning of the first world war he moved with his family to Florence where he was deeply inspired by the work of the Renaissance masters. He studied electrical engineering in Milan, but in 1922 decided to become a sculptor. In 1930 he met the architect and industrial designer Giò Ponti (1891-1979), who was 10 years his senior. Ponti invited Melotti to work in the porcelain factory Richard-Ginori. Melotti worked there on the figures inspired by Cycladic culture; his figures bearing a striking resemblance to the sculptures of the early bronze age Greek islands in the Aegean sea. Cycladic figures were female nudes, often with their arms folded across their abdomen; they were found in graves, and the originals were painted in bright colours. In formal terms, they appeal to the modernist sensibility in their highly stylised representations of the human form. There is no consensus regarding the precise meaning of Cycladic art, just as with the work of Melotti. While alluding to the archetypal form of human experience, they appear to represent mother nature and ritual worship: they can be seen to function as an accompaniment to death; they are puppet figures or dolls suggestive of an important theatrical role representing at once the nurturer and femme fatale. In the 30s, Melotti gravitated to the artists and intellectuals around Milan’s Il Milione gallery where Wassily Kandinsky, Josef Albers and Lucio Fontana exhibited. In 1935, Melotti had his first solo exhibition there, comprising 18 abstract constructions.

The acute circumstances of the war ended Melotti’s work on large-scale commissions and then caused his “years of silence”, as he described them, culminated in the bombing of his studio along with his works in 1943. There are overtones to be found of the work of American Joseph Cornell’s poetic boxed assemblages, which were created by the juxtaposition of commonplace objects, in the work of Melotti. As mentioned above, the influence of Picasso and Calder is evident; and perceptible, too, is the metaphysical mood expressed in Giorgio de Chirico’s (1888-1978) vaguely menacing Italian piazzas. De Chirico was a painter, sculptor and theatrical designer, the latter being particularly important to any discussion of Melotti’s work. De Chirico established an immediately recognisable dreamlike melancholy and detachment where references to classical mythology enable the viewer to travel in psychological and metaphysical terms. It is, therefore, surprising and also a joy to view the works at Waddington Custot this autumn in London by Melotti, for they can be seen to provide a missing chapter in the modernist narrative. 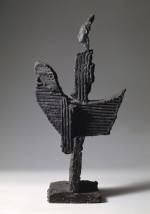 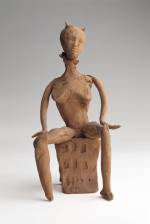 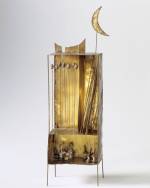 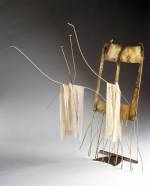 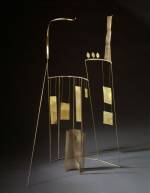 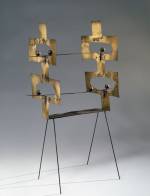 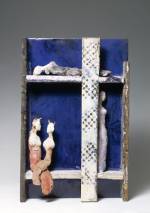