As well as putting artist-made clothing firmly into the category of art, this show also looks at its wider role in gender, protest and cultural differences 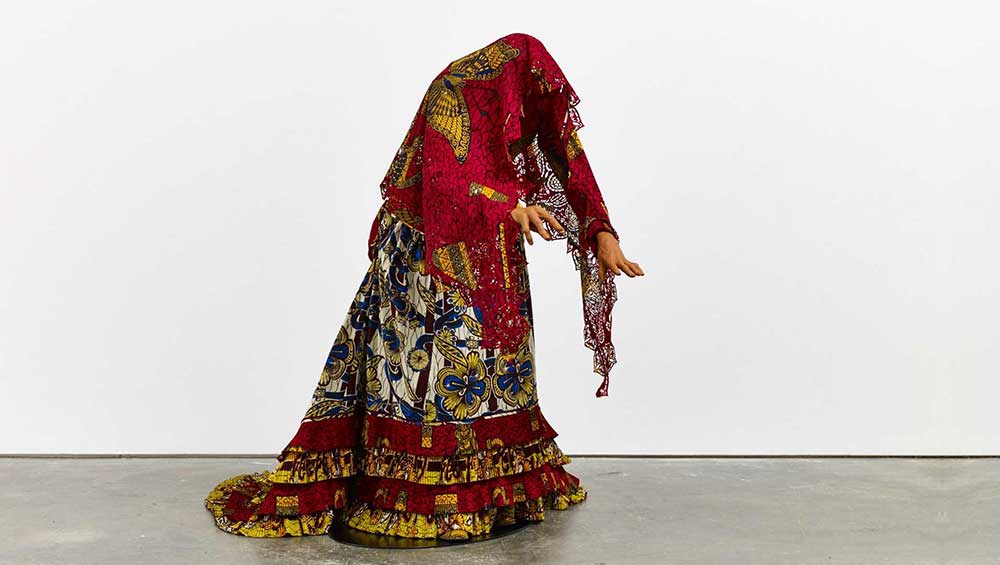 Garmenting: Costume as Contemporary Art at the Museum of Arts and Design in New York makes the case that artist-made clothing is a category of visual art worthy of examination in its own right. It is a bold claim because, as curator Alexandra Schwartz explained in a 2017 Critics Page of the Brooklyn Rail that served as an idea incubator for this show, she discovered that there was little scholarship on the intersection of visual art and fashion. “Few art historians delve into fashion history,” she wrote then, “while most fashion and costume historians do not venture into the realm of visual art; and fashion theory, which comes closest to uniting these disciplines, is still a nascent field.” Fashion historian Valerie Steele maintained in those same pages: “There exists no such critical consensus about whether fashion is art.”

Undergirding Schwartz’s premise in Garmenting is a position within art historical scholarship that has become normalised over past decades: that distinctions between high and low culture, or fine and applied arts, have become less useful and even retrograde. This mirrors recent allergies towards hierarchy and the assignment of value in critical theory and contemporary discourse, especially concerning gender and race. Garmenting’s critical terrain is familiar to Schwartz, who earned her art history PhD with a dissertation and later book on Ed Ruscha – a pop artist who created fine art from the landscape of car culture – and has curated major exhibitions, among others, Modern Women (2011), Helen Frankenthaler (2017), and 52 Artists: A Feminist Milestone (forthcoming 2022). 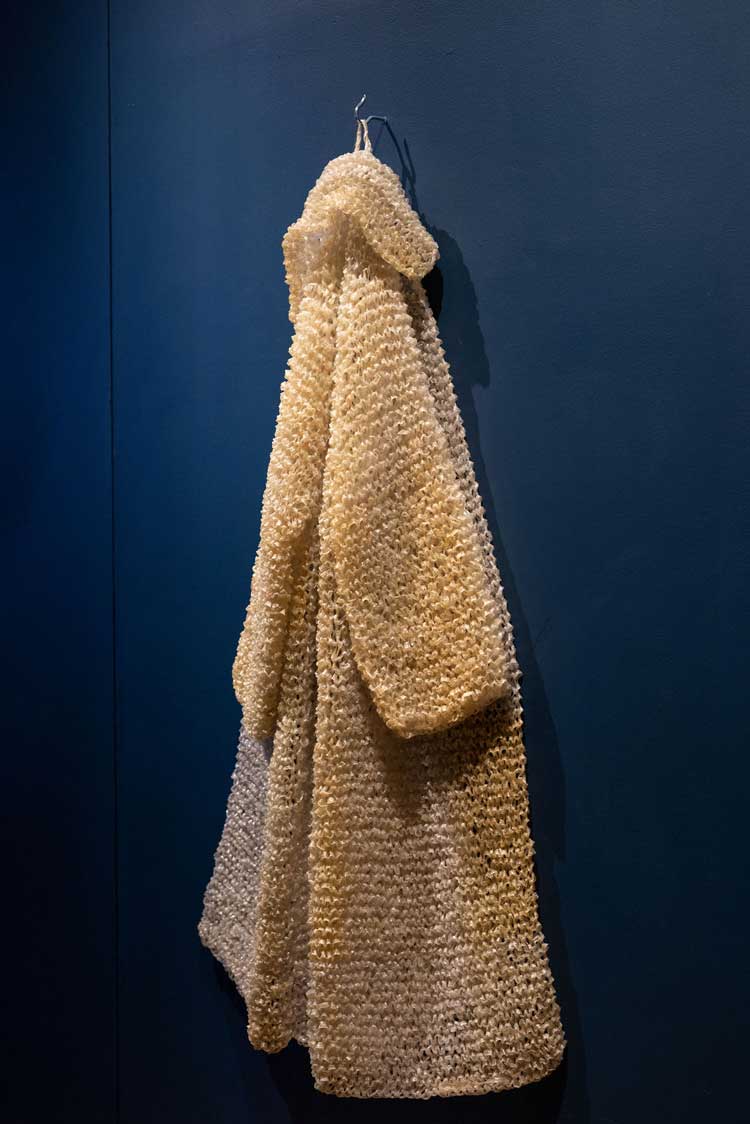 Oliver Herring. Hanging Coat Nr 1 (from the A Flower for Ethyl Eichelberger series), 1993. Photo by Jenna Bascom; courtesy the Museum of Arts and Design.

Garmenting presents the work of 35 artists of a broad geography from Nepal to Switzerland to Brazil. The focus is decidedly the global contemporary artworld; even the show’s most established artists, such as Franz Erhard Walther, Annette Messager and Louise Bourgeois, show works from 1990 or later. Across two floors, the work is distributed among five themes: functionality, gender, activism, cultural difference and performance, with the least space given to the latter due to a programme of live performances on the museum’s fifth floor. Easy permeability of Garmenting’s thematic demarcations highlights that the works on view speak to issues much larger than the hermetic concerns of the fashion or art worlds precisely because clothing signifies to such diverse ends in everyday life: as armour, camouflage, marker of belonging or difference, protest, and so on. Oliver Herring’s powerful Hanging Coat Nr 1 (1993) appears in the activism section, for instance, but could just as easily fit within those devoted to gender or cultural difference. Herring knitted a coat of clear tape to honour his friend, a playwright and drag performance artist who died by suicide during the Aids epidemic. The tape is visibly yellowed and brittle where the garment folds outwards towards us, a patina of age that makes the work familiar to anyone whose clothes have disintegrated over time. It is a poignant reminder of life’s ephemerality, whether human or inert material, premature or otherwise. The capaciousness of the show’s categories allows for their endless reconfiguration or substitution; community, for instance, could have worked effectively here as well. 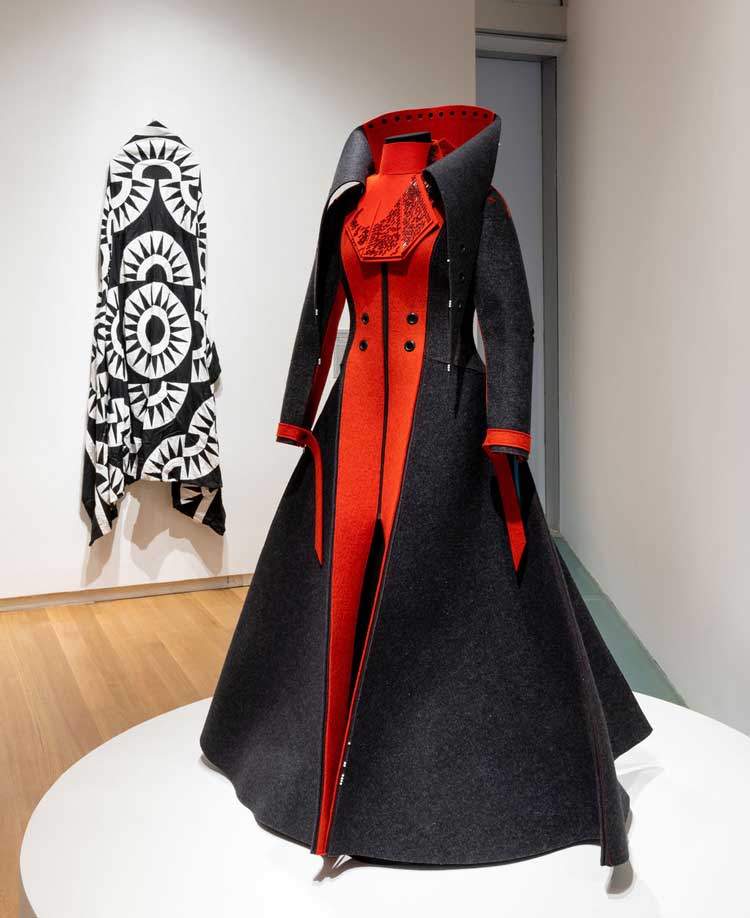 Multiplicity, cultural crossover and genre-bending operate not just as a curatorial method but within individual works. For Untitled (2017), a conceptually powerful and magnificently fabricated A-line coat in charcoal and red felt, Tanis S’eitlin found inspiration in a Chilkat robe – a type of Tlingit (Indigenous Alaskan) regalia made by her mother – as well as a second world war-era Vogue pattern. 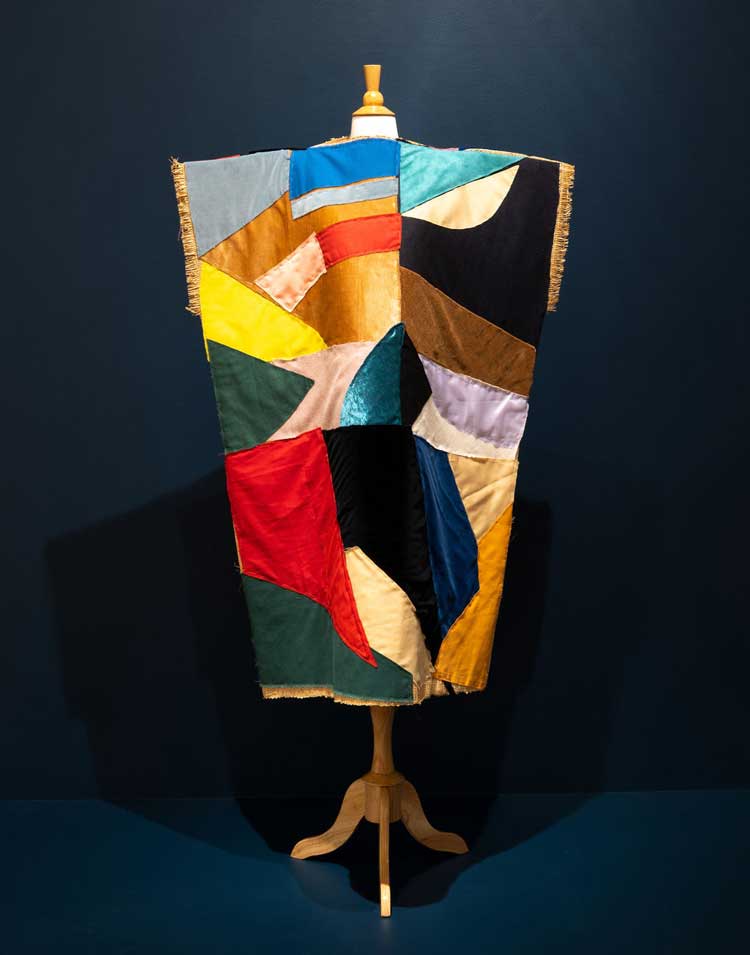 Similarly, French artist Karina Bisch’s Costume Sonia (2014), a nearly heraldic patchwork of coloured fabrics, pays tribute to the European abstractionist Sonia Delaunay and, as such, exists between painting, performance and costume. Hunter Reynolds’s Patina du Prey’s Drag Pose Cage (1990) addresses cultural malaise with gender non-conformity; the artist performed as his “half drag” alter ego wearing a cobalt gown in a go-go cage suspended from an art gallery ceiling, only to be met with aggression (here, the cage is stilled, containing the gown but not Reynolds). The dual orientation towards the future (of performance) and the past (of cultural tradition, historical context, or remembrances of lives lost) runs through Garmenting’s artworks like a tightly woven braid. 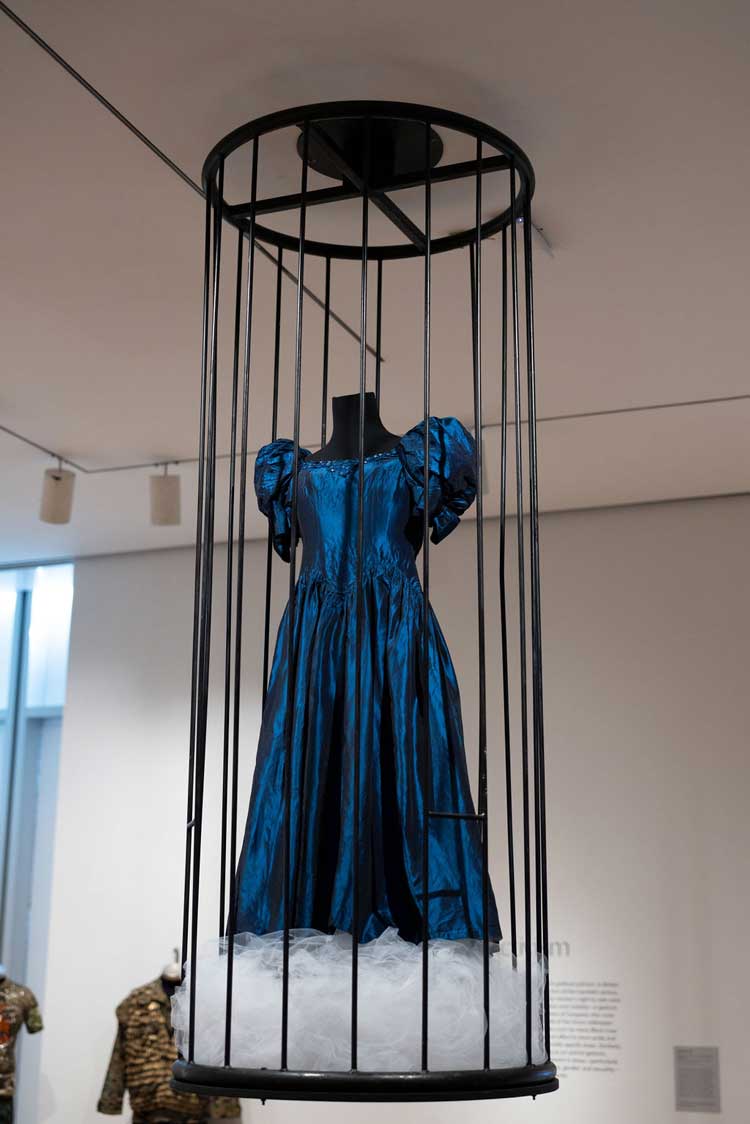 One result of Garmenting’s global framework is that it allows the audience to imagine a broad range of bodies in the garments it presents, since bodies are absented from representation except when (seldom) documented in photographs or films of past performances, or when we are allowed to wear the works, as I did for an activation of Walther’s Werksatz (1963-69) on the opening weekend. Given the absolute centrality of embodiment, identity, and even, most prosaically, the structure of the human form as an armature for the works on view, this exhibition presents an occasion to examine critically what we mean when we talk about “the body”. 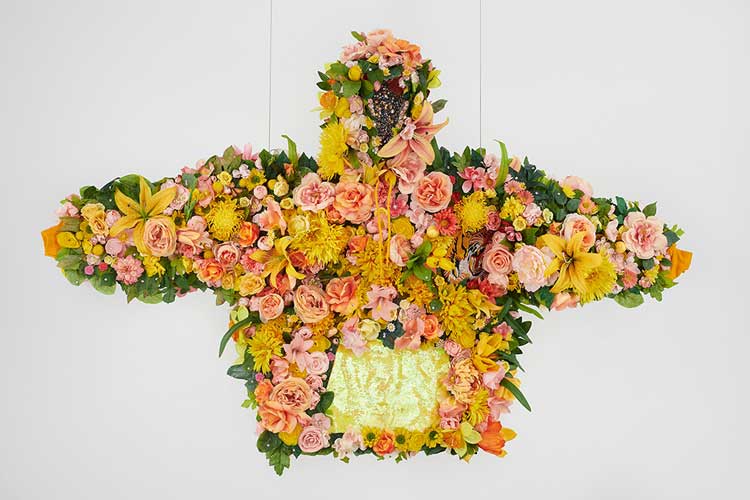 In some instances, artworks reference particular individuals: the enflowered hoodie of Devan Shimoyama’s February II (2019) is a homage to Trayvon Martin (the unarmed black teenager murdered in 2012 by George Zimmerman, who claimed to have been acting in self-defence) while Yinka Shonibare’s hunched figure with outstretched, searching hands in The Ghost of Eliza Jumel (2015) denotes the titular figure, a wealthy widow who married Alexander Hamilton’s assassin Aaron Burr. Despite this specificity, both sculptures imply shared experiences among the groups of which each was part; African-American youth subjected to unwarranted violence due to unchecked racism, or elite social figures enriched as a result of the labour of enslaved people. Art has a way of succinctly widening the perspective without descending into generalisation. 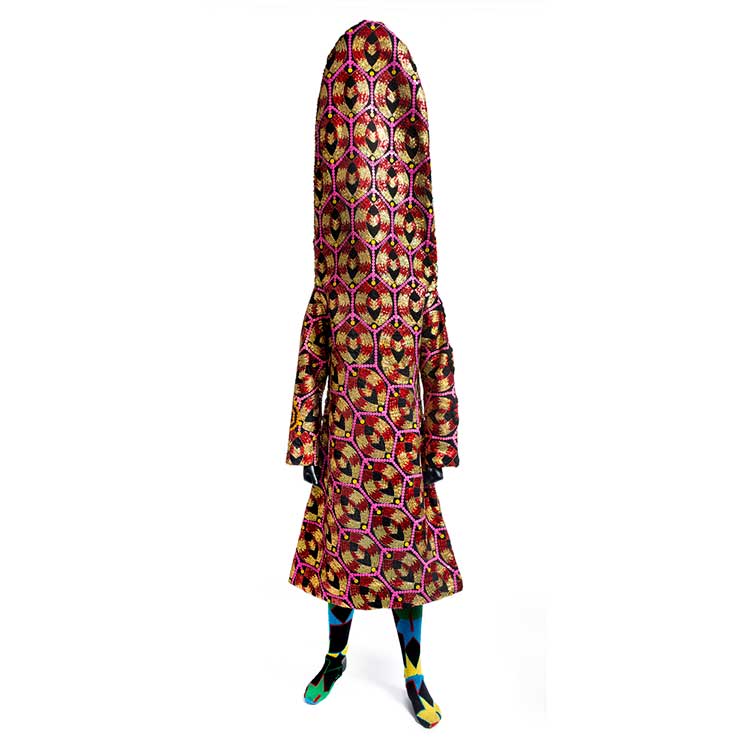 Artist Gordon Hall has written elsewhere that the term “bodies” does not flatten difference as do the monolithic assumptions held within the singular “the body”: as Hall proposed, “wherever there are bodies, there is the possibility, even the guarantee, that there is difference. Our use of language should reflect this.” This is a helpful additional layer to the structural intervention the show already makes, beyond one catalogue chapter’s discussion of the uncanny projection, per Sigmund Freud, of an imagined being into a garment’s blank space. (Didactic materials also should have explicitly linked the performance of art with the performance of identity by theorists such as Judith Butler, a connection that remains assumed.) Indeed, Schwartz’s definition of garmenting as a critical term is in itself an important contribution. As she states clearly in the catalogue, after defining garmenting physically as “three-dimensional objects incorporating clothing, rather than two-dimensional images depicting clothing”, it is “critical in nature, scrutinizing the role of dress in shaping aesthetic practices, individual and group identities, and social, economic, and political relations”. 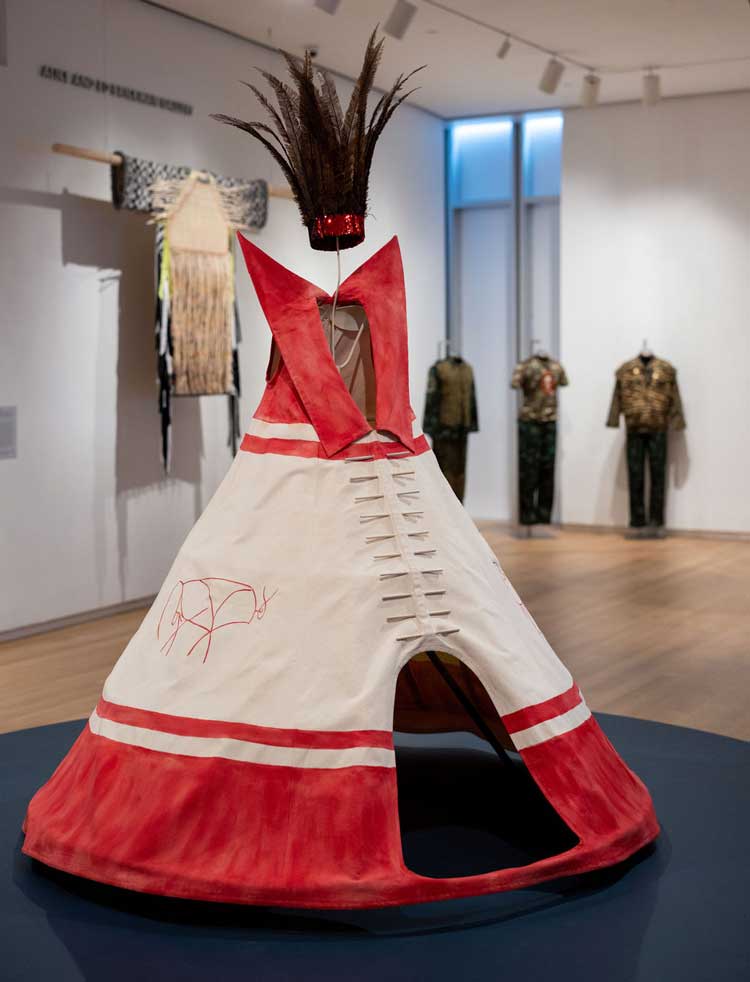 Because garmenting is less thoroughly theorised than other medium-specific artistic practices (its foil would be history painting in a Euro-American art historical tradition), it begins from a different footing than well-canonised art forms. This makes it possible to centre a range of voices in building its foundation, proposing coherence where none has been acknowledged before, rather than centring those voices in order to supplement or supplant an established, exclusionary narrative. Indeed, the exhibition’s textual materials suggest that multiple points of origin and sources of inspiration are part and parcel of garmenting’s ontology. To cite one example, in the catalogue introduction’s history of garmenting, Schwartz shows that its most crucial contributions have been made by women and especially those women who are black, indigenous and people of colour: Liubov Popova’s Design for a Dress (1924), Atsuko Tanaka’s Electric Dress (1956), Yoko Ono’s Cut Piece (1964), Yayoi Kusama’s Suit (c1962), and Lorraine O’Grady’s Mlle Bourgeoise Noire (1980-83). Furthermore, Garmenting’s texts show that conclusions reached within recent decades by critical theory have long been present but underacknowledged in non-western systems of thought. We learn, for example, that Cree-Canadian artist Kent Monkman’s Miss Chief’s Tipi Dress (Red) and Headdress (2019), which the artist wore for a live performance at the Metropolitan Museum of Art in the guise of his alter ego Miss Chief Eagle Testickle, reflects an ambiguous third gender within the Native American Two-Spirit tradition. Foregrounding such parallel paths to kindred explorations of identity strengthens Garmenting’s premise. Yet another indication of its pertinence would be the number of consistently younger artists – Kevin Beasley, Rose Nestler and Ye’ela Wilschanski – whose artworks might constitute its next chapter. 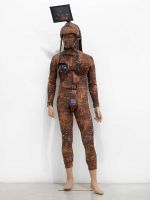