From Ear to Ear to Eye: Sounds and Stories From Across the Arab World

From Ear to Ear to Eye: Sounds and Stories From Across the Arab World

Music is a powerful force for opening hearts and minds. This immersive, sound-infused show at Nottingham Contemporary is an attempt to peel away the prejudices and stereotypes that prevail in Europe when it comes to parts of the Arab world that – these days- are more typically associated with conflict.

If you are lucky enough to enter Jumana Manna’s (b1987, US) feature-length film at the point where the various traditional Kurdish, Armenian, Moroccan or Yemeni musicians she has tracked down and recorded start playing, then you will see exactly why she has titled it: A Magical Substance Flows Into Me (2015). 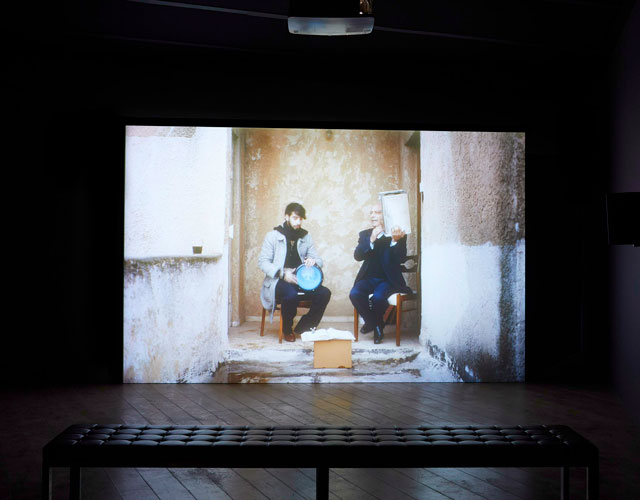 To observe the quiet rapture, the total absorption on the faces of these musicians as their rich tones and complex rhythms erupt from the screen is to feel intensely connected with the best of what unites us as humans, whatever our ethnicity or background. Rarely does a feature-length artist film compel me to stay rooted for its duration, but it feels a privilege to witness her odyssey through Palestine’s multiple musical and ethnic influences, and her parents’ East Jerusalem neighbourhood; weaving universal narratives through moments of informality and community into the mix, she coaxes these modern-day maestros to perform a response to a set of vintage recordings she plays them, which were harvested by ethnomusicologist Robert Lachman in the 1930s for his radio show Oriental Music. He recorded them for the then British-run Palestine Broadcasting Service to create an archive of vernacular traditions which, he hoped, might form a bridge between Arab and Jewish identities. What has happened to these musical traditions and these communities in the intervening years slowly becomes apparent. 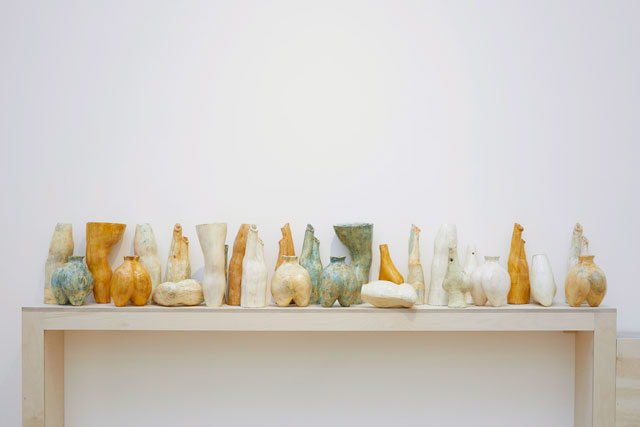 Nearby, the voluptuous vessels placed by Manna on a shelf – called A Stage for Any Sort of Revolutionary Play (2016) - seem to resonate just as loudly with the silent provocations of their pointed finger-like or fleshy buttock-like forms.

A very different kind of sonic power is wielded in Earshot (2016), by Lawrence Abu Hamdan (b1985, Jordan). Abu Hamdan, now based in Berlin and Beirut, is part of the department of forensic architecture at Goldsmiths, University of London – he calls himself a “private ear” rather than “eye”. In that capacity, he was able to provide audio-ballistic analysis of gunshot sounds that helped to convict two Israeli soldiers of shooting to kill two young Palestinian teenagers. They claimed to have used rubber bullets, but thanks to CNN’s filming of the riot where the shooting took place, Abu Hamdan was able to analyse the sounds to prove conclusively that they fired both live and rubber bullets. 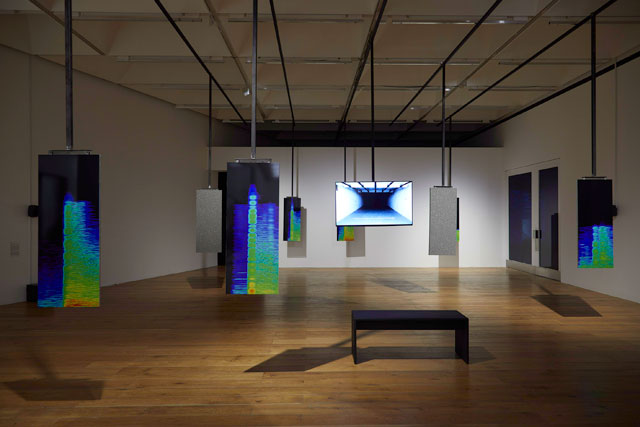 For this work, Abu Hamdan fills a darkened room with various pieces of evidence, which dangle from ceiling tracks on metal posts, while a film replicates this setting but shows these same items to be vital pieces of evidence for the hearing. There is no sound other than the grinding of the metal tracks on the film, as they move towards or away from the camera, at the appropriate moment in the script, while the full trial is reported, silently, in captions at the base of the screen. We don’t even hear the incriminating sounds, but somehow those gunshots reverberate in our heads.

In this context, listening is a political act. And this show is all about that power. Sam Thorne, co-curator and Nottingham Contemporary director, says: “How do we think about this region, often transmitted to us through conflicts, migration or trauma, things that are very difficult to think of from our removed point of view. What does listening do that looking cannot?”

Listening is a powerful way of placing yourself somewhere you have never been, as the installation in the building’s stairwell, by Malak Helmy (b 1982, Alexandria) shows. In August 2013, during a month-long lull in hostilities between Egypt’s rival factions, Helmy attached a recording device to a homing pigeon and sent it to specific sites: one where a pivotal second world war battle occurred; another a port that witnessed the exodus of foreign communities in 1956; another the site of a meteor shower, which turned a part of the desert into glass. It is amazing the power that these crackling, spitting recordings have (even though they mostly record the winds the pigeon battled through on its way to the destinations) to conjure presence and narratives in our imaginations. The work is titled Music for Drifting (2013), and Helmy calls it “A bird’s eye view of post-revolutionary Egypt”. 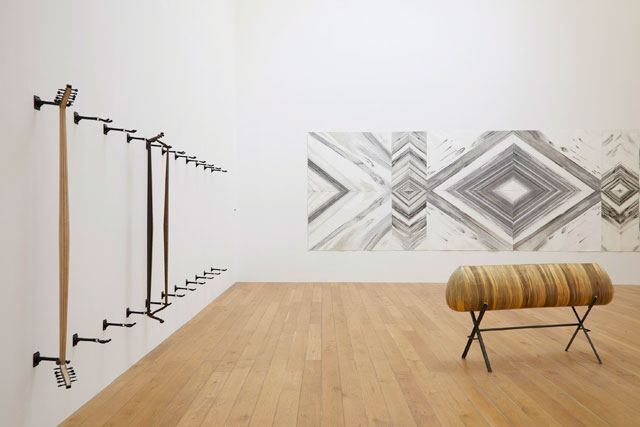 Haig Aivazian, Hastayim Yasiyorum (I Am Sick But I Am Alive), 2016. Courtesy the artist and Sfeir-Selmer Gallery, Beirut/Hamburg. Installation view, From Ear to Ear to Eye, Nottingham Contemporary, Dec 2017- Mar 2018. Photograph: Stuart Whipps.

Haig Aivazian (b1980, Beirut) uses silence in a sort of protest at the corruption of traditional Turkish music in the 20th century when, after the collapse of the Ottoman Empire, a new hybrid version emerged, often combining operatic voices with traditional Turkish instruments and compositions. In Hastayim Yasiyorum (I Am Sick But I Am Alive) (2016) In this site-specific iteration, he presents us with three versions of silenced, but beautiful traditional instruments. They are ouds but they are not ouds: made by the same master craftsmen who make the genuine article, one is a ridiculously elongated version, laid flat on top of a case that looks more like a coffin; another has no aperture or sound board, and is turned belly down so it is more like an enclosed and glossy canoe; another takes the neck of the oud and then adds another neck to it, and nothing more. 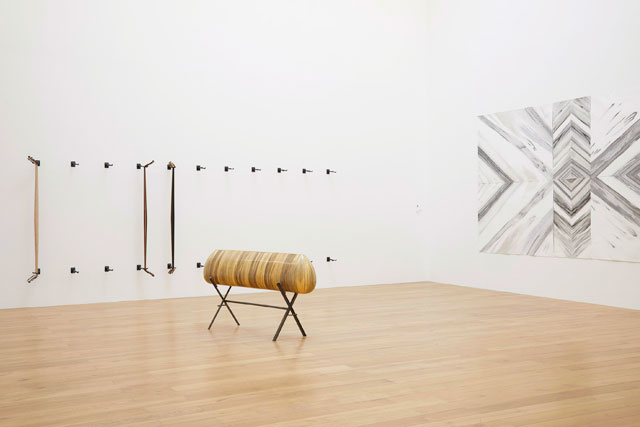 Haig Aivazian, Hastayim Yasiyorum (I Am Sick But I Am Alive), 2016. Courtesy the artist and Sfeir-Selmer Gallery, Beirut/Hamburg. Installation view, From Ear to Ear to Eye, Nottingham Contemporary, Dec 2017- Mar 2018. Photograph: Stuart Whipps.

A companion piece to these silenced ouds is a large wall installation, resembling a jigsaw of marble slabs. The piece seems unresolved as an artwork, although its backstory is chilling: it is inspired by the Turkish government’s decision in the 1930s to rip out an Armenian cemetery from the edge of Taksim Square so that it could build the Istanbul Radio HQ there – a silent community dispersed to make way for the sound of modern Turkey. Many of these pieces of marble were reused, incorporated into Istanbul’s modern buildings. The idea of this gesture’s invisible legacy is a powerful one. 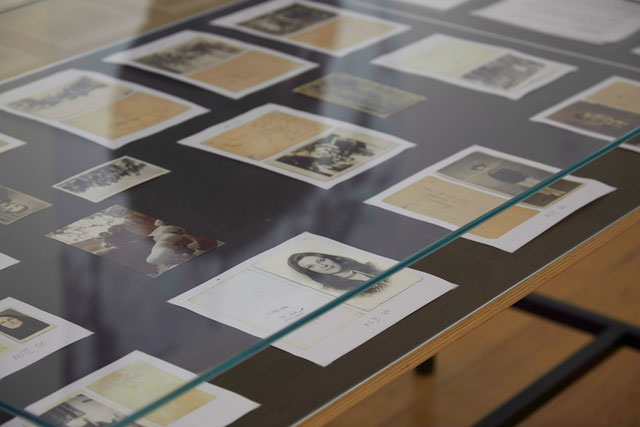 On the subject of legacies, Ania Dabrowska, who was born in Poland in 1973 and now lives in London, has a particular interest in the political and creative potency of archives within contemporary culture. While on a SPACE residency at the Arlington hostel for homeless people in Camden (2010-12), she encountered Diab Alkarssifi, a Lebanese-born photographer and collector who presented her with two plastic bags stuffed with photographs, film and negatives. It was part of a larger archive he had put together, from personal and also found artefacts, spanning more than 100 years of Lebanon life. The other half, he told Dabrowska, was back in his home town of Baalbek, and in 2013, she undertook her first trip to the region to try to unearth this companion archive, but also to connect the life of this man with the places and spaces his archive recorded. For the Nottingham Contemporary show, Dabrowska has created an immersive installation of multiple archives. A Lebanese Archive (with the collection of Diab Alkarssifi, c1890-1992), includes her own photos of the places she visited, as well as a three-screen rotating display of 1,500 images, both archive and contemporary, and vitrines showing Alkarssifi’s original prints accompanied by her notations and codifications for the book she went on to publish, in conjunction with the Arab Image Foundation.

Ania Dabrowska: ‘By the retelling of archival stories we have the power to articulate new ideas of how we want to formulate our own identities’

Being surrounded by these images of strangers – so many of them, undoubtedly, beloved friends and families, and treasured moments from other peoples’ lives - the mind is irresistibly drawn to make connections, to try to conjure up narratives for them from your own resources. Dabrowska says: “I think there is something in the power that archives give artists … and it goes beyond the looking back and referencing the old. There is some kind of agency that we possess: by the retelling of archival stories we have the power to articulate new ideas of who we want to be identified as, or how we want to formulate our own identities.”

There are many layers of connection between these works and also the regions they reference. Dabrowska’s installation is placed next to hazy images of Beirut’s now horribly polluted and overdeveloped coastline, taken by Ziad Antar (b1978, Lebanon, based in Beirut). Intensive Beirut II is a series of photographs taken from a boat, using an accordion camera of the 1920s. These out-of-focus shots, speckled with dirt and dust, are disorienting. The dark skyscraper silhouettes loom into the stormy sky as if emerging from battle smoke. The horizon lurches alarmingly, a queasy, unbalanced landscape. This stretch of water is exactly the stretch that Dabrowska ended up examining, under a microscope, from a photo in Akarssifi’s archive, the blown up result of which is exhibited here, blemishes, dust and all.

A sense of reaching across time and geography pervades this show, and playfully so in Ruins in Space (2014) by Raed Yassin (b1979, Lebanon). Taking a framed portrait of legendary Egyptian singer Umm Kulthum, whose live radio broadcasts are said to have brought the whole of Cairo to a standstill, Yassin places a speaker over her mouth, from which emerges a crackly recording of one of her most famous live concert performances, as if being received in (or transmitted from) space.

Thorne, who was director at Tate St Ives before coming to Nottingham, co-curated this show along with Angelica Sule. He spent a great deal of time in Beirut 10 years ago, and then in Istanbul between 2010 and 2012, as a contributing editor at Frieze magazine. He has known most of the show’s 17 artists since that time. There is a particularly strong showing of Lebanese artists, I point out, even if they now live in Berlin, London or New York. Thorne says: “Beirut remains one of the artistic hubs of the Arab world, despite its ongoing precariousness … In large part, it’s because of the very central role that artists have played in building the scene there, in establishing galleries and institutions, such as the Arab Image Foundation. What was clear from my first visit was so many artists active in Beirut were also musicians. Raed (Yassin) is an example; he has a duo, a record label. There’s a fluidity (to the scene), a little like Glasgow. Like a lot of smaller but fertile cities, there’s not so much of a division between art and music. Part of what’s going on in the exhibition grows from that.”

Thorne is hoping that the strong musical components will lure non-traditional gallery visitors: “I have often been drawn to artists who work with music. And I have always been pleasantly surprised by the way that music draws people who may not be interested in art into an exhibition.”

The flexibility of this sprawling, 2009 Nottingham Contemporary building (by the UK’s go-to gallery architects Caruso St John) creates an ideal, spatially differentiated setting for such diverse sonic and aesthetic landscapes, as was shown in the huge – and hugely successful - The Place Is Here show, earlier this year. Thorne says: “We are of a scale that can really generate interest, unearthing things that are not getting the exposure they should be getting in museums and galleries in the UK. It’s a big part of what we’re planning to do in the next couple of years.” 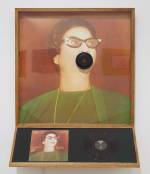