In a posthumous retrospective of the drawings and sculptures of Fritz Wotruba, the souls of the inanimate are evident as he revives our view of an earlier master

Every creative process, especially those we regard as natural or universal, is subject to innumerable unseen influences. We might take the struggle with the blank page as an inevitable human melodrama, but there are many languages that contain no terms for such conditions as writer’s or artist’s block. This is partially because of our prevailing cultural conception of the artist as an individualist genius wrenching brilliance from nothingness, a view that chimes with the equally hubristic “Great Man” view of history. In reality, creativity is very often the opposite process; the whittling down of a chaos of information from multiple sources to a refined coherence. It may appear unromantic, but it is often more a process of editing and extraction than some miracle of parthenogenesis.

Michelangelo Buonarroti is one of those touched supposedly by the hand of God as a kind of Renaissance saint, even though he continually emphasised that his achievements were hard-earned. The artist left us a vital clue as to the real origins of his brilliance in his series of sculptures that became known as The Prisoners. These statues are haunting, mesmerising works, in which the half-finished writhing figures seem to be for ever trying to wrench themselves free from the stone. The illusion, of course, is that they are the stone, and Michelangelo was a genius not for what he added, but for what he removed. In doing so, he revealed, perhaps in unparalleled terms, the vast potentiality that lies within things and the ingenuity needed to bring it out.

Marking the 450th anniversary of Michelangelo’s death, Fritz Wotruba’s Homage to Michelangelo series at the 21er Haus poses and answers a vital question. How can we respond to a genius whose all-encompassing brilliance seems almost tyrannical, rendering us either mute or resorting to cliche? The key is to embrace the aspect of fiction to all critical and historical appreciation. In 65 sketches and eight sculptures, many of them made just before his own death, Wotruba sets up an overt invented dialogue with the earlier artist, which is essentially what we all do when viewing an artist’s work beyond a passive state. He does so in an idiosyncratic style that captures his own talents as well as helping us to see his predecessor in a new light, with the grandiose original creations morphing into fevered sketches and sculptures that seem like paradoxically archaic modernist ruins. It is as if Wotruba sees and unearths further works within Michelangelo’s works, just as the latter saw mythic figures in slabs of marble. “Beauty”, as Michelangelo once said “is the purgation of superfluities.”

As you walking through the exhibition, there is the curious feeling that Michelangelo created the most exquisite human forms from stone and Wotruba has revived our attention towards himself and his predecessor by returning the figures partly back to stone. Wotruba expressly revelled in the idea of drawing and sculpture as primitive or rather elemental forms. His works are radical in the original sense of reaching into the roots. These are the building blocks of life, in a figurative and literal sense. It becomes interesting to note at what point his portraits lose a sense of humanity. At times, they appear figurative only in the sense that a granite monolith might assume an anthropomorphic form through chance and exposure to time and the elements. In a work such as Two Figures and a Torso (1958), we can only trust the artist’s word that these are humans at all. While the work lacks the direct sense of emaciated horror that pervades Alberto Giacometti’s post-Holocaust figures, the words of Primo Levi still enter the mind: “If this is a man …” If we see the Renaissance of Michelangelo as one of the peaks of human achievement, we are reminded here, too, of the depths. We may not deserve a David in these brutal times, though Wotruba gives us raw minimalist approximations. Perhaps we never deserved it even in Michelangelo’s day but we may, given what happened in Wotruba’s lifespan from 1907 to 1975, have earned a Pietà.

There is a sense of striving to get to the essence of existence in Wotruba’s work and he resists fashionable despair. He assumes there is an essence to get to. The basic forms are beginnings as much as ends, and the vigour with which they were conceived give them a striking energy. They are reminiscent of golems or the original robots of Czech myth (Seated Figure – The Thinker 1948, for example), just barely invested with life but living nonetheless. They may be minimalist, but they are not empty. There is a raw sensuality to sketches such as Sitter (1944) that varies between vulnerability and flagrancy. This evolves, in a sketch from the same time and on the same subject, with startling violence. These moments perhaps substantiate his friend Elias Canetti’s claims that Wotruba was drawn to art as an escape and an explanation of a childhood witnessing his drunken, violent father and delinquent brothers. Might there be also suggestions of the bunkers and monuments built according to ruin value that defined the Nazi regime he fled from? There is, nevertheless, a lucidity and harmony to his sculptural works in spite or in defiance of all this. His Lying Person (1951) is Henry Moore in the age of Trümmerliteratur and his female nudes are Venuses of the air raids.

It is said that Wotruba sketched from the Old Masters as an apprentice, aiming to capture the soul or spirit of the works in simplified forms. This matches his stunning Church of the Most Holy Trinity in Vienna, where Chartres cathedral was not so much reduced to cubes as had its essence brought out and reconfigured. It is, perhaps, an impossible task to capture the soul of a masterpiece but it is a worthwhile one, not least because it suggests to us that these things are inherently unfinished and can be renewed. These are post-apocalyptic works in appearance alone. At their best, they prove that great art is not a definitive statement but a continually evolving dialogue. In this sense, those figures squirming to release themselves from the stone or hastily sketched in ink are alive after all. 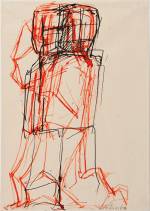 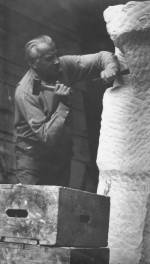