Frieze London 2015 reveals buyers’ anxieties, a swell in the Asian market and an increased focus on live art

“Look at that picture, how does it seem to you now … Does it seem to be persisting?” So reads the neon script of one of Welsh conceptual artist Cerith Wyn Evans’s typically pithy sculptural meditations. Featured high up on the external wall of White Cube Gallery’s booth at this year’s Frieze Art Fair in London, it seemed to function as a clever and subconscious reflection on the key question for collectors at Frieze and the world’s many other art fairs. In an enormous, artificially lit tent filled with a sea of contemporary art, what persists? What captures and holds attention, proving itself worthy of acquisition?

As is customary at Frieze, sensation abounded. There was artist Ken Kagami, who sat at a drawing desk creating impromptu comic depictions of fair-goers’ genitals on the basis of a long hard look at their face. Wandering ominously through the tent were the Siamese Hair Twins, a pair of 11-year-old girls whose long wigs were tied together – the “creation” of Brazilian sculptor and performance artist Tunga. Yngve Holen’s impressive installation at Stuart Shave/Modern Art presented a row of washing machines topped with plastic aeroplanes and backed by large Rothko-style pixelated coloured canvases on the wall behind. And if you got tired of the fair and tired of life, there was AYR art collective’s enclosed bedroom areas in which visitors were invited to lounge and charge their phones.

It was performance that stole the show this year, with the fair’s Live section burgeoning in its second incarnation. A director at a prominent European gallery told Studio International that this was helped by the nearby Frieze Masters, which was launched in 2012 and covers art from ancient times to the mid-20th century: “Lots of galleries that were at Frieze last year have made the move over to Frieze Masters this time, which has left more space for live and performance art here at the contemporary fair.”

She also observed a change in the collectors visiting and buying at Frieze: “There seem to be fewer American collectors at the fair this year compared with 2014, and more Chinese, Japanese, Korean and Indian collectors. This reflects the fact that there are more Asian galleries present this year.” The increased number of Asian galleries was matched by their quality: Shanghai’s Leo Xu Projects offered an excellent – although very cramped – group show of the work of emerging artists in which huge mirrored screens bearing printed images of landscapes vied for position with quieter works, such as a composition made up of hundreds of rows of tiny brown-paper squares with their bottom left corners delicately curled upwards and aaajiao’s vertical sequence of smartphones collectively displaying a video of a long stream of water.

The fair was not lacking in impressive presentations by established galleries and artists: Berlin’s Contemporary Fine Arts offered mixed media works by Anselm Reyle and Franz West alongside a number of pieces by Günther Förg, including several of his coloured abstractions and a monumental yet intimate colour self-portrait photograph. New work by the Danish-Icelandic sculptor and installation artist Olafur Eliasson gleamed brilliantly at Tanya Bonakdar, including Polychromatic Attention 2015, a series of large glass globes shown in a circle on the wall that collectively presented the colours of the light spectrum but appeared clear when seen from the side.

Trend-seeking at Frieze always throws up odd visual resonances that once noticed are hard to avoid. This year, fruit and vegetables seemed to recur from the outset. Visitors were greeted on entry by Darren Bader’s giant aubergine on legs at Sadie Coles Gallery. A sad-looking green potato with a knife stuck into its side hung majestically from the ceiling of Galeria Fortes Vilaça while, not far away, was the Modern Institute’s rather overfilled booth, the centrepiece of which was a V-shaped hanging line of shiny green apples by Urs Fischer.

Such an arbitrary and superficial drawing together of works may act as a mirror for the behaviour of collectors at this year’s fair. With the art market in bad shape and sales slowing, the meaning and value of contemporary art is inevitably being called into question. The aforementioned European gallery director, who has attended the fair for the past six years, observed a notable change this year in collectors’ approach to buying, especially with respect to new artists: “Collectors are less interested in sitting down with us and really learning about an artist they don’t already know about, which they used to do even last year. There’s an anxiety about contemporary art and it losing value, and so collectors are making faster decisions.”

The sheer number of art fairs and their often-generic nature may be regarded as a further threat to contemporary art’s cultural and financial value. Yet for those of us not involved in the commercial side of the art world, Frieze and its sister fair Frieze Masters continue to provide the chance to see artworks that are rarely shown publicly and may not be seen again if they end up in private collections. Despite the steep entry fees, there’s arguably a democratic side to Frieze as an exhibition and an event that cannot be dismissed, and one that will hopefully remain even as the practice of collecting waxes and wanes. 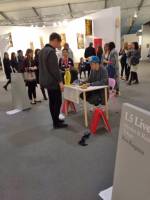 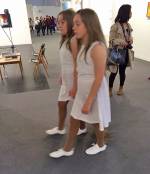