As environmental changes affect more areas of the world, our lifestyles need to be more sustainable. Looking back over 400 years of fashion history, Fashioned from Nature asks what humans have done wrong and how we can innovate to improve 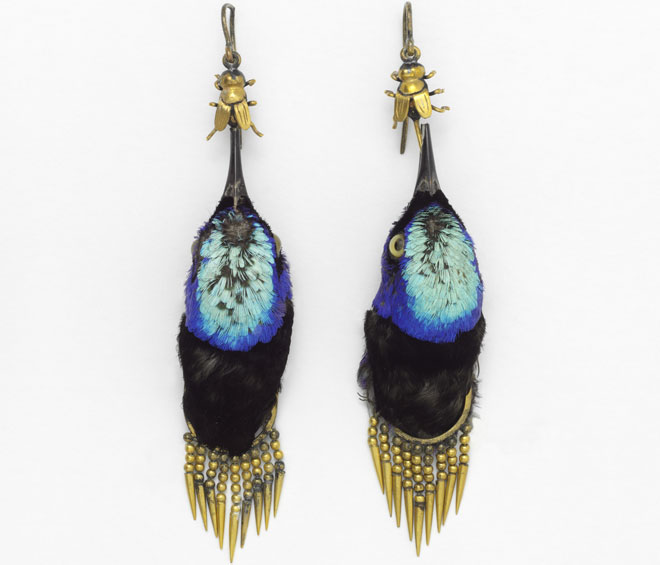 Following several popular fashion exhibitions at the V&A, the museum’s new show, Fashioned from Nature, takes a more critical stance on the ethical practices and environmental costs of clothing and design. An exhibition of two distinct strands, one half solidly rooted in historical material and the other lauding the innovation of today, it asks essential questions of us about where we expect our clothes to come from. Despite showcasing an array of beautiful and experimental designs in the contemporary section, the answer to these questions seems to be that, unlike in the cottage industries of old, sustainable fashion is still out of reach. 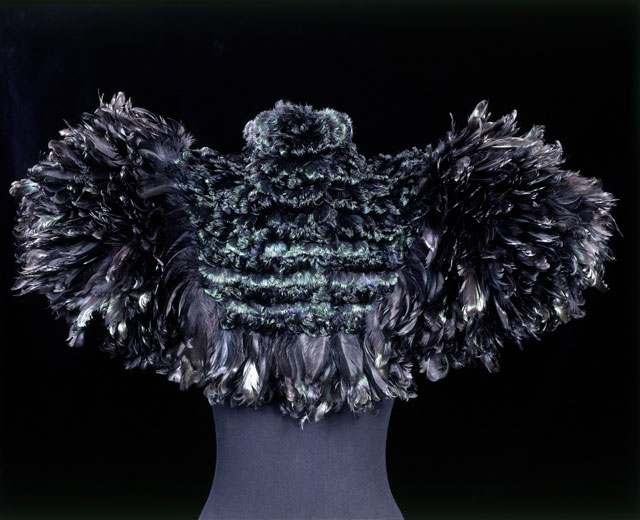 The exhibition’s split is partially architectural, with all the pre-20th-century items shown downstairs in a dark, circular gallery, whereas, upstairs, the collection dates mostly from the 1970s on and is shown in better-lit and more linear arrangements. It is also methodological. Downstairs, historical items are grouped by material: silk, wool, flax, feathers and more. There is stunning embroidery and skilful weaving that demonstrate how nature inspired design in fashion and textiles. Unlike upstairs, the clothes are not shown alone, but are displayed among various documents: monochrome photographs; copies of natural history volumes, such as Thomas Muffet’s 17th-century entomological textbook, Theatre of Insects; press cuttings including 19th-century clippings that describe and satirise protests against animal products. It is as though the historical clothes sit within a body of evidence wanting to prove that the past did it wrong and treated other animals and our shared planet in ways that we have moved beyond and distanced ourselves from. An x-ray of an 18th-century bonnet revealing the whalebone that structures its rigid shape compounds this sense of evidential display: it is forensic at points.

And judging by certain objects, chastisement is necessary. In Europe during the late-19th century, tropical birds’ heads made dainty earring pendants, and a collection of prints show countless uses for animal deposits in Victorian British culture: oils, food, fabrics and perfumes that formed their human material world, all derived from the capture and slaughter of wild and agricultural animals.

Without mentioning it, Fashioned from Nature gestures heavily towards anthropocentric thinking – related to a recently defined new geological era in which human activity is understood to be be the dominant actant in environmental change – in its presentation of how the fashion industry has historically scaled its way into being a hugely polluting network of production, consumption and jettison.1 Throughout, the displays weave together the destructive consequences of clothing manufacture, from acid rain caused by the chemicals used to bleach cotton 200 years ago, the astonishing amount of water wasted along denim production lines, and the pervasive use of plastic variants to make textiles that has increased since the early-20th century. 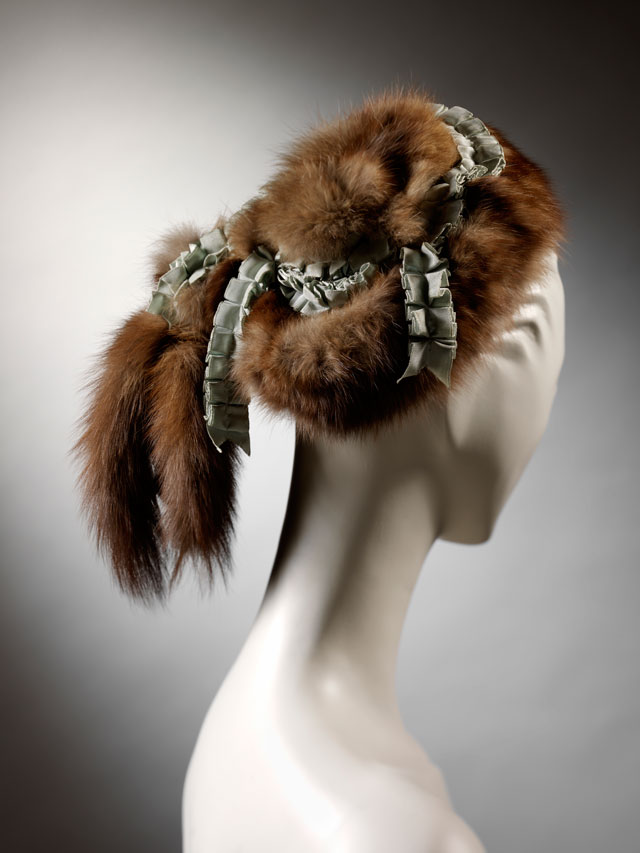 Interestingly, conversations about plastic waste have proliferated in the past months but very little has been said about the impact of the polymers that partially compose the clothes and other fabrics that surround us, but examples of 1940s viscose garments, prized for their ease of care and texture, illustrate the introduction of such practices. Nearby, surrounded by terrariums at the top of the stairs connecting the two exhibition’s two levels, Emma Watson’s 2016 Met Gala dress, made of fabric recycled from plastic bottles and designed to be worn in dozens of configurations, seeks to show changing attitudes towards the environmental impact of fashionable spectacle.

As a core element of the exhibition, the curators have identified several pressing issues facing the industry, with one being how to choose materials sustainably in which both activism and experimentation play parts. Aside from plastics, products derived from animals are an understandably hot topic, and on show alongside ephemera from David Bailey’s 1980s anti-fur campaign for Lynx is an “animal skin” constructed from thousands of beads draped over the torso and hips of a mannequin, a grotesque trompe l’oeil looking convincingly petrified. Elsewhere is a dress designed by Italian fashion house Vegea, which promotes using grape-waste from the wine industry as a leather-substitute. All of this sits in conversation with “authentically” animal items downstairs, to clarify efforts being made to stop the use of animal fibres in fashion. 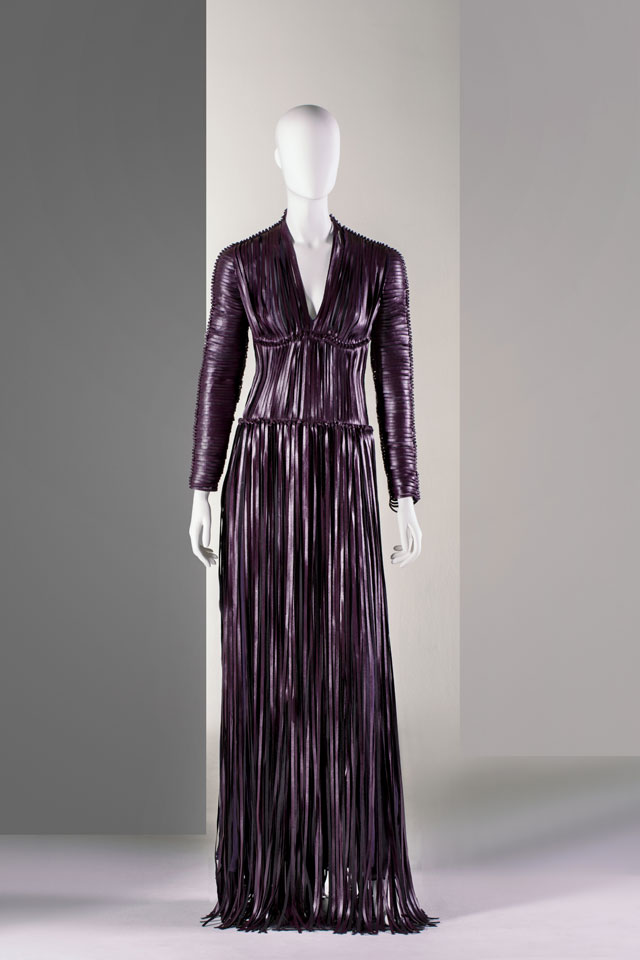 Grape dress made with Vagea, a leather alternative made from grape waste © Vegea.

Another key issue is the globalised nature of production. Intricately printed cottons made in 18th-century India for export to the UK, seen downstairs, provided a model for internationally sourced cheap labour; upstairs two T-shirts placed next to a map of their fabrication, lines zigzagging around continents, show the international journeys garments now take before being completed for sale. Adjacent, an interactive section allows you to handle familiar items – trainers or a white T-shirt – to trace the immense waste incurred from making basic items, and the environmental damage caused even in the care of our clothes. 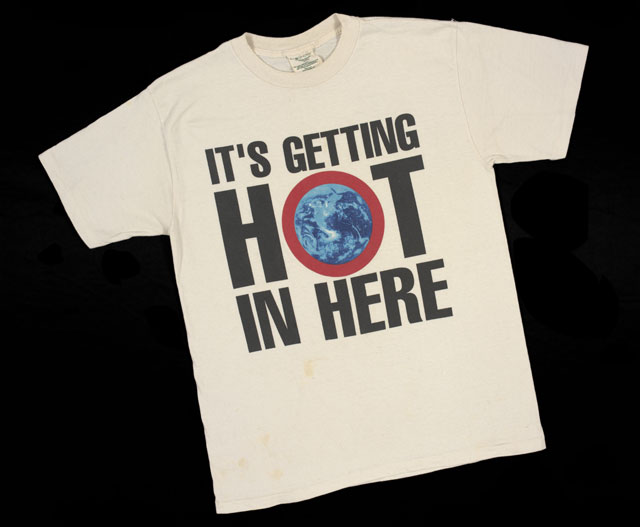 These are things that many of us don’t know, or choose to ignore. What this exhibition does very well is to make plain the composite parts and stages essential to manufacturing clothes en masse and forces you to think about the materials touching your skin at that moment. Although implicit, perhaps the elephant in the room is the lack of attention paid, among all the flora and fauna, to human labour within drives for sustainable production; but that is a gripe beyond the bounds of the V&A’s focus on nature with a capital “N,” that which is not human.

Outside the V&A, London is in the throes of a springtime heatwave, filling the city with sun where only a month before there had been snow; perhaps it has nothing to do with global warming but it seems odd nonetheless. With that in mind, it is exciting to see an internationally renowned art and design museum stage an exhibition that surveys at least some of the historical context to our ecological present, and go partway in thinking about how to change habitualised consumption for the future. I say partway, because, unless you have the means to fork out for handmade clothes, sustainable fashion is a far-off luxury – but, of course, that is not something the V&A can control. It is, nonetheless, important to see institutional engagement with environmental issues and recognition of the exploitation of other humans’ and other animals’ bodies to create items of beauty. 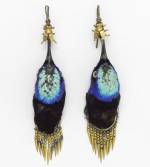 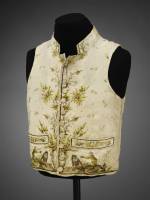