This exhibition of contemporary art from South Asia displays an impressive range of materials and styles, traditional and modern, but stays within an all-embracing fold of the ethereal

At first glance, the new exhibition at Leila Heller Gallery defies our habitual everyday thinking. After all, etymologically the word “ethereal” has nothing to do with reality – the “r” in the middle belongs not to “real,” but to “ether,” a Greek root referring to an airy substance located in the upper reaches of the atmosphere, furthest away from the Earth. As a metaphor, ethereal is used to describe a spirituality that is simultaneously otherworldly and intuitive, transitory and lasting. In the west, this kind of mental disposition has chiefly migrated to the realm of religion, having been pushed there by modernity’s relentless drive for material production. In art, it has been replaced by the surreal, a concept derived from Freud’s theory of the unconscious. In the east, however, where psychoanalysis has not grown deep roots, the ethereal is well and thriving, as demonstrated by this exhibition. Curated by Dr Amin Jaffer, international director of Asian art at Christie’s, it contains 51 paintings, works on paper, sculptures, photographs and video by 17 artists from South Asia – India, Pakistan, Bangladesh and diaspora. The exhibition sports a handsome catalogue with an essay by an art historian Deepak Ananth and a preface by the curator.

Jaffer defines ethereal as “extreme delicacy and light in a way that seems not to be of this world”.1 When he was asked to mount this exhibition, he knew which artists to invite, but decided on the theme only after prolonged discussions with a well-known collector of art from the region, Amrita Jhaveri.2 The task of finding a common denominator for the works on display may not have been easy because they vary greatly not only in their media, but also in their styles. Many artists in the exhibition explore the paradigm of the modernist grid. Rana Begum, for example, whose multicoloured geometric constructions line the walls of the first room to the right of the entrance to the gallery, uses the vocabulary of minimalism to investigate properties of colours and their combinations when she transforms the sparse regularity of Donald Judd’s rectangles into a busy decorative pattern. To convey the periodic nature and a possibility of infinite variations, Begum numbers her pieces. Her No 565 Bench and No 562 Fold, for example, are reinterpretations of minimalist cubes into her matter-of-fact, design-oriented approach.

In the central space, we are confronted with Rashid Rana’s enormous C-print War Within II, which is unfolding at a 90-degree angle on to two adjacent walls. The basic subject of the print was taken from the master of French classicism Jacques-Louis David whose Oath of the Horatiiin a double take – one for each wall – is discernible amid a grid of data interventions introduced into the image with the help of a computer. These bytes of visual information permeate the famous image but are indecipherable individually, making a mute commentary on the visual roots of language, its immanence in particular historical contexts, and adaptability to various contemporary situations.

Ayesha Sultana’s dense graphite drawings hanging in the same room appear to be as much about subtle gradations in texture and quality of the surface as they are about the variations possible within the strict geometry of the grid. Mohammad Ali Talpur’s drawings with technical pen, hanging alongside Sultana’s, are also about the grid, albeit altered and extended to the point of unrecognition, their regularity evident only in the alterations between black and white areas of the surface. Manish Nai’s paintings made of bunched-up burlap sacks and sculptures of corrugated cardboard belong to this category as well, because the artist arranges these common-place materials in regular grid-like patterns and codifies them using the conventional rectangular shapes of hanging canvases and free-standing sculptures.

The works I mentioned tend toward abstraction, but also reference processes of their own production, manifesting a certain tension between moving away from the formation of images and back toward it. In another group of works, recognisable imagery play a far greater role, making the ethereal quality transpose itself into the terms familiar to us as dreams and phantoms of our imagination. Ali Kazim, for example, paints himself as a faceless and featureless shadow silhouetted against a plain, indistinct background. The otherworldly quality of his monochrome images is accentuated sometimes by an appearance of a lonely cloud – a frequent motif in the works of surrealists. Using a refined technique of traditional miniature painting, Saira Wasim excels at delineating brightly coloured representational “clouds” hovering against a dark background and composed of contorted bodies of noted political figures.

Faiza Butt, in her series My Love Plays in Heavenly Ways, also draws on dream imagery as she depicts children riding dragons and slashing them with swords. Dilip Chobisa presents a series of drawings of haunted interiors, where the dark openings for niches, windows or doors make them look like sets of horror films. In a Cindy Sherman moment, Irfan Hasan painted a series of self-portraits following the lead of the greats: Self-Portrait after Diego Velazquez, Self-Portrait after Peter-Paul Rubens, Self-Portrait after Rembrandt … The artist shows himself donned in various hats and with period hairstyles, but bears the same non-smiling disposition, with an intense gaze directed at the viewer. This scrutinising examination can be unnerving, considering a complete lack of any pictorial context for these heads: they hover against a uniformly light background, severed from the body and devoid of anything that would give us a hint of the doppelganger’s human history.

The anxiety-inducing portion of the exhibition culminates in the back room of the gallery with the installation Surreal Pond by Sonia Khurana. In three videos that face each other on two opposing walls, we see a pond in a lush tropical setting. The video on a large screen that occupies one wall shows the water continuously evaporating from the pond, creating a cloud of mist with perpetually changing contours and configurations, triggering our imagination to consider the possibility of an otherworldly life gestating within the infinitely changing configurations of rising vapours. The other two videos of the same pool are dedicated to more mundane matters of our everyday, non-mysterious existence, such as people cleaning the pool of overgrown lilies.

Apart from the representational and the abstract poles within which the exhibition explores the paradigm of the ethereal, there are also impressive attempts by artists at finding their working style not by way of art, but in their daily lives. Such is the case with Noor Ali Chagani’s sculptures made of bricks, six of which are included in the exhibition. These constructions range in size, shape and colour – some are made from red terracotta bricks, others from grey concrete blocks; some resemble carpets or hanging cloths, others look like fragments of walls – but they all derive from housing construction styles common to Karachi and Lahore, cities in Pakistan where the artist lived. Speaking about his work at the opening, Chagani explained that, despite his training in traditional miniature painting, he decided to work with bricks because of an observation he made when he moved from Karachi to Lahore. In Karachi, the most populous city in Pakistan, he, like most people there, lived in a multistorey high-rise building constructed out of grey concrete and led a busy life, studying for a degree in software engineering. In the second largest city, Lahore, where the artist moved to study art, many homes are one-family, low-rise buildings made of red bricks; here, he could afford to have a roof over his head without sharing with others. Chagani codes his constructions in two different colours, depending on whether he refers to events taking place in Lahore or Karachi. He also uses language frequently in his work. For example, in The Wall 1, a piece made of concrete riddled with bullets, Chagani introduced a slogan common to street art in Karachi – “Long live Altaf Hussain!” – referencing a controversial politician, whose dominance is being challenged by multiple rivals. In other works, his use of language may be implicit, as when he writes graffiti on constructed walls and then breaks them up and reassembles the remnants of words and sentences in illegible configurations. Ultimately, Chagani’s message is about the solidity of the walls within which we live and which determine our lives – perhaps, it will serve us well if we let these seemingly impermeable structures become pliable and ethereal, having them connect us to each other rather than keep us apart. The entire exhibition appears to hinge on this premise. Sometimes reality must give way to dreams. 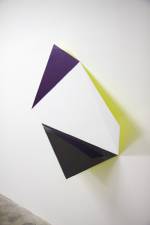 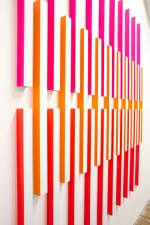