Equilibrium: An Idea for Italian Sculpture

Equilibrium: An Idea for Italian Sculpture 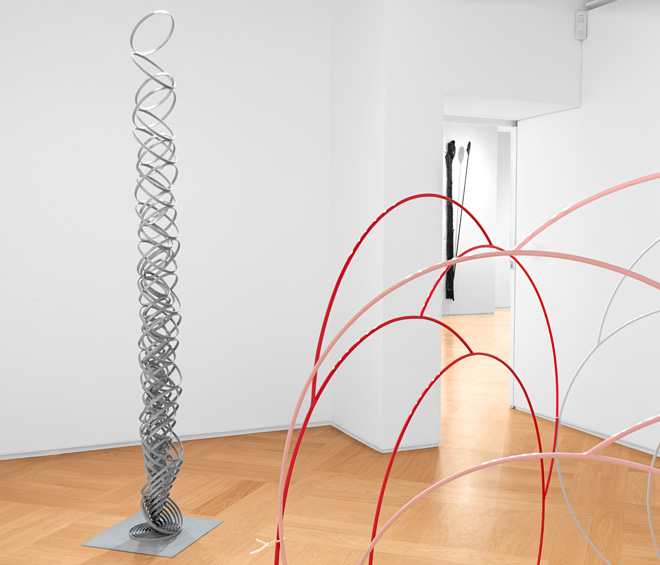 “Let’s fling open the figure and enclose the environment within it,” incited Umberto Boccioni in the 1912 Technical Manifesto of Futurism.

The exhortation to abolish spurious distinctions between the artwork and its surroundings was just one example of the historic avant-gardes unequivocally prefiguring the neo-avant-garde craze for encompassing the social environment into art, whether painted, sculpted, installed or performed.

The futurists also inveighed against sculpture’s orthodox materials: “Destroy the nobility, entirely literary and traditional, of marble and bronze … The sculptor can use 20 different materials, or even more, in a single work … glass, wood, cardboard, cement, iron, horsehair, leather, cloth, mirrors, electric lights, etc.” The enfants terribles ofearly-20th-century Italian art also repudiated the persistent, and what they deemed stultifyingly boring, centrality of the heroic nude in European sculpture. 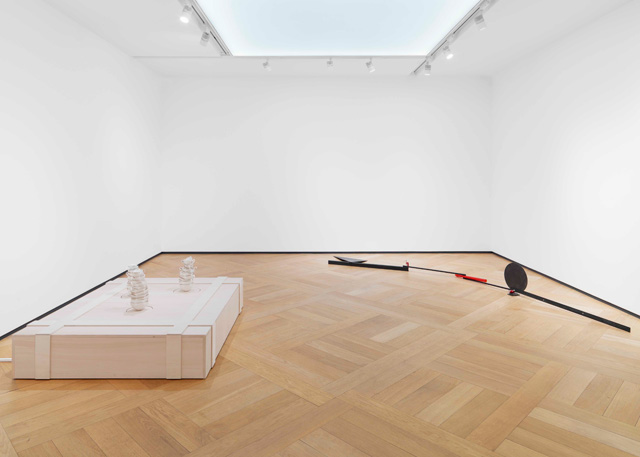 Italian postwar painting and sculpture – the distinction between the two increasingly blurred – was further revolutionised by later variations of related themes, notably in the elegantly literal opening of the canvas in Lucio Fontana’s slashed paintings, and, later, in arte povera’s embrace of all and any materials.

This lineage underlies an intriguing exhibition, curated by Giorgio Verzotti, of established and younger artists of three generations. These variegated works negotiate the concept and achievement of equilibrium in sculpture, in the most expanded sense of the term – an exception being Vincenzo Agnetti’s painted verbal definition of an Equilibrista (Tightrope Walker). If the balance of opposing forces is important in all art – the modernist Jean Hélion repeatedly experimented with visual equilibrium in drawing – in sculpture, it is often crucial to its successful execution, and the frisson of its precarious accomplishment pervades many of the works currently on display at Mazzoleni.

Fontana’s contemporary, Fausto Melotti (1901-86), similarly opened up sculpture, to the extent that in his work negative space becomes at least as important as its corresponding concrete form (a dialogue between the two artists was the subject of a 2016 show at Mazzoleni).

While sculpture often contends with the equilibrium of weight and mass, Melotti’s scintillating structures balance the most ethereal webs of metal rods and delicately curving surfaces. The fact that his rhythmically sinuous arrangements – often to be read horizontally like a score – are repeatedly described in musical terms is attested to here in the work’s title, Theme and Variations IX.

The focus on Italian sculpture, let alone its artistic primacy, is fortunately not too literal given the strongly international fluxes and correspondences within the historic and neo-avant-gardes and their aftermaths. Two Japanese artists are present: the virtuoso Shigeru Saito (b1974) and Hidetoshi Nagasawa (1940-2018). In contrast to Melotti’s lightness of touch, Nagasawa’s balancing act relies on the perfect equilibrium of slanted, mutually dependent slabs of marble (one of the “noble” materials loathed by Boccioni) that, astonishingly, appear to float despite their weight. Balance here is an active force that determines the immediate shape of the work.

Assembled sculpture and the integration of assorted found objects made of virtually anything became a major stream in the postwar avant-gardes, usually with early-20th-century precedents. Arte povera was Italy’s vital contribution in this redefinition of the limits of sculpture and is represented here by two of its original exponents, Luciano Fabro (1936-2007) and Giovanni Anselmo (b1934), and to some extent by younger artists working under a degree of their influence.

Luca Trevisani (b1979) plays with a whimsical assortment of materials in his assemblages, in this case a droll balancing act made up of a hefty ox bone, a lobster carapace, palm seed and an eggshell. The equilibrium here is dependent not only on stabilising absurdly contrasting forms of naturalia, but also on preserving natural elements subject to an inevitable process of decay, combining the wonder of a cabinet of curiosity with the matter-of-fact weight of sculpture.

In some of these works, the feeling that the state of balance could be imminently lost lends a ghostly kineticism to the space, as do the vibrations between the works, some of which are site specific. In Verticale by Remo Salvadori (b1947), an edifice of discrete glass elements poised on a tautly folded copper sheet, the equilibrium feels particularly, and poetically, precarious, as if on the brink of collapse.

In the intricate work of Elisabetta Di Maggio (b1964), too, there is an air of vulnerability, as well as an unequivocally kinetic element. At Still Point of the Turning World consists of delicately tactile porcelain cups, made by the artist, stacked up and preserved by bell jars. These rotate on a turntable, accompanied by the sound of a music box, in a curious and graceful depiction of uncertain stability in a perpetually turning world. 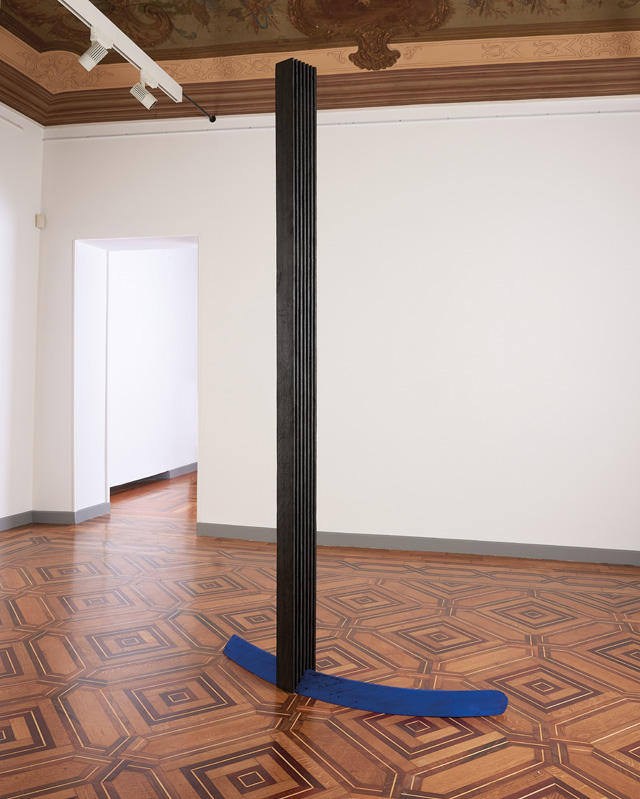 In contrast, the compelling, charred wooden sculptures of Nunzio (b1954) convey a kind of elemental strength and adaptability in the face of imminent collapse – the work’s title present here, Sisma (Earthquake), evoking the fragile equilibrium we all inhabit.

While the white cube sets up a charismatic spatial dialogue between diverse works, in some cases the particularities of an artist are lost, as in the case of Filippo Manzini, who usually incorporates his sculptural assemblages into mundane public spaces, the anonymous nooks and crannies of underpasses and urban walls.

Among a preponderance of non-figuration, Giuseppe Maraniello’s Anfesibena stands out for its witty miniature vignette of a human-animal hybrid tensely perched at the very edge of a reedy bar projecting from a roughly cast bronze shaft, a picture of hard-won existential equilibrium.