Tomorrow: Elmgreen & Dragset at the V&A

Tomorrow: Elmgreen & Dragset at the V&A

Come in. Make yourself at home. Contemporary artists Michael Elmgreen and Ingar Dragset have transformed a series of galleries at the Victoria and Albert Museum into a film set, the fictional apartment of 74-year-old “failed” architect Norman Swann, and you are welcome to pore over his most intimate possessions, play his piano and sit – as he would sit – reading his newspapers on his sofa.

It is a home filled with things but not people: the stuff of life, or stuff that suggests life. At the door, scripts are provided to read as you pass through the rooms and peruse the objects, and it is down to you to animate these scenes, unpicking visual riddles by connecting words to props and settings.

At the outset, the viewer is implicitly cast in the role of Swann’s former student, Daniel Wilder, who, in the wake of his professional success and Swann’s bankruptcy, has bailed out Swann and taken possession of his beautiful South Kensington flat. Turning up drunk in the middle of the night with a young waitress named Wendy on his arm, Wilder enters unannounced into what he now considers to be his own home, and this intrusion offers the narrative hinge on which the entire installation rests. The mutual resentment between Swann and Wilder – Swann’s overbearing nature and psychological manipulation of the younger Wilder, and the false charm and callous ambition of Wilder as he attempts to undermine Swann at every turn – finds its physical manifestation in the interruption of Swann’s hermit-like existence by these uninvited guests.

It is a brilliant installation that carefully examines a series of fascinating themes: teacher-student rivalries, old versus new money, the nature or nurture of talent and, most significantly and successfully, the place for theory and knowledge in a world ruled by “things” and their functional and aesthetic qualities. It is perhaps appropriate, then, that the visual effect of this “film set” is far greater than the literary merit of its accompanying script. Each object in the show stands out as the result of a choice – Swann’s, or that of the artists – and, as a result, each is imbued with a significance beyond that which is held by the average piece of household paraphernalia. At its most fundamental conceptual level, then, the show indicates our day-to-day ignorance of the objects on which we rely to decorate and operate this world.

Yet the inclusion of many objects from the V&A collection, such as a silver teapot in the kitchen that almost certainly appeared in the museum’s 2011-12 exhibition Postmodernism: Style and Subversion 1970-1990, turns installation into a mirror that reveals our fetishisation of everyday things within the museum context. Perhaps it is the case that we are able to comprehend the intersection of form and function in such artefacts only when they are taken out of their natural, domestic habitats and placed in supposedly “neutral” spaces. It is with irony, therefore, that Tomorrow returns them to a domestic landscape, but one set within a museum’s interior. At the same time, the installation pushes this act of fetishising “things” further via the intimacy of the setting – our privileged entry to Swann’s study, lounge and bedroom – and the stage directions and camera close-ups laid out in the script.

In Swann’s apartment, we are both guest and intruder: internal voyeurs on the inside looking in. It is unfortunate that the lengthy script, which must be consumed in its entirety to understand much of what has gone on in the assemblage of this installation, detracts from the visual adventure, casting the eye down rather than around. Reading the script before or after seeing the show is really the only option, aside from acting it out on the spot; an audio-guide might be more practical, though it would have the effect of sketching out the three characters too concretely, of marking their presences too keenly, leaving little room for the imagination.

If the show suffers at all, it is in this conflict of media and senses. By contrast, the eerie atmosphere of abandonment and cinematic otherworldliness that inhabits the installations of British artist Mike Nelson, for instance, is founded on the viewer’s ability to explore the space with little explanation or hand-holding. The vague echo of now-passed events and conversations is what remains: Nelson’s are sites of reflection, rather than arenas for potential action. Tomorrow asks the viewer to work hard to reconstruct the artists’ vision of the space’s living qualities, but this building and shaping is ultimately carried out with blunt tools – inanimate objects and the words of a 100-page, 13-scened film. Too many ends are left open; too many stars need to align.

It is instructive, therefore, to return to the objects themselves for guidance. Models of architectural projects and unfinished designs fill the architect’s studio, some displayed and some hidden, alongside a large, ancient computer with a tiny screen – an amusing symbol of a refusal to embrace progress, and one that causes the viewers to partake unintentionally in Daniel’s ridiculing of Swann. A grand piano with a closed lid littered with family photographs conjures a sentimental image of bygone times when the flesh-and-blood owners of those faces once assembled around the instrument. An extremely true-to-life statue of a young boy crouches in the fireplace, his body language echoing the severity of his expression in the large-scale portrait of himself hanging above the mantelpiece. He looks towards two discoloured patches on the adjacent wall where a pair of pictures, possibly of his parents, once hung, and his posture betrays the specific combination of nostalgia and fear that is aroused by memories of a traumatic childhood.

Swann and Wilder’s seemingly ceaseless war of personalities is summed up in this triumvirate of sculpture, portrait and two blank stretches of wall: it reiterates their parallel need in their respective youths to rise from their origins and make something of themselves, and their mutual dependency on one another in order to do so. The old and the new orders, and their conflicting methods for gaining success (the traditionally hard-working Swann versus the socialite Wilder), are the thread running through the script and each of the apartment’s rooms. “Gosh, I hate old stuff!” exclaims Wilder at one juncture. “Old people. Old homes. All these old things. They either make you depressed or they remind you of former times being more fun or glam … History haunts us all.’1

Rather wonderfully, and in a surprising reversal of roles, in the end, our groping around for objects in search of safety and comprehension allies us more with Swann than with Wilder. At a particularly tense moment in the script that follows Swann’s smashing of the piano lid down on to Wilder’s hands, Swann sits wringing his own hands and repeating a cyclical poem for comfort: “The blue ones and the red ones, the small yellow ones, and don't forget the white ones, in all their funny shapes. The white ones and the red ones, and the blue and white and black ones …”2 This drama ends without conclusion, and we have been Swann, Wilder or Wendy at intervals along the way. But without the animation of the script beyond that which can be re-enacted in our minds, we are left only with dead things and empty spaces, and the ambiguous drip-drip-drip of the shower into which Swann retreats at close of play. 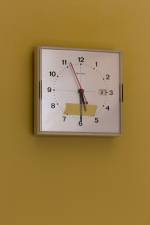