The design for the extension to the National Gallery, London, when finally won in competition by Robert Venturi and Denise Scott-Brown (1984), was a subtle deconstruction of the grandiose classical façade of its parent. So subtle indeed that, as it wound down round the corner, it seemed indeed to parody the pastiche classical front of many a British post office. This exhibition is timely, at a moment when it is not so much modernism, which would be suborned, but Postmodernism itself. “Po-Mo’s” advocates as regards architecture would maintain that as an historical evolution of cultural change in 20th century visual arts design and culture it is the practitioners who must continue to hold the initiative in cultural terms. In fact it was (as Peter Saville is quoted saying in the CD/DVD on sale in the V&A Enterprises), the actual music system that was the primary delivery system, for Postmodern ideas.

Our contributor Celia White provides an overall review of Postmodernism: Style and Subversion (From Neon to New Order), while here is actually a specific appraisal of the important positioning of architecture as part of “Postmodernism” as set out in the show. In architecture it was similarly to music, the publishing system that spread ideas defining, even re-branding the actual output of architectural practices. Not the whole publishing system, but a vocal wing of it. For historical comparison, the Renaissance was different at the beginning and end; books and discourse were the only medium from Alberti to Palladio, (when theories were based upon pre-existing classical built examples), over the 250 years or so within which the currency prevailed. Postmodernism, by contrast in its 20-year span, as defined here, was simply an eddy in the rapids of modernity. As Heraclitus might say, it persists.

Postmodern Architecture was cooked up at the presses, as a “revolutionary” and compelling idea with which to challenge a presumably tired orthodoxy. One such publishing example was that controlled and expanded by Dr Andreas Papadakis. His Academy Editions grew out of the flagging Architectural Design magazine as then recently acquired after 1975. Postmodernism soon took off as a brand of legitimate protest, whereby supposedly radical publication appropriated architects and their works on the basis of dissident criteria. Shock was one element, irony another. By this means a soluble palliative legitimised superficiality, freeing many architects as with a “placebo” from half a century of utopianism.

Students were enthralled and the constituency spread through schools across Europe. Fortunately for those still to become converted, the journal Architectural Review, longstanding arbiter of modern architecture itself, under the longstanding editorship of Peter Davey, entered the fray (August 1986) with a powerful rejoinder; a Special Issue edited by Elizabeth Farrelly,1 an emergent critic of the new generation. Her editorial first line announced “Postmodernism is dead. Some have known from the start that it was no more than a painted corpse”. Architectural Review proclaimed the event as “A New Spirit in Architecture”.2 The V&A exhibition emerges as a timely re- engagement with the problem of definition of the subject of Postmodernism.

It is clear that today there still remain some constraints on the use of the term, “modernity”, assuredly not to be replaced by the misleadingly prefixed “Postmodernism”. Baudrillard claimed that Modernity itself offered change and crisis as values yet as a result sets up its own downfall3: “Thinking through the transitory concept of modernity can lead to the proclamation of the end of modernity thus precipitating the advent of postmodernism.” This can be seen to be a recurrent phenomenon. Charles Jencks’ masterly new flow chart (Cat pp.276-277) seems to recognise this cumulative, reiterative process. But still the end of modernity is proclaimed, as foretold by Baudrillard, of course. Jencks opens the flow chart captioned “A Sea of Many Streams”. This ingenious diagram repays close study, but not perhaps leading always to conclusions with which he would agree. Davey maintained a balanced spectrum in Architectural Review from the 1980s, where such innovative, divergent architects as for example Hans Hollein, and Daniel Libeskind received key coverage, included as leaders in a range of modernity, James Stirling and Michael Wilford similarly. The latter rejected the “postmodernist” appropriation readily bestowed by the “Po-Mo” camp. Today all swim as precursors in the flow. It is equally arguable that Postmodernism requires neither a 21st-birthday celebration nor an epitaph, but maybe both: simultaneously a tragic accidental demise and then a rebirth. But critique has moved on. Modernity cannot be prefixed as such. It is this continuum that today is widely recognised as recovered.

Joseph Rykwert provided at that time an early and astute appraisal4 in: “Ornament is No Crime” published in Studio International (September 1975). He first unearthed a little-publicised scheme by Venturi and Rauch (1967) the Bill-Ding-Board for the National Hall of Fame Competition to be near the Rutgers Stadium, New Jersey. The architects wished to emphasise the unity of this mega-build with all that surrounded it. But it was, as Rykwert observed, to contradict their own antipathy to the decorative. Rykwert goes on to raise the categorical point, that with an artist such as Claes Oldenburg, both Venturi and Hollein share a common quality of irony. Oldenburg was concerned with “a reversal of expectation in his reshaping of the tangible”. And, as Rykwert emphasises, both Hollein and Venturi exhibit that same quality of “touchability”. Rykwert was prescient in proposing that the way forward for architects is just such, but only with the help of the painters and sculptors, who themselves have to have learnt the importance of touchability.

However, the essential unity of the visual arts with architecture, as Rykwert had feared would be slow in coming, has barely materialised by 2011. The “problem of meaning” to which then he drew attention is widely prevalent. And this is not aided by the efforts to revive “Po-Mo” as a going category. In Painting, touchability is a powerful element today. The recent exhibition The Painting of Modern Life (Hayward Gallery 2007) showed ample evidence this.5 Here the works of Peter Doig, Marlene Dumas, Luc Tuymans, Martin Kippenberger in conjunction with Gerhard Richter, David Hockney, Michelangelo Pistoletto, Richard Hamilton and Malcolm Morley revealed this tendency towards a significant diversity. What emerged was the importance of photography as a referencing for even compositional systems.

In Land Art, sculpture has developed a new territory, once prospected by Robert Smithson. By this century, Richard Long, Ian Hamilton Finlay, also Andy Goldsworthy had established new forms of recognising the essence of human perception in the landscape and in its materiality. Here too, modernity offers and accommodates within its theoretical field further space where architecture, sculpture and landscape correlate together.

Such developments are beyond the scope of this exhibition, and outwith the time frame. But it is perhaps relevant and certainly noteworthy that Charles Jencks, a leading advocate for and definer of postmodernist architecture, has himself become somewhat independent of Postmodernism in its literal sense as he extends his talent into the field of garden and landscape design. As a practitioner in this freshly adopted field he has broken the mould ingeniously. Here is a well argued consultative but theoretical standpoint, seemingly light years away from the semantic troughs of the 1970–1990 period. This is one aspect of the new modernity, integrating traditional semblances of the sublime and picturesque, introducing episodes and events en route, open to new collaborations with artists, that are neither Stylistic nor Subversive.

Within the V&A exhibition photography is well positioned; the particular importance of the camera cannot be understated as a tool of memory and of perception. Whether in product design or in fashion design the digital camera extends the power of instant imagery in ways not anticipated in the 1970s and 1980s. It is left to Claire Zimmerman to explore (well presented in the catalogue) the contrast between the bland perspectives of the Smithsons’ Hunstanton School (1949-54) and the Leicester University Engineering Laboratory by Stirling and Gowan: the conscious posing of the unconventionally designed, wholly contemporary Ford Anglia (with backward slanting rear window) removes all pretence of spontaneity. The muted reflectivity of the whole reminds of half a century of expressionist precedent. Rightly did Venturi say, not “Less is More” qua Mies Van der Rohe but “Less is a bore”.

This has been an exhilarating, even inspiring exhibition. The idea of including Fashion and Music within the frame has paid dividends, and allows a better understanding of the particular mood of the time which embraced humour, pathos, beat, un-sittable-on chairs, razzmatazz: a pity that architects could not themselves always see the wood for the trees. Did Philip Johnson with his AT&T Building (NYC) give us the last laugh? Maybe we will never know now. But it surely would have been good to know, back in those happy pre-9/11 days. 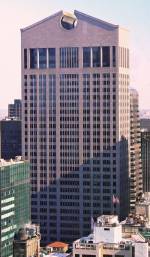