Art & Today is the fruit of the decade spent by the author as contributing editor to Art in America and Artpress. Her previous works include Postmodernism (Movements in Modern Art) (Cambridge University Press, 2001) and Critical Condition: American Culture at the Cross Roads (Cambridge University Press, 1997), as well as Postmodern Heretics: The Catholic Imagination in Contemporary Art (Midmarch Arts Press, 2004) and Defending Complexity: Art, Politics and the New World Order (Hard Press, 2006).

The trajectory of Eleanor Heartney's writing does nothing to suggest that this monumental work was formulating in the background. In the past decade, there have been few works to compete with this rigorous project, which Heartney set herself. Art Since 1900 is, however, a necessary precedent, composed as it was (for Thames & Hudson) by Hal Foster, Yve-Alain Bois, Rosalind Krauss and Benjamin HD Buchloh. This work offers a masterly compendium, which, with a plethora of information, largely answers all possible questions about the respective developments of modernism, antimodernism and postmodernism. Such grounding, or indeed earthing, constitutes a necessary preliminary as well as a continuing reference source for the bold extrapolations developed by Heartney into the realm of contemporary art.

Jean-Francois Lyotard is, in terms of his 1979 treatise The Postmodern Condition, quoted as asserting that '… in the postmodern era, comprehensive theories of history, social systems, or science are no longer tenable' and emphasises that accordingly '… we must abandon universal principles in favour of micro-narratives'. This principle, in effect, becomes the leitmotif for Heartney's organising structure, whereby the book divides into sixteen sections prefixed by the word 'Art', these are: Art & Popular Culture, Art & the Quotidian Object, Art & Abstraction, Art & Representation, Art & Narrative, Art & Time, Art & Nature and Technology, Art & Deformation, Art & the Body, Art & Identity, Art & Spirituality, Art & Globalism, Art & Architecture, Art & its Institutions, Art & Politics and Art & Audience. This list gives some idea of the thrust of the book - to investigate predominantly, but not exclusively, key preoccupations where they have influenced creative thinking.

Without undertaking a detailed analysis of the chapters, it is useful to pick out one or two. Art & Architecture, subtitled 'The Utopian Fallacy', displays certain common misconceptions in the art world. One is to assume that the 'utopian impulse in architecture' has failed, so 'freeing the architect from the role of social visionary'. That is something of an over-generalisation. Professional institutions in the architectural world, which control education, still impose a level of social commitment as opposed to purely consumerist indulgences. However, Heartney redeems herself on this point by starting the section with reference to the outstanding American radical in this realm, Gordon Matta-Clark. The quality of transparency, which much preoccupied architectural theorists in the 1970s, is then skated over, with no attempt to express the idea of 'phenomenological transparency' (as developed by Colin Rowe and Robert Slutzky in 1971). This could be equally subversive to that utopian vision, which Rowe was subsequently to call into question over the next generation from Cornell. Indeed, many of the art-architectural works exemplified here by Heartney unwittingly underpin those ideas.

Choosing, at random, another chapter - Art & Spirituality, subtitled 'Rediscovering Transcendence' - perhaps, as it happens to be closer to Heartney's own preoccupations, it is by contrast impressive how the author amplifies her thesis with works from Chris Ofili, Alma Lopez, Mark Wallinger and Ron Kitaj. However, in the latter case, although referred to in the text, it would surely have been more appropriate to use Kitaj's masterwork, 'If Not, Not' (1975-76) with its references both to the Vietnam War and the Holocaust, which have a more universal relevance perhaps than the work selected, 'The Jewish Rider' (1984-85). Anish Kapur's, Cloudgate, likewise seems ill placed in this section, and the absence of Joseph Beuys - a most spiritual, shamanist of artists - seems inexplicable. However, the author takes pains to emphasise the inclusiveness of the work, and its various chapters.

The book is more comprehensive, notwithstanding such criticisms, than it has itself claimed. It is not, in fact, fully acknowledged either in the main introduction or in the chapter lead-ins how 'demountable the sixteen sections can be, in a truly postmodernist meta-narrative'. It is actually possible here to reverse the entire sequence of events. It might have been better to start the book with 'Art & Audience'. Indeed, 'Art & Politics' could have been readily integrated in one of three or four other chapters, such as 'Art & Today'.

The book is an invaluable and essential item for students and academics. The game of substitution can be played over the selection of works throughout, which is part of the value of this widely inclusive taxonomy. Combine this volume with Art Since 1900 (reviewed here in 2007) and one can see how two major art publishers, each of great repute, have clearly and conclusively resolved for their market the question of familiarisation with 20th- and 21st-century art. Having said that, both works, are essential compendia for curators, museum directors and private collectors. Never have the scholar and the consumer each been so well served as now. The two books are mutually inclusive. 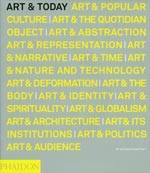