As mercurial as this master of the Polish avant-garde might seem, a career-wide survey revealed some persistent concerns while retaining much of the mystery 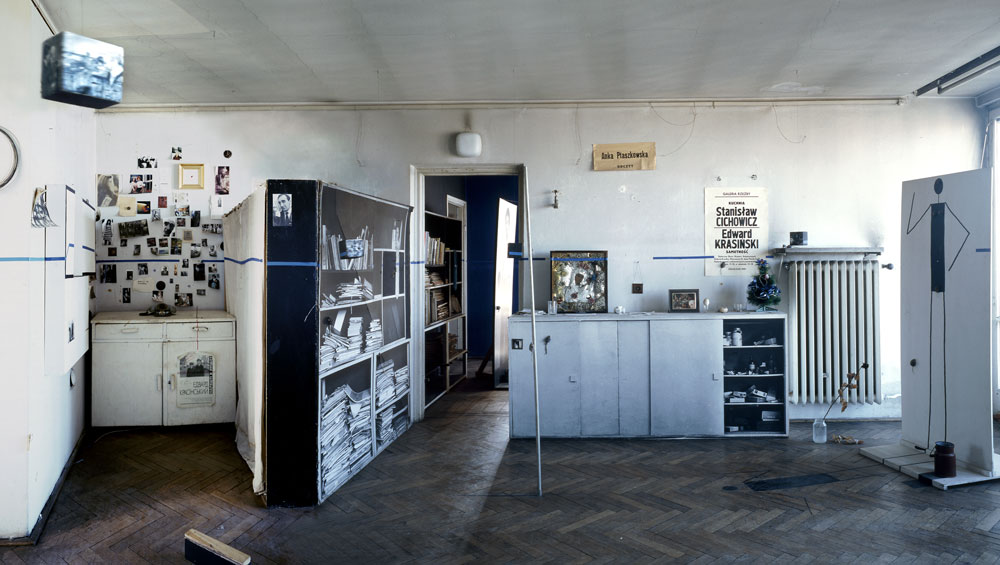 “I have a roll of blue tape in my hand,” said Edward Krasiński (1925-2004) in 2001, “so I stick it on. Wolves pee to mark their territory: I stick the blue tape to mark mine.” Krasiński certainly marked a lot of territory. In 1968, already established as a significant figure in the Polish avant-garde, he took a roll of blue sticky tape and wrapped it around a pigsty, a few trees and his daughter’s stomach. From this point on, blue tape became his calling card, covering every space he exhibited in, as well as his own studio. Though there are numerous shifts in Krasiński’s career, it is fair to divide it into pre- and post-tape.

Krasiński was the subject of a recent retrospective at Tate Liverpool, which ran concurrently with the museum’s superb survey of Yves Klein. The prominence of the colour blue was not the only parallel. Both stood on the edges of conceptualism and minimalism without fully belonging to either. Each brought a pioneering sense of theatre and performance to their respective milieux: Klein conducted a monotone symphony and threw gold leaf into the Seine; Krasiński stood on a ladder in the sea and conducted the waves themselves. As his fixation on sticky tape demonstrates, Krasiński also shared Klein’s tendency towards monomania, creating abundant versions of the same thing. But whereas Klein’s kineticism is manifested in the frozen moment – witness the bodies of his Anthropometries, enraptured at a moment of bliss – Krasiński tape surges ever forward in a dart of locomotion.

Movement was pivotal to Krasiński’s work from the beginning, which came relatively late in life. Born in Łuck (now Lutsk in the Ukraine) into a noble family, he originally studied design at the Krakow Kunstgewerbeschule, an experience that probably influenced his later concern with interior spaces. He then read painting in the same city but, instead of immediately embarking on a serious artistic career, he drew magazine images, many of them erotic. It was only with his move to Warsaw in 1954, on the edge of 30, that Krasiński’s career began to take shape, and even then it took until 1960 for him to produce the work for which he is renowned.

The first three sections of the Tate’s exhibition were devoted to Krasiński pre-tape, and showed him as a recycler of found materials. One of the earliest pieces, an Untitled sculpture from 1962, takes the form of a wooden box. Rather than clustered with ephemera like an assemblage by Kurt Schwitters or Joseph Cornell, Krasiński’s object is sparse, with a grey-painted background. A series of black wires run horizontally across at incrementally increasing gaps, while a single white line vertically divides the composition into two unequal halves. Popping out of this border, again on wire, is a single ping-pong ball painted so as to resemble an eye or a pitted olive. There is something of Alexander Calder in this desire to use movement to defy fixity, though in Krasiński’s case the movement is an illusion and a threat.

These ideas are best encapsulated in the Spear sculptures, of which two examples, from 1964 and 1965, hung in the Tate. Composed of slender wooden poles tapered to a point and tailed by smaller, brightly painted fragments, they feel like paused videos. Simply activate one, and it will hurtle to its destination. Contemporary photographs showed Krasiński installing a Spear outside, placing it parallel to the flat earth to enhance its implicit dynamism.

Krasiński soon began to apply these ideas to entire exhibitions. In 1966, Krasiński was among the founders of Galeria Foksal, one of Warsaw’s leading contemporary art spaces, and for his exhibition there two years later he transformed the space into a maze of plinths mounted with wire and rubber sculptures. One pedestal was placed at the door to narrow the entrance. The wires moved from plinth to plinth, forming parts of artworks before flowing on to the next. This was art trapped in its own development, a swarm of lines and bends.

While the blue tape had made its debut privately in 1968, it was not until 1970 that it become the defining feature of his public practice. That year, Krasiński was invited to exhibit at the Tokyo Biennial. When his sculptures failed to arrive on time, he sent a telex containing the word “Blue” 5,000 times and ordered the 80-metre-long printout to be placed in the exhibition space. “After that,” said Krasiński later, “there was no turning back.”

Blue tape became the defining feature of each of Krasiński’s exhibitions, placed at the same level around the wall. It would bend and curve with interior features and bisect prints of Krasiński’s photography. Imitation domestic spaces would be installed for it to cross. A series of canvases named Interventions, of which the Tate had on loan an extremely impressive showing, were directly activated by the tape. Some contained geometric or architectural forms that the tape danced around as if they were real; others were positioned as if knocked askew, allowing the tape to momentarily pivot off its course. Over the next few decades, Krasiński would add more and more elements to his taped world, such as images hung from the ceiling and labyrinths of mirrors that caused the blue line to reverberate into the fictitious worlds of reflection.

By recreating some of these spaces, the Tate retrospective managed the rare feat of transporting viewers back to Krasiński’s shows, which in turn instil a sense of being trapped in the artist’s mind – a mind so focused that his own studio and home, now an arts centre, resembles one of his exhibitions. For all the interest of his individual work, Krasiński’s most profound contribution to the history of art is likely his insistence that exhibitions be complete spatial experiences, in which each item forms part of a holistic entirety.

The exact meaning of the tape remains somewhat elusive. In a 1977 exhibition catalogue, Krasiński declared of the tape: “IT intervenes IN and unmasks EVERYTHING. IT exists. I trust IT”: a far grander claim than his 2001 notion of marking territory, but one that also shows an exaggerated self-consciousness. The idea that this zipping, dynamic line could somehow “unmask” reality, make it more apparent through connection and disruption, does not seem so far away from his earlier appropriation of mundane objects into abstract sculptures. That the Tate’s ample retrospective did not fully unmask Krasiński himself, that some enigmas endure, is testament to the artist’s continuing allure. 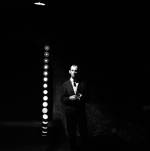 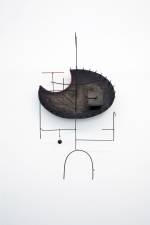 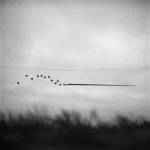 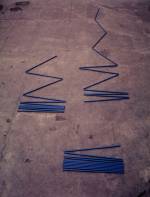 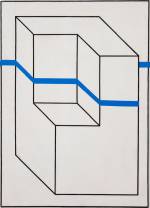