This strikingly beautiful exhibition of stage and costume designs from early 20th-century Ukrainian art is unique in several ways. First, it is unusual in its dedication to the specifically Ukrainian avant garde, which has generally been considered part of the Russian avant garde, because many of its leading representatives – such as Alexandra Exter or David Burliuk, for example – have been active participants in artistic life in Russia. Second, it is remarkable in its focus on theatre as the means to create the sense of identity in a nation struggling to separate itself from its powerful neighbour. Les Kurbas (1887-1937), a revolutionary director who was the main locus of energy and creativity in Ukrainian avant garde at the turn of the 20th century, is featured in a separate section of the exhibition devoted to the Berezil Artistic Association, a theatre he directed in Kiev from 1922 to 1926, later relocating it to Kharkiv. Third, it is situated in a place that is an undiscovered gem in its own right. The Ukrainian Museum is a small, but exquisite repository of the treasures of this nation’s visual culture, most of which focuses on folk art. The museum is located in the heart of New York’s East Village, which, historically, has been populated by immigrants from eastern Europe, but is now a student neighbourhood, tucked behind the Cooper Union School of Art and Design and New York University dorms.

The show displays 125 works by 13 artists from the collection of the Museum of Theatre, Music and Cinema Arts of Ukraine in Kiev. For a viewer familiar with the works of the Russian avant garde, and European modernism in general, this exhibition is revealing of the extent to which the Ukrainians have been a part of the general modernist trend that engaged Europe at the turn of the last century. Travelling to France and Italy, exhibiting there, studying in Paris, showing works in Ukraine and Russia, and working with experimental theatre directors, Ukrainian artists became citizens of the world, aware of international trends, but also strongly attached to their roots and native language. The exhibition forcefully articulates this double-pronged character of the artists’ activity that made them look beyond Ukraine’s borders, but was ultimately oriented toward the development of a national style. The display begins and ends with wall texts that define and structure this problem of national identification. Correspondingly, there are two entrances into the space, and it is laid out in such a way that either one can be used.

Depending on where you enter, you are greeted by the works of either Vadym Meller or Anatol Petrytsky, two artists who dominate the display. Meller is perhaps the star of the show, with his colourful and dynamic costume designs for figures that appear to be moving even in static poses, because a busy play of geometric multicoloured forms makes their outlines overlap, blur and shimmer. Meller, who was born in 1884 of a Swedish father – a top official in the tsarist administration – and a mother of Italian and Greek descent, studied in Kiev, Munich and Paris, and lived in Moscow and Odessa before eventually settling in Kiev in 1919. There, he worked in Exter’s studio for a while, and, on a more permanent basis, designed costumes for Bronislava Nijinska’s dance company and worked for several years as a set and costume designer for various theatres, including Berezil. Throughout the years, Meller also taught in the Kiev Art Institute, raising a generation of young artists and stage designers, as he gradually became the central presence in the artistic life of Ukraine. In 1925, he won a gold medal at the International Exposition of Industrial and Decorative Arts in Paris, leaving silver to Aleksandr Rodchenko for his design for a Workers’ club. Particularly striking are Meller’s early cubo-futurist designs, made before he joined Berezil in 1923 and before he began working on productions inspired by stark and efficient forms of the constructivist aesthetic. Cubo-futurism, which emphasises movement and colourful arrangement of forms, was a style developed from the combination of cubist and futurist influences and practised by Meller’s teacher, Exter.

Despite having frequented Exter’s studio in 1918-19, Petrytsky  (1895-1964), who also features prominently in this exhibition, made works based on more traditional, realistic representational models. Unlike Meller, he did not study abroad, but trained exclusively in Kiev. Petrytsky began working with Kurbas before Meller did, in the Young Theatre in Kyiv in 1917-19, and in the Taras Shevchenko State Theatre, which replaced it. While colourful and inventive, Petrytsky’s works do not display the abstracting influence of either cubism or futurism, but rather the simplifying forms and bright palette of post-impressionism. In the catalogue for the exhibition, his style is described as “expressionist,” having been formed under the influence of symbolism and Paul Cézanne.1 Indeed, the influence of expressionism can be traced in the large panel paintings made as backdrops for various productions, such as House of Interludes (1917) for a theatre directed by Bonch-Tomashevsky, or in the Cry of the Captives (1920) made for Kozelets Theatre. In these two works, signature features of Petrytsky’s style are readily apparent: simplification of forms, contrasting colours, emphasis on a meaning producing action or gesture. The exhibition displays a wide range of Petrytsky’s work for theatre, from his early expressionist-inspired productions to the later geometric work made under the influence of constructivism and the designs of the late 1930s that reflect the artist’s love of Ukraine’s folk culture.

Apart from Meller and Petrystky, the exhibition features works by Exter, Marko Epshtein, Borys Kosarev, Oleksandr Khvostenko-Khvostov and other Ukrainians who designed theatre productions in Kiev, Kharkiv and Moscow. Like those of Meller and Petrystky, these artists’ creations are reflected through the prism of the issues of national identification versus globalism, as well as the use of such stylistic devices as the vernacular, the grotesque, the decorative, the modern and the influence of movement and dance on theatrical action. Throughout the exhibition, the importance of theatrical action as the principal formative element in the building of national identity is brought to the fore. Like many talented and successful artists in the Stalinist union of nations, Kurbas eventually perished in the Gulag. Nevertheless, in Berezil, he managed to create a company that became a leading force in theatrical experimentation. Virtually every contributor to the exhibition’s comprehensive catalogue mentioned this theatre in one context or other, clarifying its role as the central institution responsible for the creation of the Ukrainian avant garde. This exhibition takes up the legacy of Kurbas and the artists of the period in a formidable effort to canonise the project of Ukraine’s modernisation.

Reference
1. From the Easel to the Stage Set: The Avant-Garde Painter and the Theater by Myroslava M Mudrak. In: Staging the Ukrainian Avant-Garde of the 1910s and 1920s, published by The Ukrainian Museum, New York, 2015, pages 16-43; especially 32-36. 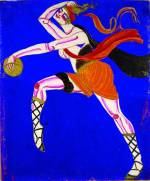 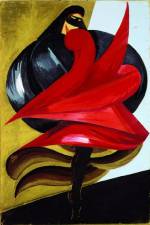 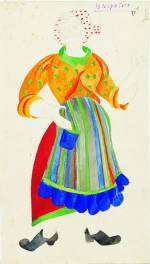 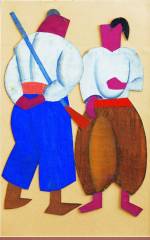 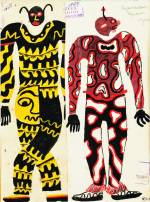 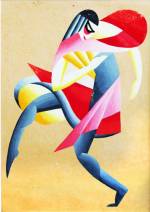 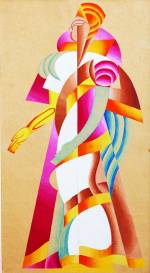 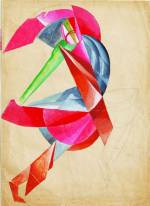 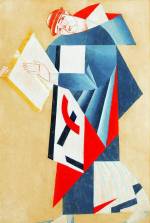 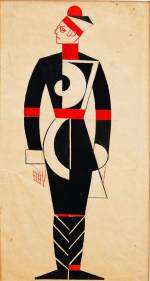 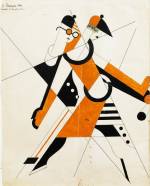 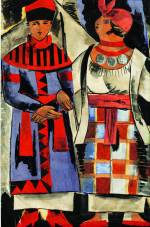 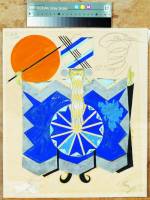