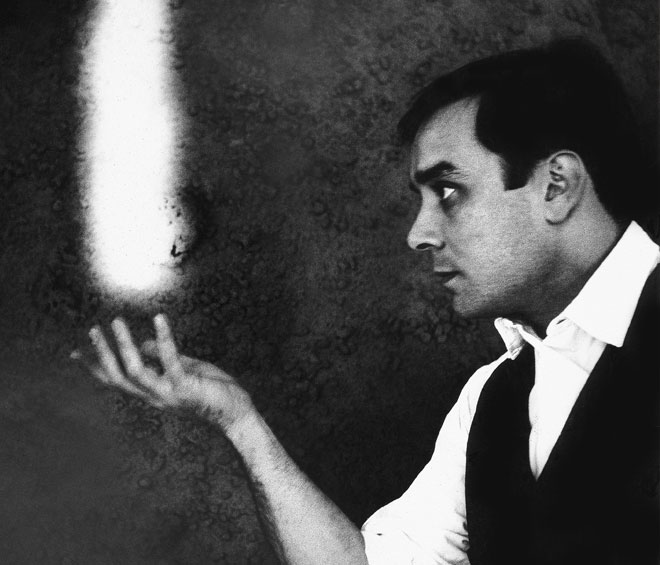 There is no artist so associated with a single colour as is Yves Klein (1928-62). And there is no colour quite like International Klein Blue (IKB), the awe-inspiring deep ultramarine present in much of his work. But Klein’s art was far from monotone. Between 1956 and his premature death from a heart attack, he innovated at a pace not glimpsed since the heady days of prewar modernism. He composed proto-Cageian symphonies and staged impossible photographic scenes, placed flesh and fire on the canvas and turned ritualistic acts into artworks – compare this with his great American contemporary Robert Rauschenberg, who spent the same period working solely on the Combines. Klein anticipated both minimalism and conceptual art, but did so with a sense of wonder and alchemy that was wanting in many of their later practitioners.

Klein is presently the subject of a retrospective at the Tate Liverpool. It is the UK’s first museum survey in two decades, though there have been several displays in commercial galleries, most recently last year’s double-bill with Giacometti at the Gagosian Grosvenor Hill. Although compressed into a relatively small suite of rooms, the Tate retrospective manages to cover much of Klein’s painted output, with pieces drawn from an astounding variety of public and private collections.

It should come as no surprise to learn that Klein was a child of the Côte d’Azur, a stretch of sea and skies so cerulean as to feel on the edge of some better world. Born in pastel-hued Nice, he split his childhood between Paris and his aunt’s residence in Cagnes-sur-Mer, where his family decamped for most of the second world war. His parents were both painters. While his Dutch father, Fred, practised a defanged post-impressionism, all sun-saturated beaches and luminous flowers, his mother Marie Raymond was at the forefront of Tachisme, a softer French analogue to abstract expressionism. For Yves, there was to be no rebellion against his parents’ profession.

In 1947, Klein took up a pastime that had an enormous, unforeseen impact on his adult artistic practice. He joined a judo club, run during the summers at Nice’s local police headquarters. The Japanese martial art’s focus on the balance of dynamism with passivity reverberates throughout his work. It remained a lifelong pursuit: Klein would later travel to Tokyo and train at the Kodokan Institute, and teach judo in Madrid and Paris. It was at the Nice club, however, that Klein befriended fellow artists Armand Fernandez (known as Arman) and Claude Pascal. Klein and Pascal particularly bonded over their interest in the occult, and both joined a Rosicrucian fellowship.

On one balmy day in that summer of 1947, the friends imitated the division of domains by the Olympian gods after the fall of the Titans. Arman took the Earth, Pascal took words, and Klein famously signed his name in the sky, signalling a career devoted to the great blue beyond. What might have been a throwaway movement of youthful self-importance has since become one of the foundational legends of contemporary art.

But the infinite would have to wait. Klein served the mandatory two years of military service in Germany, before moving to London in 1949. Here, he worked for his father’s friend Robert Savage, a framer on the Old Brompton Road. Klein’s career in art thus began binding paintings rather than letting them flow free. It was in London that he held his first exhibition, a series of monochrome paintings displayed in his flat. Then, astonishingly for an artist whose mature output was distinguished by consistent innovation, Klein continued in the same vein for the next eight years.

It is with the Propositions Monochromes, exhibited in early 1956 at Paris’s Galerie Colette Allendy, that this early work reached fruition, and it is at this point that the Tate Liverpool’s exhibition begins. Klein’s assorted small monochromes have a washed-out quality, instilling calm. They reject the action behind Tachisme, while taking its softness even further. The red-blooded paint-slingers of abstract expression are met with a smile and a shrug, the war-shattered old world but mildly diverted by the freshly ascended new.

A little less than a year later, Milan’s Apollinaire Gallery saw the public debut of IKB. Not a new colour, but rather the preservation of pigment in polymer, IKB allowed Klein to create paintings largely immune to the fading of colour over time. The eight canvases gathered at the Tate, spanning a five-year period of practice, still manage to startle. Blue is the colour of the cosmos, of the skies and the seas, and this sense of endless space pervades each of the Untitled Blue Monochromes. Varying significantly in size and intensity, their watery depths provoke a sense of unfathomable enigma even as they prompt a contemplative calm.

If Klein had stopped at this point, he would have stood as a pioneer of minimalism. But he was impelled to move further. “My monochrome canvases,” he wrote in his 1958 essay The Monochrome Adventure, “are not my definite works … they are the remains of the creative process, the ashes.” It would be fairer to call them the kindling. There are, for instance, a series of sculptural works created using sponges, stones and wooden sticks. Largely saturated in IKB, they take the cosmic intensity of the monochromes and instil them into relatively mundane natural objects, the infinite incarnated on Earth.

Klein’s mature period saw him repudiate conventional painting techniques. He had already chosen sponges and rollers over the brush. The Anthropometries went much, much further. Looking back with more than half-a-century’s distance, it is difficult not to feel somewhat queasy about the process behind these works. Contemporary photographs of performances show a white-tied Klein conducting an orchestra while nude female models smear themselves in IKB paint and daub themselves over enormous canvases. The results, though, are incontrovertibly spectacular. Klein transfigures the human form into an expression of blissful movement. The bodies of his models transcend their terrestrial limitations and become celestial beings, abstracted coalescences of shape and shade.

The second late series, the Fire Paintings, saw Klein use Bunsen burners and flamethrowers on cardboard canvases, in some cases using models wrapped in flame-retardant material as a sort of inverse stencil. The Anthropometries saw Klein paint with flesh; here, he painted with the immaterial. The six examples on display in Liverpool show the artist at his most appealingly hermetic. They also show him at his most trailblazing. In the Fire Paintings, Klein shifts the loci of the art from the finished object to the series of occurrences that led to its creation. He thus emerges as a forefather of conceptual art.

Due to this focus on process, much of Klein’s most precedent work was transient. One 1958 exhibition saw him empty a whitewashed gallery, and present his own presence as an artwork. The next year, Klein began his Zone de Sensibilité Picturale Immatérielle series, in which he would take payment for ownership of an empty space, so that the buyer was able to feel the sensation of the “void”. The purchaser would pay in gold, but could choose to burn the receipt, prompting Klein to throw half of his golden fee into the Seine in the presence of curators and critics. This ritualistic aspect of Klein’s practice is difficult to capture in a museum. Though these ephemeral works, along with the difficulty of gathering together the scores of Anthropometries and Monochromies painted in a few short years, make it impossible to create a definite account of Yves Klein’s practice, the Tate’s exhibition is as complete as could reasonably be asked for. Step out of the murky Mersey and into Klein’s deep blue sea. 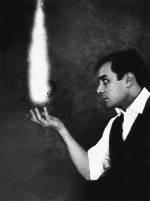 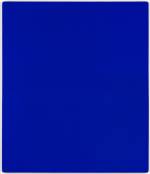 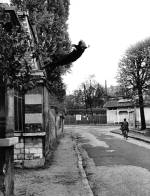 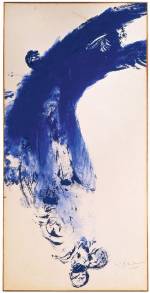 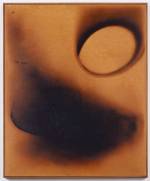 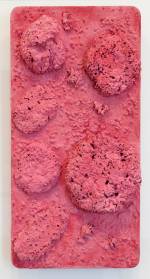 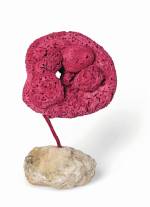