Sir Eduardo Paolozzi is considered to be one of the forerunners of British pop art. An exhibition of his vibrant and eccentric prints has opened at the Fitzwilliam Museum, Cambridge, which was an early supporter of his work

The printed collage was an integral part of the practice of Sir Eduardo Paolozzi (1924-2005). When he was growing up in Leith, Edinburgh, cutting up and layering images from magazines was one of his early amusements. He continued to develop the medium at Saint Martin’s School of Art and the Slade in London and then later moved on to work with print studios, creating screenprints and lithographs. While working with these techniques, he was also creating sculpture. His public sculptures can be found in Edinburgh and London, notably his chunky bronze ode to Sir Isaac Newton at the British Library (1995) and the dynamic mosaic at Tottenham Court Road underground station (1982), which has made national news headlines, recently because it has come under threat during modernisation of the station.

The bright, almost electrifying, colour clashes that feature in the Tottenham Court Road mosaic are evocative of the prints displayed in the exhibition. Layering-up images from magazines, he juxtaposed his interest in technology, science and history with recurring pop culture themes of celebrity, fast food and advertising. The printed collages displayed in the exhibition are taken mainly from the two series, Moonstrips Empire News (1967) and General Dynamic F.U.N. (1970), with additional works from Cloud Atomic Laboratory (1971) and Bunk (1947-52).

Bunk, a series of 45 printed collages, was exhibited at the Institute of Contemporary Arts in 1952. Even at a forward-thinking gallery, the medium of printed collage was considered unconventional and unacceptable as art because of the photographic processes involved. Paolozzi collaborated with print studios for the works, notably Editions Alecto and Kelpra Studio. That same year, Paolozzi co-founded the Independent Group, a group of artists and thinkers who began to debate the collision of high and low culture in art and society. Paolozzi’s status as a revolutionary artist of modernity was then cemented when, in 1956, he took part in the seminal Whitechapel gallery Gallery exhibition titled This is Tomorrow, which is credited with ushering in the British pop art movement.

The title Bunk is taken from a quote from Henry Ford, who once said: “History is more or less bunk.” Ford was a progressive who stood for mass production and consumerism, cultures that were dominating America and which fascinated Paolozzi. He introduced this Fordist concept to art: his collage series were printed in a standard issue of 100 and even packaged in a neat box. The box for Bunk displayed in the exhibition is made of translucent neon pink plastic, reflecting the playful attitude of the prints inside. The first print from the box of facsimile prints shows the pretty proportions of the face of Hollywood actress Lucille Ball opposite a Minnie Mouse powdering her nose, a tin of White Star tuna, a fruit plate and a glass of juice.

Paolozzi’s interest in American culture continued in the series General Dynamic F.U.N, a portfolio of 50 photolithographs and screenprints created between 1965 and 1970. The prints are a playground for Disney characters and diner-style food and drink. Children, American landmarks and Hollywood stars all congregate, celebrating the entrance of media to the modern age.

Paolozzi had become obsessed with US pop culture at an early age. His Italian parents, first-generation immigrants, owned an ice-cream shop in Albert Street, Leith, that sold confectionary, cigarettes and cinema tickets. Paolozzi enthusiastically collected cigarette cards of popular sports stars and Hollywood actors, and from the age of four he went to the local cinema, where he absorbed the glitz and drama of the screen stars. Hollywood stars pop up across General Dynamic F.U.N; rock star Ricky Nelson in a pink shirt and a classic-looking Elizabeth Taylor with purple lips and green eyes appear side by side in a print titled An Empire of Silly Statistics … A Fake War for Public Relations.

It wasn’t just the subject matter of the movies that inspired the young Paolozzi; the sharp cutting and clipping techniques from film scenes was also an influence. He started to cut out his favourite images from magazines and, while he was not able to pin them up on his bedroom walls – the only image allowed was a framed Madonna with a crucifix – the inside of his cupboard doors was the secret universe of his imagination. A few pages from one of his numerous sketchbooks are displayed in the exhibition, showing his humorous layering style juxtaposing people, objects and text.

While American pop culture was a visual obsession, Paolozzi read and researched widely on history, science and philosophy, which was why he preferred to call himself a surrealist, rather than a pop artist. The series Moonstrips Empire News, created between 1965 and 1972, shows his interest in history of art and artefact. Mickey Mouse is juxtaposed with Michelangelo’s David in The Silken World of Michelangelo (1967). A black on gold profile of David looks east to Europe, while Mickey Mouse faces west towards America, and a cartoonish group of Egyptian figures presides over them both. In a print titled Donald Duck Meets Mondrian (1967), Donald is simplified into pixelated blocks and Mondrian’s square colours pop in bright pink and yellow.

As well as art, text was an important component of Paolozzi’s work. Prints from General Dynamic F.U.N, How to spend time in Hollywood and Temporary Variations in Experienced Type consist mostly of paragraphs of small-print text from the pages of a magazine. Paolozzi also designed a cover for the literary journal Ambit, where his friend JG Ballard was prose editor. The 1967 cover displayed in the exhibition shows the collaged image of a fuzzy black gorilla clasping a woman in a wedding dress, cut out of a 1950s edition of Vogue. He continued to contribute to the journal with images tackling political subjects such as advertising, the Vietnam war and Japanese technology.

The Theory of Relativity, displayed at the entrance to the exhibition, is an example of one of Paolozzi’s electrifying geometric designs with multiple graphic strips of pink, yellow and orange. This print was purchased by the Fitzwilliam Museum in 1967 for £34 from the print studio Editions Alecto. The history of the museum’s acquisitions of Paolozzi’s work is an engaging addition to the exhibition. The following year, the museum acquired the series Moonstrips Empire News and later, in the 90s, Paolozzi donated his drawn designs for the Tottenham Court Road underground station mosaic.

At a time when Paolozzi’s public art has come under the national spotlight, this exhibition presents a bold visual taste of his legacy as a surrealist pop artist, and shows his importance to the development of British art. While his printed collages were an unconventional medium at the time of their production, they represent a personal part of his practice, ingrained since childhood and developed further by his fascination with technology.

• Watch this
BBC video interview with Eduardo Paolozzi in 2000. 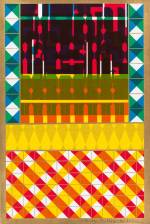 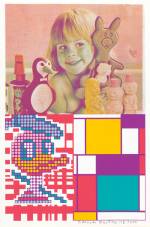 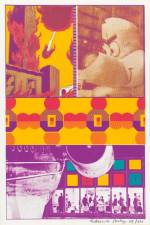 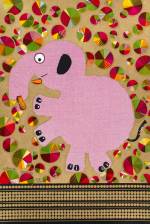 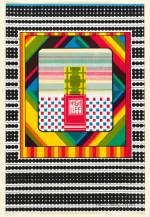 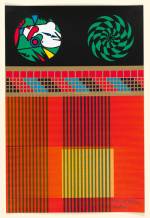 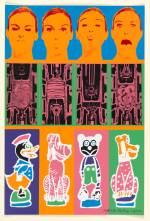 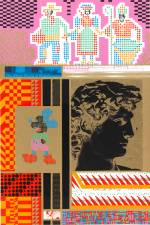