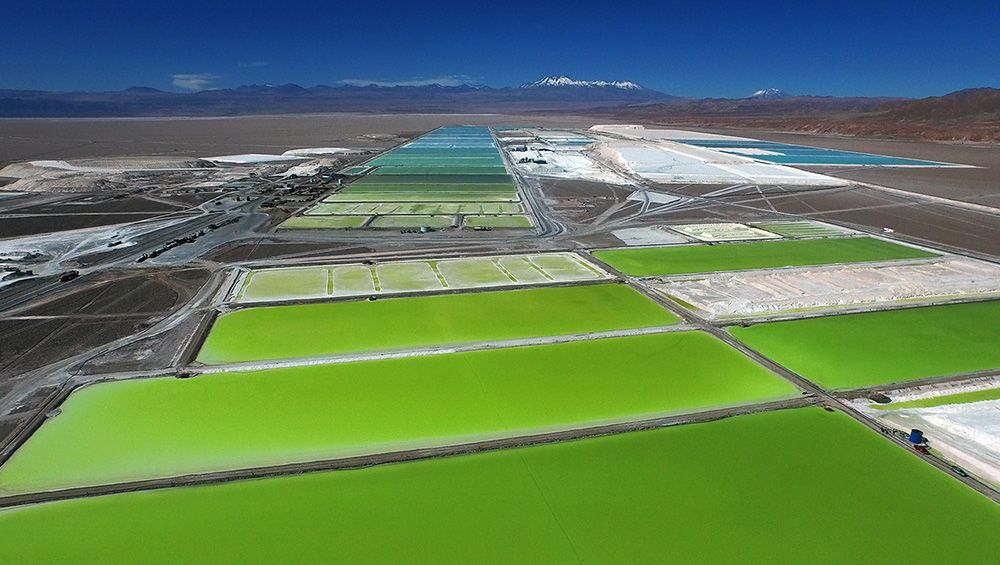 The wilful destruction of our planet and its resources is no laughing matter. So the sombre mood in the entrance to this Royal Academy show is entirely appropriate: a dark, low-lit corridor with a timeline marking the significant events and activities that have helped to bring us to this point, as well as the moments when key individuals or organisations have raised the alarm.

Baldly stated on (biodegradable) boards, with a smattering of reportage photos to illustrate, we start in 1750, with a world population of 700 million, moving rapidly into the first Industrial Revolution, kicked off by the UK in 1760, and described as a period when new sources of energy (coal and steam) were harnessed “to power new machines designed to reduce human labour and increase production”. Sounds like a good thing, right?

But it was not long before the negative impacts on nature were brought to light – in the 1840s, Scottish surgeon Sir James Ranald Martin, reported on the depletion of forests in India, which sparked the establishment of the Indian Forest Service. The timeline then rattles through the latter half of the 19th century, marking attempts by Indigenous people in North America to protect their landscapes and resources, and the establishment of the first US national parks and environmental organisations. Then we hit the second Industrial Revolution (1870-1914), powered by electricity, petrol and steel. We see the establishment of Europe’s, and then Africa’s, first national parks (1909, in Sweden, and 1925, in the Belgian Congo, respectively). We segue through a series of entirely manmade disasters; two world wars, the US Government starts testing nuclear bombs in the Pacific (1946), the Union Carbide gas leaks in Bhopal, India (1984) that resulted in 16,000 deaths, the Chernobyl nuclear disaster in 1986 (casualty figures not given), and the Exxon Valdez oil spill in 1989 with its disastrous consequences for wildlife and marine life. 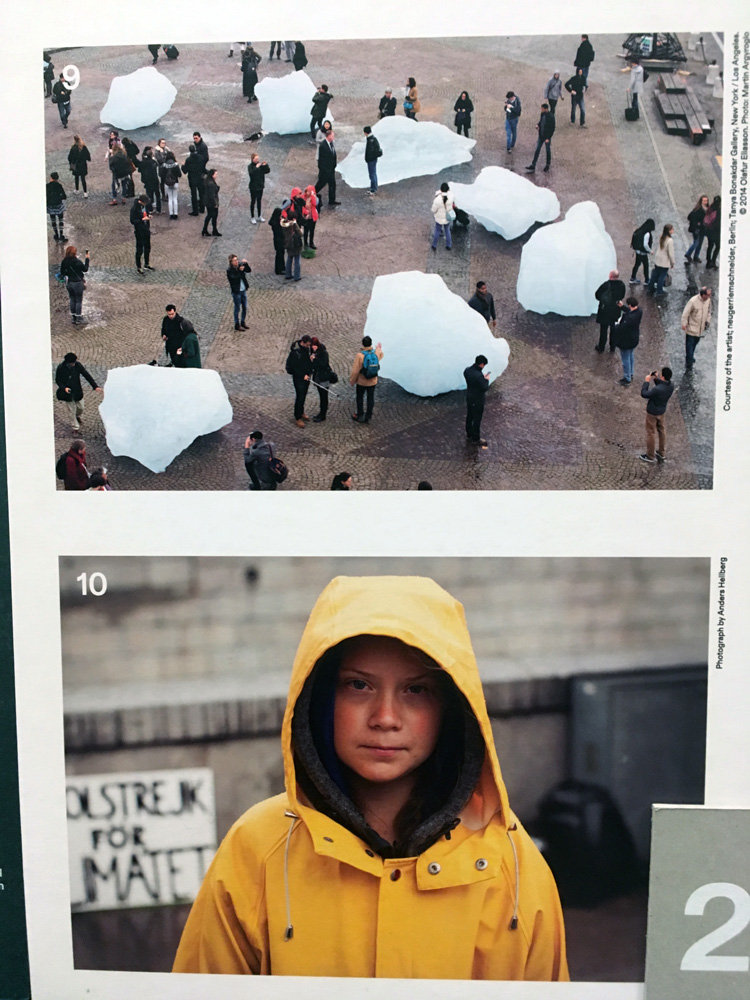 The founding of Greenpeace in 1971 is one of the high points against a catalogue of 20th-century catastrophes. We finish up in the 21st century, starting with the coining of the term “Anthropocene” in 2000 by Nobel Prize-winning scientist Paul J Crutzen, to describe “a new geological age in which human activity is the dominant influence on climate and the environment”, and are brought up to date with Greta Thunberg’s 2018 launch of the school climate strikes and Olafur Eliasson depositing several lumps of Greenland ice outside Tate Modern. There are some scant pointers to the future: 2020, when the world population is predicted to reach 7.8 billion; 2025, the date when Copenhagen expects to become carbon neutral; 2030, the date by which global carbon dioxide emissions must be cut by 45%, according to the UN; and, finally, 2050, the date they must reach zero for life as we know it to be in any way sustained. 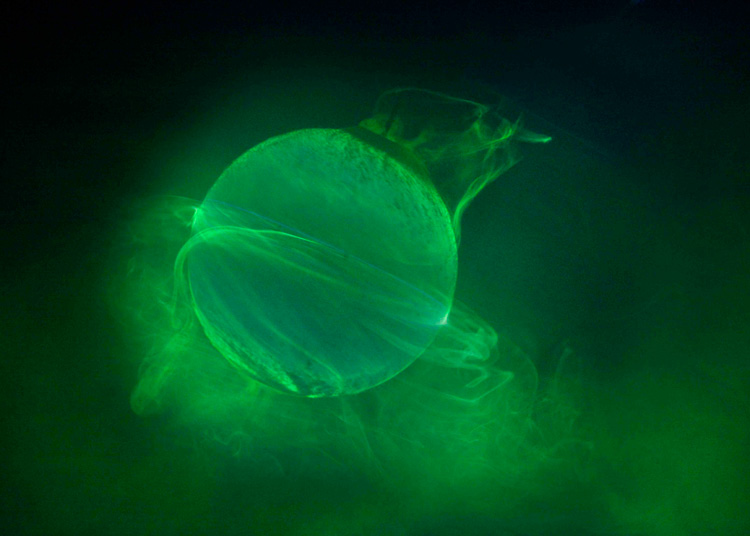 I am sure it is no accident that, while we are poring over those mostly anxiety-inducing events, we are hearing the plaintive melody of Camille Saint-Saëns’ Le Cygne (The Swan), played hauntingly on the theremin. It is part of the first artwork installed in the show: Paris-based design partnership HeHe’s Domestic Catastrophe No 3: La Planète Laboratoire (2018), featuring a globe suspended in an aquarium, which is slowly filling with a cloudy substance intended to evoke natural gases and manmade emissions. The choice of Saint-Saëns’ mournful swansong is supposed to embody the futility and apathy of the human response; an apt soundtrack. Perhaps a rallying cry would have been preferable? But activism is not what this exhibition seems to be about. Which is a disappointment to those of us lured by the term “visionaries”. I was hoping to be shown the efforts that architects, designers and artists have been putting into finding a way out of this mess. But this exhibition is more of a reflection on the role that artists and architects have played in highlighting our plight, intensifying our awareness.

There are many works that mine this rich emotional seam. One of the hardest hitting is A Film, Reclaimed (2015), by Ana Vaz and Tristan Bera, which collages 19 minutes of sequences from film history, focusing on movies where humans are united with technology in ways that usually end badly, ranging from Edward Scissorhands to Frankenstein’s Monster. These are interwoven with additional documentary footage, overlaid by voices addressing the current climate emergency and political volatility. “Our economic system is at war against the planet,” we are told. There are deeply distressing scenes of whale slaughter, a giraffe spouting blood from bullet holes in its neck as it flees its attacker, and a particularly trenchant quote from David Hemmings’ character in Michelangelo Antonioni’s Blow-Up: “Nothing like a disaster for sorting things out.” The subtext is clear: we are the agents of our own destruction. 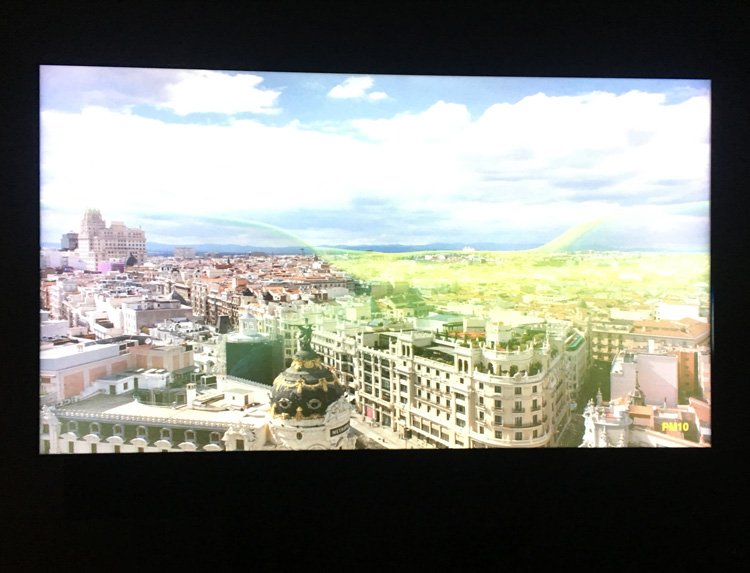 Nearby, we have a section of Carolina Caycedo’s beautifully presented, folded Serpent River Book (2017), from the series Be Damned (2013-ongoing), looking at large-scale dam-building across Latin America, and its social and geographical impacts. One of the problems with artists’ and architects’ responses to our looming environmental disasters is that they are so picturesque, so aesthetically seductive. That is certainly true of architect Nerea Calvillo’s video Madrid In the Air: 24 hours (2019), part of her long-term research project to demonstrate the presence of pollutants in our cities. The research has a worthy aim, as part of a campaign to create awareness of the higher levels of pollutants in poorer areas. But Madrid looks weirdly pretty as the pink or blue filters representing pollutants saturate or fade from the screen. 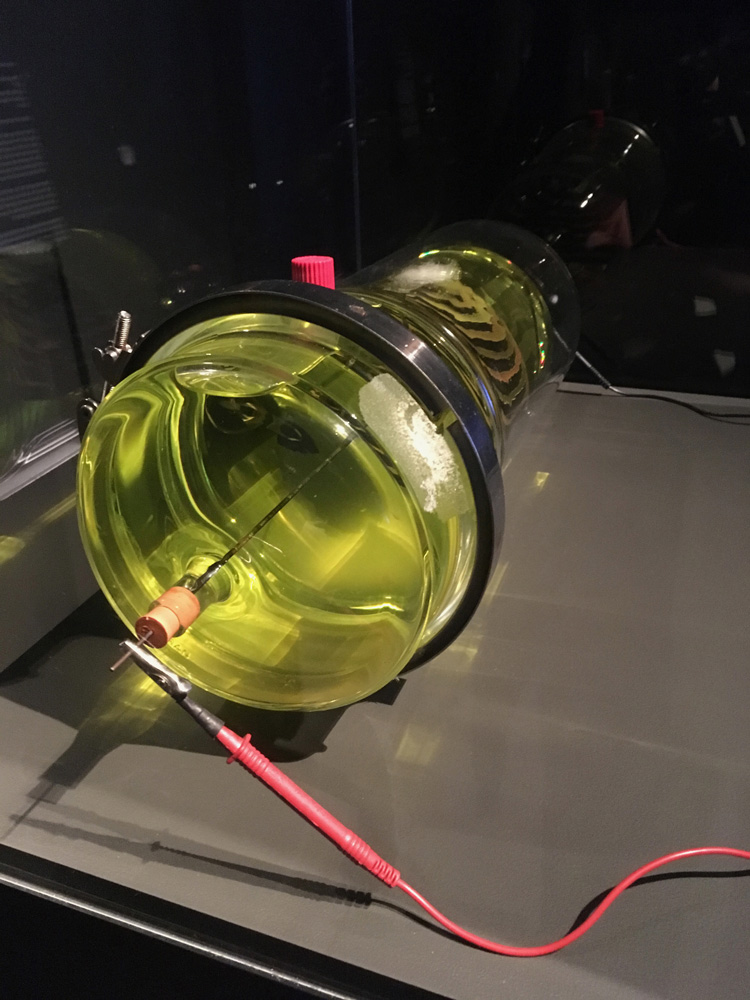 Unknown Fields. We Power Our Future with the Breast Milk of Volcanoes, 2016-18. Photo: Veronica Simpson.

There is such seduction, too, in the harsh landscapes of Bolivia’s salt flats, depicted in the film We Power Our Future with the Breast Milk of Volcanoes (2016-18), by the design collective Unknown Fields. The film shows the lithium fields of Salar de Uyuni – which hold at least half the world’s known resources of lithium, used in high-performance batteries. The evaporating lakes that filter the lithium are shown in their progressive stages, progressing from vivid blues to greens and, finally, greenish-brown. The work hopes to flag up the Indigenous people’s attachment to this area, for its mythic qualities, as well as reveal the environmental cost of seemingly clean energy. Nearby, the artists have made an overscaled lithium battery, glowing with greenish fluid, which more clearly evokes the Breast Milk of Volcanoes in its title; a reference to an Inca origin myth that attributes the salt flats in question to the drying tears and breast milk of a mother volcano mourning the loss of a child.

Pinar Yoldas has created beautiful, sculptural objects in test tubes, in a speculative project imagining new life forms that might emerge from the Pacific trash vortex (an accumulation of 1.8 trillion pieces of plastic that have floated across the ocean). The two shown here, P-Plastoceptor: Organ for Sensing Plastics (2014) and Stomaximus: Digestive Organ for the Plastivore (2013), are at once fascinating and repellent. They come from his series An Ecosystem of Excess (2013-17), which reimagines a future where consumer waste and petrochemical pollution leads to new organisms, plastivores, which can digest and process this waste. 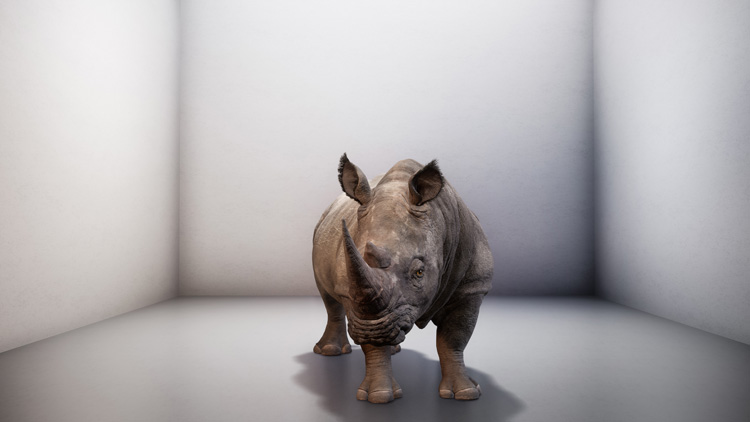 There is a danger in being too enthusiastic in embracing these dystopian futures. It helps to blind us to the emergency our behaviours have helped to trigger, and perhaps makes it easier to disengage. This is a problem that artist and designer Alexandra Daisy Ginsberg has discussed in the past, and which her work here touches on. The Substitute (2019) is a digitally recreated male northern white rhino – the poster-animal for mass extinction – its super-realistic form (complete with snorting soundtrack) disappearing and reappearing on the screen in degrees of pixellation. She intends it to be a sardonic comment on our tendency to think we can simply reproduce with technology what we lose in reality. 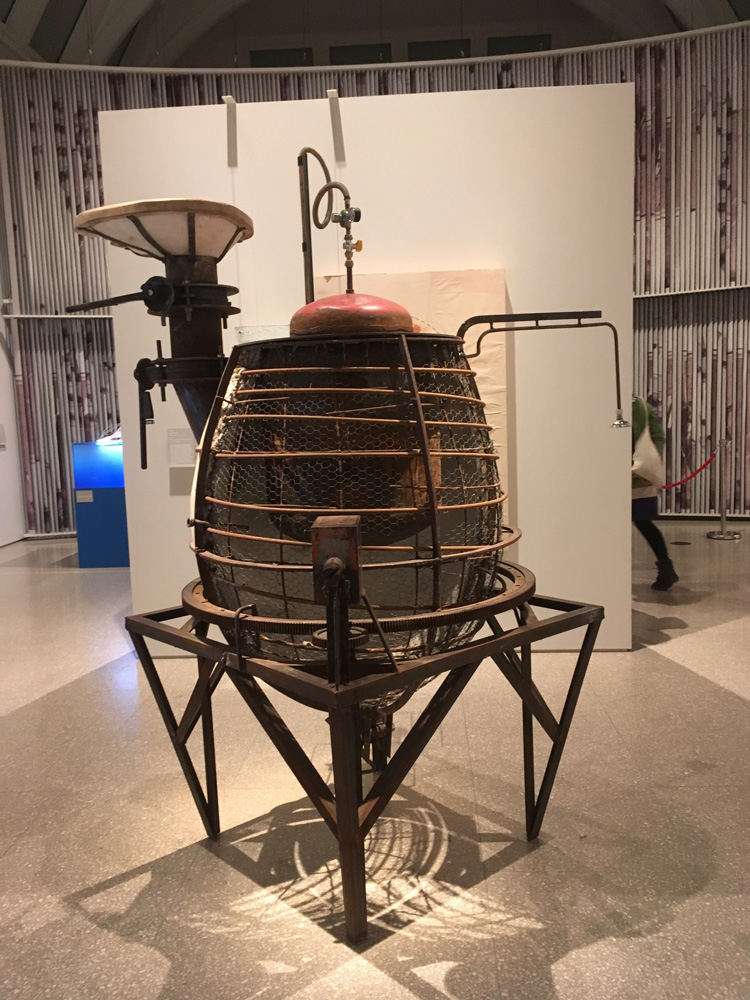 So, are there any interesting solutions? Not really. There is a throwback from the 1970s: Dolphin Embassy (1974-78), by Ant Farm, a US collective that proposed a floating community designed around interspecies collaboration, but that is very much in the realm of speculation. A more practical proposal is Skrei’s Biogas Power Plant (2017), a prototype for an individual biogas production unit that could convert domestic waste to energy. Another intriguing scheme comes from Andrés Jaque/Office for Political Innovation: Island House in Laguna Grande, Corpus Christi, Texas (2015-ongoing). It is a residential proposal designed to collect and preserve rainwater, and then use it to spray the surrounding parched ground to dilute acidity and toxicities and combat drought.

There are artists harnessing their energies to activism, in the shape of Futurefarmers, whose Soil Procession (2015) film is shown here, commemorating an event in which a procession of Norwegian farmers carried soil through Oslo to lay the foundations of Losaeter, a cultural institute dedicated to art and urban food production. But where are those architects – often working with scientists – who are reimagining the materials, techniques and building methodologies that could help preserve or maintain our planetary balance? There are plenty of them, along with those doggedly reviving those time-honoured materials and techniques that served our ancestors – and the planet - extremely well. But they are not here.

Rimini Protokoll’s immersive piece ends the show. An experience you have to queue for, before entering a darkened room, with a small auditorium in front of a reflective screen. You are told to look at your companions, imagine their future  - who will die first, who will die last? Then you are asked to close your eyes. Spoiler alert: when you open them, you will realise that real moon jellyfish are behind the screen, a species beautifully adapted to survive and even thrive as the planet warms up and ocean levels rise. Jellyfish are the future dominant species, seems to be the message, if we do nothing about our current predicament. Let that be a warning – or, better still, a spur to action. 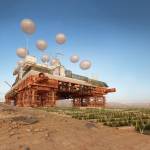 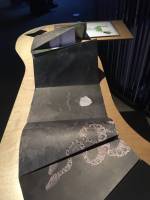 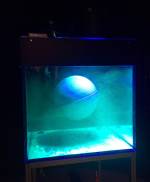