For the artist’s first UK solo exhibition, she combines experimental video works and sculptural installations of found objects in order to explore sociopolitical notions of narration, memory and representation

Dineo Seshee Bopape (b1981) has been regarded as one of the most exciting young artists to come out of the South African contemporary art scene in recent years. Her works have often combined psychedelic video montages interspersed among complex sculptural constructions (assemblages) usually consisting of found objects.

In a recent review for Studio International, I discussed an entire group exhibition dedicated to the contemporary practice of assemblage, Construction Industry: Contemporary Assemblage, Construction and Relief. The artists in that exhibition demonstrated that assemblage – as an art form – was still prevalent today. The majority of those artists, however, could not take the practice any further than the form itself. There were very few ideas circulating around the works other than the fact that they had been created in a particular way. Bopape, on the other hand – through the strong sociopolitical messages she projects throughout her work – has transcended this art form by using it intelligently as a vehicle to voice her views on the world.

Born in Polokwane in 1981, she graduated from Durban University of Technology in 2004. Following this, she graduated from De Ateliers, Amsterdam in 2007 and completed an MFA at Columbia University, New York in 2010. She won the 2008 MTN New Contemporaries Award followed by a Toby Fund Award from Columbia University in 2010. Since completing her MFA, Bopape has gone on to have solo exhibitions at the Mart House Gallery in Amsterdam (2010), Annarumma 404 in Naples (2010), the Stevenson Gallery in Cape Town (2013) and at Hordaland Kunstsenter in Bergen (2015). This brings us now to her first UK solo exhibition.

Walking into Slow -co- ruption is very much a multisensory experience. A lot of artists aim for their solo exhibitions to feel to the visitor as if they’ve just walked into the world of the artist. This exhibition – without hesitation – feels exactly like that. All across the room on television screens of varying size is grass green (2008), a set of different VHS videos playing focused-on extracts from nature. Not only is there an inherent contrast here in the video technology projecting scenes from nature, but there is also a contrast with these videos against the artificial grass that has been laid out all over the floor. Ideas about the corruption of nature by man-made items are expressed here almost immediately.

On the wall facing visitors as they enter are speakers projecting bird noises and other more obscure sounds from nature. Although these images and sounds are generally considered to be fairly comforting and soothing, there is a sense of unrest, conflict and surreality to the overall picture. With the speakers quite loosely hung from the wall – and looking very bare – combined with the washiness of the VHS, there is a mildly sinister undertone running throughout the room. In an interview with the show’s curators, Bopape provides some insight into why this undertone comes through: “The works in the show somehow refer to a rupture of sorts – a corruption akin to the process of dementia/Alzheimer’s … a corruption of relationality.” This corruption of relationality is illustrated perfectly in grass green as we, the viewers, struggle to relate to the eschewed sights and sounds of nature on display here.

The centrepiece of the exhibition is a site-specific installation entitled same angle, same lighting (2009/2013/2015). In this grand and complex assemblage, Bopape has created a composition comprising many objects including: manikin hands, spy cameras, portable LCD screens, cardboard tubes, wooden lampstands, floral-print keychains, pieces of paper, various pieces of wood and duct tape. It’s a piece that explores the way in which our various senses react to certain objects and space.

Time is also considered here through the act of repetition and recollection. The inclusion of the spy camera/LCD screens is perhaps the most poignant inclusion in this construction, with its direct suggestion of surveillance. This idea of surveillance continues all over the walls with small images of human eyes staring back at the viewer. Alongside these watchful eyes are images of flowers that are either native to South Africa or taken from home and garden magazines dating back to the end of the apartheid.

This strong sociopolitical voice is not just present within the work. Bopape even uses the space dedicated to her biography in the press release for the exhibition as a platform to highlight key sociopolitical issues: “Dineo Seshee Bopape was born in 1981 … during the same year of her birth, the Brixton riots took place; two people were injured when a bomb exploded in a Durban shopping centre; Bobby Sands dies; MTV is launched … Umkhonto we Sizwe performs numerous underground assaults against the apartheid state.” This is only a small segment of the full biography, but demonstrates quite clearly that Bopape is an artist with a political agenda. It would, however, be a mistake to say that her work is political art. Not only a mistake, but also a minor insult as her work tackles many different issues and notions. Instead, it would be more accurate to say that this is art made by a politically conscious individual. 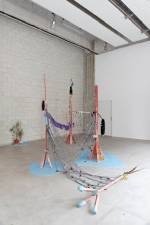