Assemblage, or “construction” – as Construction Industry’s curator Geoff Rigden (b1943) also refers to it – is an artistic form consisting of several, generally found but not solely, objects and materials assembled together. The resulting effect has often been characterised as three-dimensional collage. It started almost 100 years ago with Picasso producing the first constructions of this sort. It was a seemingly natural progression from his two-dimensional cubist constructions. A prime example of Picasso’s assemblage work is Still Life (1914), a composition consisting of painted wood and upholstery fringe. This work was one of the biggest statements Picasso ever made. Why? Because it suggested that the painting is also an object itself. The sculptor William Tucker championed the work as a masterpiece of the early-20th century and as a perfect example of the assemblage discipline that was beginning to take shape.

The key exhibition that cemented this art form’s place in art history happened in 1961 at the New York Museum of Modern Art (MoMA), and was entitled The Art of Assemblage. It featured many prominent 20th-century European and American artists, including Picasso, Marcel Duchamp, Georges Braque, Jean Dubuffet and Robert Rauschenberg to name but a few. It would go on to establish the art of assemblage as a global phenomenon and one that was indulged in by well-known artists.

Skip forward more than 50 years to now, and Construction Industry at the APT Gallery acts as a reaffirmation of the importance of assemblage to many contemporary artists. On entering the gallery, you are immediately confronted with a large, primary-colour-based sculpture by John McLean (b1939) entitled Traffic Yellow (2009). In the accompanying note on the artists, McLean provides a description of the work: “The composition came alive when I joined the non-existent corner to the neighbouring upright, using the red triangle. Its largest edge seems to strive for the upper and also slither down to the lower level, accompanied by the play between all the negative shapes. The latter make the tune while the big sheets make the harmony.”

This description provides some key insight into the process of creating an assemblage and what the essence of it is. Something that was virtually “non-existent” before, suddenly coming “alive” when connected with something seemingly opposed. A perfect introduction into the world Rigden wants us to delve into.

As an artist himself, Rigden has chosen to include his own assemblage work, which features throughout the show. Having studied at the Royal College of Art between 1963 and 1966, he has gone on to win several prizes, including the Pollock-Krasner award and a John Moores prize. His work has been exhibited all over the world through the years, and, more recently, was included in the 2013 Royal Academy Summer Show. In this current exhibition, however, Rigden might have been better off leaving his own work out. Not only are his pieces modest in scale, but their positioning – along the hallway and in tight little corners – suggests a reluctance to display them. This essentially creates an awkward feeling in the viewer. But perhaps this awkwardness lends itself perfectly to the somewhat awkward compositions?

Going back to the beginning of the exhibition – next to McLean’s Traffic Yellow – is the largest work in the exhibition, Lost Citadel (2015) by Geoff Mowlam (b1959). This impressive construction looks as though it defies gravity and includes an array of materials, including wood, glass, paint, canvas and aluminium. A sea of turquoise blue pours in and out of the composition while binding the other elements together, creating a sense of tranquility and chaos simultaneously. Directly opposite Lost Citadel is a sculpture called The Cat (1980) by Stassinos Paraskos (1933-2014). No single work in the entire exhibition demonstrates such admiration for Picasso. The cubist construction of a cat’s face with random pieces of painted wood is possibly the closest 3D interpretation of Picasso’s cubist style that you could bear witness to. You could easily be forgiven for believing that it was one of Picasso’s own constructions.

One of the key artists in this show is Willard Boepple (b1945). Since the early 70s he has established himself as an important and fearless American sculptor. He has exhibited all around the world and his work features in the collections of the Metropolitan Museum of New York, the Boston Museum of Fine Arts, Storm King Art Center in New York as well as The Fitzwilliam Museum in Cambridge. Rigden has chosen to feature two of Boepple’s works in this show: Gearless (2002) and Irish Corners (2007). Gearless is certainly the most interesting, bearing in mind the context of this show. It is a resin-based orange sculpture that resembles a mechanical part used in factory production. What Boepple suggests here is that it is the material of the object that truly defines its purpose. If the shape of Gearless consisted of a metal such as steel, then it would certainly have a more mechanical purpose, but because he has chosen resin, it makes the object practically useless. It is the least obvious assemblage work in this exhibition and yet it probably carries on that initial idea created by Picasso better than any other work featured in Construction Industry. The show may not feature the kind of well-known roster found in the exhibition at MoMA in 1961, but it certainly demonstrates that contemporary art still owes a lot to the art form that is assemblage. 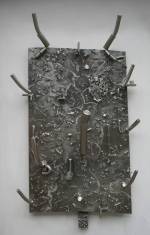 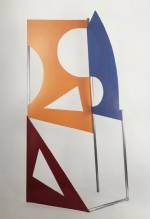 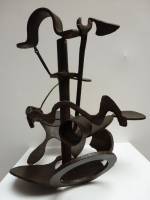