Even with its harrowing subject matter, Edward Kienholz’s controversial civil rights work deserves to be celebrated. This exhibition examines it in its original context of display, alongside other, often disturbing, works from 1959-1994 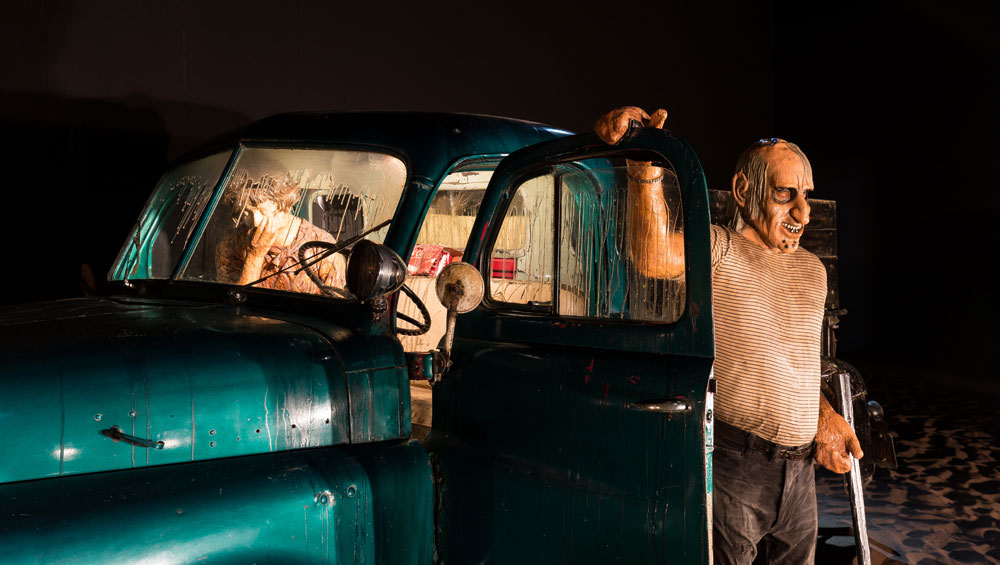 Titled after Edward Kienholz’s seminal and disturbing work Five Car Stud (1969-72), this exhibition at the Fondazione Prada Milan brings together 25 works made between 1959 and 1994 by Kienholz (1927-94) and his fifth wife, Nancy Reddin Kienholz (b1943). Curated by Germano Celant, director of the Fondazione, the exhibition culminates in the dramatic display of Five Car Stud, with a presentation of documentation about its first public appearance, in 1972 at documenta 5 in Kassel.

Now part of the Prada Collection, Five Car Stud was snapped up by a collector after documenta 5 and hidden from public view until 2011 and 2012, when it was shown first at Los Angeles County Museum of Art and then at the Louisiana Museum of Modern Art in Denmark. Now displayed for the first time in Italy, the work is the focus of the exhibition, which runs from the penultimate room of the Sud gallery to the Deposito in the former distillery building, converted by Rem Koolhaas and OMA and opened in 2015.

Kienholz and Reddin Kienholz’s artistic production saw them taking on topical social issues and transforming them into assembled tableaux of found objects, with an increased use of photography influenced by Reddin Kienholz. Before working with his wife, Kienholz had been working on smaller, more abstract, assemblages, which were often wall-based. Representing contemporary events from the late 1950s, the works also began to move into three-dimensional space; many of those in the exhibition are like theatre sets, ready for the viewer to become a part of them. Five Car Stud, which reflects the issue of racial injustice and conflict in America, is Kienholz’s most immersive piece of work, which makes it all the more powerful.

Walking into darkness, the temperature drops and cool black sand feels dense and damp underfoot. Time has stopped in the middle of an American desert, perhaps a mile or two from the nearest town. Up ahead, the headlights of five parked cars illuminate a scene that becomes clearer on approach. A lifesize group of white men with clown masks over their faces gather around a victim, a black man, on the ground; three men physically restrain him, while one wields a knife to castrate him. The victim’s stomach is an open tank of water with floating block letters spelling out NIGGER. Walking around the group in this frozen moment is chilling. In one of the cars, the girlfriend of the black man sits crying as the heinous crime is committed; in another, the wife of one of the perpetrators hides her face in fear.

The story unfolds that the black man is being brutally punished for having a relationship with the white woman in the car. While fictional, the work was not far from the horrible reality of many black Americans living in the south less than five years after the USA’s 1964 Civil Rights Act.

When Five Car Stud was shown at documenta 5: Questioning Reality – Pictorial Worlds Today, curated by Harald Szeemann, violent racism in America was a real and contentious issue. Written correspondence between Kienholz and Szeemann, from the Getty Research Institute archive in Los Angeles and displayed in the exhibition, tells of the attempted destruction of the work by some rightist German visitors. In a reply to Szeemann, Kienholz says that, while the work’s reception in Europe was strong, American critics had taken offence at it. The implication was that the scene in Five Car Stud had hit a nerve and, indeed, the work was not shown in America until 2011.

Further archive material, including reviews of documenta 5 from the Los Angeles Times, the Financial Times and the New Yorker, are included in the display. There is also the opportunity to see two editions Kienholz made for the presentation, Sawdy (1971-72), two Datsun pickup truck doors through the windows of which can be seen the Five Car Stud scene, subverting the position of the viewer to an onlooker driving by. These skilfully, almost ornately constructed editions, show the attention to detail with which Kienholz worked, conceptually and physically.

As well as turning the spotlight on America’s poor civil rights record and continuing crimes, Five Car Stud presented another layer of critique on American culture, one that runs throughout the exhibition – a critique of the passivity of media and entertainment. The title was a play on the name of the poker game five-card stud, and the work was originally displayed inside a circus tent. Kienholz, who was at that time living in LA, had bought the clown masks from the Hollywood Magic Shop, a well-known shop for magicians in Hollywood. A scarily fine line between social issues and passive entertainment is trodden as the viewer strolls around Five Car Stud as an omniscient voyeur.

This vocabulary of entertainment features across the exhibition in other tableaux, including The Bronze Pinball Machine with Woman Affixed Also (1980), a misogynistic pinball machine, The Merry-Go-World or Begat by Chance and The Wonder Horse Trigger (1991-94), a merry-go-round of life or death, and a series of works critiquing television-watching and consumption, including The Twilight Home (1983) showing a couple at home; the man is staring at the television with his face fixed in position, while the woman turns away, her face trapped inside a television screen.

Kienholz grew up on a farm and learned carpentry, plumbing, mechanics and engineering in preparation for working as a rancher. During high school, he experimented with painting in oil and watercolour, then later began constructing panels of nailed and glued wooden scraps, which was the beginning of the formation of his body of work. He moved to Los Angeles in 1953 and opened the Now Gallery in 1956, and then, in 1957, with curator Walter Hopps, the Ferus Gallery, establishing himself in the art world while continuing his artistic practice, making efforts to use the material skills he had learned throughout his life.

In the late 50s, Kienholz began using the “box form” of unfolding panels for his assemblage works, which he called “tableaux”. He would hunt through junk shops and scrap yards to find objects such as mannequins, car parts and old television sets, chopping them apart, adapting them and rebuilding them in a surreal way that brought his sculptures to life. Using resin and glue, he would cast the objects together, fixing them in position while also achieving a glossy layer of yellowing Americana fade that is present throughout the works.

Assemblage was a form of two-dimensional collage in which objects were layered roughly and aggressively as a way to express the gritty reality of life, a strain of abstract expressionism, cubism and surrealism, combined with key forerunners such as Pablo Picasso and Joseph Cornell. It was a movement that grew in the West Coast area, where artists such as Wallace Berman, George Herms and Bruce Conner were practising with similar techniques to Kienholz in the 1950s. What distinguished Kienholz’s work were his steadfast sense of moralism and his commitment to exposing social injustice. The assemblage technique strengthened the sense of realism that he wanted to communicate to his audience.

In the rooms that run up to Five Car Stud, the exhibition presents works by the Kienholzes that address gender, religion, child abuse and the media, in charged, violent and disturbing ways. The exhibition opens with The Bronze Pinball Machine with Woman Affixed Also, which shows the spread legs of a headless woman protruding from a Playboy pinball machine. The female body is displayed as part of this game, used for the pure entertainment of a man. There are further graphic and shocking assemblages looking at the victimisation of women by men. The Rhinestone Beaver Peep Show Triptych (1980) shows a woman with the head of a rat, trapped naked in her metallic dungeon peep show, and, in the same room, The Pool Hall (1993) shows a headless woman sitting on the corner of a pool table, her legs spread, while men wearing antlers shoot balls into the woman’s bloodied body.

It was in 1981 that Kienholz declared that all works from 1972 onwards would be credited to both him and Reddin Kienholz, perhaps recognising this as an act of his own social responsibility towards women as equals in society. While Reddin Kienholz was jointly involved in the vision and making of the works from 1972 until Kienholz’s death in 1994, it is clear that the works all take a male perspective of women as powerless victims, showing stereotypical American male domains such as the peepshow, the games arcade and the pool bar.

The works are often shocking in their nature, notably The Bear Chair (1991), in which a stuffed toy bear is staring into a dressing-table mirror while sexually abusing a child who is tied to the legs of a chair, the words “If you ever tell I’ll hurt your Mama real bad” carved into the dressing table. Paedophilia, child abuse and domestic abuse were topics that were not openly addressed visually in society, yet Kienholz and Reddin Kienholz made these difficult topics visible and physical as a way of processing the evils of US society.

Art critic Robert Pincus compared them to literary figures of 1950s and 60s America such as Allen Ginsberg and William Burroughs, instead of their artistic contemporaries. He wrote: “In turn, their art demands that one employ the skills of the literary critic as much as those of the art critic; to be as cognizant of literary history as art history.”1 Through their visual storytelling, Kienholz and Reddin Kienholz looked to reflect the realities of contemporary society in a gruesome, disturbing, yet often very honest way, to force their audiences to look in the mirror and question the role they played, or didn’t.

Reference
1. On a Scale that Competes with the World: the Art of Edward and Nancy Reddin Kienholz by Robert L Pincus, published by University of California Press, 1990, page xiii. 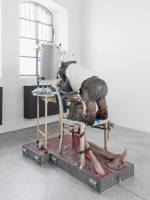 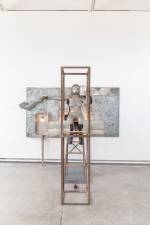 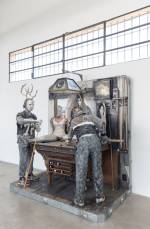 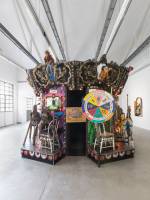 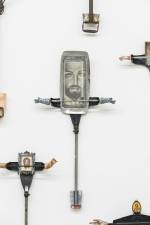 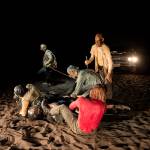 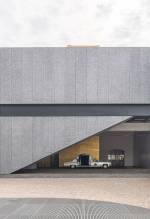