A microcosm of Chinese art and social change at Ipswich Art Gallery – this group show of works on paper by contemporary artists from China draws on, plays with and subverts the canons of art history from both the east and the west 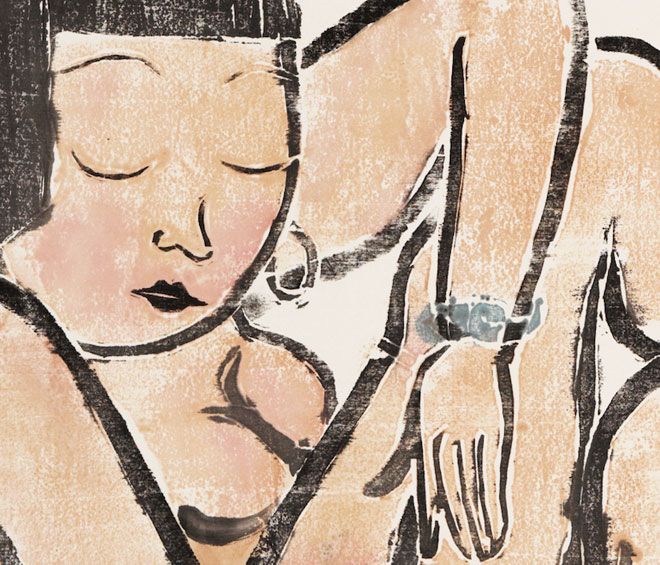 Ipswich might not seem the most obvious place for an exhibition of works on paper by Chinese artists, but resident of nearby Wivenhoe, Robert Priseman, who, in 2012, together with Simon Carter, set up the group Contemporary British Painting (CBP), and, with his wife Ally, is building the Priseman Seabrook Collection, is one of the curators, and the initiative builds on previous undertakings, including the exhibition Contemporary Masters from Britain, which toured 80 works of art from this collection around four Chinese venues between July 2017 and January 2018. This reciprocal relationship offers exciting opportunities for those at the British end, as well as for students, teachers and established artists in various cities and provinces across China. Marco Cali, the second curator, for example, has recently been spending time teaching at the Xi’an Academy of Fine Arts – taking western methods to the sponge-like Chinese students, and, in turn, gaining eye-opening insight into the course structures and media available in art schools on the other side of the globe. The third curator is Zhang Xing, also a visiting lecturer at the Xi’an Academy of Fine Arts, who lives in London. 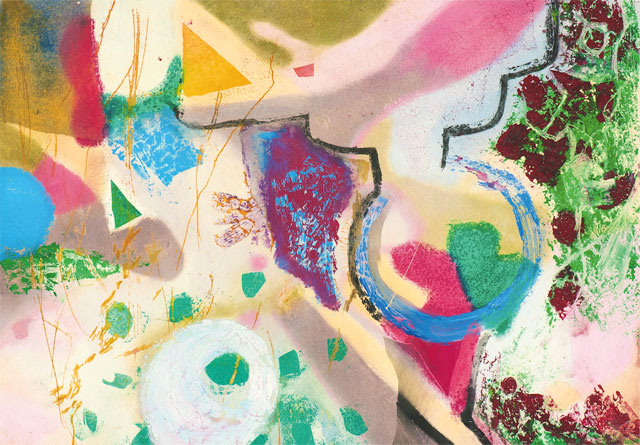 Together, Priseman, Cali and Zhang have brought more than 100 works by 73 artists from across China to Ipswich Art Gallery, creating an impressive exhibition, which Zhang describes as “a microcosm of Chinese art and social change”. In his introduction to the accompanying publication, he explains how it was only in the 1980s that Chinese artists had their first encounter with western contemporary art and how, alongside the burgeoning impact of the move to a market economy, Chinese students and artists have, in the ensuing three decades, been absorbing and transforming this influence. The value of traditional ink painting has, for the first time in centuries, been questioned by the Chinese art community – for a while, it was seen as a dead art with no future – but, as Li Wang, a known name in China, who, alongside his works, is also showing a short video of himself in his studio, says: “Fortunately, in the end, perhaps no art really dies; only artists run out of creativity.” But there is plenty of creative juice flowing through this show, accompanied by palpable passion, a peppering of anxiety, and more than a little experimentation. If anything, this collection of works expresses the tension – as pleasurable as it is fraught – of the current climate of artistic development – a fruitful and joyful playground – where old meets new, east meets west, and conceptual meets figurative. 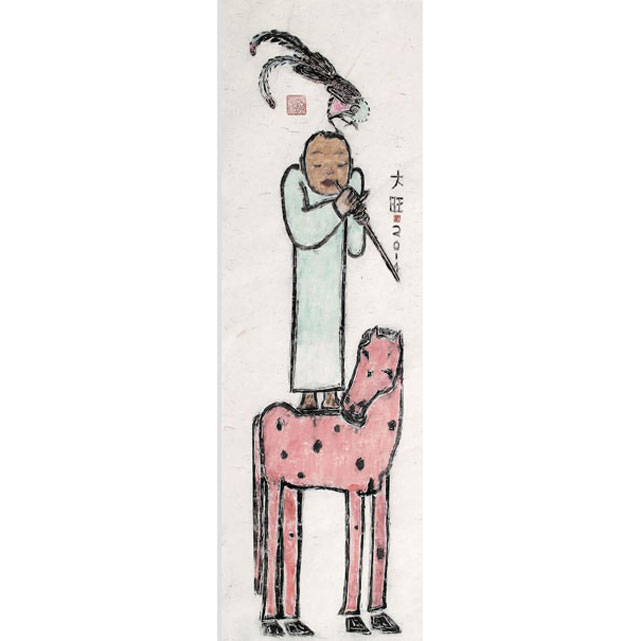 Accordingly, some of the works included are fairly traditional looking, such as Wang Yifeng’s Fruit & Juice (2017), depicting a spindly wine glass and bowl of cherries, accompanied by carefully scripted calligraphy and a number of red stamps – the traditional form of signature. Others, however, are very contemporary, with Yao Zhihui’s Mobile Phone Live Broadcast Series Healthcare (2016) comprising a collaged piece with digital printing and overlaid text. As Li further suggests, however: “There is no such thing as new and old art”, and his work Carefree (2014) is a beautiful synthesis of a traditional scroll and the subject matter of festivities with contemporary flair. “I want my picture to be in a state of peace,” he says. His Beauty Series (2015), made up of four woodblock water prints, is one of my favourites in the show – something like contemporary (albeit better fed) Egon Schieles, but with the naked female forms crouching and folding to fit themselves into the frames.

In the side room where Li’s film is playing on a loop, two larger works are cleverly juxtaposed: Yu Aijun’s The Woods, Art District (2016) with its thin, scratchy black-and-white etched lines next to Qiang Shijun’s Untitled-5 (2017) with thick, colourful ink strokes, a child-like figure and a range of compelling shapes, verging on abstract expressionism. Both works have an inherent sense of freedom and play, but contrast on nearly every aesthetic level. 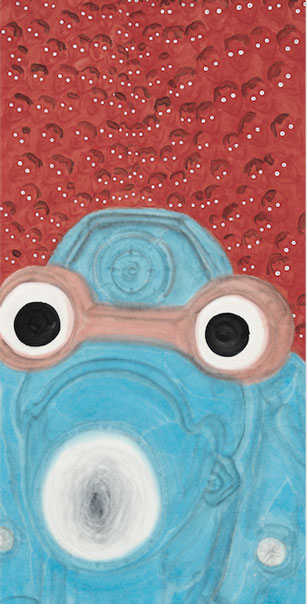 Another silently beautiful work in this room is Wang Chao’s Chinese Ink Painting No 39 (2017), made by soaking the paper completely on the floor and applying the ink in one continuous motion. The result looks like a wave of water – faint, grey and smoky – but somehow the ink doesn’t bleed, so that while appearing to have formed of its own free will, there is evidence of skilful control on the part of the artist. Zhang Xiaotao’s Preparatory Sketch for the Painting Vast Territory of the Motherland (2015) – an industrial scene with two tall chimneys – likewise uses the blotting and pooling of ink in water to create a smoke-like effect. What becomes apparent from the works on show is both the exceptional quality and variety of paper used and the skill of the artists in applying the ink to these subtly different surfaces.

Traditionally, Chinese calligraphy is an art learned by rote, copying from a master, and, since Chinese paper is very absorbent, the ink will run and smudge and pool and blot if not expertly applied. In his accompanying text, Priseman gives some fascinating background to the development of calligraphy during the Han Dynasty (206BC–220AD), a period during which the traditional silk, wooden strips and bamboo scrolls were superseded by the evolution of the cheaper and more portable medium of paper. Zhang, smiling but serious, adds the cheeky but probable claim: “The first person who used paper to make art must surely be a Chinese artist.” The contemporary artists in this exhibition experiment with all different types of paper, and even when the subject or composition could be western, as, for example, is the case with Liao Zongrong’s wistful watercolour Reading (2017), that material and technical quality shine through. 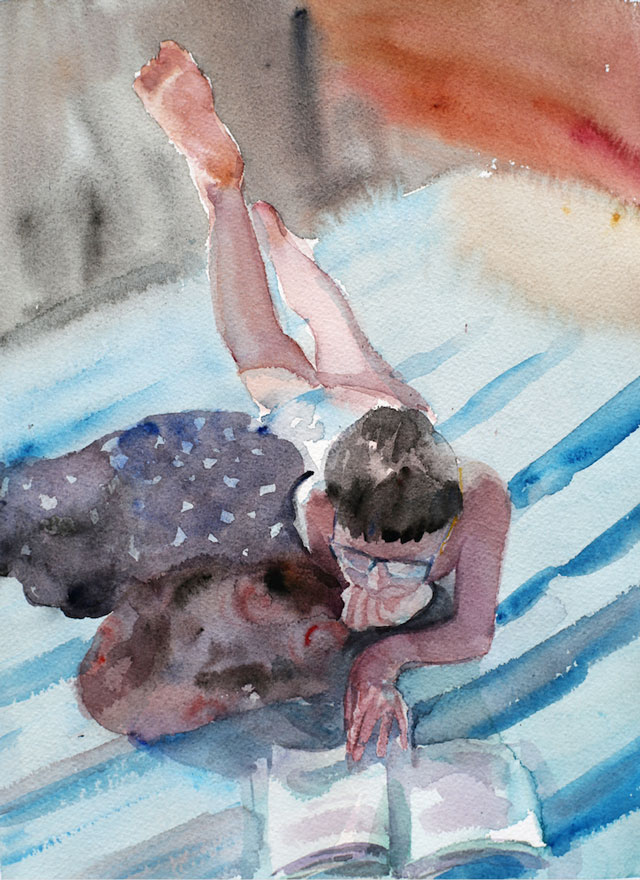 Another key artist included in the show is Jiao Ye, whom Priseman describes as “the David Hockney of China”. His abstract art, rebelling against the old regime, its strictures and traditions, is nevertheless largely based on animal and flower imagery. Black Animal (2005) comprises energetic charcoal swirls – somewhat like Willem de Kooning’s – but look closely and the eye and beak of a bird emerge, alongside the terracotta colour of its eggs in a nest. Nearby, the very delicate 5pm (2017) provides shocking contrast. A drawing by Wang Fenghua, it shows one of the few low, old buildings that remain in an area that is fast being built up with high rises. This technically impressive feat is awesome, demanding the viewer virtually to press his nose against the glass to believe it is not a black-and-white photograph, so exquisite and exact is its detail. 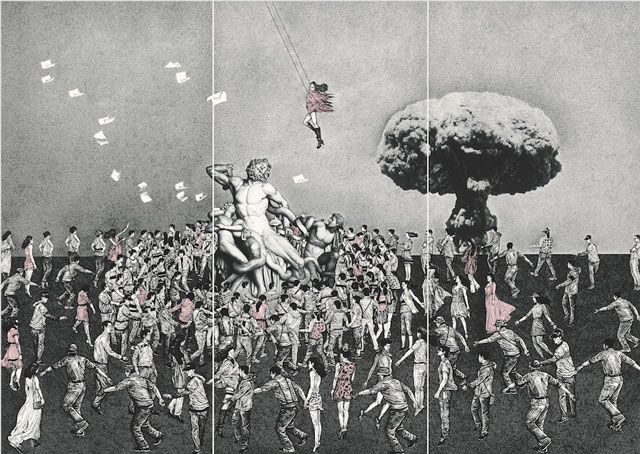 Some works reflect apparent western influences, including Shang Changrong’s Her and the Mountain (2013), which has something rather Louise Bourgeois about its blood-red, tentacled figure; Li Jikai’s On the Grass (2016), a pencil sketch with an air of Vincent van Gogh; and Xiao Hua’s Strange Blue, But only when you look at it a bit longer (2016), painted in blue and yellow on thick, handmade paper with stitching, blending the colours of Joan Miró with Paul Klee’s sense of taking a line for a walk. In a more canonical vein, Yang Yang’s Still Life (2014), a pastel sketch with a skull and two pomegranates, draws on the western iconography of memento mori and fertility; while Zhang Minjie’s Stage Series No 3 (2013-16) verges more on iconoclasm, with a lithograph depicting a mass of Chinese people – some in contemporary dress, some more like warriors – dismantling a classical Greek statue with a nuclear mushroom cloud billowing in the background.

It seems somewhat derivative to view these works solely through a lens of art history – be it oriental or occidental – but this contextualisation is necessary so as to better appreciate the artists’ struggle to (re)define their identity – and art – in an age of changing politics, expanding society, overrun by mass – and social – media. As Cali essentially concludes, this is the “first wave of Chinese artists who truly inhabit the world at large”, and I look forward to seeing more of their works coming to be exhibited here in the UK.