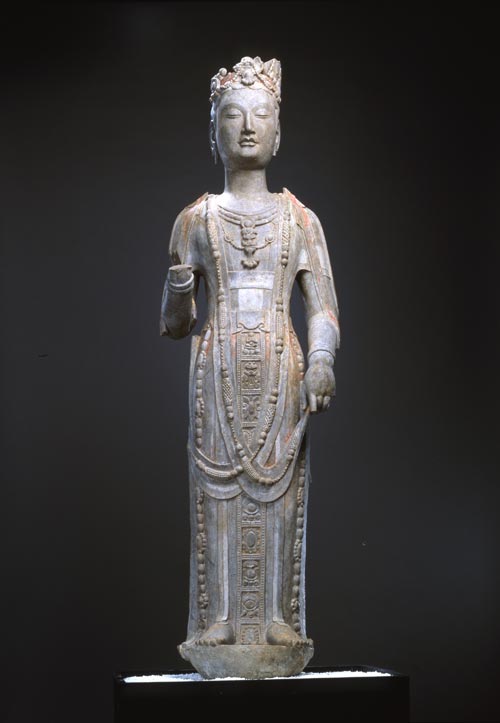 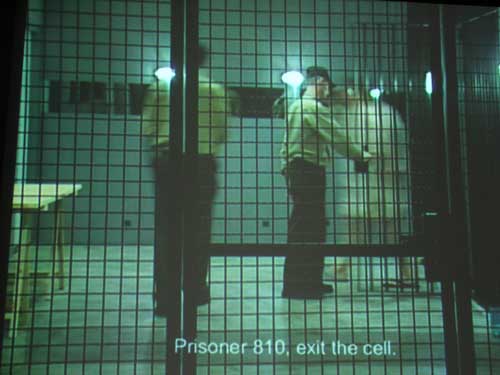 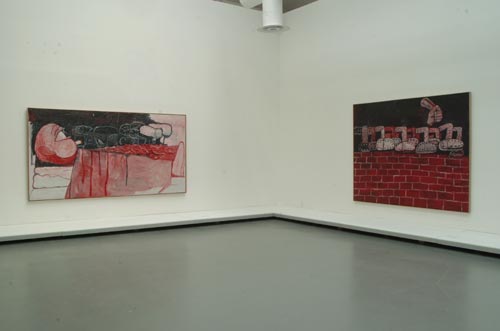 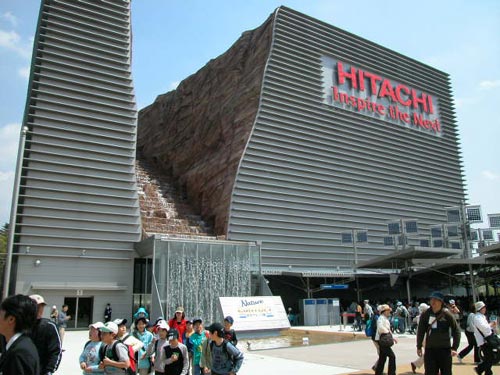 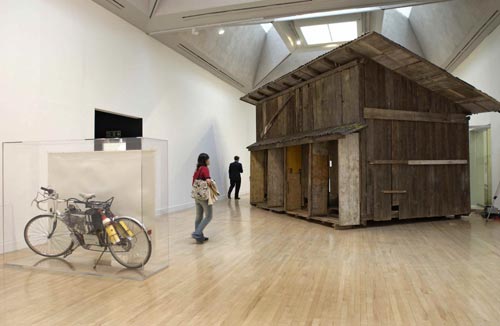 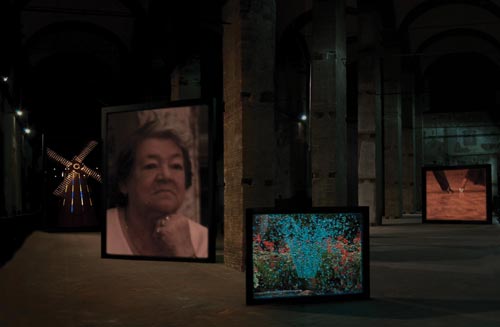 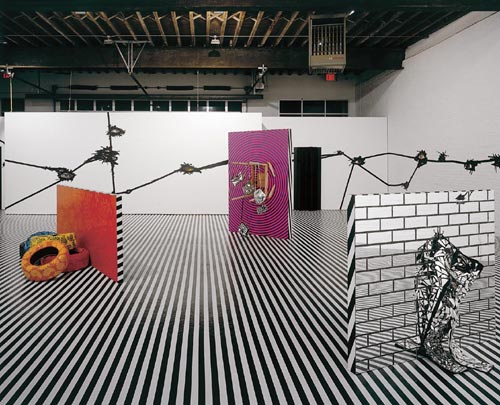 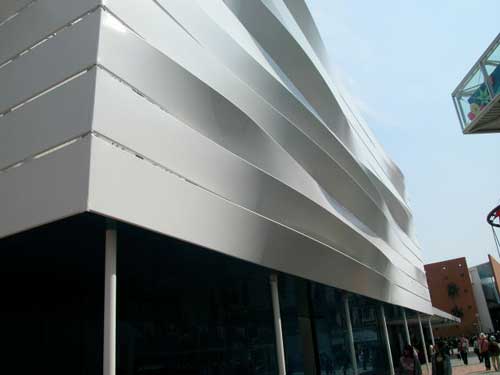 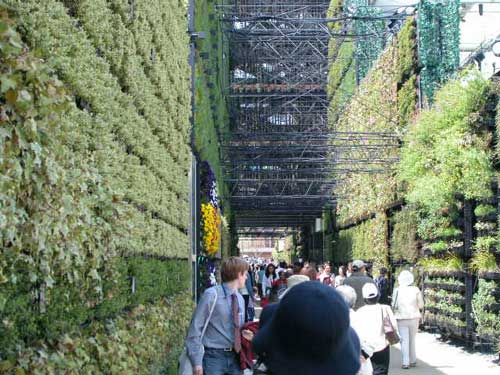 China's Artistic Evolution, Then and Now
China: Crossroads of Culture
Follow me! Chinese Art at the Threshold of the New Millennium

China's current rush to globalise its economy and, to some extent, its culture, is affecting all aspects of its society, especially the arts. The present situation is bringing about dramatic change, but it is not the first time in China's history that intense artistic activity has been the consequence of the country's extended economic and intellectual dialogue with the world at large.

Tokyo's Mori Art Museum, best known for its promotion of contemporary art, recently surprised its visitors by juxtaposing China's ancient and modern art in order to demonstrate how the country's art has over time been influenced by contact with other cultures. The museum set itself the ambitious goal of drawing parallels across two epochs, separated by some 14 centuries, to show how globalisation, defined as 'the collision and integration of Chinese with foreign culture,'1 has affected the country.

The exhibition, which ran from 2 July-4 September, contrasted two distinct periods. The 'China: Crossroads of Culture' section depicted art in China between the Eastern Han period (AD 25-220) and the Tang dynasty (AD 618-907), which is universally regarded as the apogee of classical Chinese art. The second part of the exhibit, 'Follow me! Chinese Art at the Threshold of the New Millennium,' displayed some of the country's leading contemporary artists' interpretations of China's latest emergence on the global stage.

Both parts of the exhibition offered intriguing views of how the artists, intellectuals, rulers and people have embraced and adapted ideas from beyond their borders. 'China: Crossroads of Culture' included more than 200 relics, most of them funereal items highlighting the refined skills of ancient craftsmen as applied to materials ranging from gold to wood and textiles to terracotta.

Historians often refer to the period between the Han and Sui dynasties as 'The Age of Division' (AD 220-589). During this time, northern China was controlled by nomadic tribes, known collectively as the Wuhu, which consisted of the Xiongnu, Xiabei, Jie, Zhi and Qiang ethnic groups; the south remained under the sway of aristocrats who were forced to flee in AD 220 when the Han empire collapsed.

Viewers of the human- and animal-shaped figurines and decorative objects on display at the Mori could clearly distinguish the robust, muscular style and shamanistic character of the non-Chinese nomads in the north and the west, from the more delicate artistry of the settled Chinese. Over time, the distinction began to disappear as contacts increased between these groups through conquest, trade and migration, resulting in the adoption of foreign cultural elements found on both sides of the frontier. Indeed, discoveries in China of glass and precious metals from Byzantium (in modern day Turkey) and Central Asia are evidence that the interaction of ideas and objects extended far to the north and west.

Although Buddhism had arrived in China during the Han dynasty, it became dominant in the land only when it was embraced by the Wuhu, who became ardent followers of the Buddha. The Mori exhibition devoted much space to the religion's impact on the arts, displaying many stone sculptures, bronze statues and other Buddhist-inspired artefacts. Generally, art experts view this period as the height of Buddhist art in Chinese history.

The curators organised this section of the exhibition to demonstrate how the artistic themes of the 'Age of Division' had set the stage for the flowering of culture during the Tang dynasty, which followed the short-lived Sui period. Looking at the magnificent artefacts on display, which showed influences from the West on shapes and motifs, viewers could likely appreciate how four centuries of enthusiastic cultural exchange had contributed to the development and prosperity of the Tang era.

The second part of the exhibition, 'Follow me! Chinese Art at the Threshold of the New Millennium,' provided an intriguing contrast. Rather than art created for the nobility and wealthy patrons of ancient times, who alone could afford such elaborate tomb companions, the modern works by 19 mostly young contemporary artists critique the changes affecting China's society as runaway economic growth creates riches for some and undermines the livelihoods of others. The prevailing tone of many of the contemporary works is unease at how the country's race to modernise since the late 1970s has spawned a materialistic consumer culture.

The signature work in this part of the exhibit is Qingsong Wang's large-scale photos, which convey the sense of confusion and disorder that has been triggered by modernisation. 'Follow Me' (2003) attempts to encapsulate the wide range of issues that concern people in China today. In this large picture (120 x 300 cm), Wang portrays himself as a teacher dictating an English lesson, in front of a blackboard cluttered with a bewildering mix of English and Chinese slogans, exhortations and corporate names and logos scrawled in chalk. 'Let China walks (sic) towards the world. Let the world learns (sic) about China!' is the central slogan and one that appears widely across the country (occasionally with the name of the locality inserted to replace 'China'). According to Wang, 80% of the words and phrases come from official newspapers, which are controlled by the government as propaganda channels. 'Adam Smith,' 'Harald Szeemann', 'Hollywood', 'Great Oiympics (sic)', 'Venice Biennale', as well logos from McDonalds, Nike and Mercedes-Benz, are the recent arrivals, competing with more established icons and slogans that include 'Great Wall', 'Socialism', 'Marxism' and 'Guanyin', which means Bodhisattva, or compassionate being. Viewers might easily come to conclude that only confusion could result from trying to absorb and reconcile such contrasting messages and meanings.

Other works by Wang, 'White Peony', 'Red Peony' and 'Frosted Peony' question the survival of the essence of Chinese identity. The peony is the state flower of China, and the 'Taihu' rocks, from which the peonies grow, are considered by the Chinese people to be special stones that possess spirit and a soul. At first glance, the peonies in these three pictures resemble the ones in traditional Chinese paintings. But the flowers actually are made from thinly sliced animal fat and meat. The artist provokes us with questions: will these flowers retain their freshness for long, and can they survive the icy blast of the outside world?

Similarly, 'Calligraphy Waterfall' (2005), expresses the artist's concern about the fate of traditional Chinese culture. This installation project by the Yangjiang Group, formed by Guogu Zheng, Zaiyan Chen and Qinglin Sun, is composed of a pile of calligraphy paper hardened with wax. In traditional Chinese art, calligraphers are considered to have a very high level of scholastic attainment, or technical skill; most often, the subjects of the best calligraphic works are ancient poems by master poets. By contrast, the inscriptions in this work are 'quotes from international news stories and newspaper headlines that refer to terrorism, United States politics and similar themes.'2 This work elicits the question: in today's world overflowing with information, if the most traditional form of Chinese art can't escape the deluge of news, what can?

Fei Cao's video 'Hip-Hop' (2003) exhibited a much different tone. This comic piece showed some of the ways in which Chinese people from ordinary walks of life incorporate popular western music into their lives.

Yang Fudong, one of the leading figures in contemporary film-making in China, adapted the philosophy of traditional Chinese paintings - to reconnect with nature when one cannot find answers in current surroundings - in his work 'Seven Intellectuals in the Bamboo Forest, Part 1' (2003). This 29-minute film interpretation of the classic (which dates, incidentally, from the so-called Age of Division (AD 220-589), follows seven young men and women as they move in and out of pine trees and rocks in the mist-shrouded, foggy Huang Shan mountains in eastern China. They ask questions about life, fate, belief, love and family responsibility. Grounded in the tradition of classic art, Yang's film serves as a Chinese painting in motion.

A subject addressed by many of the artists whose work was displayed at the Mori is one that is among the most visible changes effected throughout China during the past 20 years: the dramatic remodelling of towns and cities as construction crews moved in. For example, in his installation work, 'Building Dodgem' (2001), artist Hao Lu created mini skyscrapers and traditional Chinese buildings made from acrylic on toy bulldozers that visitors could shunt around on a bright pink platform using remote controls. The work suggests that the masses are at the mercy of a very heated, chaotic real estate market in China.

Yong Shi installed 56 light-boxes, representing Shanghai's sky at night. Each box shows the top of a high building illuminated by glittering lights. Shi gave his work the title 'Shanghai Sky,' which until recently, nightwatchers viewed as a moon-and-stars filled panorama, a view that cannot be seen in the present day's nightly glare.

Yang Zhenzhong's 'Light as Easy' (type C-print) and 'Light as Easy 2' (DVD) feature the artist holding a symbolic tower, the Oriental Pearl TV Tower that looms over Shanghai, upside down, and trying to maintain his balance as he walks. Zhenzhong's walk mirrors the efforts that contemporary people in China are making to maintain their balance during the profound changes that are under way.

Fen Weng's 'Sitting on the Wall' series of photos depict girls from different cities gazing at skyscrapers in front of them. Viewers cannot see their faces, and so are left to wonder how to feel about the development on the other side of the walls.

Cao Fei and Ou Ning's video 'The San Yuan Li' documents how life has changed for people living in a small village that has been surrounded by development. Formerly, the village was known for its role in defending the country against British imperialism during the Opium War in 1840, but has lately become a 'village in the city', a ghetto for drug dealers, migrating minorities, prostitutes and young dwellers.'3 The village can be seen as an epitome of the unbalanced development of Chinese society; while such prosperous large cities as Beijing, Shanghai and Guangzhou now are crowded with modern skyscrapers, many old 'pockets' inside the cities and remote regions in other parts of the country have been left far behind.

For some artists, nostalgia is the defining expression of their work. Shao Yinong and Mu Chen's 'Meeting Hall' series of photos, Yin Xiuzhen 's 'Beijing Opera' and Zhou Tiehai's 'Movie Stars of the '80s Series' provide examples of this theme. One of the leading critics on Chinese contemporary art, Gao Minglu, once wrote that 'Chinese contemporary artists are the heirs of this sort of modern pragmatism. What they have applied when representing the urban phenomena of a globalising China is none other than the pragmatist perspective. Therefore, in works of contemporary Chinese artists, the urban landscape is not a reproduction of reality, but rather a mix of personal memory, historical memory, cultural memory and locality.'4

The exhibition at the Mori also displayed a series of four photos entitled 'Survivor.' In this series, the artist, Zheng Liu, captured men and women of different races with expressions of anger, fear and desperation on their faces. The dust and debris covering their faces and clothes suggest that they have just escaped from some disastrous event. Looking at these people, viewers may find themselves asking, 'Will they survive?'

The two parts of the Mori exhibition challenged visitors to examine the many ways in which Chinese artists have and continue to incorporate and respond to change, particularly change that is prompted and fuelled by foreign influences. While the pieces and themes highlighted in the exhibition are compelling in their own right, they cannot serve as a definitive testimony that a single unifying theme, such as 'globalisation', can adequately encompass real commonalities over such disparate epochs. The Mori exhibition was an ambitious and fascinating attempt to define important aspects of China's cultural transformations. The complex history of cultural manifestation is an area that requires continued exhibitions of this kind.