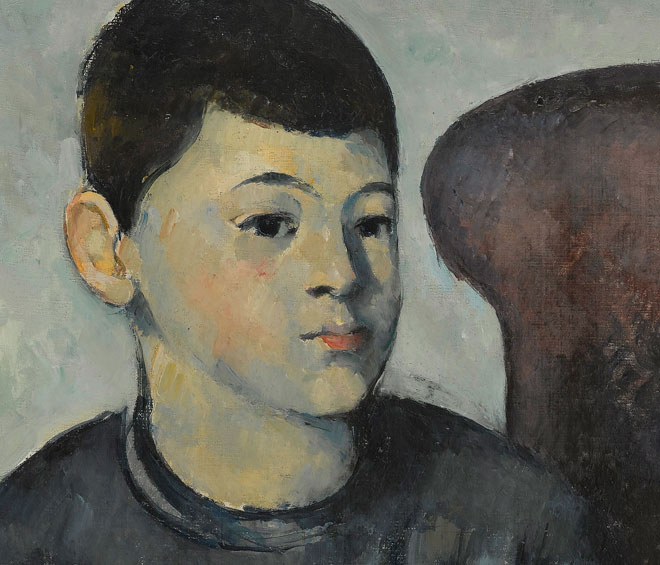 The woman with a coffee pot has integrity in the solid form of her hands. The character appears in a portrait by French post-impressionist artist Paul Cézanne (1839-1906), which could be a modern version of a Vermeer, with its geometrical approach to a domestic interior. Yet the Woman With a Cafetière (c1895) depicts a simple life, rather than a middle-class scene. The picture hangs in a room called The Working Class and the Art World in the Cézanne Portraits exhibition. The design elements show the artist’s ability to reduce forms to their essentials and his interest in treating nature “by the cylinder, the sphere, the cone”. His approach would influence the cubists, the fauvists and other avant-garde artists. Both Pablo Picasso and Henri Matisse are said to have called Cézanne the father of us all. 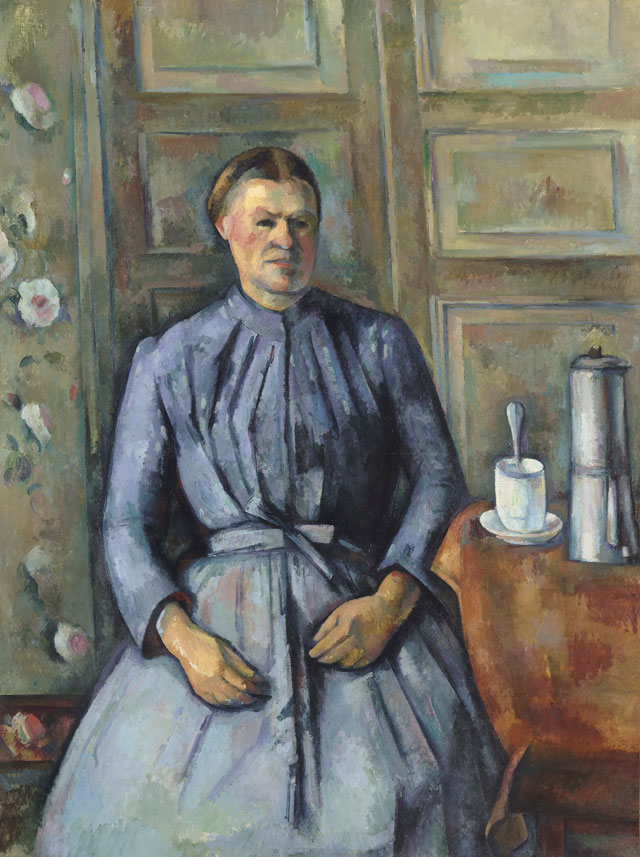 The modern masters were inspired by the posthumous retrospective of Cézanne’s work at the Paris Salon d’Automne of 1907. Although portraiture was included in that exhibition, the only previous show devoted to his portraits was organised by art dealer Ambroise Vollard in 1910 – a year when Freud’s writings were becoming renowned, and Virginia Woolf observed that “human character changed”. Now, in the 21st century, a major exhibition of Cézanne’s portraits is being held. With more than 50 from his oeuvre of almost 160 portraits, the show is a collaboration between the National Portrait Gallery in London, the Musée d’Orsay in Paris, and the National Gallery of Art in Washington DC. The exhibition explores how Cézanne’s painting style developed, how he learned from the impressionists, and went on to develop an innovative geometrical approach, grounded in human consciousness. 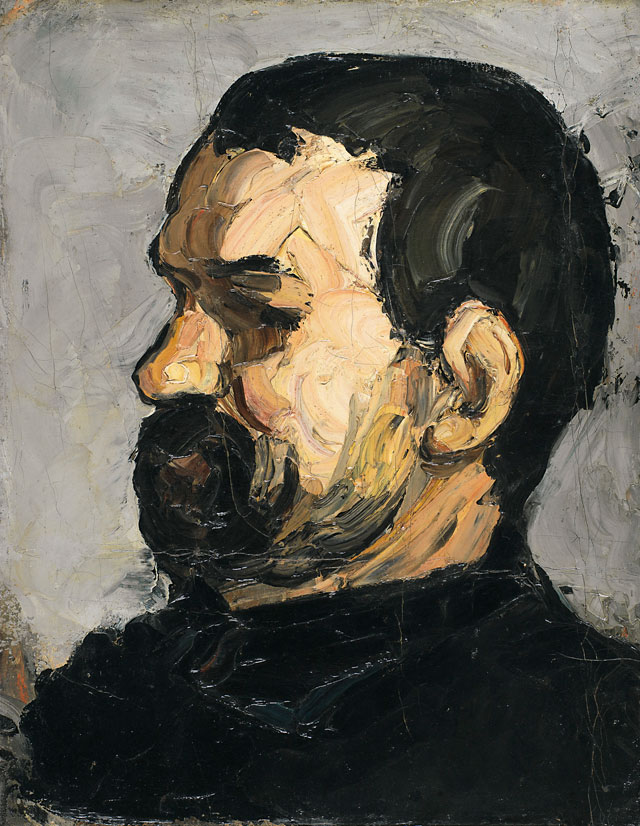 Paul Cézanne. Uncle Dominique in Profile, 1866-7. Lent by the Syndics of The Fitzwilliam Museum, Cambridge © The Provost and Scholars of King's College, Cambridge.

As John Elderfield, chief curator emeritus of painting and sculpture at the Museum of Modern Art, New York, and curator of Cézanne Portraits, says: “Cézanne’s portraits not only invite us into the world he knew, they also allow us to contemplate the continuing inventiveness of the artist at work. Unlike most of his avant-garde peers, Cézanne never received a portrait commission, and many of his painted likenesses of friends and family members offer little information in the way of his sitters’ individual personas, stature or psychology. More than his landscapes and still lifes, Cézanne’s portraits serve as markers or milestones in his long and prolific career, allowing us to ponder the key developments in his painting process and of his understanding of what portraiture can achieve.”

The exhibition suggests that Cézanne was not always the isolated figure described by artists and critics who studied his work. This can be seen in the playful portraits of members of his family, including his father and his uncle Dominique Aubert, and his friends from his native Provence in France. At the beginning, The Artist’s Father, Reading L'Événement (1866) depicts a strong figure in a matter-of-fact way, with an innovative still life of apples in the background. Interestingly, he is reading a liberal journal in which the novelist Émile Zola had published a defence of artists, including his friend Cézanne, who were rejected by the official Salon in 1866. 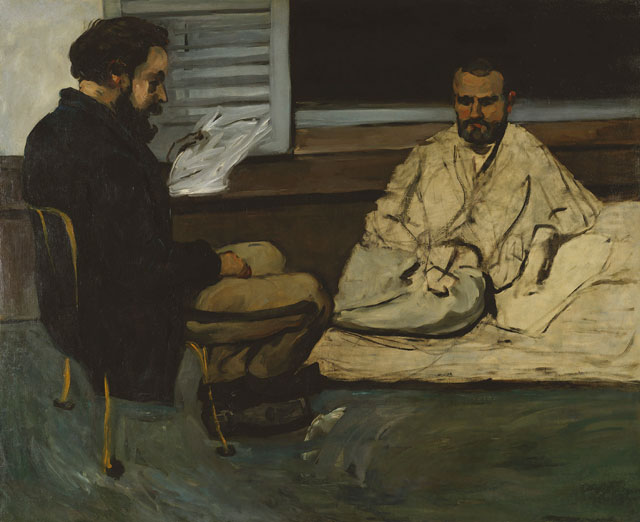 In a portrait of a pair of his early friends, Paul Alexis Reading a Manuscript to Émile Zola(c1870), the broad brushwork is evocative of the painting process of the elder statesman of the impressionists, Édouard Manet. Characteristic of the dark and brooding work of his early career, Cézanne painted a lyrical landscape, which could be read as an ironical comment on Manet’s Le Déjeuner sur L’Herbe (1863). Later, his growing interest in impressionist painting, the antithesis of academic practice, and his instructive friendship with Camille Pissarro, would bring a new lightness and brightness of colour to his palette.

The director of the National Portrait Gallery, London, Nicholas Cullinan, says: “While Cézanne may have learned a great deal from the impressionists, his aim was quite different, his vision unique, informed by a desire to see through appearances to the underlying structure of things by means of mass, line and shimmering colour. Nowhere was this more evident than in his portraits. This is truly a once-in-a-lifetime exhibition.” 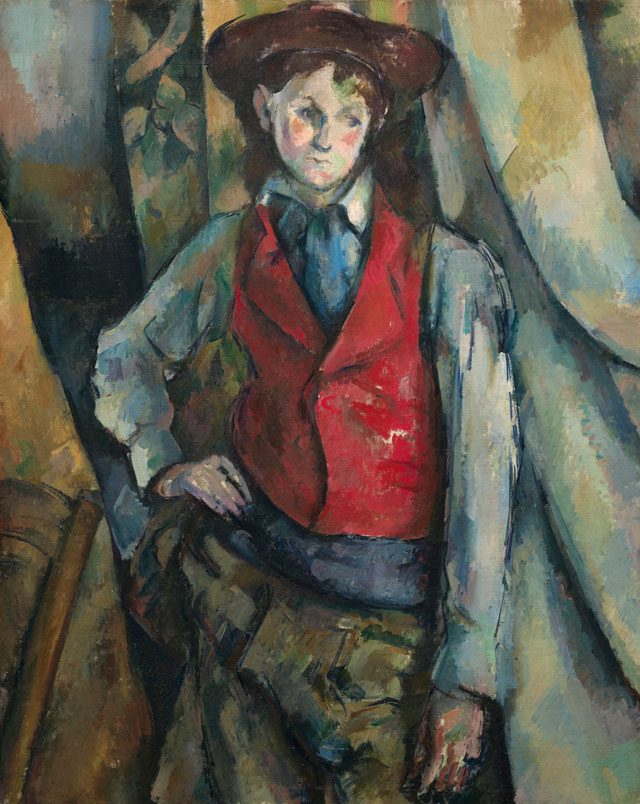 The quality and rarity of loans from international collections is outstanding. The exhibition includes Boy in a Red Waistcoat (1888-90), on display in the UK for the first time since the 1930s. Self Portrait With Bowler Hat (1885-6), which has never been displayed in the UK until now, is on loan from the NY Carlsberg Glyptotek, an art museum in Copenhagen. The display of the painting in a complementary pair is characteristic of Cézanne’s practice of painting multiple versions of his subjects. The exhibition succeeds in drawing out affinities between paintings and people. 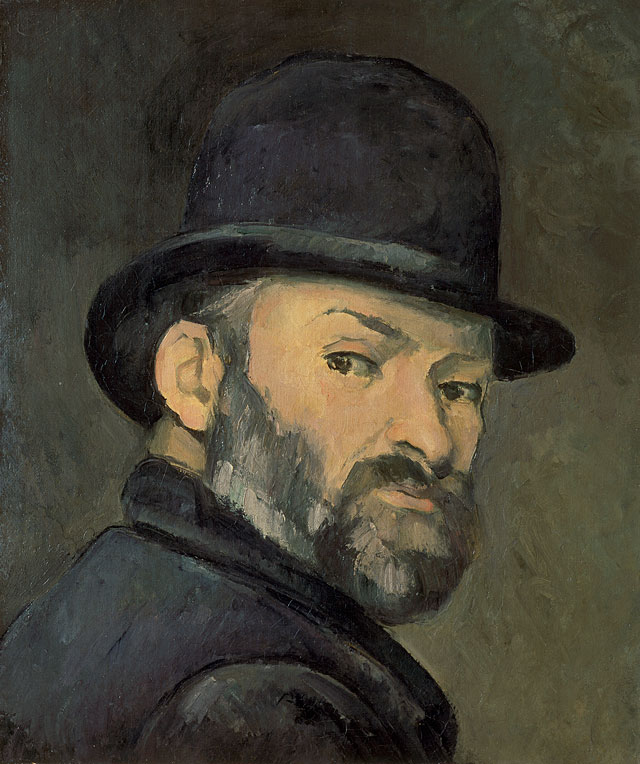 This is seen in portraits of Cézanne’s wife, Hortense Fiquet, whom he met in Paris in 1869 and who brought an equilibrium to his work. With humble origins as a seamstress, she was his model, muse and mother to his son. In the exhibition, you can find Hortense in 11 portraits: she appears calm and composed in early pictures, yet strangely vulnerable in later ones. Among the best-known is Madame Cézanne in a Red Armchair (c1877), its surface rich with layers of colour that mould the tapestry, as though she sits on a throne. The Austro-German poet Rainer Maria Rilke wrote about the portrait’s emotional power and “the consciousness of her presence”. 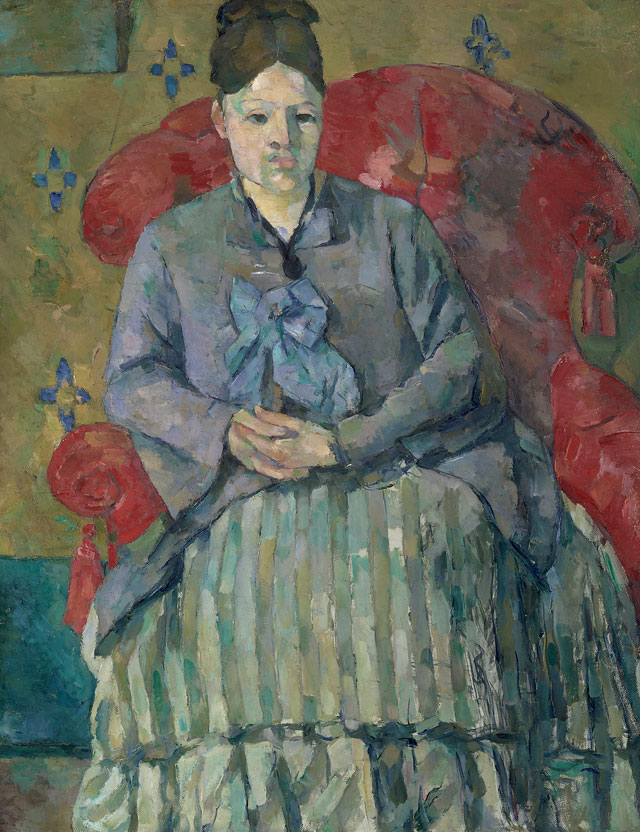 A dignified aura shines through many of Cézanne’s portraits of family and friends: from the Woman With a Cafetière to The Gardener Vallier (c1906). As the informative label to one final self-portrait explains, Cézanne would wear the gardener’s hat and coat, and continue his painting, conflating the identities of the old working man and the old artist. The practice suggests that the artist had a great sense of empathy for people, old and young. Cézanne showed kindness in speaking to young artists with whom he made friends in his later life. A deep humanity surfaces in this outstanding exhibition.

• Cézanne Portraits is at the National Gallery of Art, Washington DC from 25 March to 1 July 2018. 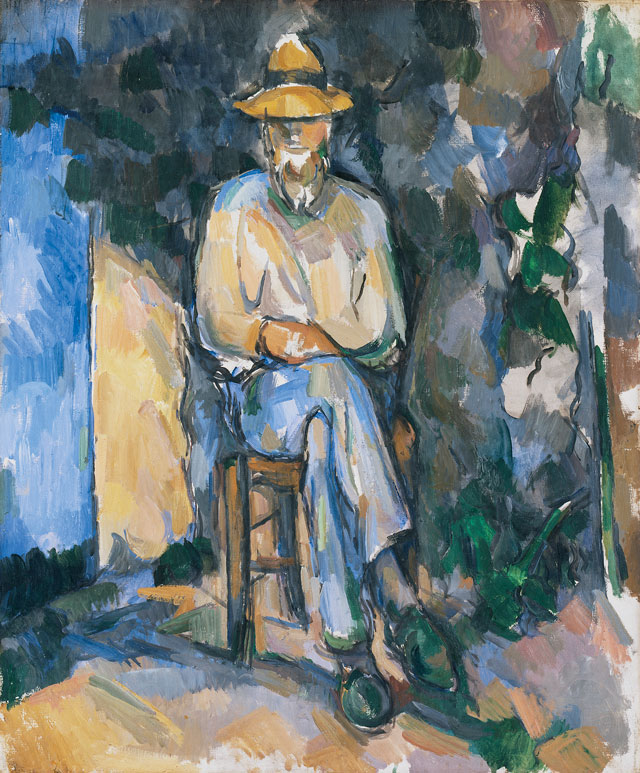 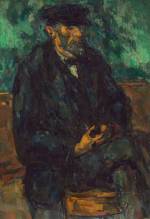