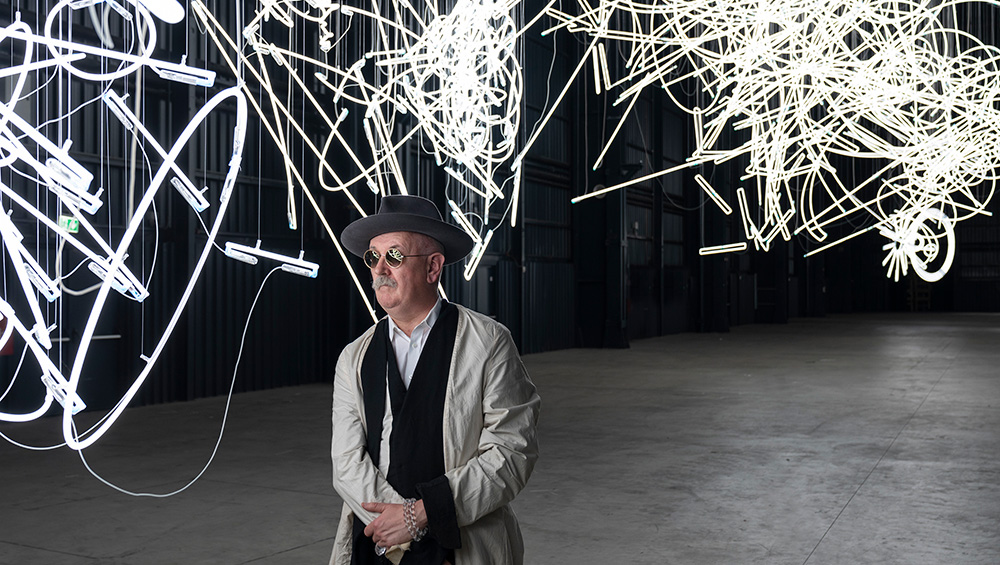 Cerith Wyn Evans’s largest solo show to date, “… the Illuminating Gas”, at Pirelli HangarBicocca in Milan, is dazzling and disorienting. The mid-career Welsh artist (b1958) has filled more than 5,000 sq metres (53,820 sq feet) of this former locomotive and farm machinery assembly plant with mesmerising light and sound sculptures and installations. Entering the exhibition, I was struck by parallels with the early “spatial environments” of Lucio Fontana, nine of which were recreated for a groundbreaking show in the same space in 2017. Those environments, which paved the way for Fontana’s signature slashed canvases, took the form of mini universes, where distorting perspectives and optical illusions using light and space played havoc with the senses.

Although Wyn Evans does not enclose his installations within box-like rooms as Fontana did with his environments, something similarly radical in terms of perceptual alteration and innovative use of technology is going on in this show. The first environment one encounters here is an installation of seven hanging columns of warm yellow light, StarStarStar/Steer (Totransversephoton) (2019), that feels like stepping into an enchanted, leafless forest. Enchanted because the golden “trunks”, segmented like bamboo, pulsate with light of different intensity at different moments: sometimes just one or two are illuminated, at others each emits an inviting glow of varying brightness. Close up, these columns glint like jewels. 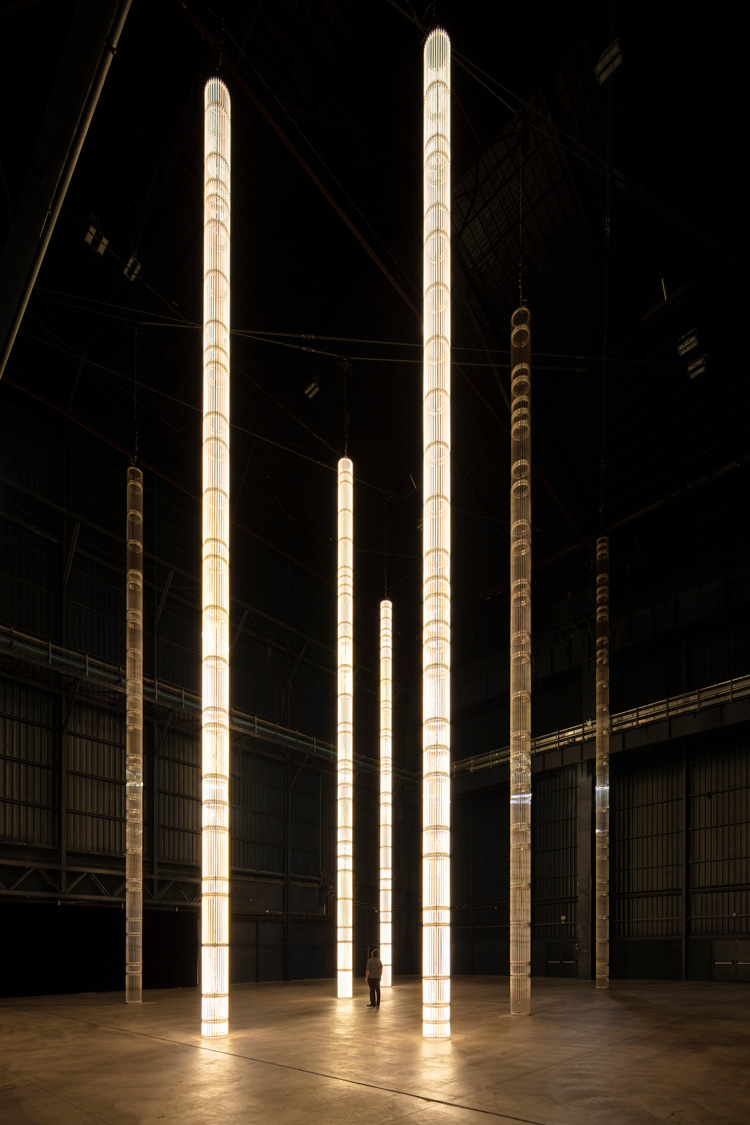 That there are seven of these ethereal 20-metre-high light columns inevitably draws a link with Anselm Kiefer’s monumental permanent installation The Seven Heavenly Palaces (2004-2015), located in the yawning hall beyond a black curtain. Kiefer’s teetering concrete and lead towers looming out of the cold, dank atmosphere present a desolately beautiful scene, rife with potential peril. In contrast, Wyn Evans’s columns invoke a celestial ambience, heightened by the sound of mournful wind music, which at first, misleadingly, appears to be coming from the works themselves. In both cases, these markedly different otherworldly environments reflect each artist’s engagement with philosophical ideas about mankind’s aspiration to transcend its Earth-bound existence, as suggested in the works’ titles. Whether intentional or not, the juxtaposition of these installations is a rich one. 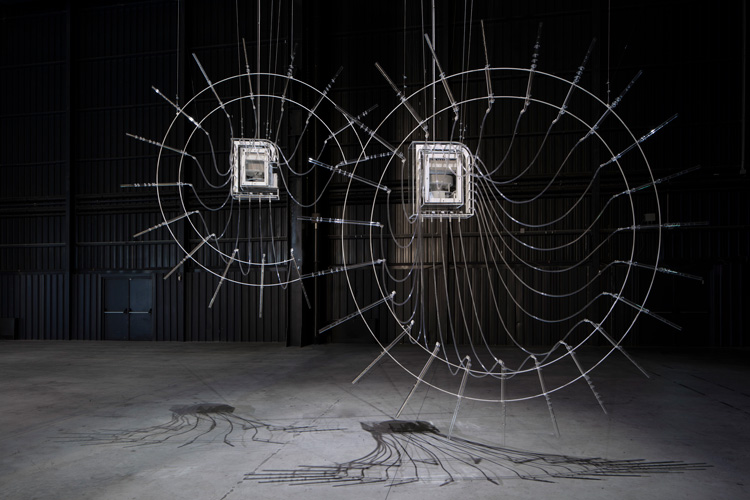 Gradually, one becomes aware that the haunting, breathy notes permeating the entrance to the exhibition are emanating from an ingenious contraption of glass pipes, arranged like the spokes of two wheels, Composition for 37 Flutes (in two parts) (2018).The work finds a formal echo in the neon piece Radiant Fold (… the Illuminating Gas) (2017-18), comprising one small and three giant circular elements, reminiscent of catherine wheels in the sky on bonfire night. These radiating disc shapes are repeated nearby and reference the “Occult Witnesses” – a set of optical devices – in Marcel Duchamp’s work The Bride Stripped Bare by Her Bachelors, Even (1915-23).

Duchamp is an enduring inspiration to Wyn Evans. Indeed the show’s title derives from Duchamp’s famously enigmatic diorama accessed through a peephole, Etant donnés: 1. La chute d’eau, 2. Le gaz d’éclairage [translated as Given: 1. The waterfall, 2. The illuminating gas]. In basing his exhibition title on an apparently minor detail – the gas lamp held by the sprawled nude in Duchamp’s tableau – Wyn Evans clearly signals his work should be considered in the same open-ended vein as that of his mentor. 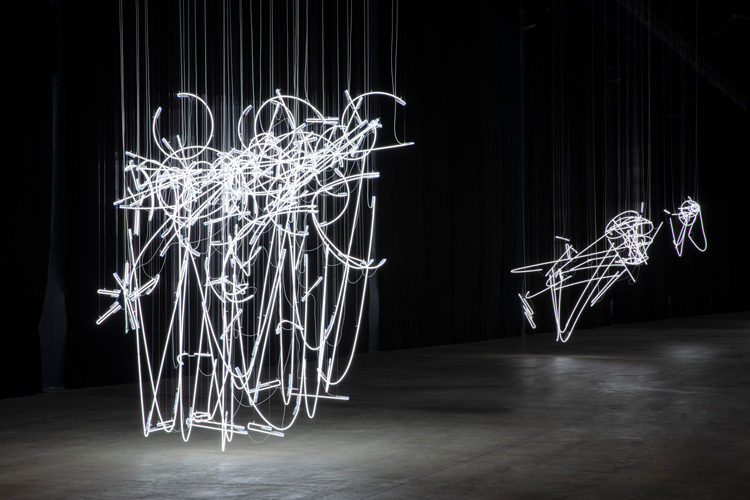 The exhibition advances into a cavernous area known as the nave that appears ablaze with white tangles of neon sculptures hovering in the air like an improvised jazz score or a complex mathematical equation. Of these neon works, 13 belong to the artist’s series Neon Forms (after Noh) (2015-19), inspired by the stylised gestures of classical Japanese Noh theatre. The artist has translated human actions such as the holding of a fan or rolling up of a kimono sleeve into a series of delicate abstract sketches in neon. It is as if each movement has left a trail of light in its wake, creating snowflake-like patterns that are held in place by barely visible strings from the ceiling. The centrepiece of the neon displays is a reconfiguration of Wyn Evans’s 2017 commission for Tate Britain’s Duveen Galleries, Forms in Space … by Light (in Time). Composed of kilometres of neon tubing, this elaborate work incorporates abstract drawings and recognisable motifs from across the show into a sprawling, ecstatic symphony of light and space. With their circles, arcs, straight and angled lines, they call to mind Wassily Kandinsky in his late geometric phase. Part of the delight of experiencing these works is that many hang at eye-level; as one walks between and around them, different shapes materialise from the livid squiggles – a bicycle here, an instrument there – and one can almost feel one’s physical body dissolving into their radiance. 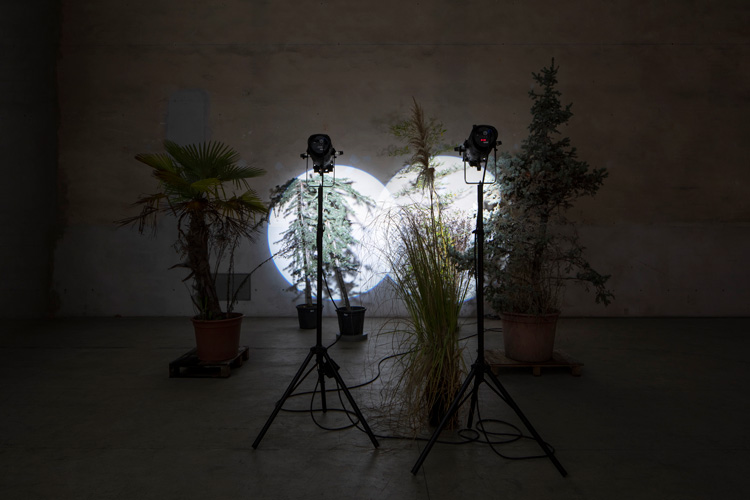 At the far end of the building in the “cube” once used for testing electrical turbines, nature is somewhat jarringly introduced in the form of a cluster of potted plants, some of which revolve slowly on turntables – perhaps a distant echo of the enchanted forest at the entrance. This installation Still Life (in Course of Arrangement …) (2019) involves two spotlights projecting the moving plants’ shadows on to the wall behind. 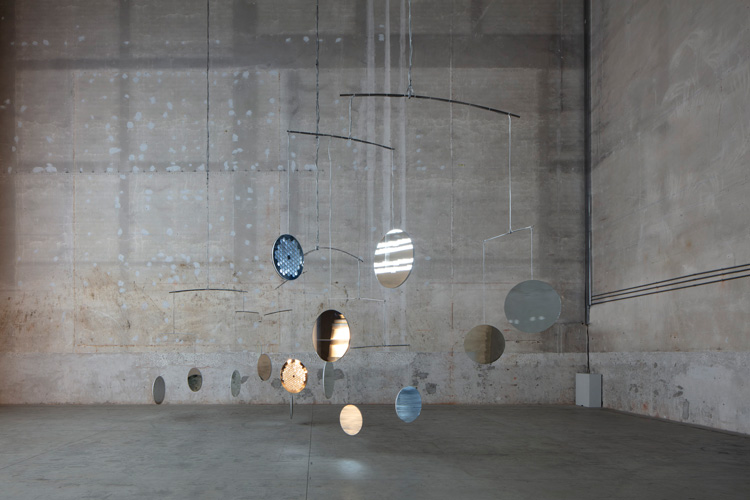 The theme of motion threads through this space, where light, sound and kinetic works vie for our sensory attention. The highlight is a marvellous polyphonic mobile titled C=O=N=S=T=E=L=L=A=T=I=O=N (I Call Your Image to Mind) (2010), consisting of 16 mirror discs at different heights, which rotate gently while transmitting a range of sounds from rock tracks to piano music to crackles captured by radio telescopes around the world. High overhead a giant neon text describes the trajectory of a solar eclipse across time zones and geographies. Injecting a surreally domestic note are two pairs of oversize Murano glass chandeliers – one placed high in the ceiling, the other just off the floor – which pulse gently with orange light according to a rhythm from a musical composition by Wyn Evans. In previous works from the Chandeliers series, the light’s rhythm has been dictated by texts by William Blake or Judith Butler, for instance, and then translated into morse code flashes. The textual connection is significant, reflecting Wyn Evans’ fascination with language and poetry. The chandelier works here are titled Mantra (2016) and S=U=T=R=A (2017), meaning a repeated formula and an aphorism respectively. 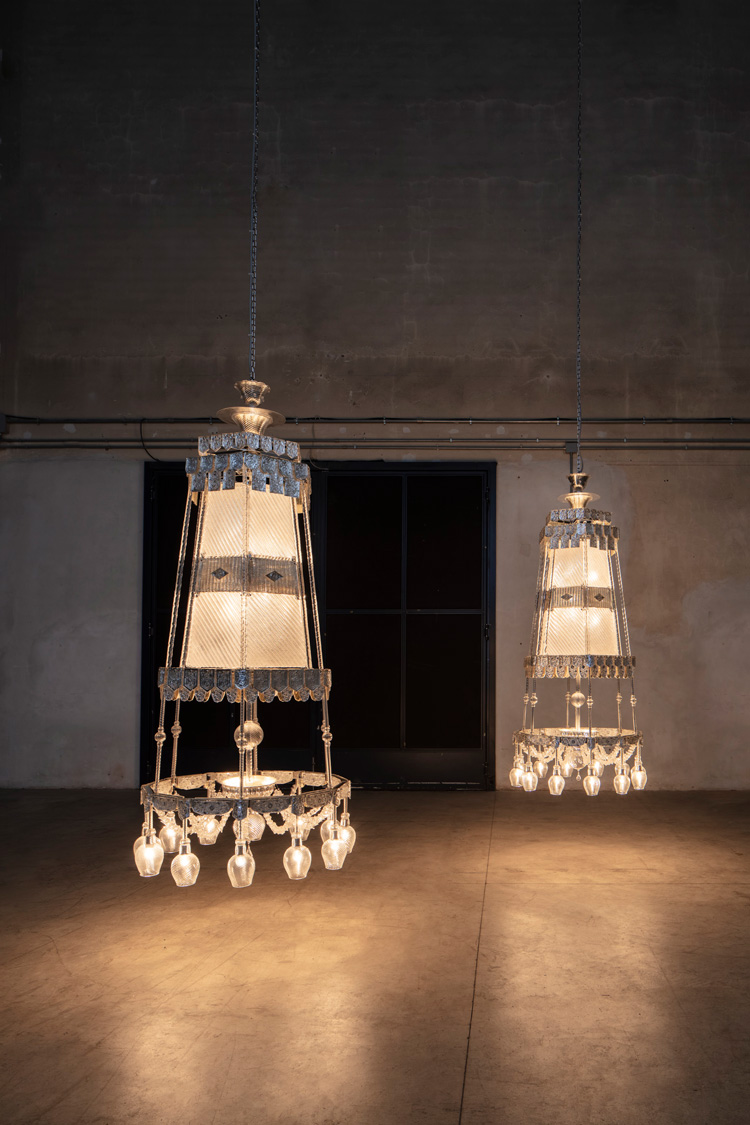 A vast lattice of references – to astronomy, science, philosophy, music and art history – connect the works in “ … the Illuminating Gas” like invisible electromagnetic waves. Yet whether one knows about sutras and mantras or Noh theatre is no impediment to appreciating them. There is a generosity to Wyn Evans’ art: as with the linguistic disruptions in his titles through ellipses, equals signs and bracketed afterthoughts, everything in his works is in play, nothing is fixed, meanings are porous. His exquisite luminous universe bestows a space for awe and for dreaming. 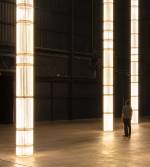