Cary Leibowitz: ‘I hate my aesthetic. I wish I was delicate and elegant and smart and earth-shattering’

Cary Leibowitz: ‘I hate my aesthetic. I wish I was delicate and elegant and smart and earth-shattering’

For his first major retrospective, the undersung American artist fills the ICA Philadelphia with more than 300 works that span a 30-year career. Leibowitz discusses how he established himself as an artist in the 1980s and 90s, and the origins of Candyass, his longstanding moniker 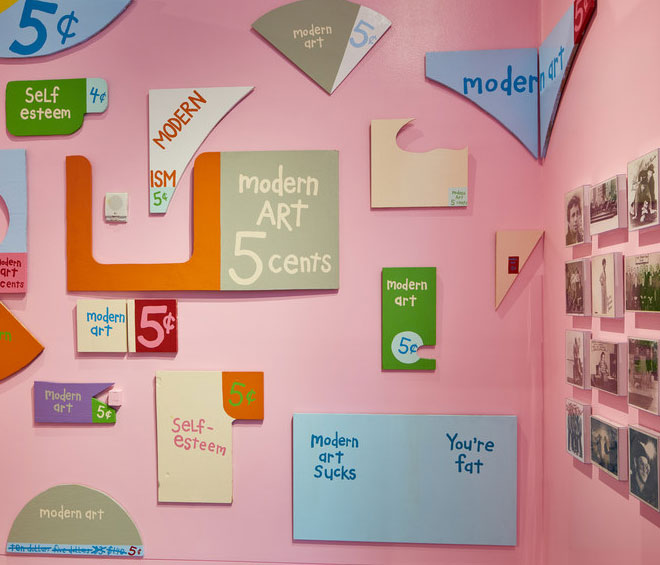 Cary Leibowitz’s filled-to-the-brim exhibition at the ICA Philadelphia, Cary Leibowitz: Museum Show, begins with a Japanese-style paper parasol that hangs upside down from the ceiling, under which visitors find themselves standing as they enter the gallery. Spraypainted across its ridged surface in indigo capitals is the inscription: “HEY I’M NOT DEPRESSED ANYMORE.” It is a helpful sentiment to keep in mind when grappling with the artist’s tone, which has always been his strongest medium; it is through one-liners, rhetorical questions, statements and stories that Leibowitz (b1963, US) makes his art.

Cary Leibowitz. If U Try Really Hard and Still Fail U Deserve All the Sympathy U Can Get, 1995. Latex paint on wood panel, 24 x 48 in. Courtesy of the artist, INVISIBLE-EXPORTS, and the Institute of Contemporary Art at the University of Pennsylvania.

One painting reads “if u try really hard AND still fail u deserve all the sympathy u can get,” while another depicts a pie chart divided into three segments, all of which contain the word “sad”. Following the wall’s perimeter in an orderly line is a series of works that offers declarations: “I LOVE Pina Bausch” precedes “I LOVE Yves Klein”, after which comes “I LOVE Alexander Calder.” In all, 36 artists are noted. The paintings are expressions of fandom, as well as markers of the importance of artists to Leibowitz. Consistently forthright, the artist’s messages are also routinely mocking, wistful and sad. Like the inaugural umbrella suggests, though, these are not hopeless works.

Occupying three gallery spaces, the ICA’s display captures the intrinsically personal quality of Leibowitz’s art, which started to draw attention in the early 90s. Biography may not inform every single memo, but the words are always coming out of his mouth. Given this preoccupation with the self, the lack of narcission is surprising, which is why Leibowitz’s works attract rather than repel. In fact, the obsession – and there is plenty – relates to others. Showbiz is especially compelling to the artist. Portraits of Liza Minelli and Angela Lansbury, personally signed by the actors and addressed to Leibowitz, hang proudly, while a series of found photographs depicting artists and celebrities are captioned by the artist using his signature thick black marker pen. A recent wall sculpture consists of a painted circular panel lined with knitted mittens that reveal the name “Greta Gerwig”, the rising film director. Such preoccupations tie in with Leibowitz’s tendency to collect. Ties and ceramics are of particular interest, and his house in New York is known for being jam-packed and chaotic with stuff. The artist once purchased a desk owned by Joan Collins as a gift for his husband.

Although there is an immediate pop sensibility to Leibowitz’s work, his forms look unrefined and homey, rather than sleek and precise. Incidentally, Leibowitz acknowledges Andy Warhol as being one of his greatest influences. Similarly, the recognition of, and reliance on, art history is apparent, yet Leibowitz’s art flows more from entertainment than conceptual art.

The ICA’s immense salon-style hang of wooden-panel paintings, framed lithographs and drawings, as well as cabinets loaded with series of crayon- and marker-on-ceramic objects, underlines the necessity of seeing Leibowitz’s work as a group. It is necessary to be engulfed in order for the artist’s words to really resonate.

Allie Biswas: You studied at various institutions before beginning your career as an artist. How informative were these educational experiences?

Cary Leibowitz: At Pratt and FIT [Fashion Institute of Technology, State University of New York], I was studying architecture and interior design. I was very frustrated. This was 1981 and my teachers were second- and third-generation modernists who weren’t very open to the postmodern movement that was growing. I think I was always looking for a mentor, a moral compass. This led me to fine art versus architecture. I didn’t know a lot about fine art, but I wanted to be thinking in a different way. The only influences from architecture school were Robert Venturi and Denise Scott Brown. Their ugly and ordinary [aesthetic] seemed to hit an indelible nerve for me. I am still devoted to them. 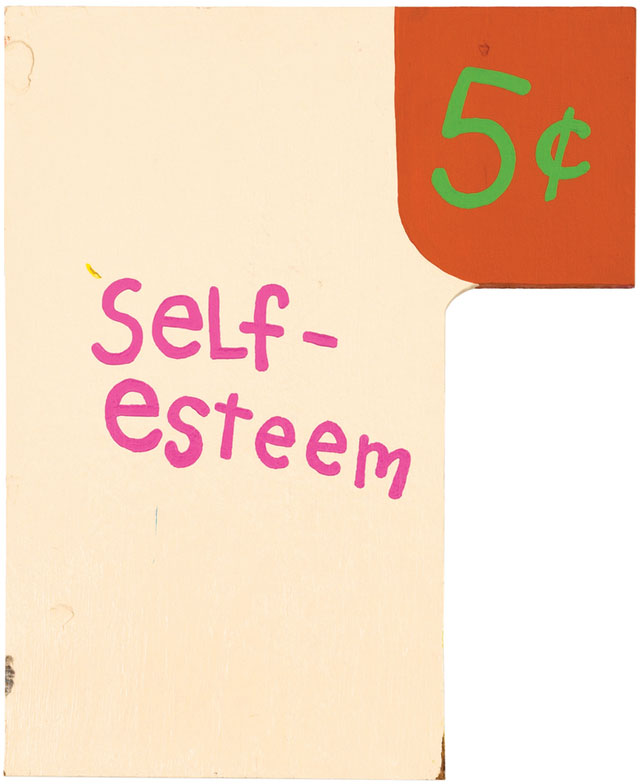 AB: What was it that drew you to using text in your work?

CL: Somehow I think the text grew out of an appreciation of signage.

AB: Although you spent time at two art schools in New York, you ended up completing a degree at the University of Kansas. What led you to that part of the country?

CL: I had a weird epiphany that I should go to the midwest. I had never been, but it seemed exotic. The fine arts school wasn’t too big and there were typical student rebellion moments, but the art history library and Spencer Museum of Art on campus were important to me. 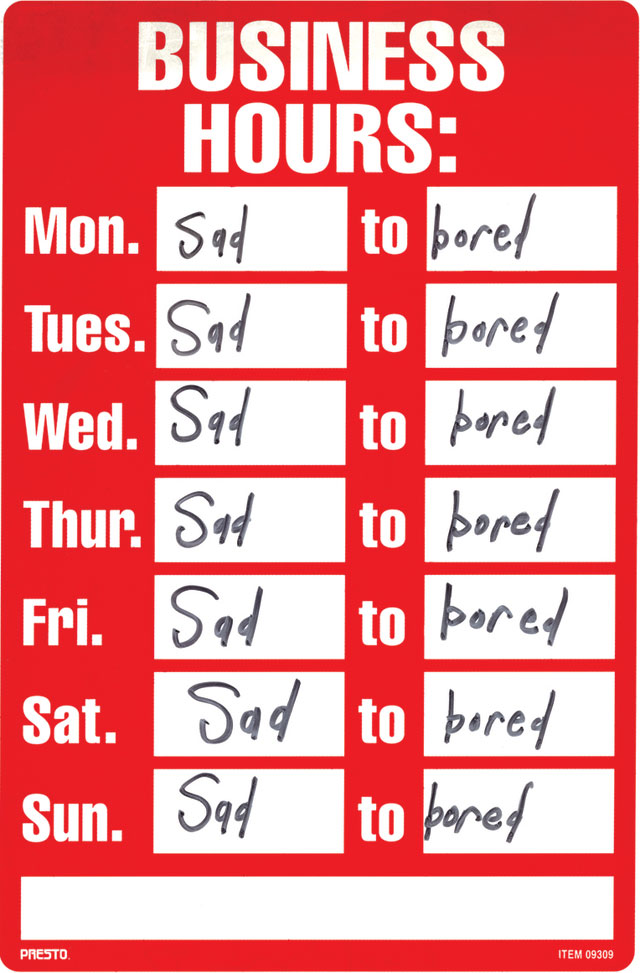 Cary Leibowitz. Sad to Bored, 1997. Marker on plastic sign, 12 x 8 in. Courtesy of the artist and INVISIBLE-EXPORTS.

AB: But you got your first break back on the east coast, in Boston, where you moved after graduating.

CL: After I graduated, in June 1987, my expectations were pretty low. I knew I would need a day job. Doug and Mike Starn were making art in Boston and I thought the city might be filled with other interesting artists. Every year, the Boston ICA had a “local” show, Boston Now.  A colleague at work told me about it and encouraged me to submit slides. I did, and was invited to be part of it. I was pretty surprised, but encouraged by the sheer “luck” of being included. There was another artist in the show who was also a big collector – Randolfo Rocha. He really pushed for Stefan Stux [founder of Stux Gallery in New York]  to take a look. Stefan then included me in a group show. The rest is history, as they say.

AB: That group show was called Stuttering, which opened in December 1990. That same year, there were two other exhibitions that examined ideas of failure and abjection – this category of “loser art” as it was called, which was beginning to emerge – Just Pathetic at Rosamund Felsen Gallery in Los Angeles and Work? Work in Progress? at the Andrea Rosen Gallery in New York. These exhibitions included artists such as Liz Larner, Sean Landers, Karen Kilimnik, Cady Noland and Laurie Parsons. Was there a sense of comradeship? 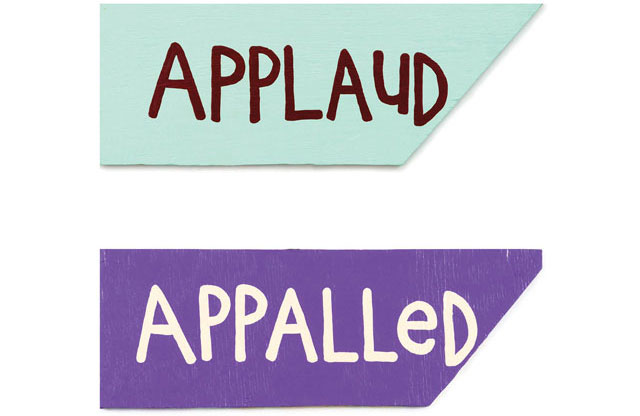 Cary Leibowitz. Applaud Appalled, 1990-91. Two panels, latex paint on wood, 10 x 27.5 and 8.75 x 25 in. Courtesy of the artist, INVISIBLE-EXPORTS, and the Institute of Contemporary Art at the University of Pennsylvania.

CL: I didn’t know I was part of a group until other people told me. I had always felt like an outsider/loser/outsider/outcast/loser – so why should this be any different? Up until then, most of the art I enjoyed was more rooted in art history and I didn’t feel I was smart enough to “outdo” that, so I had to stick to what I knew – whining and complaining.

AB: In terms of the wider context, your emergence in the early 90s coincided with the acknowledgement of Aids at this time. Much of your work relies on your own identity as a gay man. Did you ever consider your work as activist in nature?

CL: Tricky question for me. I try not to speak for others – it makes me cringe if I see myself doing so. I did a few specific pieces with Aids in mind. The one I like the most is a small teddy bear with a T-shirt on that says: “Someday I will make a cubist painting but right now it’s not important.” 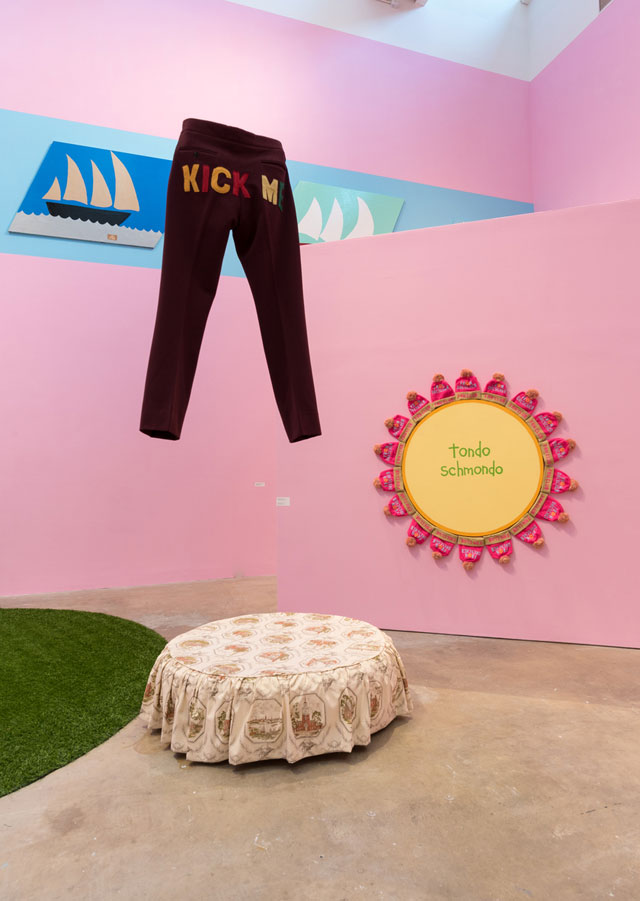 AB: How did your alter ego Candyass come into being?

CL: It goes back to my first job after college, in Boston, when I worked in a frame workshop. During a lunchbreak, a few of us gents were sitting around comparing notes on what derogatory names we were called as young boys. I was usually called something with a fairy in it. One friend said he was called Candyass. I had never heard that before and thought it was great. So I made him a painting that just said “candyass” on it, for his birthday. Then, for my birthday, he gave me a candyass rubber stamp that I started to use as an official signature. I wasn’t showing in exhibitions yet, so, for me, it was aesthetic and silly, but once I started showing, people asked what it was and it just sort of took over. Sometimes, I still use it as a crutch. It’s like referring to yourself in the third person – weird, but people let you get away with it.

AB: The name ended up fitting quite aptly with your aesthetic – the bright colours, the flamboyant quality.

CL: I hate my aesthetic. I wish I was delicate and elegant and smart and earth-shattering (laughs). But I am not. I have stopped questioning what I can or can’t do – I just need to keep working. If I stop what I am doing because I want it to look better or different, I might fail even more, and I won’t be able to start again.

• Cary Leibowitz: Museum Show is at the ICA Philadelphia until 25 March 2018. 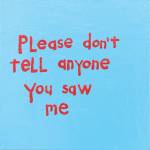