Dr Irene Barberis teaches and researches at Royal Melbourne Institute of Technology. She has recently collaborated in Chicago with Professor Karen Forbes of Edinburgh College of Art (ECA) in developing Metasenta, a vital, compact arts research hub, which functions internationally between universities and the wider arts and business communities. It does this by linking, networking and initiating high-quality and influential international art research projects, in an interdisciplinary context. It provides academics and artists as well as postgraduate students with immediate international opportunities. In the last two years, many Master of Art students have had international academic and arts experience through Metasenta projects, including invitations into important international symposiums, exhibitions, and contemporary high-end publications. Through this network artists have shared perspectives on the global future of the art academy. The unique quality of this art research hub is that its projects and outcomes happen very quickly - on an international scale.

Forbes is fortunate, through ECA, to have direct access in Chicago to a studio established within the John David Mooney Foundation building in Kinzie St. Barberis and Forbes had met initially in September 2006, and discussed a project with a very short time frame to bring postgraduate students to the studio in Chicago for March 2007. Forbes and Barberis wisely decided that, given sponsorship from RMIT, they would go ahead. Furthermore, the work in Chicago would, if appropriate, be documented by a full publication describing the activity and the output.

The book sets out a vision partly realised, recognising the potential impact of this form of research as it relates to art practice. Fuller development of the images and ideas has been ongoing since the dispersal from Chicago. It might be thought that such 'praxis' was inevitably ephemeral, but the opposite is the case - it is anticipated that concepts and ideas will percolate globally between individuals and institutions, for an open-ended time span, giving continuing recognition to the concepts emerged from the initial collaboration.

There is 'a permanent pedagogical model for research and art practice, albeit cross-pollinated by the activity of the artists themselves in collaboration and mutual exchange'. The beautiful black and white images of Emma Tolmie (accompanied by working drawings) vie with the open conceptual insertions in space of Ruth Fleishman. Brandt McCook focuses on the event of the fire stairs climbing the Mooney Foundation building, and the eventualities climaxing on the roofscape, a vertical expression related to the Russian Constructivists, without the vertigo. Karen Forbes (who has already contributed to the formulation of a scintillating visualisation of interior space in a tall building proposal (with architects RMJM) in Moscow, reveals her grasp of the open potential of all such spaces not yet realised in Chicago. Kenneth Watson transforms the periphery of his space in a continuing process of exploration. In contrast, Irene Barberis introduces a visionary impact of colour as medium. In collaboration with Karen Forbes the book illustrates how two such varied creative sensibilities merge.

An expedition into Milwaukee to visit Santiago Calatrava's art museum provided a superb piece of architecture, fundamentally nomadic in inspiration, which earthed the creative sensibilities of the group. Back 'home' in Chicago, the repose of Andre Liew's recumbent 'partial man', wrapped in foam, polystyrene, bricks and cardboard tubes, served to anchor the now soaring sensibilities of the group. Ruth Fleishman skilfully drew out hanging, sculptural images sourced from earlier Chicago history.

Irene Barberis' cruciform collage of clothing fabrics, garments, 'formed images and ideas in the mind, especially of the things never seen or directly experienced'. This powerful statement perhaps served to underpin also the promise of Metasenta for the future. Barberis' conceptual piece is represented close to the end of this book, dwarfing the artist and anchoring the sublime.

This book is a model for all such ventures into documentation by art students and teachers alike. The presentation is both informative and subliminal. It becomes an exemplar and also a tool for the art academic community to move forward from. Barberis and Forbes are to be congratulated for achieving so much in such a relatively short period of gestation. Time pressure can sometimes prove utterly destructive - or else it is catalytic, as it has been in this case. 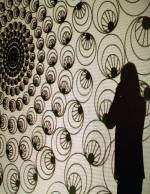