With cast-off cardboard and “show-card” colours

Bill Traylor: Drawings from the Collections of the High Museum of Art and the Montgomery Museum of Fine Arts

Since he was brought to public attention at the Corcoran Gallery in Washington DC with the 1982 exhibition Black Folk Art in America, 1930-1980, emancipated slave Bill Traylor (1854-1949) has become a star in the ranks of self-taught artists.

Despite modest means – discarded cardboard for his canvas, and pencil, charcoal and crayons jazzed up with “show-card” poster-paint colours – Traylor created an estimated 1,200–1,500 pictures between 1939 and 1942. Curators, gallery owners and collectors have recognised in Traylor’s disarmingly simple compositions a uniquely powerful expression of life in the post-civil war American south, while scholars have discovered a compelling narrative encoded in his idiosyncratic imagery.

Traylor’s fame was further enhanced in 1982 when the Montgomery Museum of Fine Arts in Alabama and the High Museum of Art in Atlanta, Georgia, each acquired 30 of his pictures from Charles Shannon (1914-96). In 1939, Shannon, then a young Montgomery artist captivated by jazz and blues music and the soulful quality of southern black culture, discovered Traylor drawing on a Montgomery street corner. From then on Shannon championed the elderly black artist, nurturing his talent with art supplies, and saving much of his work from loss or destruction. The pictures Shannon gave to the Montgomery Museum and sold to the High Museum are the basis of an exhibition at the American Folk Art Museum (AFAM) in Manhattan until 22 September.1

Traylor constructed human figures and architectural elements with basic geometric shapes. A master of economy, he had an intuitive, particular sense of proportion and balance. For many viewers, the overall effect of seeing his pictures, especially in a large group, is likely to be a combination of delight and curiosity. Even when Shannon gave him better materials, Traylor preferred to use cardboard from discarded packaging and signboards that were worse for the wear. Apparently, he appreciated the imperfections, which impart character and authenticity to the works. From the tense, suspended animation in his “exciting events” to the benign or ferocious personalities of his animals, Traylor’s drawings engage the eye in everyday dramas he saw in the city or on the plantation where he was born and later farmed as a sharecropper.

While it is sobering to realise the harsh physical and economic circumstances Traylor endured at a time when Jim Crow laws and lynchings shadowed the lives of blacks in the Depression-era south, the positive energy of Traylor’s art suggests he may have achieved a sense of mastery, or control, from making pictures. Some of his admirers have written about a mournful but defiant attitude in his art, linking it to traditional African music, jazz and the blues.2 One can imagine the scene on Montgomery’s Monroe Street, where Traylor sat on a box, drawing, surrounded by completed pictures hanging on lines or on a fence. Sometimes he would sell pictures; at other times, he would give them away.

As a slave, Traylor lived a mainly unrecorded life. Scholars have pieced together the outlines of his biography from census data and oral histories and reconciled some conflicting details. He spent most of his life on land outside the town of Benton. After his children left and the last of the family who owned the plantation died, Traylor travelled about 40 miles south to Montgomery. In his 80s, he lived on the streets in a thriving black community of small shops and businesses.

Visitors who have the opportunity to see this travelling exhibit at AFAM will be rewarded with a concurrent display, Traylor in Motion: Wonders from New York Collections, developed by AFAM’s chief curator and director of exhibitions, Stacy Hollander, and curator of art of the self-taught and Art Brut, Dr Valérie Rousseau. Traylor in Motion offers an intriguing perspective on the artist’s pictures as cinematic renderings of observations and memories. Consisting of some of his most accomplished works acquired by major collectors, including the Louis-Dreyfus family and Jerry and Susan Lauren, the exhibit spotlights Traylor’s compositional finesse with repeating visual motifs such as pointing and gesturing figures and patterns of movement.

The childlike spontaneity of Traylor’s drawings makes these shows a good choice for introducing children to a self-taught artist. His quirky animals will charm young people, who are bound to be fascinated with the cartoon-like antics of his human figures. To give context to Traylor’s art, parents might follow up with two excellent picture books: Deep Blues: Bill Traylor, Self-Taught Artist by Mary E Lyons and It Jes’ Happened: When Bill Traylor Started to Drawby Don Tate, illustrated by R Gregory Christie.

Although smaller than the building AFAM occupied from 2001 to 2011 on 53rd Street next to MoMA, the museum’s current home in Lincoln Square, near Lincoln Center and Columbus Circle, is warm, inviting and accessible by multiple train and bus lines.4 Having organised many exhibits of uncommon beauty – the outstanding Martín Ramírez (2007) and The Seduction of Light: Ammi Phillips/Mark Rothko Compositions in Pink, Green and Red (2009) among them –AFAM should be considered one of New York City’s treasures.
A recent grant from the Henry Luce Foundation will enable the museum to bring more than 100 works by self-taught artists to audiences across the country in a travelling exhibition opening in New York in May 2014. This is good news because, judging from Traylor’s example, art made by the self-taught, even with humble materials such as cardboard and poster paints, can enrich, expand and, perhaps, alter our understanding of American history and culture.

Notes
1. Exhibition schedule: High Museum of Art, Atlanta (5 February to 15 April 2012); Frist Center for the Visual Arts, Nashville (25 May to 3 September 2012); Mingei International Museum, San Diego (9 February to 12 May 2013); American Folk Art Museum, New York (11 June to 22 September 2013). AFAM will hold a Traylor symposium on 16 September 2013.
2. See Phil Patton’s catalogue essay for a 1997 Traylor exhibit held at Hirschl & Adler Modern and the Carl Hammer Gallery for an eloquent meditation on Traylor’s “visual blues”: http://www.philpatton.com/traylor.html
3. Bill Traylor: Drawings from the Collections of the High Museum of Art and the Montgomery Museum of Fine Arts by Susan Crawley, Leslie Paisley, Margaret Lynne Ausfeld, Fred Barron and Jeffrey Wolf is published by Prestel, 2012, price US$29.95/UK£19.99. The 104-page catalogue contains 95 colour illustrations.
4. For New York Times coverage of the challenges faced by AFAM since it defaulted on its building loan in 2011 and its resurgence, see http://www.nytimes.com/2013/04/03/arts/design/american-folk-art-museum-puts-down-healthier-roots.html?pagewanted=all 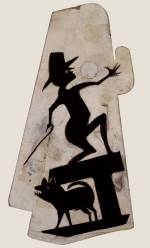 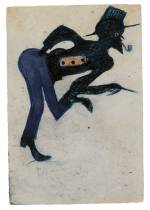