Ralph Fasanella: Lest We Forget

Ralph Fasanella: Lest We Forget

Ralph Fasanella’s paintings, on view at the American Folk Art Museum, record US history from the point of view of a life-long New Yorker, the son of Italian immigrants, a union organiser whose passion was the working class and social justice

“The day I stop protesting, which to me is living, Ralph is finished. Dead. That’s it.”1 These words sum up Ralph Fasanella’s attitude toward his life and his art. The son of Italian immigrants, a worker, union organiser and artist, Fasanella cared about the working class and social justice above all else. Art came to his life as continuation of his labour: he started painting when he was 31, enthusiastically discovering that he had an aptitude for drawing, the application of colour, and compositional arrangements. He painted things he knew well – the city in which he lived, his family, his fellow-workers, political events. For most of his life, he held a regular job to earn a living, and it was this work and the environment in which he lived, not art alone, that sustained his creative drive. Fasanella was a tough-talking self-starter who despised exclusivity and scoffed at the idea of artistic professionalism: “Fuck you and Rembrandt! My name is Ralph.”2

This attitude produced art called “primitive” and at one point gained the artist a reputation of being “the best primitive painter since Grandma Moses”, as well as a “New York phenomenon”.3 Now we have a chance to see an exhibition of this quintessential New Yorker at the American Folk Art Museum. Dedicated to the 100th anniversary of Fasanella’s birth, the exhibition includes 17 paintings, eight drawings, several photographs and documents covering the entire span of the artist’s career in a selective, but comprehensive manner. The show features paintings from every decade of his productive life, which lasted from 1945 to 1997. Shortly after he first picked up a brush, Fasanella created a few paintings about his native city, one of which, Pie in the Sky (1947), is included in the exhibition. This work is striking in its simplicity and force. The subject is simple: two tenement buildings with a church spire in the middle. The composition is also simple: the picture plane is divided vertically by a street and the church, and horizontally by two roof lines. This basic structure breeds a host of more or less regular parallelograms, which show us cross-sections of people’s apartments, a large advertisement covering an entire wall of a building, rows of lit windows facing each other across the divide of the street, and laundry drying on rooftops. The forceful impact of the image comes from its stark colour scheme in combination with a bold perspectival inversion. The palette is composed of dark-red and yellow hues. The central motif of two buildings facing each other is painted from a bird’s-eye perspective, reminiscent of Joseph Stella’s The Brooklyn Bridge: Variation on an Old Theme (1939). This dizzying point of view clashes both with the flatness of the frontal plane depicting the front walls of the buildings, as well as with the rooftops, which appear at a slight angle. The “pie in the sky” of the title is the purplish glittery area hovering above the rooftops, intersected in the middle by the cross of the church spire. With its bright colours and Christmassy paraphernalia, it contrasts sharply with the darkness of the city tenements below. Ingeniously, Fasanella inserted abstract areas of colour – on the rooftops and the frontal plane on the right – into an otherwise quite legible succession of images. These patches are ambiguous in that they may designate various objects – brick walls, floors, carpets – or may not. They reveal to the viewer the magical nature of paint, its ability to work our imagination in such a way that we begin seeing things in places where there are none.

In its unapologetic “primitivism” and emphatic contrast of varying points of view, Pie in the Sky recalls at once a quilt and a Byzantine icon. Fasanella’s affinity with the handiwork of the American folk art tradition is traceable in Sam’s Dream (1948), another early painting included in the show. Here, the irrationality and desirous nature of a dream is conveyed by a juxtaposition of seemingly disparate images of private, interior spaces that the artist’s magic opens up to our view in an enticing depiction of a dreamy suburban landscape. Christian themes become pronounced in Fasanella’s paintings of his family: numerous versions of Iceman Crucified, three of which are included in the exhibition, and Family Supper (1972), the painting of his mother as a family matriarch. In Iceman Crucified, the artist portrays his father as a saint crucified by hard labour, replicating the iconic image of Jesus of Nazareth. In all of the paintings with this title, his father is nailed to a cross, usually in front of his icebox, in various urban settings. Fasanella knew first-hand the hardships his father endured to make a living and support his family, because, as a boy, he used to help Giuseppe Fasanella in his daily rounds delivering ice to neighbourhood families. In Iceman Crucified #4, the title of the exhibition, “Lest We Forget,” figures on the plaque attached to the top of the cross, in place of the usual “INRI”. The phrase and the painting epitomise the artist’s admiration before the notion of sacrifice and physical suffering. Family Supper also recalls Christian ideals and the tradition of icon painting, albeit in a less direct manner. Here, Fasanella’s mother, Ginevra, is taking centre stage in front of the cross, gesturing protectively towards children huddled around her. Below her is a family sitting around a dinner table, sharing a meal. The scene is set in a city apartment, a setting at once intimate and universal. As in a narrative icon, the central image is framed by multiple smaller scenes, describing life beyond the walls of the chosen abode.

In later years, as Fasanella became more politically outspoken in his art, references to archetypal American folk art forms and Catholicism merged into large, panoramic compositions recalling the authority of the mural tradition for socially conscious modern painters. As someone who dedicated his life to organising unions and improving the lot of the working man, Fasanella was determined to bring his art to the masses. His large “mural” paintings were intended for display in public places that were not specifically designed for art, such as union halls, for example. They were either cityscapes – such as his magnificent New York City (1957), picked by mayor John Lindsay in 1972 for display in the city hall – or, more often, elaborate pictorial scenes that referred to political events of the day. The exhibition holds many of these ambitious panels, among them McCarthy’s Press (1958), The Rosenberg’s: Grey Day (1963); American Tragedy (1964), and Modern Times (1966). In these panoramic works, Fasanella criticices the direction of American politics during Joseph McCarthy’s witch-hunt in the 50s and the conservative backlash against the civil rights movement in the 1960s, which, for him, was epitomised by the execution of Ethel and Julius Rosenberg and John F Kennedy’s assassination. In Modern Times, he comments on the 1965 papal visit to New York and the pope’s public appearance at Yankee Stadium. These complex multi-figure compositions are narrative in a sense that they tell a story of a particular event. In them, as in Family Supper, the principal subject takes centre stage with many related mini-stories painted around it as crowd scenes or illustrations of actions.
Apart from paintings, large and small, the exhibition features drawings and documents, allowing the viewer to examine the artist’s working process and to become familiar with facts from his public life.

Fasanella’s drawings are, indeed, fascinating. Rough, but vivid and attentive to detail, they capture a person’s mood and likeness with an apparent ease, which comes with patient work and careful observation of his subjects. All the drawings are done on household paper – newspaper or paper towels – pointing to the importance that the physical nature of materials had for the artist. The exhibition makes us realise that there was nothing accidental about Fasanella’s art or his success. Fasanella, worker and painter, knew his place in life and made a record of it, which we can witness. 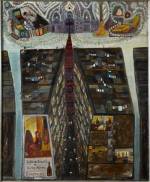 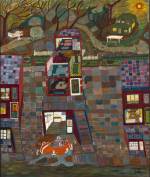