Fact and fiction overlap in this documentary-style film, as mainly black and LGBT characters use dance as a way to assert themselves in a country whose president is openly homophobic 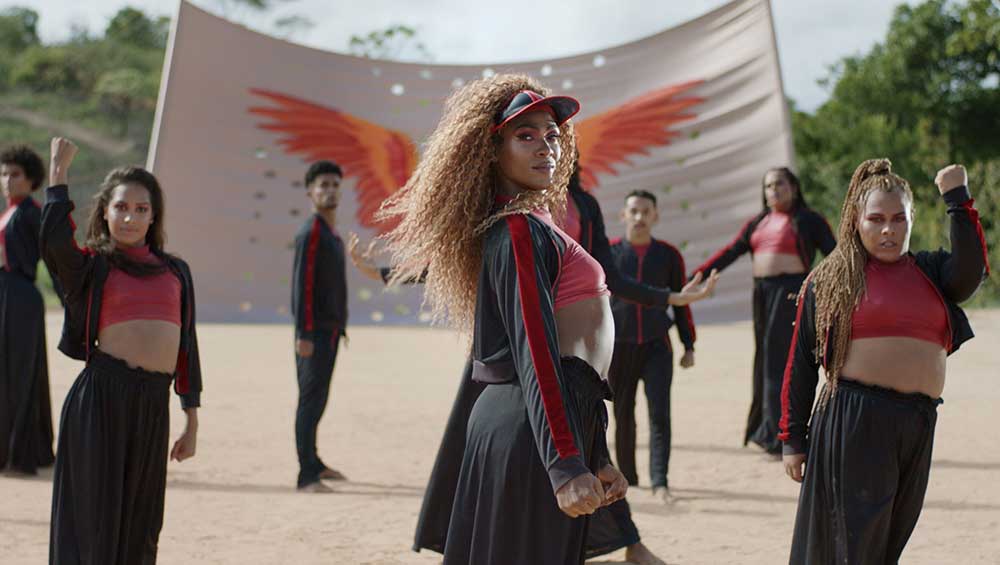 The characters in Swinguerra are not the first that come to mind when you think of Brazilian people. Yet, they were the face of Brazil during the Venice Biennale 2019 – ironically, the year Jair Bolsonaro, a far-right, openly homophobic president, came to power in the country with the deadliest rates for murder of transgender people. They are almost all black, and almost all are gender queer. They come from the peripheries of the Brazilian city of Recife. Swinguerra, a video installation by the duo comprising the Brazilian photographer and scriptwriter Bárbara Wagner and the German-born film-maker Benjamin de Burca, is now on at Maison Européenne de la Photographie (MEP) in Paris. 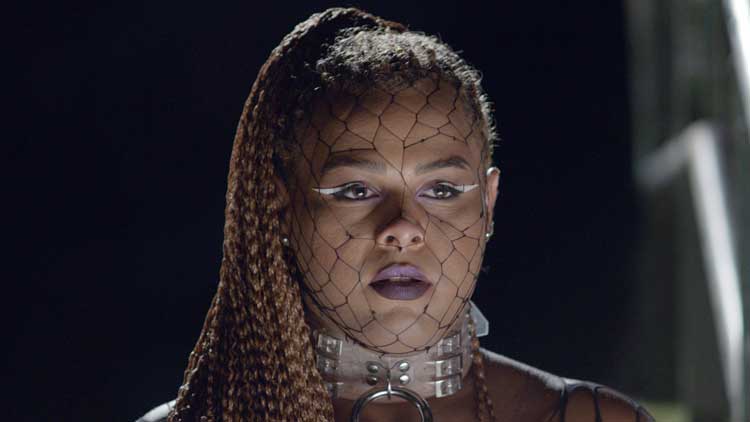 The visitor will find no fixed categories, no common place, in this fictionalised documentary turned into a piece of art in a museum dedicated to photography. The installation consists of two video screens forming a V-like angle that resembles the chevron formation the dancers display during one presentation in the film. The projections at times show different shots of the same scene, but the visitors will hardly notice it, as, positioned in the middle, they will necessarily have their backs to one of them. In this battle, they are forced to take sides.

The subject of the film is an emerging phenomenon among marginalised youths aged between 15 to 20 from the metropolitan region of Recife, in north-eastern Brazil, in which dance groups spend a year intensively rehearsing dance routines at a sports arena to prepare for competitions that are highly competitive but could bring them money and social recognition. The film installation intends to show the effort they dedicate to preparing for the grandiose spectacle. 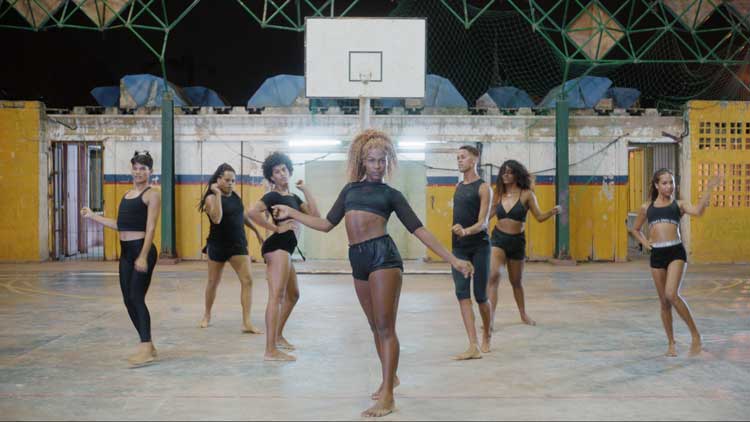 The film follows these characters from the creation of the synced choreographies until the final performances – and, no less important, shows the doubts, difficulties, flirtations and intrigues that arise during the breaks in rehearsals.

This is, of course, just one possible reading. The chronological construction is not entirely given. As the film plays in a loop, the visitor will almost certainly arrive partway through it and, after the whole sequence, the chances are that they will still be in doubt about where it really begins. It doesn’t really matter though.

Except for the head-coach’s commands during the rehearsals, the only words we hear are not spoken but sung. Different styles of popular music make up a soundtrack of self-affirmation and sometimes highly explicit sex. Either graphic or humorous lyrics, subtitled in French for the exhibition, describe, for example, anal sex scenes or intercourse in a car with the air conditioner on, with song titles such as I Am a Cannibal and Tail on the Ground. Likewise, fast-paced moves often simulate sex or the use of guns. Despite some heterosexual and male-dominant lyrics, the movement of the dancers’ bodies strongly contradict what Wagner and De Burca refer to as “the macho-toxic and neo-fascist ideology espoused by Bolsonaro in the first instance of his predictably disastrous moment in governance”. 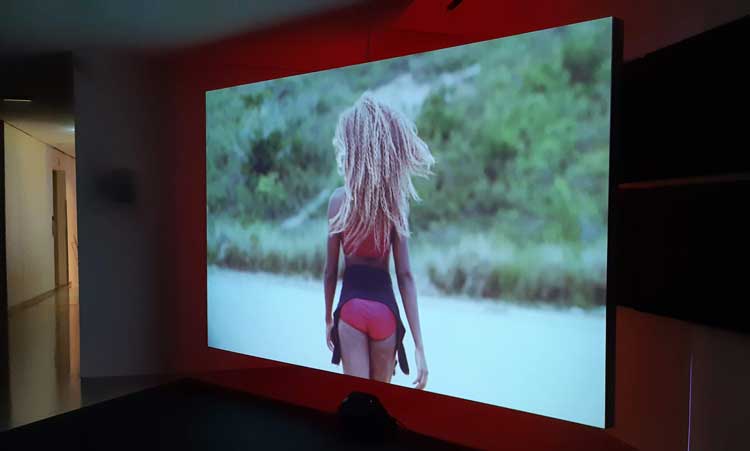 An otherwise lyrical scene symbolises this encounter between old and new music styles. At the end of a presentation by one of the groups, the main dancer observes an old lady, a street seller, uttering a hypnotic, longing chant from the stands. Wagner and De Burca explain: “In Recife, one can hear her voice from many streets away, where her singing serves as a powerful incantation about life, love and respect … In symbolic terms, Kinha [the old lady] is a goddess – the eyes of history – the final observer of the final dance sequence in the film … Her song breaks the fourth wall and addresses the viewer, asking them to take time and consider not just their viewpoints, but the place from which their point of view stems in relation to what they have just observed.”

The portrayed rhythms include three types of music and dance – swingueira (which means something like “with a lot of swing” in Portuguese), brega (bad taste) funk and passinho do maloca (thug’s small pace) – all of which in a way update traditional cultural phenomena such as samba-reggae, reggaeton, dancehall dance and funk with influences from today’s pop and electronic music. The title of the film, which derives from swingueira, is a pun created by De Burca by combining the name of the music style and the word guerra, Portuguese for war. Thus, the name describes the battle among the dance groups, that is, a swing war – a West Side Story of sorts. 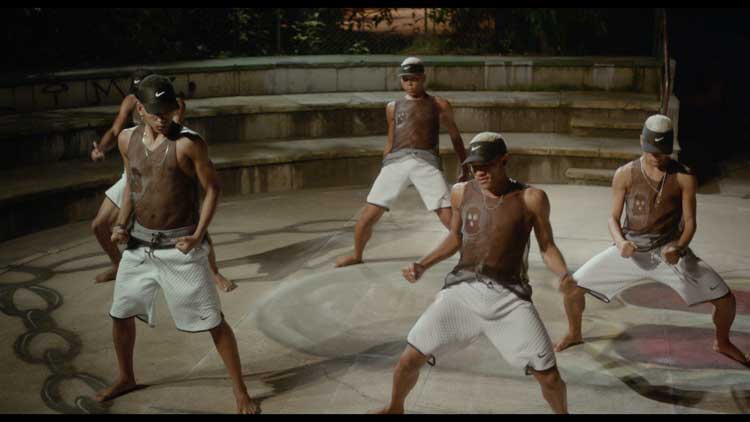 The dances are performed by three real groups, Cia Extremo, Grupo La Mafia and Bonde do Passinho/As do Passinho SA. They dress in (petite) outfits in black, white or red, all appropriate for the region’s all-year-round hot weather, complete with exuberant hair styles and makeup. The rivalry also arises on another level, between two transgender dancers within the La Mafia group. Clara Santos, who performs a secondary role, dreams of joining Cia Extremo, where she would be able to have a more prominent position. Seemingly jealous of Eduarda Lemos’s lead role in Cia Extremo and the film, she ends up changing sides.1 Indeed, Lemos, who also featured in a previous film by Wagner and De Burca, is the thread of the story. She is a Beyoncé-like character and extravagantly beautiful, and a large portrait of her greets visitors at the entrance to the exhibition.

As much as the film is a register of tough, almost military-like training, it is also a creation. The dancers play themselves, but they are also role-playing. Documentary and fiction overlap, something the authors have identified as a fictional ethnography. The camera is not alien to the dancers. Indeed, it is very familiar within their universe of self-promotion on social media. It is there that they affirm themselves and create a circuit outside mainstream media.

As part of Wagner and De Burca’s methodology, the groups of MCs, dancers and choreographers are co-authors in the film. The duo seems to put into practice a method developed by the Brazilian educator Paulo Freire, later extended by the Portuguese sociologist Boaventura de Sousa Santos, that advocates that all research should be made with its subject, not about it. “In our films, there is both ‘about’ and ‘with’ synonymously, in that the musical/dance sequences of the portrayed subjects rely on the professionality of their artistic expressiveness, while the narrative sequences are informed by the real and daily life experiences happening during the development of the work … One must enter the psychological state of the portrayed, and this can only truly be done ‘with’ the subject,” say Wagner and De Burca.

This methodology springs from Wagner’s training as a journalist and De Burca’s background in the visual arts, that is, a mix of street and atelier world views – or, as they put it, of life and art, the feelings of urgency and contemplation. This particularity of their work gained traction with a partnership with a third element: Pedro Sotero, the cinematographer at Swinguerra as well as at internationally awarded Brazilian movies such as Neighbouring Sounds (2012) and Aquarius (2016). Sotero’s ability completed the special way in which they “instigate auto-performative theatre-to-camera with singers, dancers and musicians”, something “between moving-image-based art installations in museums and galleries, short film festivals in cinemas around the world, and also on television beamed into the home,” say the duo.

Wagner and De Burca had previously made films about other popular music genres in Brazil, such as frevo, Faz que Vai (Set to Go, 2015), and gospel, Terremoto Santo (Holy Tremor, 2017). Like Sotero, they challenge pre-established social, gender and race stereotypes, while showing resistance from generally marginalised populations that, nonetheless, feel and act powerfully against the odds. This is their underlying political message. Power is indeed what the groups want to see represented in their dances and on screen. This willingness may explain the presence of a military salute at the very beginning (or end) of the film, just before the grandiose, eye-dropping presentation (by chance?) filmed in a military camp where a historical battle took place in the 17th century.

In a place one expects to be eminently visual, the music goes up the stairs and spreads over the other exhibition rooms. The sound is contagious. Occupying the space called Studio at the MEP, “devoted to emergent artists”, Swinguerra shares the museum season with Cameroonian photographer Samuel Fosso, whose retrospective along MEP’s main galleries also covers black LGBT topics.

This is the first time Swinguerra has been shown in Paris. Apart from being shown at the 58th Venice Biennale, it has shown at the Temple Bar Gallery, in Dublin, and the Berlinische Galerie, Berlin. It is also currently on view at the Kunsthall Stavanger, Norway.

1. Notes on the process of Swinguerra and on other duels at the margins of the Brazilian Venice. In: The films of Barbara Wagner & Benjamin de Burca by Hélio Menezes. Toronto: The Art Gallery of York University, 2019. 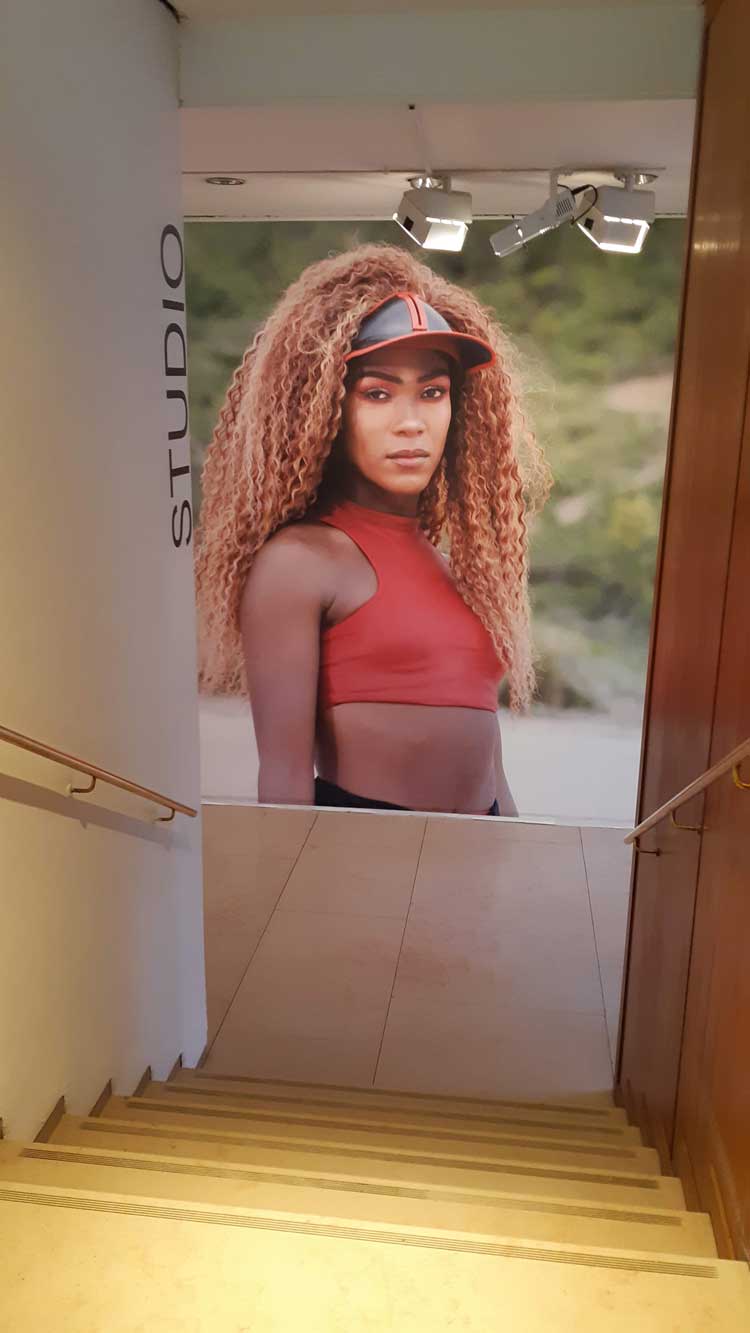