With its focus on the aerial image, At Altitude puts our terrestrial world into perspective with a broad range of works. It’s intriguing but, somehow, it misses the mark

Hidden in a dark corner of At Altitude is a little book left open at a strange illustration. It is a circular image of oddly shaped clouds and, in the centre, another perfect circle acts as a window to the ground below. This modest engraving, published in 1786, is the first aerial view of the Earth and it has the feeling of an adventure with a Jules Verne flavour. The author of this book – one Thomas Baldwin – took a balloon flight over Chester in England in September 1785 (the very first balloon flight was in Paris in 1783) and the resulting volume, entitled Airopaidia, is a thorough, almost 400-page, account of that single trip. The day must have made quite an impression on Baldwin, who, with a wonderfully eccentric 18th-century spirit of discovery, captured every detail, including a list of the things he took with him, which included a bottle of brandy and “pepper, salt, ginger; to try the effects of tastes, which have said to become insipid on the peak of Tenerife”. 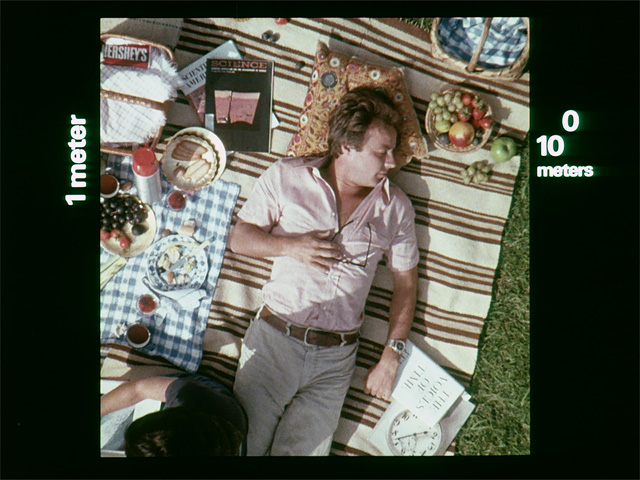 Our progress since has been astounding. Little is made of space travel here, save Charles and Ray Eames’ nine-minute video Powers of Ten (1977), which takes us on a journey, starting with a couple having a picnic on a lakeside in Chicago, right out to the furthest reaches of the known universe and back again, closer and closer, until we reach the level of neutrons contained within the cells on the back of the man’s hand. It’s fun and a little like a school educational video. But there are far more serious themes at work here, too. 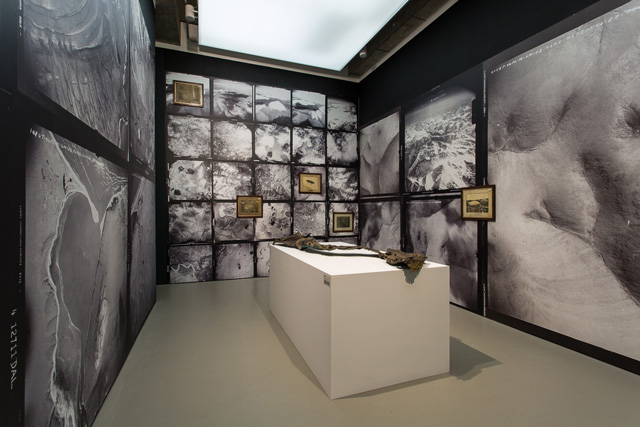 The first room is plastered with photographs taken from airships surveying Alaska during the cold war and there are a couple of paintings by Christopher RW Nevinson (1889-1946) – which seem out of place in a room full of modern works – which show planes battling in the skies during the first world war. We move from violence and peril to the much more serene work of Tacita Dean, whose short film A Bag of Air (1995), shot on 16mm black-and-white film, takes us in a hot-air balloon flight over a bucolic landscape. She captures air so that it “might be distilled and prepared” to produce “an oil of gold”. It is a typically poetic work that combines a sort of naive childhood wonder with a mythic imagination. 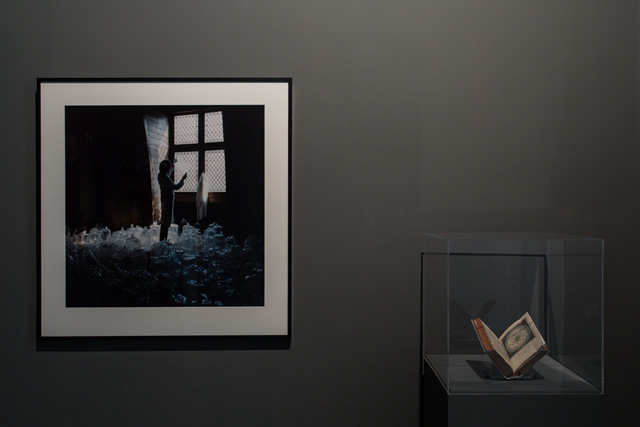 Iraqi-born Jananne Al-Ani’s Shadow Sites I (2010) is a video of an aerial flight over Jordan and is named after the outlines of archaeological structures, which are best seen from the air when the sun is at a certain point in the sky. But mixed in with these ancient structures are the scars of farming, mining and military activity. Humans have marked the ancient deserts for millennia, like ants making their homes in the dirt. From above, our activities seem remote and the concept of the individual changes. Very few of us live as hermits and the physical ways in which we connect ourselves to each other, the tracks and highways, the telegraph poles and train lines are best observed from above, from an extra-terrestrial distance. From such a height, our endeavours are put in perspective and time is contracted, with the new and the old visible together to form a palimpsest of brick and clay. Al-Ani’s images could be of Iraq, Afghanistan or Syria, and when I first saw the footage, I assumed it was filmed from a military plane. The images seem to assume the perspective of an invasive force, echoing news footage of Taliban sites destroyed from above in a cloud of dust. Such a lofty perspective carries with it a pervading sense of threat. 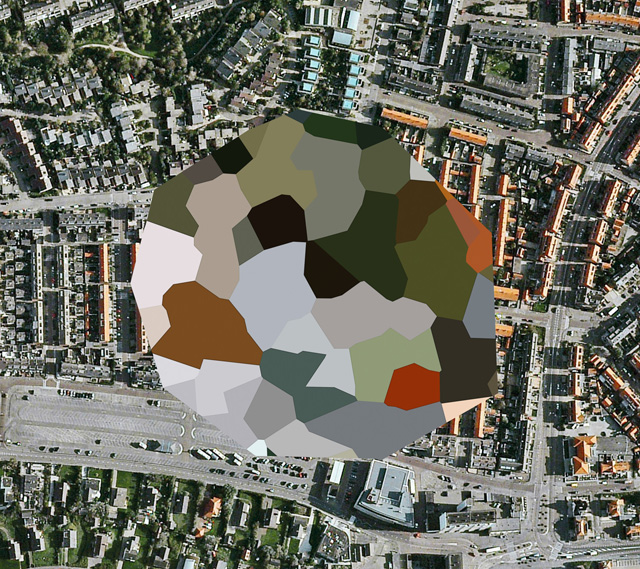 That aerial flight has given mankind the ability to watch over each other is an issue explored by Mishka Henner. In 2005, Google made its satellite images public and, suddenly, anyone could view the Earth from above. But this newfound visibility was not embraced by governments, who placed pressure on Google to cover sensitive sites. Surprisingly, the Dutch were one of the most enthusiastic nations when it came to censoring these aerial photos, using patches of large, colourful polygons to disguise the ground beneath. Henner’s images show these obscured locales in the otherwise everyday landscapes of the Netherlands, covering royal palaces, fuel depots and military installations with an almost playful candour.

At Altitude is quite a small exhibition, and, while interesting, lacks a certain something. Perhaps it is the hotchpotch nature of the display; perhaps it is that no one thing is explored in any depth. Whatever the reason, the exhibition is well complemented by Omer Fast’s engrossing film in the gallery next door: 5,000 Feet is the Best (2011) explores drone warfare through a series of dramatised interviews that the artist conducted with a former drone operator, who now works as a security guard in Las Vegas. What is real and what is imagined is left ambiguous, but this film drives home preconceptions and prejudices, playing with us with its disorientating narratives and mixing of genres. It cleverly brings this remote weapon to our doorstep, using aerial shots of typically American towns to remove the cultural and geographical distance that comes with fighting a war from thousands of miles away. Parallels are drawn with playing a computer game, but at 5,000 feet everything is visible, down to the colour of a person’s shoes. It also examines the effect that operating such a craft has on the “pilot”, who, while not in the drone, claims to experience the traumas of the battlefield, if not physically, then mentally.