Artist as Peacemaker - Beyond Conflict

Artist as Peacemaker - Beyond Conflict

Beyond Conflict is an exhibition of 24 Scottish artists, which was conceived as a cultural dialogue between Scotland and Islam, in the wake of 11 September.

Beyond Conflict is a natural extension of the work of Richard Demarco in Edinburgh; he has spent his life dedicated to art with a social dimension and to Scotland's place in Europe. The exhibition was a response to the atrocity of 11 September, and in relation to Scotland's participation in the Commonwealth Games earlier this year in Manchester. It was conceived as a cultural dimension to the Games.

Allan Alstead in his capacity as Chef de Mission of the Scottish Team approached Demarco for a cultural input; he suggested that there should be an artistic response to September 11. Alstead is also the Chairman of Aid International and Mercy Corps Scotland. In his introduction to Beyond Conflict, he writes, 'In Aid International and for the work of Mercy Corps around the world the task we have set ourselves is 'to alleviate suffering, poverty and oppression by helping people all over the world build secure, productive and just communities … My vision was that from the exhibition and the tragedy of 9/11 something good and strong might begin to grow which might help the understanding between Scottish and Muslim cultures, which we might use in our work around the world'.1

Demarco suggested to the 24 artists chosen to take part in the project that they should find as their inspiration an artwork or artefact from the National Museums of Scotland, 'which reveal the many and varied points of interface between the cultures of Islam and Scotland'. The preparedness of each artist to make a small artwork, measuring five inches square, resulted in an exhibition which did indeed reveal new and enlightened aspects of a shared cultural heritage which contributes significantly to our understanding of European civilization'.2 The restriction on size has made for a very portable exhibition which has recently travelled to Brussels and will next year travel further afield.

The exhibition was first shown in April 2002 in collaboration with Blink Red, Scotland's first online contemporary art gallery, and Apex Hotels in Edinburgh. An expanded form involving Scottish art students and school children was presented in Manchester to coincide with the Commonwealth Games. The Edinburgh Festival was the third venue. Two other exhibitions on related themes were also shown there in a collaborative vein; Poland's International Artists' Museum showed the work of over 200 artists including a significant number from Israel and Palestine. The role of artist as peacemaker was presented. Generous support from the Apex Hotels and the Merhav Group made the joint venture possible.

In a speech given to 250 members of the European Parliament in Edinburgh in June, Demarco chose as his subject, The new media: a challenge to education and culture in Europe. In his speech, Demarco championed Joseph Beuys — an artist he first brought to Scotland in 1970 and whose work and ethos have been central to his own philosophy. Demarco stated, Beuys 'believed that art exists to help to solve the political and economic problems which sow the seeds of war. He made a controversial statement which must ring true today that "Art = Wealth", not in monetary terms but in the sense of wellbeing or "health". He personified the spirit of a German survivor of the war that had caused Europe to endure the ignominy of the Berlin Wall. He used his war experiences and, indeed, his war wounds to make his art demonstrate his belief that art has therapeutic value for the individual and for society. He believed that politicians and artists should take heart from the fact that "New beginnings are in the offing", that new ideas are born in the space beyond the viewable and verifiable horizon.3

Demarco has taken Beyond Conflict to Brussels where it was felt it would, 'add a cultural dimension to the mini-plenary session of the European Parliament'. A second exhibition by Irish photographer Derek Spiers, who accompanied Mary Banotti, Irish MEP to Afghanistan is also taking place.

Demarco has long been involved in the Edinburgh Festival and has played a pivotal role in bringing international artists to Edinburgh. He points out that the Festival came about at the end of the Second World War — its founders wanted to celebrate the hard-won victory and saw that the arts should play a central role in the healing process that would follow. The existence of art was vital in the re-creation of a world 'beyond conflict'. Professor Emeritus Peter Selz, University of California, Berkeley and author of numerous books and articles on 20th-century art, has recognised Demarco's vision and organisational capacity, 'At a time when the President of the United States of America and the Prime Minister of the United Kingdom stated their intention of a war of aggression, Richard Demarco organised an exhibition of conciliation for the coming together of East and West toward solidarity and peace … The result was a truly remarkable range of images - abstract, figurative, sketchy, carefully executed, heraldic, alarming as well as celebratory of the coming together of disparate cultures'.4

In the explanatory text to accompany his image in the catalogue, artist John Busby states, 'In my painting I have sought to combine symbols of faith and hope from Islam and Christianity. In the background is a simple incised cross from a gravestone at Castle Donnan, carved in 1000 AD to represent the physical cost of redemption from sin made for the world by Jesus. From Islam is order and perfection represented by geometry - three circles within a whole or greater circle springing from a single point of unity. Within the lower circle, a square representing the elements of earth, air, fire and water. The triangle in the centre circle represents the threefold nature of man's consciousness - the knower; the known; the knowing. The hexagon above is the symbol of Heaven - of perfection. The rose and the phoenix are from richly embroidered robes from 17th century Turkey. Both represent the joys of Paradise. On a silver bowl from Armenia is the figure of Christ, the Lamb of God, bearing the flag of victory over death. A life laid down, not in order to kill enemies, but to bring life to all "Agnus Dei qui tollis peccata mundi"'.5

Marion Leven chose from the National Galleries what she described as 'peoples' art': a 12th century scarf from Egypt and a 12th century stone grave-marker from Scotland. 'These two artefacts', she explains, 'are people's art, born from the creativeness that should make us desire peace'.6

Will Maclean's painting is not characteristic of his oeuvre (see review on this website). Here he chooses the image of the horse, 'In the east, a delicate and patterned image - in the west, a rough cut image of a horse and rider'.7 His image is neither Celtic or Middle Eastern in appearance, rather he implies centuries of human experience common to both cultures.

George Donald's acrobats in kilts, leaping through hoops was inspired by an Iranian metal box dated 1707. The date happens to be the date of the Act of the Union between Scottish and English Parliaments. Donald's interest in Iran well precedes this project; he travelled there as a student in the 1960s, and then again in early 2002. He explains how his image developed, 'The tiny box contains no less than 14 medallion-like images gracefully engraved into the brass surface and surrounded by the tiny scrolled patterns and knots, much like Celtic manuscript decoration.8

The 14 images represent aspects of human behaviour: justice, learning, and sport. In one image two men dance with a hare. Donald continues, 'They are at once comical and grave. Are they engaged in play, dance, or ritual? Man and Nature engaged in a sensual sarabade, a life-affirming Jug or Strathspey. I have set this curious ensemble tumbling around and within that wonderful linear poem of a goose, engraved over 1,500 years ago into a slab of sandstone in north-east Scotland. Its crisp intaglio and elegant pose is a wonder of pictorial economy, and complements the flowing lines of the Persian engraver'.9

A dialogue with art of the past is an essential part of the creative process. In 2000, the National Gallery in London held an exhibition entitled Encounters, where 24 contemporary artists of international stature were invited to choose a work of art in the famous collection as a starting point for a work of art or series of works. Beyond Conflict used a similar model to stimulate a visual dialogue between the cultures of Islam and Scotland, between the past and the present.

Richard Demarco's commitment to the premise that art is an essential component in the projection of ideology and hope has a parallel in Australia — American artist William Kelly who has lived in Australia for over 20 years. Kelly has also committed a large part of his creative life to the peace movement and to art projects that deal with humanist principles, to issues such as violence and war. In Violence to non-violence: individual perspectives, communal voices (1994), Kelly states, 'It has been said that a painting can never stop a bullet but I am convinced that a painting, a piece of writing, a piece of theatre can stop one from being fired and a fist from being raised in anger'.10

Arising from a single tragic event of public violence in Melbourne, Australia (the tragic killing of seven people and the wounding of 19 others by a gunman) in the early 1990s, are world-wide questions of racism, the role of the media, gender violence and of militarism. Violence to non-violence is an anthology of writings by a range of authors, poets, academics, and songwriters from all over the world. They accompany screenprints from The Peace Project, initiated by William Kelly. Douglas Kellner, Professor of Philosophy at the University of Texas, (Austin) wrote in the Foreword, '[The writers and artists] invite us all to join the struggle. To practise non-violence. To renounce violence. They educate and inspire us to practise non-violence, to hope and fight for a world without violence. To become better human beings in a better world'.11

Richard Demarco and William Kelly both confront issues that are central to the survival of civilisation, as we know it. In Beyond Conflict, Demarco has defined a poetic and powerful formula for political and personal dialogue, which focuses on cultural reconciliation and hope. 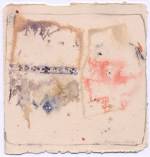