A mix of sculpture, tapestry, film, photography, painting and collage by 33 artists whose work refers to, or manipulates, the built environment, this exhibition heightens awareness of one’s own physical presence and the intensity – and complexity - of our relationship to the material and spatial world around us

An impressive cast-list has been assembled for this group exhibition of artists from the UK, Germany and Holland - among them Richard Wentworth, Phyllida Barlow, Rachel Whiteread, Richard Deacon, Tony Carter and Michael Craig-Martin - curated by the Griffin Gallery’s Becca Pelly-Fry and sculptor Steve Johnson. But it is the discoveries among the 33 artists here that bring, to my mind, the revelations, in their careful interrogation not of grandiose architectural themes but the telling details of our everyday encounters with landscapes great and small.

And for that, we have to thank Johnson, whose own work is, as Pelly-Fry puts it, a celebration of “the poetry of the every day”. The initial inspiration came from a lecture Johnson gave in 2012, called Architecture as Metaphor, which explored “how art since the medieval period has represented or manipulated the built environment”. His selected illustrations were: Stefano di Giovanni’s The Ecstasy of St Francis (1437-44), Vermeer’s Girl Asleep at a Table (1657), Edward Hopper’s Nighthawks (1942), Walter de Maria’s Earth Room (1968), and Whiteread’s Ghost (1990). He says: “The lecture was a way of using a subject to compare and contrast and imply a kinship between artists long dead and working now … a bridge in time.” In the course of this lecture, he was struck by the role that spatial or architectural detail plays in intensifying these connections: for example, the way Vermeer captures the gleam of daylight as it glances off the paintwork on a doorway beside the girl’s sleeping form.

The day after the opening, I was given a guided tour of the exhibition by Johnson, along with several of the artists based in Germany and Holland, and their shared sensibility and skill in interrogating the under-the-radar, everyday environments as source material for psychological enrichment soon became apparent.

Susanne Rosin’s stop-motion animation Einkaufspassagen im Erfurter Hauptbahnhof, am Donnerstag um 16:20, Vorfrühling (2016) is a masterpiece of observation. She also works as a set-designer, creating fantasy landscapes for film and theatre, which might explain her intense attachment to the opposite sort of space: the most mundane areas of shared transit and non-dwelling that are vital to, but completely uncelebrated in, our lives, such as doctors’ waiting rooms, ordinary high streets, airport lobbies, suburban shopping malls and public toilets. These she painstakingly recreates using digital photographs to conjure hyper-real versions of flooring, walls and ceilings, but she underscores their fake-ness by creating soundtracks with the cheapest kind of muzak she can find online, along with recordings of the appropriate ambient sound: chatter and hum, traffic and sirens. Instead of filling these scenes with pretend people, she uses shopping bags or luggage trolleys, which trundle and ponder as they move through these spaces, representing all the necessary diversity by the style and branding of each carefully reproduced bag or luggage trolley. She says: “I describe the situations using cheap materials and I make it very cheaply. I want it to struggle. For me, it’s really important you realise how it’s done.” Rather than seeming drab, these films are endearing, funny, poignant and acutely observed – there is a delicious perversity to seeing familiar but unlovely places celebrated in this way.

Johnson’s piece here also brings the shock of the familiar, with great craftsmanship and eye for detail, but the intention is more to jar and unsettle. Johnson casts scaled-down elements of everyday spaces in bronze, paints them in thick, grey enamel paint, then places them on a wall in such a way as to intensify the disjunction between scale and setting. In Academic Angst (2017), we have a bog-standard modern wall-hung radiator, complete with pipes, a bookshelf, a doorway, a light switch, a skirting board and a power socket. But the Anglepoise lamp attached to the power socket is hanging free, dangling below the skirting board, to draw attention to the missing floor; the lamp is a graphic depiction of gravity. Johnson says: “This is a psychological metaphor for being exposed … to the things which a home would normally provide as security.” He thinks it a timely evocation of modern Britain, which is “suffering a Conservative austerity, with thousands of people living on the street. In spite of being quite meticulous and beautiful, it’s really about how the security of the home has been removed.”

Political undercurrents are certainly present in this show: Stephen Robson’s elemental painting Port (2013), of an intense, almost Mediterranean, blue sea surrounding Dover harbour, may well be making a humanitarian point, with the meanness of the harbour entrance offering faint welcome to any migrants. But it is a current of kinetic intensity that dominates as we move from the pulsating energy fields of one of Dieter Roth’s iconic 6 Piccadillies (1969-70) screenprints to the liquid meditations of Evy Jokhova’s Puddle (2011). A film of a tower block reflected in a puddle as wind distorts and remakes it, the piece is itself reflected in a tray of water placed at the screen’s base. At the show’s core, we encounter the coiled elegance of Owen Bullett’s sculpture Raft (2017; created for this show) which he describes thus: “A solitary survival platform, cast adrift on a concrete sea: elemental vessel, transient craft, floating planks, dead sea.” Its uneasy equilibrium works well sandwiched between Carter’s Point of Balance (1983-86), a spirit-level on top of slices of Sicilian marble and MDF, and Barlow’s toppling tower of scorched-looking boxes, Untitled, Stackboxtube (2015), seemingly pinned in place by the force of an oversized, bent pink baton. It is good to see three of Carter’s pieces here – he was clearly a supporter of Johnson’s ideas for this exhibition, and wrote the introduction to the catalogue before his death at the end of last year; an event that makes the presence of his sculptural evocation of medieval vanitas paintings, Intimations of Mortality (2015-16), even more profound.

There is a mood of disequilibrium or fragility all around this central grouping, expressed in Maurizio Anzeri’s Heavenly Sounds Pink & Yellow (2016) - an ethereal, airborne structure, like a vast windbreak, hand-stitched on to a black-and-white photograph of a bleak and empty beach – and also in Martin Pfahler’s precisely crinkled geometric paper sculpture, Imprint (2016), a flimsy tower of fine tissue on the point of collapse. Pfahler reveals that he has to be physically present to install this piece every time it is shown, as it crumples when transported. “Is it a self-portrait?” Johnson asks. No, says Pfahler. But its requirement for Pfahler’s physical presence means, as Johnson points out to him: ‘When you die, this work will no longer exist.” Now there’s architecture as metaphor.

On the adjacent wall, there are works that explore landscapes with darker narratives, of survival or the deeper subconscious. Miyuki Okuyama’s Circus Tent (2006-11), from her Safe Playground Series, shows a simple paper tent, lit from within – revealing the shadow of a donkey – and surrounded by fairy lights. In this series, she creates miniature landscapes, usually the “common places”, she says, “like grain elevators and hospital buildings”, and conjures eerie atmospheres from small details, night-time settings and lighting. She says she is trying to evoke remembered fairytales from her youth in Japan, which embraced and accepted the “dark side” of the child’s psyche, in a way that seems altogether absent to her in Holland, where she now lives. Her scenes are photographed using analogue film and processes, then expanded. “I like that this is a very small model, blown up to a metre,” she says. “It is almost physical - you could go into it.”

Nearby are two of Dutch artist Rob Voerman’s photographic representations, also of surreal models in landscapes, although his locations appear to have suffered some apocalyptic disaster. Voerman’s models often reference modernist mass housing - in Unité (2014), the building is based on Le Corbusier’s Unité d’Habitation in Marseille – and he takes great pains to emphasise the buildings’ scorched and devastated fabric and surroundings. Yet the background sky he uses is always from photos he takes in the countryside, at sunset. This gives these crushed cardboard communities something of a euphoric – or “romantic”, as he says – atmosphere, further enhanced by the warm amber or coloured lights that appear to be burning in the windows. They speak of survival, as well as destruction.

Order and chaos are also variously evoked in a nearby wall grouping, which sees Michael Craig-Martin’s generic (yet somehow intensely specific) wooden Gateprint (2015), placed to the right of Whiteread’s Herringbone Floor (2001), whose crooked parquet lines indicate some major seismic activity, while to its left is Fabian Peake’s creepy, childlike pen and ink drawing of a house seemingly imploding (Ferment, 2004). Nearby are two of Ulrich Jansen’s paintings, elegies to everyday oddness, including a meticulous, black-and-white portrait of a humble, typical former East German holiday cottage (Schulstrasse, 1998); utterly banal in all its details, including the satellite dish, it is elevated by dint of its transformation on to canvas via oils.

On the near wall sit two of Berlin-based Wolfgang Schlegel’s latest series of sculptures involving pieces of driftwood adorned with magnets and balls, held together only by magnetic force. Referencing their lack of adhesive support as well as their resemblance to the science fiction cities he loved to create as a kid, he calls them Life on Noglu (2017). High above these two works is a Richard Wentworth piece, called Seen Unseens (2017). An ornithological ready-made, it is a real bird’s nest – empty, but with a mirror over it so you can see it for yourself.

There is little in the way of overt architectural symbolism, except on the far wall, with Arturo Di Stefano’s huge oil painting, Florentine Window (2015), which renders the rainbow-hued light of each glass pane in exquisite detail and conjures the dank smell and tolling bell of the vast cathedral that probably inspired it. Next to it is its sulphurous twin: Peter Newell Price’s Carbon Eclipse (2017), a cast of an actual gothic rose window, rendered blasted and lightless in carbon fibre and epoxy resin.

Deacon’s contribution here is actually an anomaly: it is the only work destined to become a structure. Designed in conjunction with Serbian artist Mrdjan Bajic, this elliptical, calligraphic swirl has now been commissioned for Belgrade’s Kalemegdan Park, in the hope that it can unite two formerly antagonistic neighbourhoods and become a bridge between communities – infrastructure as metaphor. Pelly-Fry says: “It’s an important work on a number of levels. It exists as an idea and it’s one that potentially will have a great impact on how the local community interacts with the space and with each other. The idea that a sculptor is working in this way with an artist … is really interesting: addressing social issues through a sculpture.”

One of the most striking aspects of this show, given its subject matter, is the almost complete absence of people in any of the works, a deliberate ploy, says Johnson: “If there aren’t figures in a picture, you’re more than likely going to project yourself into it and inhabit the space with curiosity. [The philosopher] Gaston Bachelard observed that a closed drawer is more captivating than an open drawer. Once opened, the mystery escapes. The closed drawer will be a catalyst for the mind’s eye. The same holds good for a painting or a photograph of a closed door, for example. You can’t ever open the door, so you’ll tend to imagine what’s on the other side.

“The exhibition is really about how an artwork referring to the built environment can be inhabited by subjectivities and (enable you) to find shelter from the mundane.” 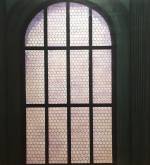 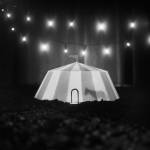 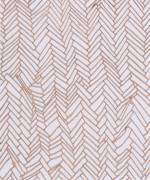 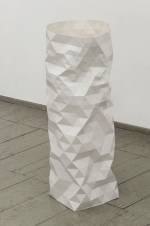