Rachel Whiteread is the most successful and original artist to have filled the big space at Tate Modern, the Turbine Hall. Her white landscape of cubic boxes offers the museum-goer something of a dreamland 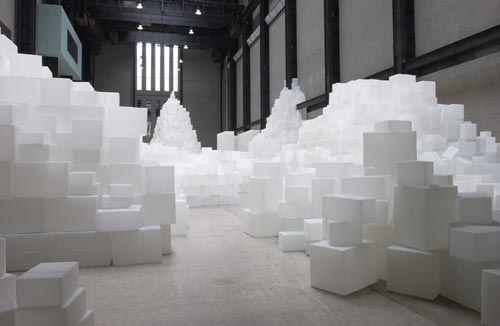 Space and scale are subject to an ingenious interplay by Whiteread. At first, one might, on entering the scenario at ground level, feel as if one were subsumed in a warehouse where the warehousemen have been stacking things to rule, before, or immediately after, some industrial dispute. Then a gradual change of perception takes place, and one's own human scale is rendered insignificant by the great stacks looming overhead. Whiteread has transformed the Turbine Hall, visibly on two levels - that of entry, and that of the overhead galleries. 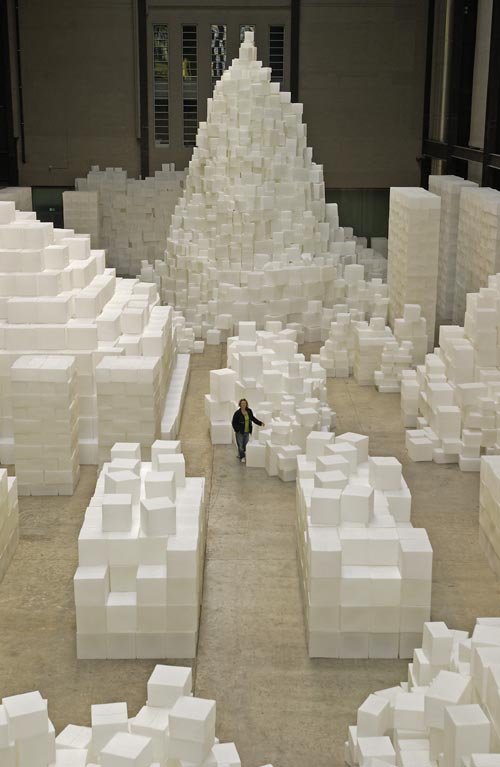 The analogy is not primarily to a landscape of icebergs, such as Caspar David Friedrich might have emulated in his paintings, giving polar severity. The boxes came about from cardboard containers that Whiteread found while clearing out her recently deceased mother's belongings - ten boxes, containing certain memorable items of a past life. Whiteread filled them up with plaster, replicating them as casts some 14,000 times. The staples, blemishes, scars and folds are all 'kept in'. So, the resultant language of solids, voids, canyons, crevasses, cross-axes and even rooms, of a kind, proliferated exponentially for the Turbine Hall.

Is it all, perhaps fortuitously, a subtle play on the artist's surname, and on the way in which you read the resultant white work? Or is it also some memory game that she claims here to be playing? Since Whiteread began her career by making casts in resin of the insides of hot water bottles, before moving to casts of rooms, houses and full-scale human spaces, she has come full circle. Needless to say that along the way, she actually - and quite coincidentally - had cause to visit the Arctic as part of the Cape Farewell project on climate change.

'Embankment' is also an investigation into 'site/non-site'; the rendition of landscape and its denial. The scheme turns on its head the inherited idea of the dramatic, sublime, or picturesque landscape 'veduta'. It enables us to evacuate that tight scenario that hitherto entrapped all artists who would explore spatial configuration. The passing of Whiteread's mother left her the detritus that inspired these boxes. Now in 2005, full circle so to say, Rachel's four-year-old son, Connor, can climb around Antartica more convincingly, and perhaps more successfully, than Scott. Like the tragic, beaten polar explorer, Whiteread can be said to have made mountains out of molehills, prone to complain when things are not quite right. Difficulties loomed up, but Whiteread, by contrast, always surmounted them, unlike Scott. Now in mid-career, Whiteread is on a roll. Where next? The desert or the jungle? She is a global superstar. 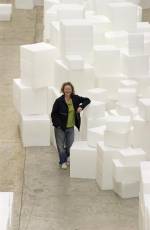