Drawing on Peggy Guggenheim’s 1943 exhibition of the same name, 31 Women is a thoroughly relevant and equally captivating and surprising contemporary curation, opening dialogues across time and space 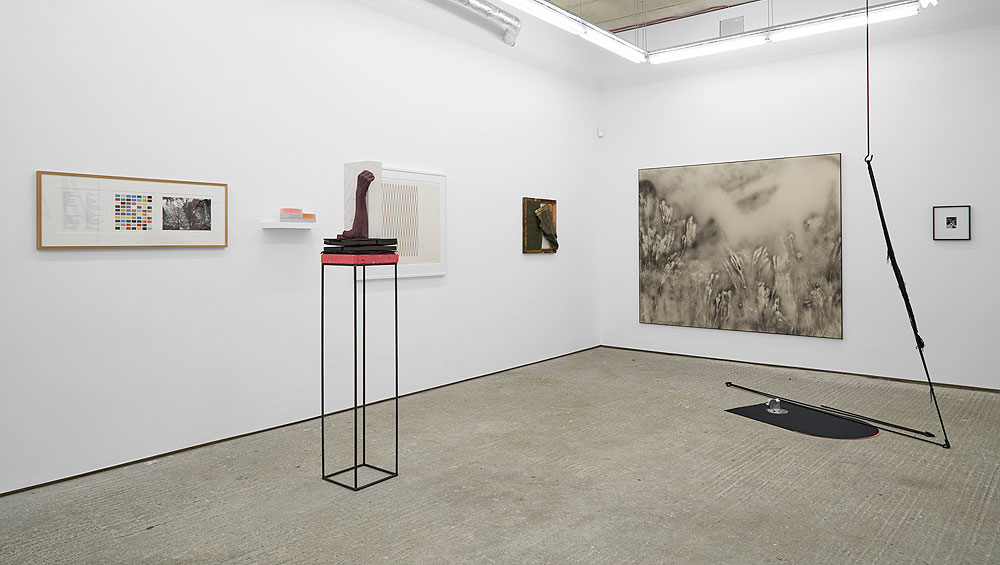 More accurately, one ought to say “conversations” plural, since the east London gallery space is a cacophony of dialogue, between works that share aesthetic similarities as much as those that relate in terms of media, modality, subject matter or underlying concern. To set their iteration firmly in its new location – just as the original was rooted in the New York avant-garde scene of the 40s, the new centre of the art world, having stolen the crown from Paris – Breese and Little have further ensured that all artists included engage, on some level, with the British art scene, be that through representation or being based here. Of course, the Young British Artist (YBA) movement is given a fair showing with a handwritten piece by Tracey Emin (Kiss Me, Kiss Me, Cover My Body In Love, 1996); a small Rachel Whiteread sculpture (Step, 2007-08) that looks rather like a pile of bars of translucent soap; and a Gillian Wearing photograph (Claude and Gillian’s shadow, 2017), taken from her recent National Portrait Gallery exhibition, for which she has imposed her shadow on to a photograph by the groundbreaking, early-20th-century, queer artist Claude Cahun. A hybrid of two works, from 1938 and 2017, this photograph creates the perfect temporal bracket for the exhibition. The confessional Emin piece, on the other hand, describing the desolation, despair and self-loathing of a young woman living in a hovel and drinking for company, reads, Breese suggests, almost as an introductory text, sketching the scene of the female artist living and working in an androcentric world. Can she live up to her male counterparts? Can she care enough to get beyond caring and succeed?

The two works by artists from the original exhibition – both of whom have definitely done just that – are therefore key anchors to the whole show. Yarrow’s 1935 Kneeling Purple Figure (Morges) looks to all intents and purposes rather like the image Emin’s work conjures up – eyes and mouth agape in uncertain dismay, kneeling in submission, against a bloody red smear of a background, to whatever the world might throw at her next. This work also speaks loudly – perhaps mostly here in terms of colour and general shape – to the nearby Babs the Impossible (2015) by Clare Woods – on first glance a mass of abstract swirls, but, I am told, actually a ballerina’s foot. Rather like the is-it-a-rabbit-is-it-a-duck? picture, once I see this, I cannot return to my previous ignorance/innocence – another metaphor for the female state of being in the world, I wonder?

Phoebe Unwin’s Leaning Figure on Soft Ground (2015) dominates the back wall in an understated, muted manner. It is exquisite in its detail and, created by laying stems of flowers and grass on the canvas before deftly diffusing Indian ink on top, captures something of the early botanic photography of Anna Atkins. While there are no digital works in the exhibition, several speak of them in different ways, another example being Celia Hempton, whose Bunny, India, 11th February 2016 (2016) was painted while she chatted to an anonymous (inevitably masturbating) man via webcam on Chatrandom, a website offering digitally mediated sexual encounters with strangers. Bunny, it should be noted, is the only man in the room.

Of the four hanging works in the show, Laura Aldridge’s Be a Nose! #2 (2014), reproducing the smiling sun from a ubiquitous air freshener, captures the celebratory sentiment of the exhibition, while Aimée Parrott’s Pelt (2017), which seems to spill across the main floor space, causing the visitor to watch where she places her feet, aware, at all times, of the space her body is taking up in the gallery, was created if not as a site-specific piece, then at least as a context-specific one. Having had a solo show at the gallery last year, Parrott was aware, thanks to Breese and Little, of the other works in the exhibition as they were confirmed, and produced her own piece in response. Certainly the colour scheme – a rich purple, pink and black – pulls out these tones in works around the room, including Rana Begum’s (un)folded wall sculpture, No 409 Fold (2013); Lydia Gifford’s swirling Javelin (2017); and Eva Rothschild’s surreal sculpture, The Thinking Arm (2016), which again speaks to the corporeality of the female (artist).

Helen Chadwick’s gorily visceral Polaroid, Meat Abstract No 8 Gold Ball/Steak (1989), is the most blatant on this point, rendering visual the abject and bloody self-revulsion of Emin’s neighbouring disclosure, in which the body and breasts are rejected as meaningless flesh. More abstract, yet equally potent, is Angela de la Cruz’s Ripped (1995), a savagely torn canvas, metaphor, perhaps, for the woman artist herself, as she is subjected to criticism. Guggenheim’s original exhibition, for example, was met largely with tones of dismissive condescension from reviewers, including Henry McBride in the New York Sun, who admitted that while women surrealists might actually turn out to be better than men, this could easily be explained by the fact that: “Surrealism is about 70% hysterics, 20% literature, 5% good painting and 5% is just saying boo to the innocent public”.1 While maintaining a generally mocking tone, Edward Alden Jewell, in the New York Times, was more genuinely generous in his praise, noting that “the exhibition yields one captivating surprise after another”2 – and this, most certainly, might also be said of Breese Little’s current version, with not the slightest mocking inflection at all.

While there has been a plethora of all-women shows taking place over the past couple of years, many of which seem to serve no end beyond ticking boxes and bringing together artists, somewhat regardless of their talent, selected solely on grounds of gender, this is a pertinent and art-historically grounded exhibition, which stands out from the rest and, hopefully, will also stand the test of time every bit as well as its forebear.