From the world’s deepest underground marble quarry to a fragment of pink marble from Trump Towers, via Freud’s consulting room, Siegel takes us on a journey to explore how objects come to represent status and success 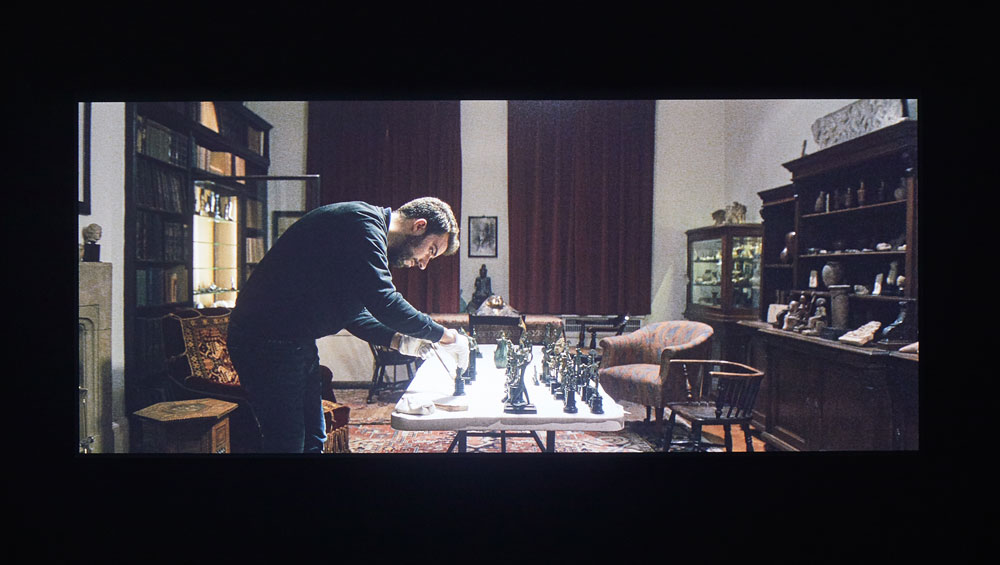 There is a seductive stillness about Amie Siegel’s films that mesmerises, pinning the viewers in place as she parades her spatial explorations, in surreal and sometimes jarring adjacencies, to work their strange resonances on our imaginations. She has described her work as “a bit like writing poetry, with accumulating juxtapositions of discontinuous elements leading to implicit outcomes”.

The New York artist (b1974) specialises in meditations on consumer culture and materialism, highlighting the value systems that underpin our evaluations and displays of status and success, through the voyeuristic, dispassionate lens of her photography and films as well as performance and installations. She only has three works in this, her first UK solo show, at the South London Gallery, but they articulate her themes as eloquently as any more prolific exhibition would.

The pacing is slow, smooth and dreamlike in Quarry (2015), the main event in the show. Screened in the SLG’s huge ground-floor gallery - blacked out, its doors closed off from the usually hubbub – Quarry places us in another dark place, a barely lit, subterranean grotto. The steady, low-slung tracking shots explore, one after another, its labyrinthine chambers of marble, their glassy surfaces and veins reflected in water, while the impressionistic, uplifting orchestration of Gustav Holst’s Neptune weaves an aura of mystery and enchantment. It is the deepest underground quarry in the world.

As the film progresses, we see evidence of the exploitation of these caves – rough openings and apertures hacked into the precious limestone – until we reach the business end of this luxury plunder: caverns no longer enchanted but grubby, cold and brightly lit, populated by tiny people and huge machinery. Siegel’s camera dispassionately observes the comedy and bathos of a large Caterpillar truck with a big, muscular arm, as it swipes at one monolithic block, straining to turn it over but nearly upending itself in the task. The soundtrack switches to the buzz and thrum of machinery, as the marble is processed.

Siegel’s camerawork is neutral throughout, as “loving” in its high-definition renderings of the trickling streams of water that wash the marble while it is being sliced as it is of the rough, copulatory thrusting of the rusted metal polishing machinery. We see the slabs being hoisted and transported mechanically down a vast underground storage hall, where countless similar packages await shipment. A celestial choir spins otherworldly melodies as Siegel segues into drooling closeups of the marble itself, panning across the veining and patterning that enriches its cold, white crystalline form. Sublime, ancient, corrupted: we see stacks of the stuff laid out on the mountainside, toppled like so many giant chess pieces, some with the word “fantastico” scrawled on their surface.

And then we are indoors, following the camera as it caresses a gleaming expanse of ochre marble, artfully lit, panning past three exquisite vessels on its way – are we in a temple, or a tomb? – to arrive at the unseemly collection of knobs and wires that represent a gas hob, set into a marble counter. We are in the highest of high-end kitchens, complete with perfect potted orchids. The lyrical soundtrack keeps us pinioned in a state of anticipation and wonder as we glide through more rooms reeking of money: marble bathrooms, polished sitting rooms, their modernist furniture laid out like sculptures in a gallery, the vistas beyond the furniture reassuring us that we are in that ultimate status symbol: a Manhattan penthouse; the New York skyline visible through the windows.

Siegel has said her work often “reproduces the behaviour of the system it describes”, and she has clearly mastered the tropes of lifestyle and premium property porn. There is a disruption in the rhythm towards the end, however, as Siegel ups the pace to take us from one marble-infused setting to another, a bland slide-show samba of aspirational living; architects’ models are mixed in with photos and renderings, each almost indistinguishable from the other. Who or what is the “quarry” of this film: the marble we plunder from the Earth or the suggestible consumers who lust after it as the ultimate high-status material, little realising that the more often it gets deployed the less luxurious it seems?

The final tracking shot is a killer: delivered with the same deadpan pacing as before, seemingly in the same Manhattan tower block of the earlier penthouse, we find ourselves in a raw concrete shell, all pillars, red safety netting, and electrical cable dangling down like so many orange nooses, while the roar and wail of New York’s traffic and sirens punch through the luxury-induced numbness.

Upstairs, Siegel is showing another film, Fetish (2016), which takes us on a more sedate, singular journey. Shot at the Freud Museum, London, it focuses on the cleaning of Freud’s legendary consulting room, as two silent figures dust his army of precious figurines, primping and vacuuming his chaise longue, the oriental carpets and cushions. Seeing so many exquisite, ancient statuettes amassed diminishes the impact of any one. We zoom in close on the conservators’ white-gloved hands as they poke, wipe and prod at Egyptian goddesses, African fertility figures and muscular Roman bronzes, transforming them into something mundane or even comical. Erect bronze members and pert wooden bosoms are flicked as dispassionately by the conservator’s fat blond brush as the carved vine that frames the marble Indian devotional figurine; a reference to the probing and tickling of Freud’s own psychoanalytic excavations, perhaps. The soundtrack of the vacuum cleaner sucking the dust away from the display stands jars with a reverential landscape shot of the assembled gods and goddesses, icons of bygone ages and cultures. The fastidious patting and fluffing of Freud’s sofa reveals it to be yet another cossetted icon, rendered meaningless by its museum context. The only object in the entire film that retains some power, some patina of personality, is Freud’s cracked leather desk chair, bearing signs of repeated wear by the body that once inhabited it, in contrast to the plumped and polished perfection of everything else in the room.

The final work abandons film for installation, bringing us up close and personal to a totem of the modern age: a modest fragment of Italian marble apparently selected by Ivana Trump for the Trump Tower atrium, which was purchased by Siegel on eBay from a private collector immediately after the 2016 US election. It sits in diminutive, half-cracked splendour, dwarfed by its large glass case and tall podium, in the centre of the room. Nearby, two huge photographic scans of the same marble slabs that decorate the tower’s lobby are placed on a black surround, their intricate patterns mirroring each other like a giant, pink Rorschach test, exposing human folly in all its squalid splendour. Bravo, Siegel: more eloquent in its silence than any verbal barrage on Twitter, this tiny piece of marble gets the definitive last word. 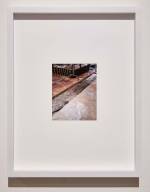