Phyllida Barlow: ‘It’s the first time I’ve experienced making something not within my control. Letting go of that was horrifying’

Phyllida Barlow: ‘It’s the first time I’ve experienced making something not within my control. Letting go of that was horrifying’

As her first permanent artwork, Quarry is unveiled at Jupiter Artland, outside Edinburgh, Barlow talks about its conception and creation, its location in the woods surrounding the house and gardens, and the ‘horrifying’ experience of ceding control to engineers and construction teams 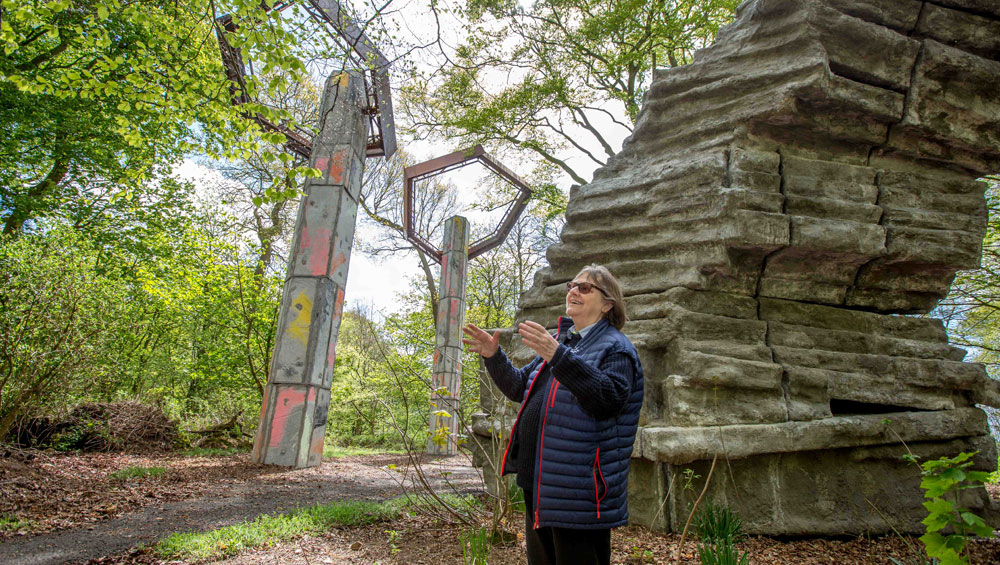 Phyllida Barlow’s first permanent outdoor installation, Quarry, sits in a clearing in the woods surrounding Bonnington House and gardens – the 17th-century Jacobean manor restored by natural healthcare entrepreneur Robert Wilson and his wife Nicky, a sculptor, and reinvented as Jupiter Artland. Barlow’s commission, part of Jupiter’s 10th anniversary celebration, joins a host of other permanent works that have found their way into the park, including Cornelia Parker’s Landscape with Gun and Tree (2010), Anya Gallaccio’s amethyst-studded grotto (The Light Pours of out Me, 2012) and Charles Jencks’s Cells of Life (2011), comprising eight voluptuous man-made hills encircling insect-rich ponds. 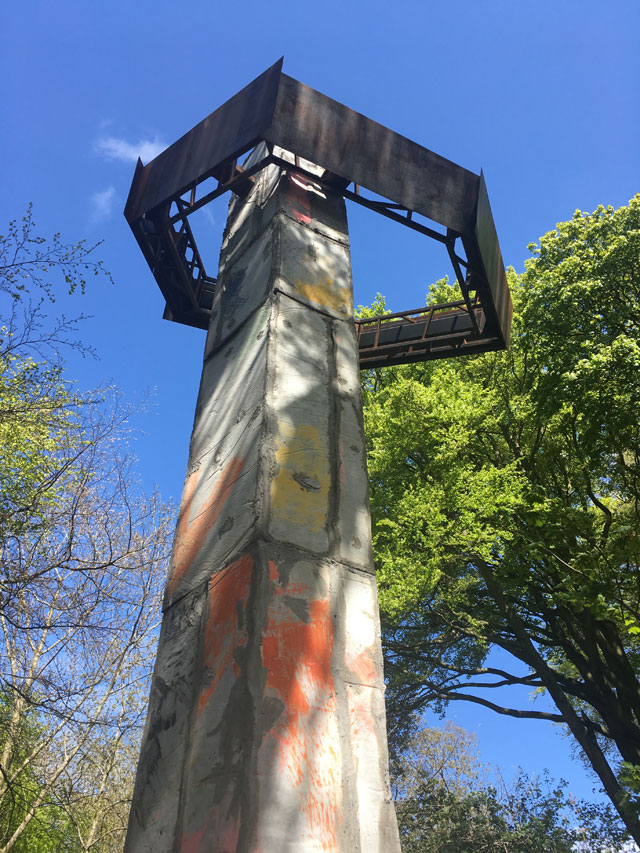 A three-part installation, Quarry includes two towering pillars constructed of rough-hewn concrete sections, their simple contours swirled and stippled, evocative – but not too evocative - of their neighbours’ trunks. They reach up several metres, each with a precarious, rusting metal frame seemingly barely hanging off the top, creating a distinct feeling of tension as they reach out to embrace the sky, the cloudscape and the tree canopy overhead. Their limbs are strangely alien to, and yet sympathetic with, the nearby oak and beech trees. The third work is a squat ziggurat of concrete that has a rock-like quality but also evokes the steps of an ancient temple or ruin. 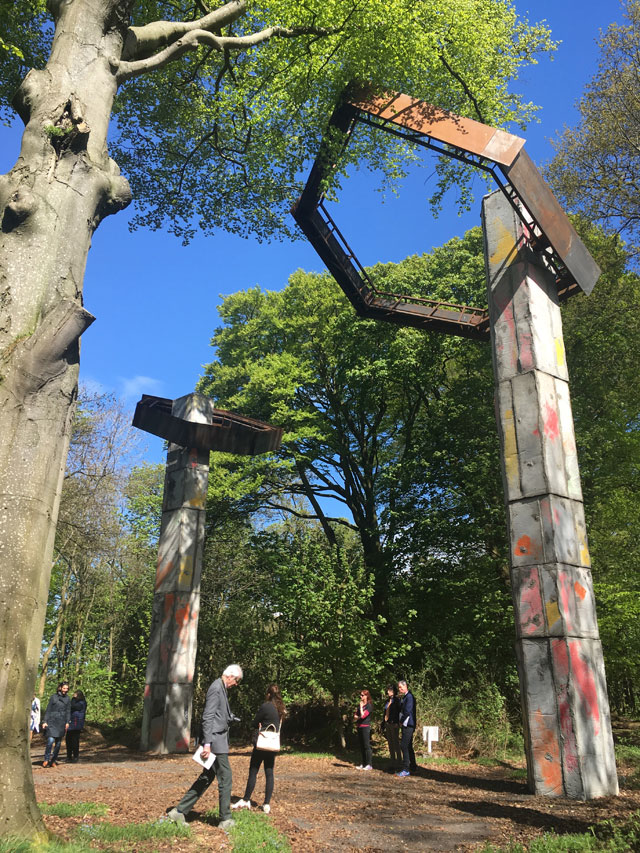 Barlow (b1944, Newcastle) has been quietly making and teaching art for many decades, but her profile soared after she retired from the teaching post she held for 20 years at the Slade School of Art, in 2009 (where she taught Tacita Dean, Rachel Whiteread, Douglas Gordon and Martin Creed, among others, and where she is now emeritus professor of fine art). She had her first major solo show in her late 60s, at the Serpentine. In 2011 she became a Royal Academician, in 2012 she received the Aachen Art Prize, and in 2014 she really demonstrated the exhilarating scale and wit and potential of her work, filling Tate Britain’s Duveen Gallery with her Dock commission. She exhibited Set at the Fruitmarket Gallery, Edinburgh, in 2015, as well as Tryst at the Nasher Sculpture Centre, Dallas, and Demo at Kunsthalle Zürich in 2016. In 2017, she had a solo show at the Turner Contemporary, Margate, and represented the UK at the Venice Art Biennale, filling the pompous, post-colonial British pavilion with her joyously awkward, deliberately dishevelled and colourful structures of wood, cardboard and polystyrene. She is represented by Hauser & Wirth. 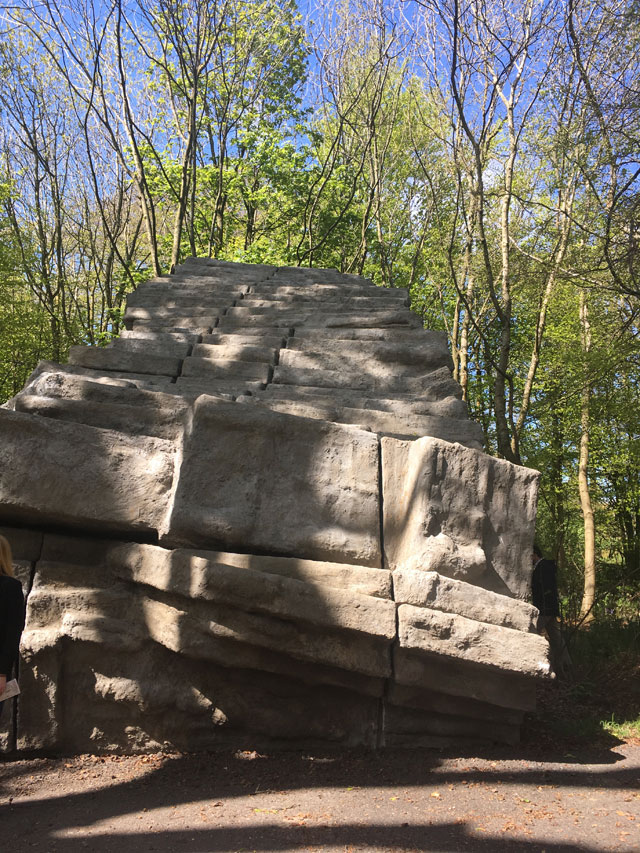 Veronica Simpson: This is your first permanent sculpture, here at Jupiter Artland. Can you tell us how it came about?

Phyllida Barlow: I have made outdoor sculptures before but not permanent ones. When I came to Jupiter for the first time, I was confused by the different spaces, but when we came to these woods I noticed that I was looking up the whole time, and that was really what clicked into place – to give the audience a performative role of looking up and looking through and looking at the sky. Then it was a whole complex issue of meddling with nature so it became important for me that it would be meddling with nature but it would also, from my point of view, have empathy with nature; that the things would somehow be in sympathy with the trees but in stark contrast to them as well. And I kept on recalling disused industrial sites that you might find in very strange places, like down in Cornwall, where you get abandoned tin mines. Or when I went to Ukraine, the outside of Kiev was filled with former communist regime industrial works and they were incredibly potent - very strong, noble images but completely overgrown, taken over by nature. So, I began to want to put these things together somehow and use a kind of industrial imagery in a way that has also a sense of being abandoned and lost and slightly out of place, but at the same time, I hope, in sympathy with this incredible but very fragile environment.

Somehow, I feel we live in a time where you can’t relax in nature; you’re so terrified of it all just disappearing in a flash. So that sort of fragility is something that I also felt I wanted to hold in the arms of these structures here. 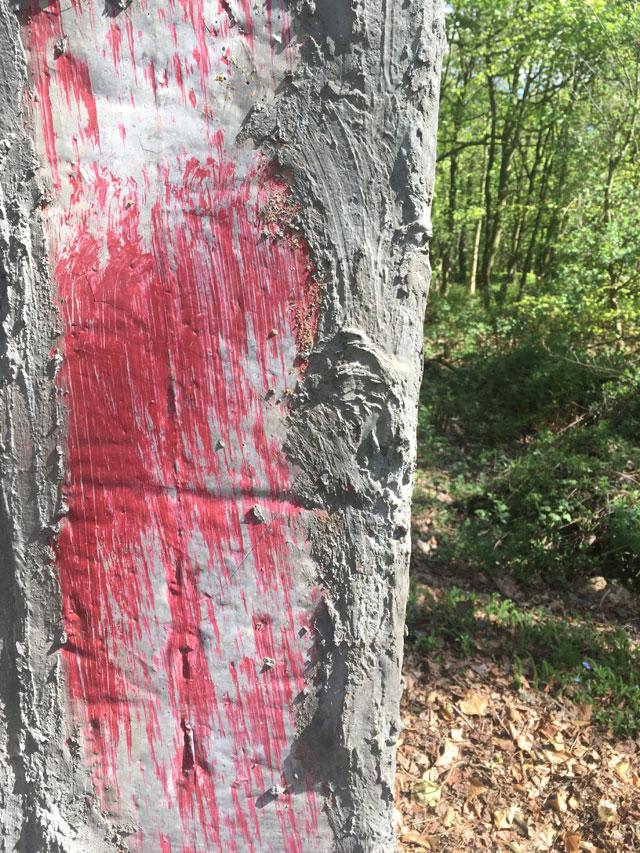 VS: How did you plot where to put them?

PB: There was a path coming through here and I found that that was too much bisecting the site, so I took that beech tree (points to a huge tree), I took the stump there, and I took that sycamore and I made a kind of triangle out of those trees. Then I placed another triangle inside that triangle and that was how I plotted the site. So, very formal, actually, but also it was very important to have objects that would be things that could be walked all around and maybe change the experience as you walk around them, a very sculptural experience.

VS: They really feel as if they make a place, the three of them, don’t they?

PB: Well, that would be wonderful if that happened. Yes, I would love that. The groundsman here, James, has done an incredible job of making this area completely integrated, getting rid of that path and making this integrated into the works. I’m extremely grateful to all the people who helped with that. 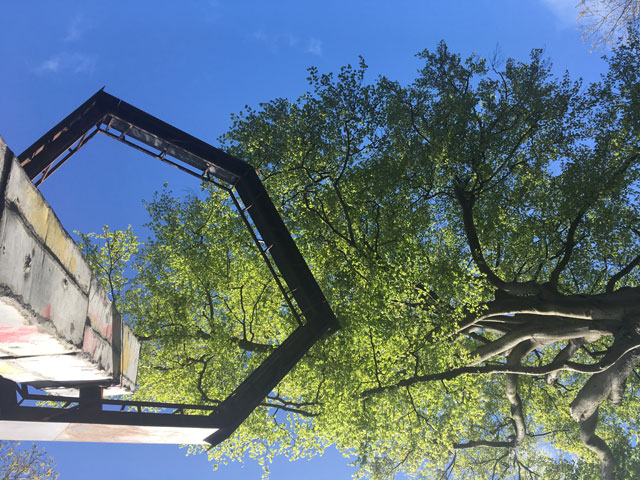 VS: Can you describe how the tall towers relate to these concrete steps?

PB: I wanted something that was very contrasting and also something that gave an idea of a height, the idea of ascension into the canopy of the trees, but in stark contrast to the more upright, pillar-like columns. And I began to think of the strata of rocks, steps or amphitheatres, just as a repertoire of objects that are associated with time in some way, that have a sense of the ancient about them. This ruined or abandoned staircase started to come into place as an image. It took quite a long time: last June, I began working on a whole set of about 40 drawings and then I started to make small models and gradually the lumpen shape versus the tall, upright began to be the right kind of balance between the two, for me.

VS: I love the tilting metal arms on top of the towers. What are they trying to convey?

PB: I am really trying to encourage the sense of shifting your sightline from your eyeline down here to up, to engage with what’s beyond. They are like frames, framing the sky. 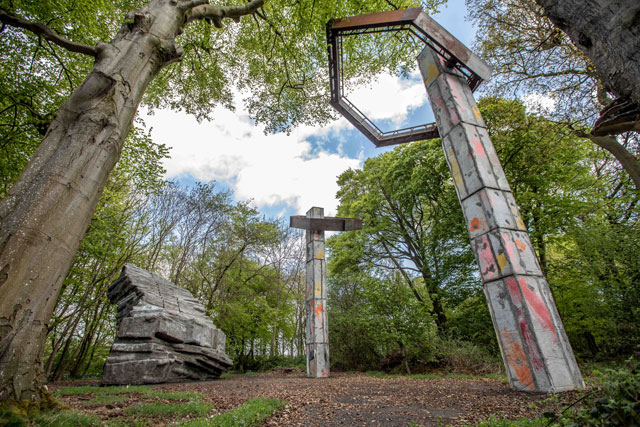 VS: They are kind of like walkways as well, albeit deliciously impractical ones. Were you tempted to make an inhabitable sculpture: you could have had a little walkway between these towers?

PB: No, I was taking my experience first, in that selfish way of being intrigued … I must have visited here four times in different seasons, but it was always about looking up through the branches and looking through. I liked the idea of making something you could see from a distance, looming. And so that then transferred itself to an imaginary audience that maybe I could encourage them to become participants in this by looking up through these frames, into the sky. Somehow it would be about nature, about the environment here … Trying to keep nature and the sculpture somehow in close empathy with each other, but knowing that nature should always win, in my opinion. And I think, for me, when the clouds go through that frame, it’s sort of filmic.

When I came here with Nicky [Wilson], to stake out where these should go, because we had to dig the foundations well in advance, because Nicky is actually a sculptor … she knew exactly what the issues were about spacing and the kind of timing of where you place work.

Nicky Wilson: There’s still a surprise: even when you carefully and immaculately plotted out with engineers where the plinths are going to be, there has to be that moment where you have the opportunity to change. 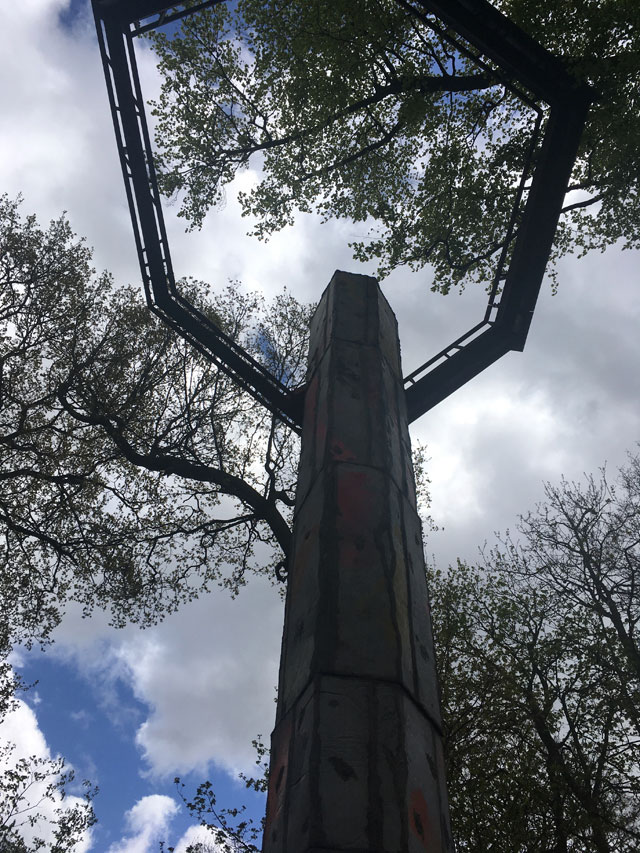 PB: But, in a way, the thing I’ve learned about this is that there is no tweaking. The tweaking has to happen in that process before …

NW: On a scale like this, you cannot tweak.

PB: The foundations are two metres deep. The pillars were made in Edinburgh. We made a template in the studio out of ply. The structural engineer came and did strange stuff on a computer, which was then given to the fabricators. It’s the first time I’ve experienced making something not within my control. Letting go of that was absolutely horrifying. The steel plates, they were very good because they kept in touch with images. So, I was able to say things like: “No, I want them to hang like something very fragile off it.” All that remote work in the studio in London and working with the structural engineer in Edinburgh, and when it came to threading these sections through the columns it actually worked. I couldn’t believe it. Everyone was waiting for something to go wrong … until the cherry picker sank two metres into the mud. I have learned so much.

NW: What you very kindly did was prepare the work so that it had time to breathe within its space, so it found itself. Without being touched, it’s had a month to sit here and get to know itself. Fitting in …

VS: These are not natural colours splashed here and there; they are pinks and peaches and blues. What’s the thinking behind these colours?

PB: I find it paradoxical that when buildings are being constructed or roads are repaired, they are often marked in what one might call very feminine colours – pinks and yellows – and the ends of scaffolding poles are often painted pink or blue, and, in a way, it’s trying to mark these with that kind of gesture. The way builders work or road repairers work, I find it absolutely fascinating because everything is expedient, everything is cut down to what is the most efficient way of doing things, and I like borrowing that language. So, in a way the colour is decorative but it also does relate in my mind to a kind of marking, staining process.