Vasconcelos’s solo show offers a riot of colour and texture in this highly personal, curated sculpture park, celebrating the duality – the glamour and the grind, the dreams and the heartbreak – that typifies women’s lives, on a monumental scale 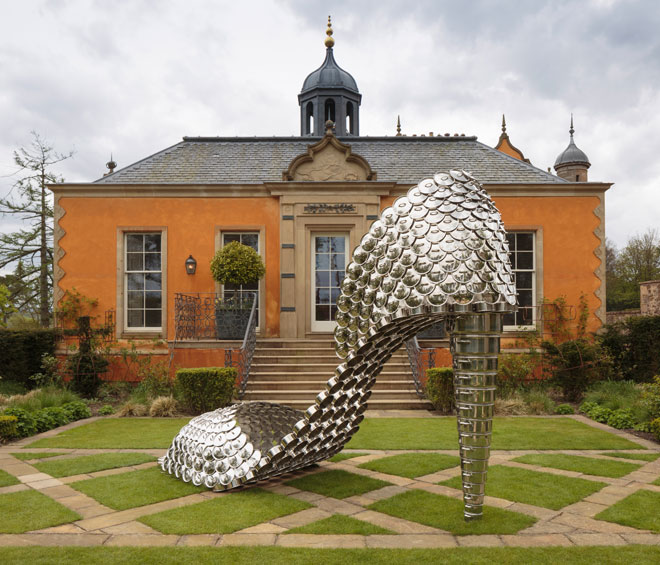 Shortly after Jupiter Artland opened, it hosted a firework display by Cornelia Parker (Nocturne - a Moon Landing, 2009). This year, to celebrate its 10th anniversary, it has launched an anniversary programme with two equally explosive but very different female talents. Phyllida Barlow’s newly commissioned work, Quarry (2018) offers three permanent monumental structures – two looming grey towers in concrete, adorned with crowns of rusting metal, and a stack of crumbling concrete steps reminiscent of some Mayan ruin - set deep in the woods. Meanwhile, Portugal’s Joana Vasconcelos (b1971, Paris) has filled Jupiter Artland’s gallery and surrounding spaces with a sculpture carnival of texture and colour, evoking the minutiae of women’s lives on a magnificent scale.

Vasconcelos cuts a stately and elegant figure, armed against the brisk Scottish spring breezes in a tailored, buttery yellow wool coat and traditional patterned scarf. This is the woman who dangled a chandelier made from pristine white tampons (The Bride, 2005) in the Palazzo Grassi for her first Venice Biennale outing in 2005. In 2012, she was the first female artist to be invited to exhibit in the halls of Versailles; her show, which included a pink-feathered helicopter, went on to become the most visited in France in 50 years. She returned to the Biennale in 2013, as Portugal’s official representative. 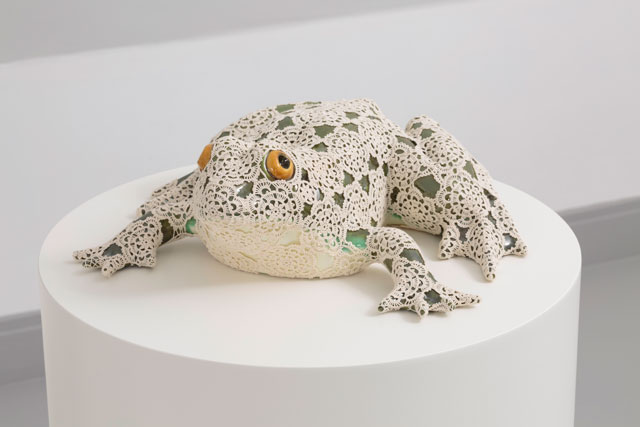 Now she is responding to the rolling, pastoral picturesque setting of Jupiter Artland, a 17th-century Jacobean mansion on the outskirts of Edinburgh. While restoring the house, its grounds and mission were also reinvented by homeopathic medicine entrepreneur Robert Wilson and his sculptor wife Nicky, whose careful curation of this emerging sculpture park earned her the nickname “the midwife of contemporary art” from landscape architect Charles Jencks, whose own Cells of Life (2011) land installation forms the park’s centrepiece.

Vasconcelos could give Wilson a run for her money for the title of contemporary art matriarch. Her two-storey warehouse work studio in the port of Lisbon is occupied by 50 full-time employees, who are treated daily to lunch, as well as free yoga and gym classes. If there is a faint whiff of “factory” about this scale of production – and the fact that many of her works end up being reproduced as multiples – the passion and sincerity of their conception are clearly articulated by this self-assured artist. 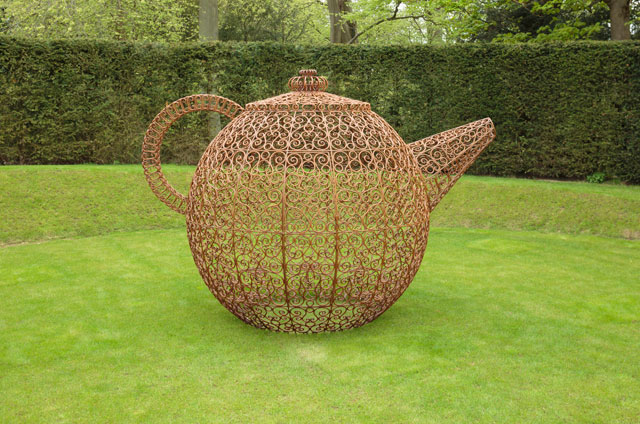 She tours us around the exhibition, opening the ornate iron gate to her ornamental teapot structure, Té Danzante, which sits in the centre of the small, hedge-fringed garden to the rear of Jupiter’s cafe, and perches inside for a photo-opportunity before inviting the rest of us to try it out; the metal ledges are not comfortable. This kind of ironwork is uniquely Portuguese, she tells us: only they create their patterns in small pieces which you can then weld to your own designs. The filigree quality of the structure speaks of her earlier training as a jeweller. Normally, she tells us, she would plant jasmine tea in and around the teapot so its vines would clothe the structure. Her inspiration for this work was Catherine of Braganza, a Portuguese princess who became the wife of King Charles II. Her marriage to this fickle king was problematic (she was Catholic, for starters, and produced no heirs), but, apparently, he was partial to the tea she brought with her from Portugal, taking a cup of that special brew with her at 5pm every day. In this way, she introduced the English both to tea-drinking and that late-afternoon ritual. 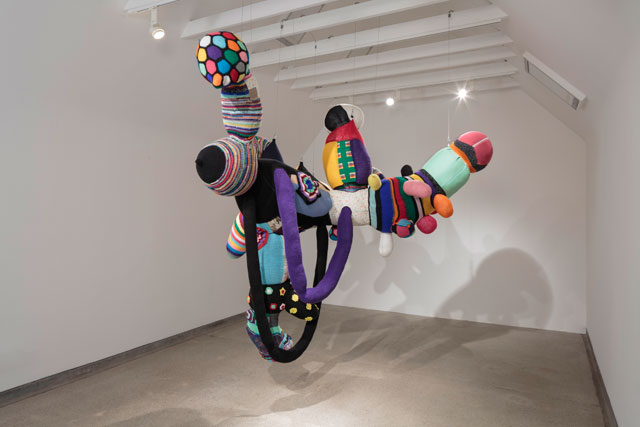 Dominating the small gallery space at Jupiter is one of Vasconcelos’s trademark Valkyrie (#3, 2004), a large, knitted stuffed toy of bizarre but exuberant construction. This Valkyrie series was conceived as a way of making monuments out of recycled clothes and beloved domestic furnishings, celebrating the wear and craft and care of their creation and daily usage. There are smaller versions as well as larger ones in this series. With version 3, she tells us, she knew the provenance of every item that went into it. But she also tells us she currently has 25 people working to conjure a massive Valkyrie for the atrium of the Guggenheim Bilbao. So, while that element of simple domestic craft is still, there is none of that humble household significance, as these knitted elements are conjured anew. Her patter is persuasive, however, as she explains: “They are named Valkyrie after the women who flew over the battlefields to save the bravest warriors. This one is my way of saying women can be warriors and fighters in a good way. They are made with a lot of love and intimacy and in this way become public.” 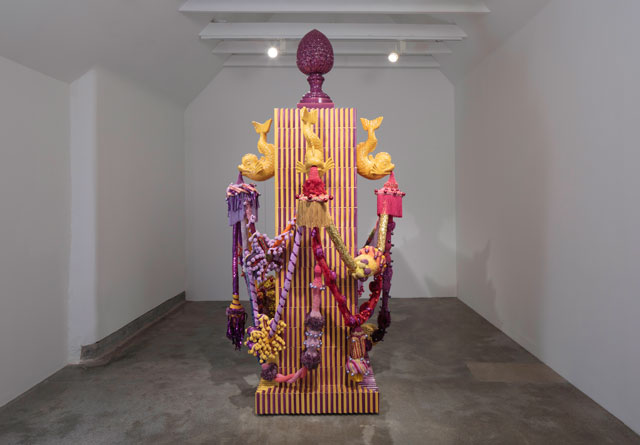 The other two works in the gallery are also predominantly knitted, but, for me, slightly problematic, as their decorative profusion seems to be at the expense of clarity or profundity. Volupta (2014) is said to represent the goddess of sex. It is a large ceramic pillar, incorporating decorative elements typical of Portuguese architecture: ceramic tiles are ridged and striped in lilac and saffron so that they appear to change colour as your perspective shifts; and dolphins, which frequently appear in Portuguese fountains, are here spewing woollen “fluids” rather than water. It is mesmerising and slightly repellent, as this vivid chaos of colours – crimson, lilac, yellow, gold, fuchsia, purple – and forms, including tassels and bubbles, sequins and pom poms, becomes a burlesque bonanza. 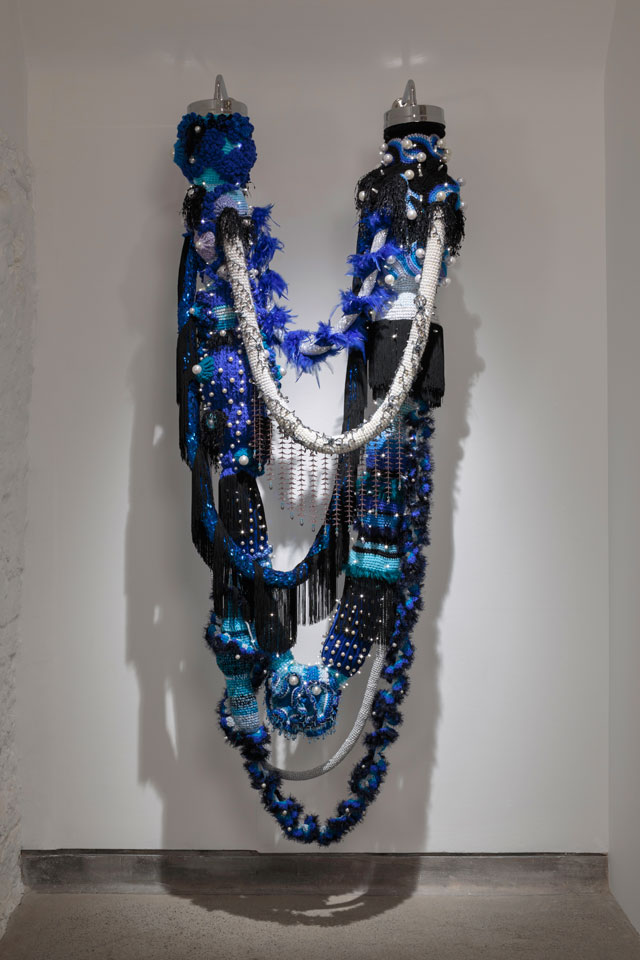 Nearby a blue knitted sculpture, Longroiva (2016), is supposed to represent two lovers having a shower together. There are two large metal showerheads here, gushing with knitted drapery, as well as flashing fairy lights pulsing white amid the blue.

There is much pleasure to be had, however, in discovering Vasconcelos’s works among the smaller buildings and outhouses. A room above the shop, ascended by way of a rickety staircase, features a range of sculptures of ceramic animals, their fangs and pincers and fierce stares sheathed in crocheted finery. A dovecot down the lane hosts her film Hand-Made (2008), a hypnotically appealing work that follows a troupe of female knitters and crocheters as they sit knitting and crocheting in Portugal’s most significant ancient structures, from prehistoric standing stones to palaces. Outside the Dovecot, fringed by ornamental shrubbery, Vasconcelos has placed one of her series of slippers – high-heeled shoes fashioned from rice pots and lids. This one, Carmen Miranda (2008), has a scaly grandeur, a Cinderella-meets-ugly sister quality as it dwarfs the ballroom beside it. 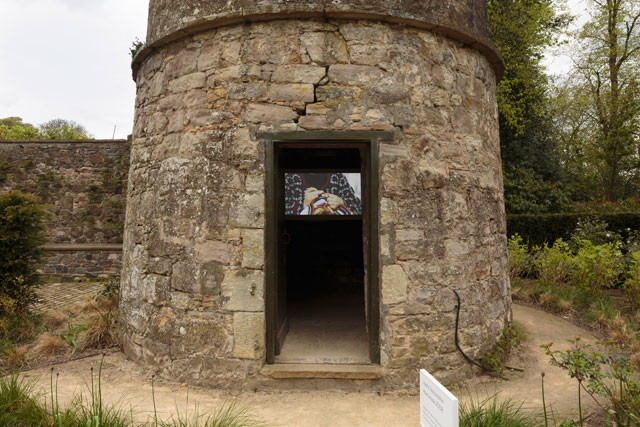 For me, the best piece is in the Ballroom itself, Coraçāo Independente Vermelho (2005). This huge, outsized dancing “heart” is inspired by the gold or silver earrings young women traditionally wear as they are paraded, once a year, through the streets of Portuguese towns, as potential brides. In the background is a recording of Amália Rodrigues – AKA Portugal’s Edith Piaf, apparently – and her traditional Fado song is heartrending, drenched in yearning. 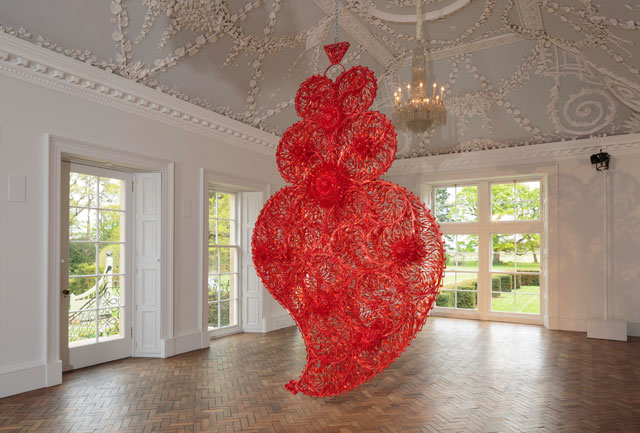 While the enormous sculpture rotates, glittering in this ornamental outhouse, Vasconcelos reveals that it is made of plastic forks, knives and spoons – 4,000 of them. She says: “In Portugal, we listen to Fado in restaurants. When Fado happens, you put down your knife and fork while singing is going on and then when the singer has finished you can eat again.” The irony of constructing such a thing of beauty from knives and forks, when they will no doubt form the bulk of a young Portuguese bride’s daily interior landscape, is not lost on Vasconcelos. As she later says: “Most of my work is done in that duality. People see it and go: ‘Oh, super lovely.’ My work is not so lovely. Which is what life is. We pretend that it’s lovely but it isn’t.”

Vasconcelos has also been commissioned to create a permanent work in the grounds of Jupiter Artland, which will be ready next year. It will be a swimmable pool of at least 9m in length, although the work has been delayed as the hand-painted Portuguese tiles have had to be adapted to cope with hard Scottish winters. 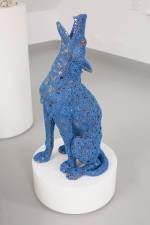 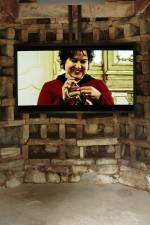