The biennial festival returns for its seventh edition with more than 220 contemporary artists from all over the world. This ambitious collection includes new works, site-specific commissions and new venues throughout the city

For the majority of April, Glasgow has become the temporary home to the most ambitious, exciting and innovative series of exhibitions. The main focus of the festival centres around the Director’s Programme, which seeks to connect artists and their work thematically by considering feminist practices, industrial legacies – chiefly those in relation to Glasgow – and an analysis of contemporary practice in the arts. Sarah McCrory, the festival’s director, must take a significant amount of praise for the organisation and selection involved in this impressive festival that sees both group and solo exhibitions dotted throughout the city.

It has been a positive and progressive year so far for British women in the art world. With Frances Morris’s appointment as the new director of Tate Modern, it marks a shift in focus to female and non-European artists in the British contemporary art scene. As Morris takes over the reins of an old power station, McCrory takes the reins, temporarily, of Tramway, a former tram depot that is now one of Glasgow’s largest contemporary visual and performing arts venues.

Since the city’s wealth derives historically from industry, shipbuilding, metalworks and textiles, McCrory decided to use Tramway as a space to reflect these aspects of Glasgow’s industrial heritage through a group exhibition. Like Morris, McCrory also displays a preference for female and non-European artists and this is demonstrated perfectly at Tramway. In Gallery 1, US artist Amie Siegel (b1974) screens her beautifully cinematic film Provenance (2013) that deals with the sociology of design and material culture. The film follows the history of a particular set of Le Corbusier-inspired modernist furniture designed and produced in the Indian city of Chandigarh. The historical documentation of the provenance of the furniture begins in the present, in the apartments of avid European collectors, and tells the history of the furniture’s movements backwards, with the film ending in Chandigarh.

Gallery 2 hosts three artists responding to Glasgow’s industrial heritage with three very different installations. Lawrence Lek’s (b1982) commission for Tramway, called QE3 (2016), sees the London-based, German-born artist use simulation and video game software to construct a reimagining of the final voyage of the Queen Elizabeth 2 (QE2) as it returns to the place where it was constructed and is then converted by an anonymous Glaswegian artist / philanthropist into the new home for the Glasgow School of Art. Housing the presentation of this digitalised reconstruction is an industrial structure designed by Turner Prize-winning Glaswegian artist Martin Boyce (b1967). The structure acts almost as a partition between Lek’s virtual world and the physical reality of Sheila Hicks’s textile-based installation entitled Mighty Mathilde and Her Consort (2016). Hicks was born in 1934 Hastings, Nebraska, and now lives and works in New York and Paris. Her multicoloured fabric sculptural offering is arguably the most eye-catching and memorable of the entire festival, if not for its uplifting choice of colour, then for its sheer scale.

Elsewhere in Gallery 2, the visitor will meander through German artist Alexandra Bircken’s (b1967, Cologne) site-specific commissions Trolley I & Trolley II (2016) and Combinations (2016). These seemingly mobile metal and textile structures comment directly on the architectural history of Tramway as they are designed specifically to fit within the tram tracks that still remain in the floor. New York-based Mika Rottenberg (b1976, Buenos Aires) adds the final piece to the Tramway jigsaw puzzle in Gallery 5 with her film installations NoNoseKnows (2015) and Squeeze (2010), which address her interest in modern consumer society through an inspection of the mechanisms that create objects of value. These two thought-provoking and visually stunning films draw parallels between the processes of mass production and art production.

Elsewhere in the city, German-based Cosima von Bonin (b1962, Mombasa, Kenya) and Tessa Lynch (b1984), who works in Glasgow, continue to address the festivals themes at the Gallery of Modern Art (GoMA). By using the beach as a metaphor for pleasure and the deep sea as a representation of fear and the unknown, Von Bonin places toy sea creatures throughout the space to bring out discussion about the human condition through an appropriation of pop culture motifs. Wider themes of gender inequality and consumerism are suggested. Upstairs in GoMA, Lynch uses everyday objects, such as backpacks, to draw focus to the mundane and daily rituals.

Aside from the Director’s Programme, there are many solo exhibitions offering up their own topics for discussion. The most satisfying experience in the festival belongs to Canadian artist Tamara Henderson’s (b1982) show at Mitchell Library entitled Seasons End. Littered throughout venue’s main hall are Henderson’s assemblage constructs made up of various materials she has found and collected on her travels. The majority of the sculptures on show resemble ritualistic totems that reflect the seasons and echo the figures and clothing found in ancient Japanese theatre (that was also appropriated by David Byrne of Talking Heads for his famous “big suit” during the band’s Stop Making Sense concert film made in 1984). The whole setting of the exhibition is incredibly Mad Max-esque, with this most reflected in her piece Seasons End (2016) – an immobile car that Henderson has built, complete with a projector in the front displaying moving images of the desert. The artist’s impressive assemblage constructions, through ritualistic aesthetics, conjure up themes of escape and the primal.

Glasgow International 2016 also acts as the first time exhibiting in Scotland and Britain for many artists this year. In her first exhibition in Scotland, widely acclaimed multimedia artist Pilvi Takala (b1981, Helsinki, Finland) presents old and new works at the Centre for Contemporary Arts. The voyeuristic videos of the artist, who now lives and works in Berlin and Istanbul, document curious realities, ranging from communities of poker players in Thailand to shopping mall culture in The Netherlands.

A personal highlight, however, has to be stumbling upon Derrick Alexis Coard’s (b1981) debut British show at Project Ability. Coard is affiliated with New York’s Healing Arts Initiative (HAI), a centre that works with adult artists with mental illness and developmental disabilities. The artist’s disarmingly bold and beautiful paintings are a series of imagined portraits of bearded black men. Coard has said that he uses “bearded black men as a symbolic expression for possible change in the African American community” and that his work is “a form of testimonial where black men can be seen in a more positive and righteous light”. Coard’s future is as bright as his work and, in many ways, captures the progressive and positive chord that the entire festival has struck. 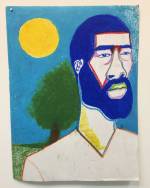 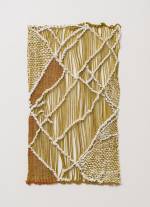 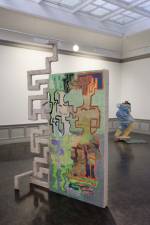