Prepare for a sensory bombardment in this sprawling exhibition, which examines the concept of surface, moving from an idea of the universe as a protective surface around us to examining notions of permanence, superficiality and digital culture

Walking into the Secret Surface exhibition at the KW Institute for Contemporary Art, Berlin, is an immediate sensory explosion. Push through a dark curtain, and you emerge blinking into a dark space lit by a huge, elemental orange sun, glimmering against a black background: Katharina Sieverding’s projection Die Sonne Um Mitternacht Schauen, SDO/NASA (Looking at the Sun at Midnight), 2011-12, which uses high-resolution Nasa images to create a dramatic, up-close image of the sun’s surface. On its other side, the dark wall is papered with twinkling stars interspersed with alien, googly eyes – Andy Holden’s wall installation Obsession (2016). In a film showing on an adjacent wall, a silhouetted lemon is slowly illuminated, turning red then brightening to luminescent yellow under a light that accentuates its pitted surface: Hollis Frampton’s Lemon (1969), a radical still life. This sprawling group exhibition examines the concept of surface, moving from an idea of the universe as a protective surface around us, expounded in this room, entitled Beneath the Firmament, to examining notions of permanence, superficiality and digital culture.

In a hidden room beneath a staircase – the space is immense and labyrinthine – shows Turner Prize-winner Elizabeth Price’s film Sunlight, in which disembodied heels click on a vinyl record, whose spinning mirrors the shape of Sieverding’s sun. Archive images of the sun flash, while blinking text connects the frantic imagery: “The sun does not have a surface,” it reads at one point, “but more like a sea several hundred kilometres deep in which there are storms all around the sunspots”. The hidden marvels of nature’s surfaces are referenced also in Anna Barham’s video -52NTHJT3K8 (2015), which shows the skin of a squid squirming and transforming under light and touch, developing what look like leopard spots under the stroke of a finger. Meanwhile, in Beth Collar’s video Island of the Dead (2014), a figure points at an island landmass against the horizon, anxiously repeating: “That’s where all the dead go.” A running theme of the exhibition is the idea of infinity, and the boundaries of human existence – beyond the surface, Collar suggests, there is nothing.

The concept of emptiness recurs throughout the works on show. Eduardo Basualdo’s The End of Ending (2012) is a terrifying surprise: a whole room is filled with a solid black mass, asteroid-like, which forces the viewer to stand up close, stare right at the surface as if confronting their own mortality. The faintly apocalyptic theme continues with Prem Sahib’s Those Soaked, in which resin dewdrops run down gold panels as though the work itself is sweating, and a marble surfboard made by Reena Spaulings (Mollusk, 2012), which leans against a wall, a louche impersonation of a fossilised relic of our world, a curiosity for future species. A video on the wall by Philippe Parreno, With a Rhythmic Instinction to Be Able to Travel Beyond Existing Forces of Life (Yellow, Rule #2), 2014, has a computer game aesthetic: while lemon and lime spots float across the surface, linocut-like insect forms flash on to the screen in black and white, like drawings from ancient taxonomy handbooks: a disquieting juxtaposition of the timeless and the uncanny.

Upstairs, Lawrence Lek’s video-game simulation Berlin Mirror (2042 Retrospective), 2016, the most captivating piece in the exhibition, continues the theme of futuristic dystopia. This site-specific work allows the player to explore the urban sprawl of ruined Berlin, negotiating the bleak cityscape, before moving into a familiar space – the KW courtyard itself. The player progresses through the gallery, and into the very room we are in, the graphics still playing on the wall. Lek works in “simulation sculpture”, creating versions of real places and allowing the viewer to experience them actively, immersed in an environment that is at once alien and highly realistic. The KW Institute for Contemporary Art was founded in the early 1990s, soon after the fall of the Berlin Wall, in a derelict former margarine factory, and is now a celebrated international centre for contemporary art: Lek’s playful and compelling work is a tribute to, and monument for, the institution itself.

The final two rooms explore cultish images of technology, the fetishisation of commodities and our media-influenced relationships to ourselves and to others. A pair of Mark Leckey’s works, entitled Living Within the Ecstasy of Always, is a highlight. In the video Bursting Forth (2015), a man in dark glasses and a spotted sunhat stares at the camera in a state of shock. Only his eyes move, flickering from side to side in wonder as the camera gradually closes in on his face, the image changing colour as he blinks in confusion. On the wall, the print The Half-tone Ecstasy of Always Bursting Forth (2015) reveals more of the scene – the man is kneeling on the street wearing a spotted dress and kitchen gloves. This surreal quality is mirrored in several of the works, which interrogate technology’s effect on the 21st-century psyche. In Ying Miao’s App-Nosis (2013-14), tripod-like tents of stainless-steel hold iPhones in their tendrils, resting on fake grass-covered in cushions printed with grass patterns, strange fingers raking through the fronds to grasp their devices. Nearby is the bizarre Landscape.gif (2013) by the same artist, in which several depictions of computer-graphic landscapes judder incessantly between frames. The Apple logo floats insidiously in the sky or is reflected in the water, surrounded by internet memes and anime characters.

Several works choose to play with the figure of the human body: Alex Israel’s Self-Portrait (Wetsuit), 2015, portrays a strangely alien version of the human figure in lava-red, while a strange suit printed with the form of a body hangs crumpled on the wall, a shrugged-off self; in this technologically charged space, we are encouraged to reflect on the hyper-performative nature of social media existence. On the adjacent wall, collective Auto Italia’s video My Skin Is at War with a World of Data (2012) uses the stock imagery of beauty advertisements to demonstrate how media coercively affect the way we perceive ourselves, and experience our own bodies. Elsewhere, in a series of multimedia works by the young artist Philipp Timischl, cut-out images of models strut with screens at their feet, featuring footage of fast-moving experiences: old fashioned dodgems, dancers, divers, with brand logos always in sight: Apple, Microsoft, Red Bull. These rooms are an exhausting experience, the viewer constantly bombarded with flashing information: it is a visual relief to come across Philipp Lachenmann’s Grey Studies, light-jet prints in which people play in the sea, hazy in the fog as sea and sky blend in relaxing shades of grey – and no screens in sight.

A final room, bare but for a white sofa – Frances Stark’s installation Observate, Leggete Con Me (2012) – plays calming classical music while an increasingly manic dialogue in text-speak is projected on to the soft-pink walls; it is another innovative and immersive use of surfaces, which encapsulates the creativity of the exhibition’s curation. While rather over-saturated, the exhibition is a fascinating tour through digital art in particular, exploring themes of desire, consumerism and meaning itself. The exhibition is complemented by a programme of performances, and Sunrise Sunset on 30 April is set to dazzle: artists including Auto Italia and Lek will present performances over 12 hours throughout the gallery, animating the artworks, inviting participation and further blurring the boundaries between virtual and physical spaces. 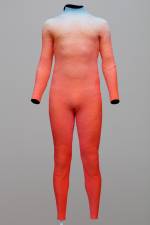 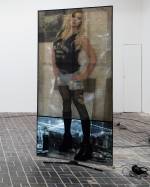